Residents in Mon State say drug use among young people is getting worse and a programme led by the New Mon State Party aimed at combatting drug abuse is facing capacity constraints.

IN THE second week of December, Ah Tit was arrested while riding his motorbike past a checkpoint in Mudon Township, Mon State, manned by soldiers from the Mon National Liberation Army, the armed wing of the New Mon State Party.

MNLA soldiers had been tipped off that Ah Tit, a well-known drug user and dealer in the local community, was carrying methamphetamine pills, also known as yaba.

Before his arrest, Ah Tit’s wife had grown increasingly scared of her husband’s erratic behaviour, according to Nai Bayar, a community leader in Mudon Township.

Nai Bayar told Frontier that Ah Tit would sometimes threaten to kill his wife if she did not give him money for his drug fix. He once threw a large rock at her, only narrowly missing. 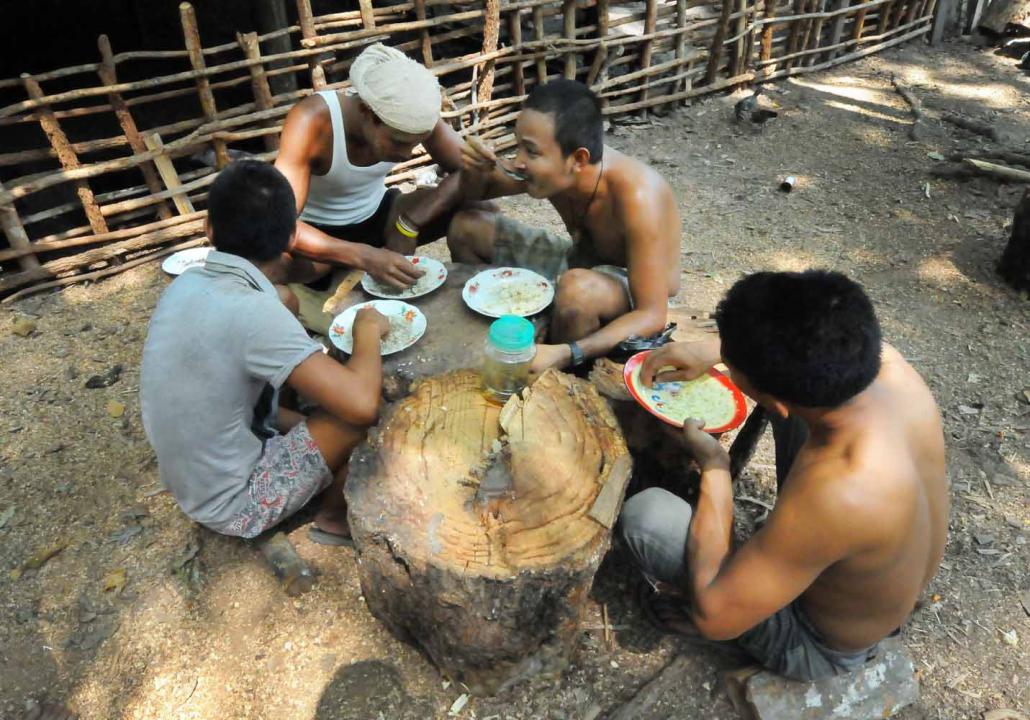 His wife had become so scared that she hoped the MNLA soldiers would detain him for a long time, Nai Bayar said. As part of the MNLA’s drug policy, he will now have to spend three months in a rehabilitation camp.

“She came to me sometimes and asked for my help to inform the [MNLA soldiers], but I was afraid of his father. That is why I could not help,” Nai Bayar said.

In late December, Ah Tit’s friend and fellow drug user Ah Pyaing became crazed while high on yaba. He stood at the water well in Kalawthut village with a knife, threatening to kill anyone who tried to take water from it. He also tried to force his mother to hand over ownership of her house to him, but she refused.

“We planned to inform the police, but he ran away when he heard that the police were being called,” said Nai Si, a resident in Kalawthut village.

Residents in Mon State say the number of drug related incidents are on the rise. In Wong Rai village, Thanbyuzayat Township, one methamphetamine user reportedly stabbed five people to death last year before being killed by the police.

Community members are concerned that drug use is spiralling out of control and that it could have serious effects on the future of younger Mon.

In Mon State, it is common for villagers to build a public resthouse where elderly people can go as they wait to donate food to monks early in the morning. Villagers told Frontier that drug users regularly stay in the houses overnight, playing loud music and generally causing a disturbance.

In the morning, villagers say they often find drug paraphernalia littered around the houses.

One tradition in Mon State is for neighbours to help each other before holding a party, by cooking food or preparing a house. The hosts offer food and drink in exchange for the help, but residents say it is becoming more common for people to instead request drugs.

Theft by drug users is also an issue. Nai Nga, a rubber farmer in Mudon Township, recently had his motorbike stolen by what he believes were drug users.

“Let them take this cheap one if they want,” he said, kicking the back tyre of an old replacement he had bought.

Many drugs are cheap and easy to find in Mon State, where a yaba pill typically costs about K5,000.

In 2013, the Human Rights Foundation of Monland interviewed 140 people in 10 Mon communities in Mon and Kayin states. The survey concluded that 38 percent of young people interviewed were drug users, with yabba being the most popular drug followed by kratom leaf, a mild stimulant.

“Most youths are not interested in studying. They don’t seem to be interested in any activities,” said Chit Ong, a mother of two sons from Kalawthut village, one of who is a methamphetamine addict.

“I have tried to get him to join other activities, but he is not interested,” she said of her son, adding that she was planning to move from her village to Mudon town as she believes there are less drugs available there.

“We need to take action against those who sell [drugs]. If we do not take action, we will have many problems,” she said. 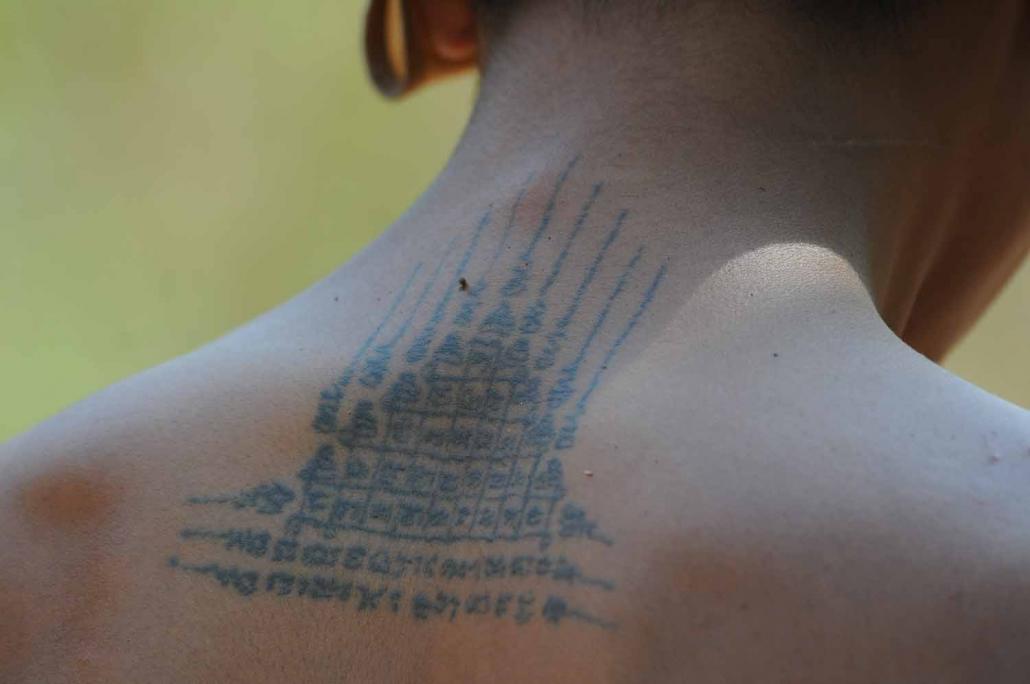 As the drug problem worsened in the state, in 2012 the NMSP established an anti-drug special force. The taskforce relies on tips from people in the community and those arrested for taking drugs spend three months in a camp. Those found to be dealing drugs face sentences of between one and five years. 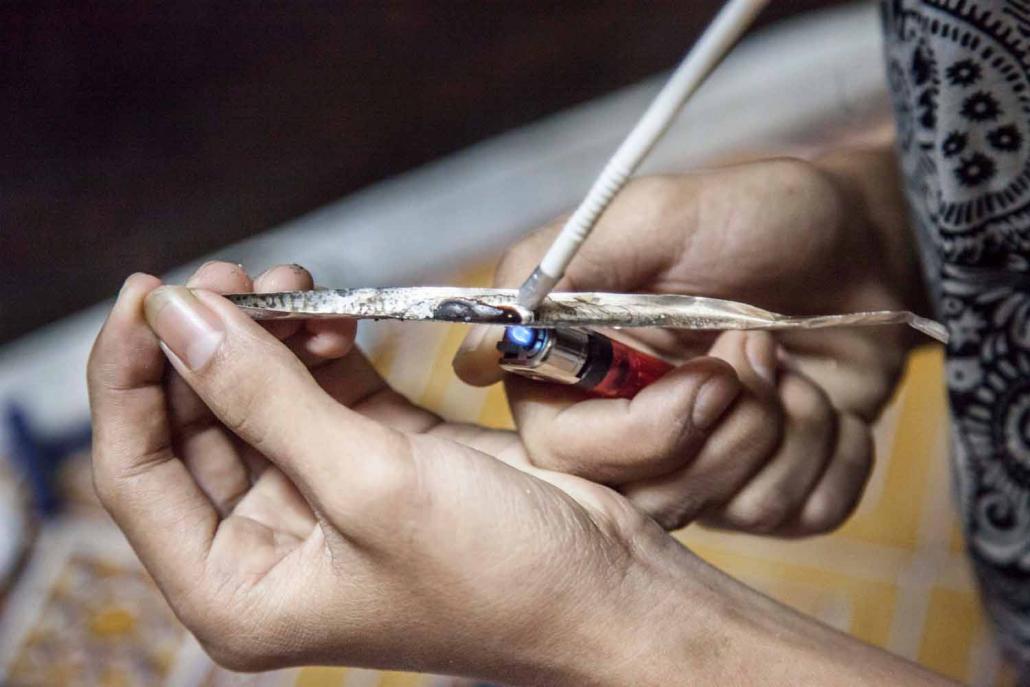 Residents say that drug use among young people is a growing problem in Mon State, with methamphetamine pills – also known as yaba – the most widely used drug. (Theint Mon Soe — J / Frontier)

However, the move has caused some tension between the government and the NMSP, which was not one of the signatories to the so-called Nationwide Ceasefire Agreement with the U Thein Sein government in October 2015 but did sign a state-level ceasefire with the government in February 2012.

People can also bring friends or family members who are addicts to the camps, where they will get help with their rehabilitation but will not face punishment.

Nai Yar Zar, chairman of the NMSP’s Kyainseikgyi branch in neighbouring Kayin State, said the camps are a big burden because the party does not receive help from other organisations.

“There are some families who have brought their children to us, and we are happy to help them, but one problem is that we have poor facilities,” he said. “The other problem is that it is a big burden for us to take care of them.”