YANGON — On a recent April morning, Aung Kyaw Soe got off the bus near the University of West-Yangon after spending some 2 hours in traffic to reach the campus located on the city’s outskirts.

“When we take the public bus to the university we break out in a sweat and are not fresh to begin teaching,” complained the Botany Department lecturer.

Like many universities and colleges built under Myanmar’s former military regime, the University of West-Yangon was constructed in a remote part of town and lacks on-campus student housing – part of a deliberate effort by the junta to curtail potential student mobilisation.

Not only is the complex on the border of Shwepyithar and Hlaing Tharyar townships hard to reach, it’s not an inviting place to study either. Situated next to paddy fields, it can only be entered through a large gate controlled by security guards. Inside, university buildings are rundown and spaces are empty and treeless.

“I feel the university is like a prison. Transportation here is very difficult and the campus environment does not feel free or pleasant. You can see many students during the time of exams, but other times few students are here,” said Ye Myat Hein, a 26-year-old, first year History major.

Decades of brutal military rule destroyed Myanmar’s higher education system. Funding was kept to a minimum, rote memorisation and not critical thinking became the most important teaching method, and distance learning – whereby students took books home and only showed up for exams – was promoted to avoid students from associating. Student unions were banned and authorities ended the universities’ independence.

From 1988 to 2010, authorities ordered 10 universities built on Yangon’s fringes, creating desolate, remote campuses. Programs at the large, once-prestigious University of Yangon – long a hotbed of resistance against the army – were drastically cut down.

Two-thirds of Myanmar’s 169 higher education institutions were brought directly under the ministries that correspond to their fields of study, with health studies coming under the Ministry of Health, for example.

The National League for Democracy (NLD) has long said that education reform is a top priority. The new government of President Htin Kyaw and his Minister of Education Myo Thein Gyi (the former rector of West-Yangon University) are now faced with the daunting task of rebuilding a higher education system that until the 1962 army coup was considered among the best in Asia.

“The NLD wants to ensure our bachelor degrees are on the same (quality) level as the rest of ASEAN,” said NLD MP Tin Aung, chairman of Lower House’s Education Promotion Committee.

Under President Thein Sein’s quasi-civilian government there were limited education reforms and spending was slowly increased to 11 percent of the state budget in the 2015/2016 fiscal year.

The government tolerated on-campus activities of students, such as the unofficial formation of students’ and teachers’ associations. Yangon University was to allowed to restore its programs in 2013 and started collaborative arrangements for research, faculty training and curriculum development with a number of foreign universities, including Oxford University in the United Kingdom.

Tin Aung said some of the first reform measures under the new NLD government would include trying to hire better-qualified teachers and improving study and teaching resources, such as libraries and laboratories. “But these steps require more budget,” he said.

Myanmar Now repeatedly contacted the Ministry of Education to inquire about its reform plans, but officials said they were too busy to speak to the media.

Min Thein, from the National Network for Education Reform (NNER), a coalition of NGOs and education experts, said the quality of teaching fell during army rule because “Promotion was decided based on the loyalty of staff. As a result, the teaching staff became persons of total obedience.”

Saw Myo Min Thu, executive director of the Thabyay Foundation, which assists students with scholarship applications, said there are currently some 600,000 students in the country, two-thirds of whom follow the distance-learning method.

He said the latter teaching method should be ceased, adding that the current system of allowing students entry to certain university studies based on their overall matriculation exam scores should be also be reformed. 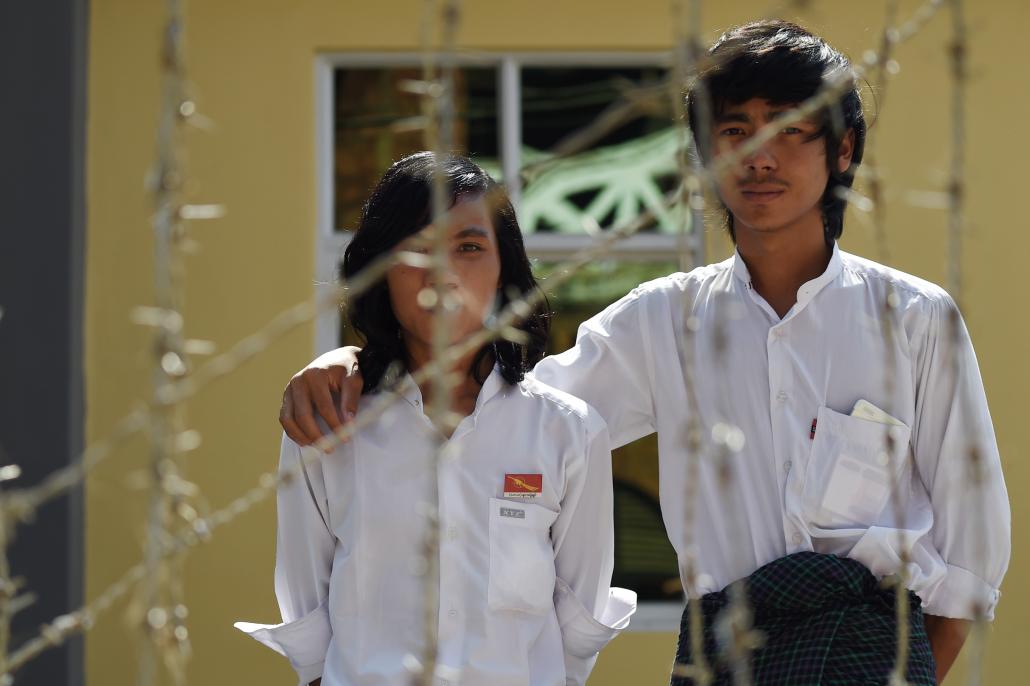 Ma Myo Htet Paing, left, and Ko Lwin Ko Ko Aung, both 20, stand behind a barbed wire fence outside the court house in Thayawady town before their trial for participating in the National Education Law protest in Letpadan. (Romeo Gacad / AFP)

In recent years, student unions have reasserted themselves and demanded a jump in education spending and a host of other higher education reforms, including restoring universities’ independence. NNER has also advocated comprehensive reforms for basic and higher education.

When the previous government and Parliament, with support of NLD MPs, adopted the National Education Law in September 2014 without considering these demands, students revolted. They organised protest marches across the country, which ended with a violent police crackdown in Letpadan, Bago Region in March, 2015. Dozens of students were jailed for months, but all were released by the NLD government in a recent amnesty.

Min Thwe Thit, a formerly imprisoned leader of the All Burma Federation of Student Unions (ABFSU), said the group sent a letter to the new government to request a meeting to discuss the students’ demands for significant amendments to the National Education Law and the drafting of new by-laws.

He said student organisations were waiting for the government to announce its plans for education reform before deciding their next step. An increase in spending would be key, he said, adding, “There are no adequate resources in the universities. The government needs to fix that.”

Asked if the NLD would take on students’ reform demands or consider overhauling the controversial Education Law, Tin Aung said, “This committee does not intend to repeal of the National Education Law because we want to use it for now, in the future this law must be reformed, that would take time.”

He went on to state that the NLD planned to introduce by-laws for the National Education Law that would allow the formation of student and teachers unions and grant universities independence from the Ministry of Education.

On the problem of the poor location of many higher education institutions, he said, “In Mandalay, the regional government is helping to create affordable transport for students and staff to go to universities there. We hope more regional governments will take such measures to help students.”

Until higher education reforms take effect and funding increases, however, the quality of education will remain poor, said Aung Kyaw Soe, who has taught Botany at West-Yangon University for 14 years.

“Now, a single microscope in the laboratory is used by 20 students at the same time. Many graduates could not even learn how to adjust a microscope. And if the apparatus is damaged, we have to compensate for it ourselves,” he said.

This article was originally published by Myanmar Now. Title photo: A student leader at Mandalay’s Yadanabon University gives a speech during a protest against the National Education Law in January 2015. (Photo: Zaw Zaw / Myanmar Now)