Plastic products are both a convenience and a curse but some innovative businesses in Yangon are striving to reduce their impact on the environment.

FROM THE packaging of food to the outfitting of cars, plastic is essential to modern life. Its use accelerated rapidly after World War One, though the first man-made plastic material, Parkesine, was patented in Britain in the 1850s. The growth in the use of the tough, durable – and often disposable – product has made plastic a major polluter of land, waterways and oceans. As cities develop and grow, plastic can pose a major threat to the environment, especially in developing countries that lack effective recycling or waste management schemes, and Myanmar is no exception.

The scale of the threat was highlighted in a survey released last July by British conservation group Fauna & Flora International and Yangon-based Thant Myanmar, which campaigns to reduce plastic pollution. The survey, conducted between December 2018 and June 2019, found that about 119 tonnes of plastic waste was entering the Ayeyarwady River every day, putting it among the top 20 most polluted rivers in the world. Within the river basin, the largest amount of waste, at 32 tonnes a day, came from Ayeyarwady Region, followed by Yangon Region with 29 tonnes. Inadequate or non-existent waste management in villages and towns along the river is a major contributor to plastic pollution, as is careless littering.

Flooding in Yangon caused by drains or canals clogged by discarded plastic bags and drinking water bottles has become increasingly common. People living beside the Yangon River in places like Dala Township, across the river from the downtown area, dread the unsightly mess that tidal movements bring to their doorsteps every day. Plastic bags and other waste are also the bane of fishers who rely on waterways for a living. U Myo Than, from Dala, has been fishing in the Yangon River for decades and said the waste, “especially the plastic bags, always gets in the nets and it takes a lot of time and careful effort to remove them without also destroying the nets”.

The problem is worse during the rainy season, he told Frontier. “When the water is flowing faster and there is more plastic than usual, I clean the nets every two or three days because doing it more often is too tiring,” he said. Plastic waste, including micro-plastics, also threatens wildlife and biodiversity conservation. “I have seen ducks in the delta regions mistake pieces of plastic for food and be suffocated,” said U Thaw Phyoe Shwe, from Biodiversity and Nature Conservation Association (BANCA) Birdlife Myanmar. He said one of the NGO’s conservation activities is providing waste management training to villagers in delta areas to help minimise the threat to birds and other wildlife. 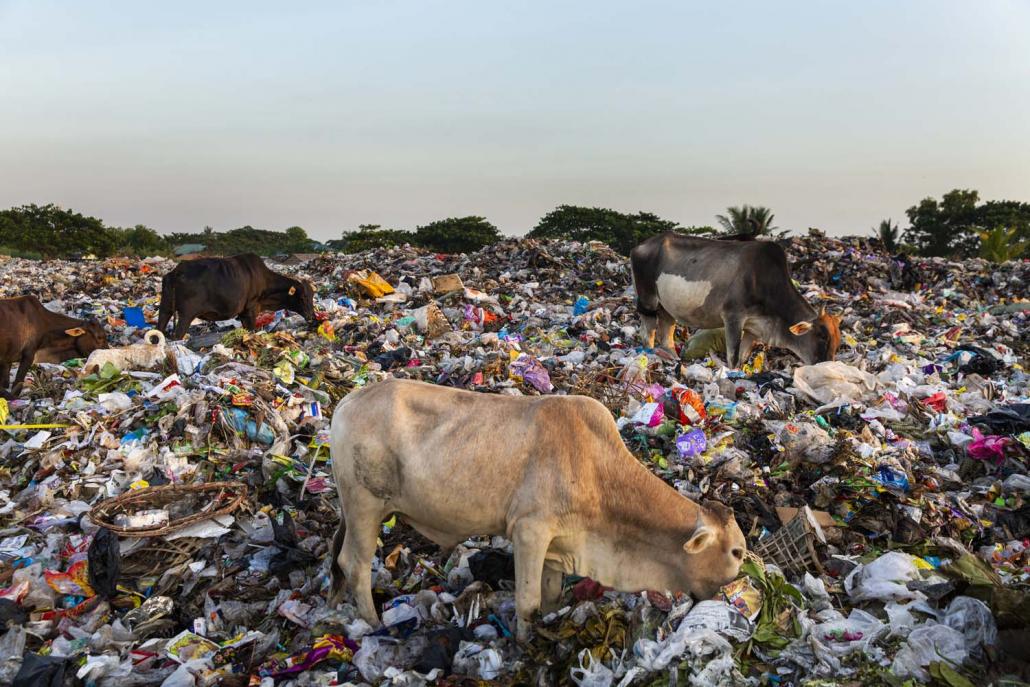 A plastic collector at a rubbish dump in Dala carries a bag filled with bottles to be sold for recycling. (Hkun Lat | Frontier)

Where does the waste go?

Dr Aung Myint Maw, deputy head of the Pollution Control and Cleansing Department of the Yangon City Development Committee, Yangon’s municipal authority, told Frontier that plastic makes up around 12pc of solid waste produced in the city, according to data gathered by YCDC this year.

The largest component is still organic waste, at about 60pc, he said, though plastic waste is increasing both in quantity and as a share of the whole, having risen from just below 10pc in 2015.

Although there is a campaign in Yangon aimed at encouraging residents to sort their waste into colour-coded bags according to whether it is wet or dry before they dispose of it for collection by the YCDC, it is largely ignored. Most of the city’s residents dispose of their waste in one big plastic bag and dump it in big roadside bins that are emptied nightly.

A ward administrator responsible for Anawrahta Road between Shwe Bon Thar and Shwedagon Pagoda roads in Pabedan Township, who asked not to be named because he was not authorised to speak to the media, said that as well as not being sorted according to whether it was wet or dry, no distinction was made between biodegradable and non-biodegradable waste. 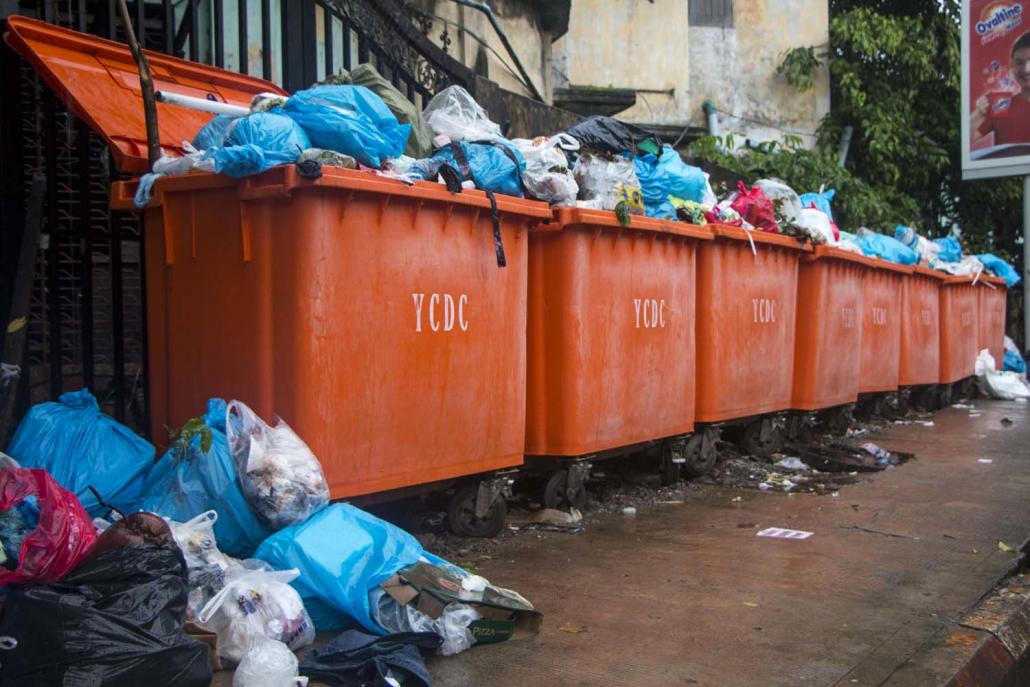 YCDC staff begin collecting waste and cleaning the streets at about 8pm, finishing between 3am and 4am, when the rubbish collection trucks leave for the sprawling Htein Bin dump that covers 98 hectares (244 acres) in outer northwestern Hlaing Tharyar Township.

Some sorting takes place at Htein Bin, with non-biodegradable waste compressed by machines to create space for more waste, but biodegradable matter is left to perish. Htein Bin is likely to reach capacity in about three years, when Yangon will need a new dump site, Ko “Inda” Aung Soe, from Bokashi Myanmar, told a “We the City” panel discussion in Yangon in September.

Aung Soe is one of three co-founders of Bokashi Myanmar Co Ltd, which was established in Yangon in March 2019, and says it runs the country’s first farm that transforms food and other organic waste into rich, fertile compost, in outer northeastern North Dagon Township. 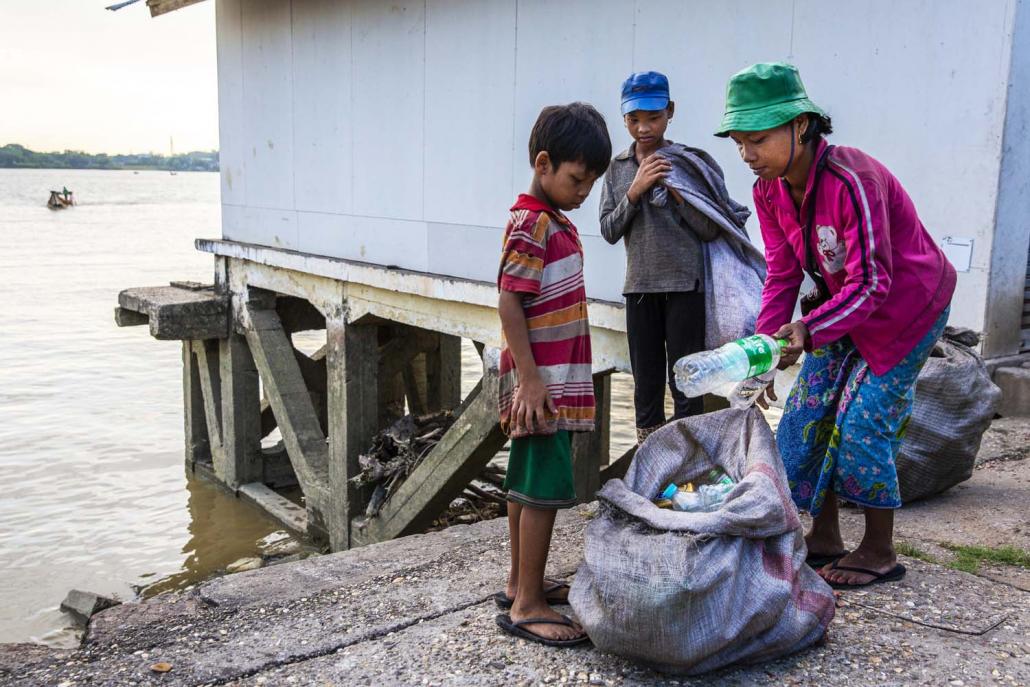 A small number of innovative, pragmatic businesses are helping to tackle the scourge of plastic pollution in Yangon. They include Myanmar Recycles, established in 2017 by expatriates Ms Mimi Wu and her partner, Mr Henry Cox, and RecyGlo, founded the same year by Ma Shwe Yamin Oo and her associates.

The company collects, sorts and washes used plastic bags and melts them down into small pellets that can be used to make plastic products. The used plastic bags are contaminated with all kinds of household waste, so would not otherwise be re-used, Wu told Frontier in an interview at the factory.

The company recently recieved funding from Myanmar-based investment firm Andaman Capital Partners to acquire more recycling equiment, which will help it to process more plastic. The investment sum has not been disclosed. 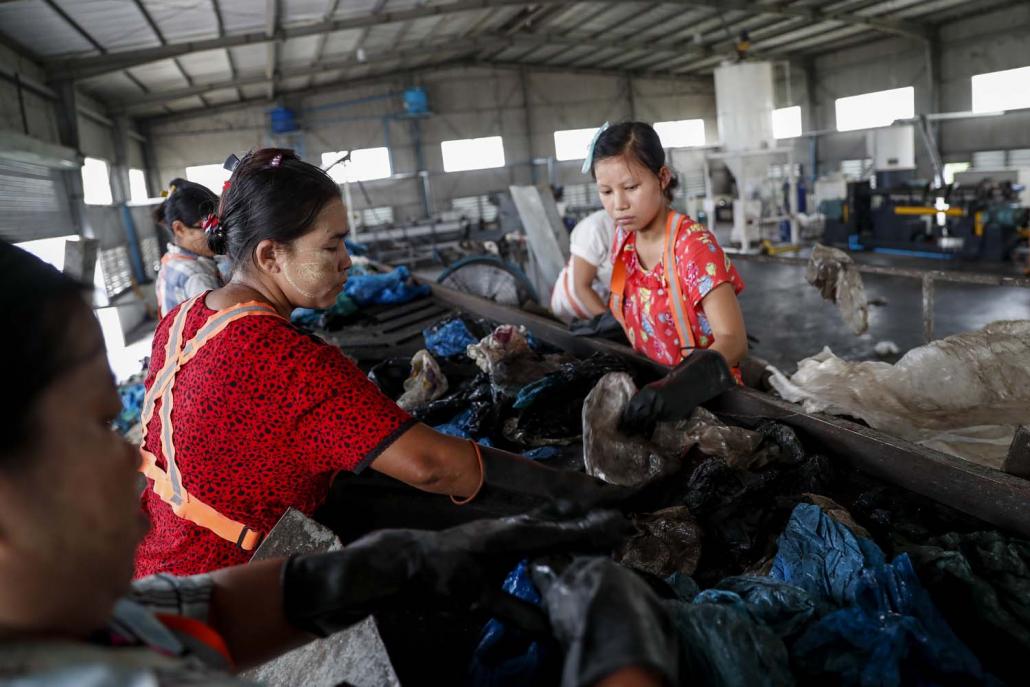 Myanmar Recycles collects, sorts and washes used plastic bags, before melting them down into small pellets that can be used to make plastic products. (Nyein Su Wai Kyaw Soe | Frontier)

RecyGlo, one of only two recycling businesses featured on the Yangon Directory, sorts waste from more than 40 clients, which include hotels and United Nations agencies, and directs it across a network of small factories that recycle different kinds of waste, including plastic. It received US$150,000 in seed funding last year from a Norwegian investment fund, Katapult Ocean.

Recyglo co-founder Ko Okka Phyo Maung told Frontier the company has recycled over 1,000 tonnes of waste since it began. This is less than half the total waste Yangon produces in a day. If private businesses like RecyGlo and Myanmar Recycles are to grow and multiply, and make meaningful strides in reducing plastic pollution, the business of recycling needs to be commercially viable.

Wu said this is hard to sustain given that companies like theirs must meet the expense of sourcing rubbish, without government support.

“Some governments in the world, such as in Europe, pay recyclers to take waste to recycle,” said Wu. The opposite applied in Myanmar: “Sometimes it’s quite a lot of money to get the product, which is unfortunate because we are here to help do a service for the country.”

Wu said Myanmar Recycles buys plastic waste directly from rubbish collectors. “I would really urge the government to consider how we should make recycling more viable,” she said.

Okka Phyo Maung agreed that recycling businesses deserved support from the government, either in the form of subsidies or collaboration. “We even have to rent trucks to transport waste to recycling sites,” he said.

“In any business, you need to make money to keep going. If it gets too expensive to recycle, it’s really going to dissuade a recycling industry from growing,” said Wu.