The Bogyoke’s cabinet: Unity in diversity

The composition of Bogyoke Aung San’s pre-independence cabinet was a reflection of his belief that prejudice and intolerance should have no place in an independent Burma.

LATE ON a Saturday morning 70 years ago, a seven-year-old first grader was summoned to the headmaster’s room at the Myoma National High School, now Basic Education High School 2 in Yangon’s Dagon Township.

Maung Tin Myint arrived at the room to find his sister already there. The headmaster ordered his staff to take them to their home. It was not far away, on Campbell Street, now Nga Htat Kyi Pagoda Road, which runs between Wingabar and Banyar Dala roads.

There was a big crowd at their home. Tin Myint’s mother, with tears in her eyes, told him to take his school bag upstairs and go and play with his friends.

As he was climbing the stairs, he heard a man talking on the phone and understood the reason for the crowd and his mother’s grief. 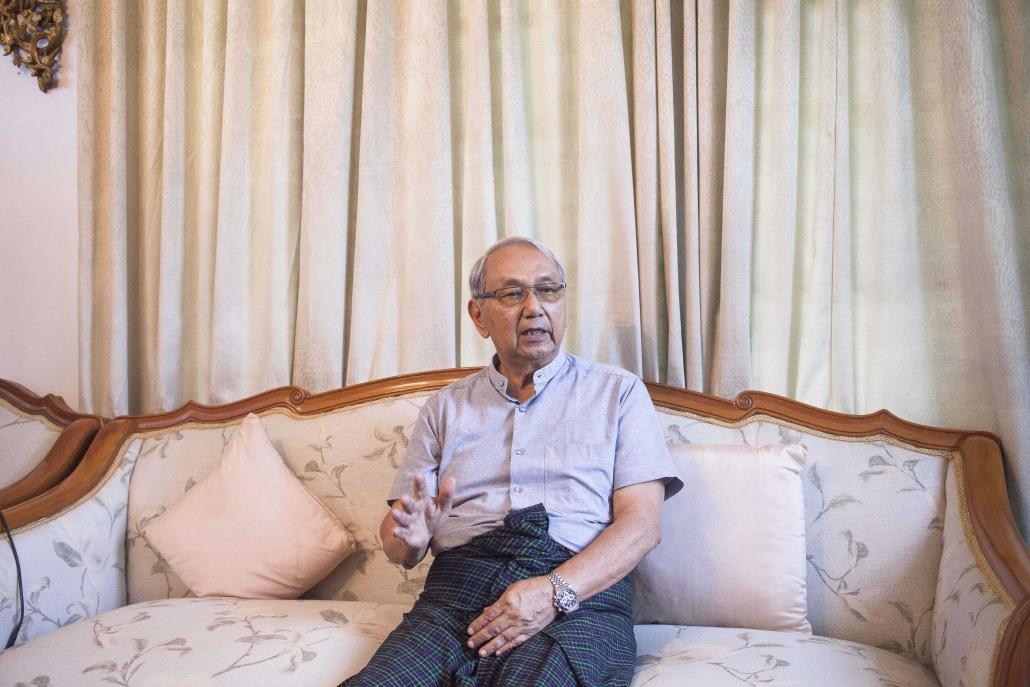 U Tin Myint speaks to Frontier at his home in Yangon. (Theint Mon Soe aka J | Frontier)

The man was discussing the assassination earlier that day of independence hero Bogyoke Aung San, six ministers of his cabinet, a secretary and a bodyguard at the Secretariat building in downtown Rangoon.

Tin Myint heard the man say that among the fallen was Sayagyi. It means “headmaster” and was the nickname of his father, U Razak, the Minister for Education and National Planning in the pre-independence cabinet and a former principal at the Mandalay National High School.

“I knew my father had died; I did not cry but I felt empty because of the sense of loss,” recalled Tin Myint, 77, in an interview with Frontier at his Yangon home on July 17.

Razak, who was born in Meiktila in Mandalay Region, was a patriot who was prominent in the struggle for independence and played a leading role in establishing the nationalist schools as a counter to the British colonial education system. Agitation over the education issue was a trigger for the first strike by students at Rangoon University in 1920, an event that continues to be celebrated as National Day, which is based on the Burmese calendar and falls this year on November 13. The Myoma National High School attended by Razak’s children was one of the first “nationalist” institutions.

Razak became a popular and highly respected member of the community in Mandalay after being appointed headmaster of the National High School there in 1921. He was a progressive teacher who encouraged his students to participate in extra-curricular activities, such as physical exercise and sport. Although a Muslim, he was renowned for his knowledge of Theravada Buddhism and of its scriptural language, Pali, which he taught to novice monks. He also encouraged the monks to learn English. 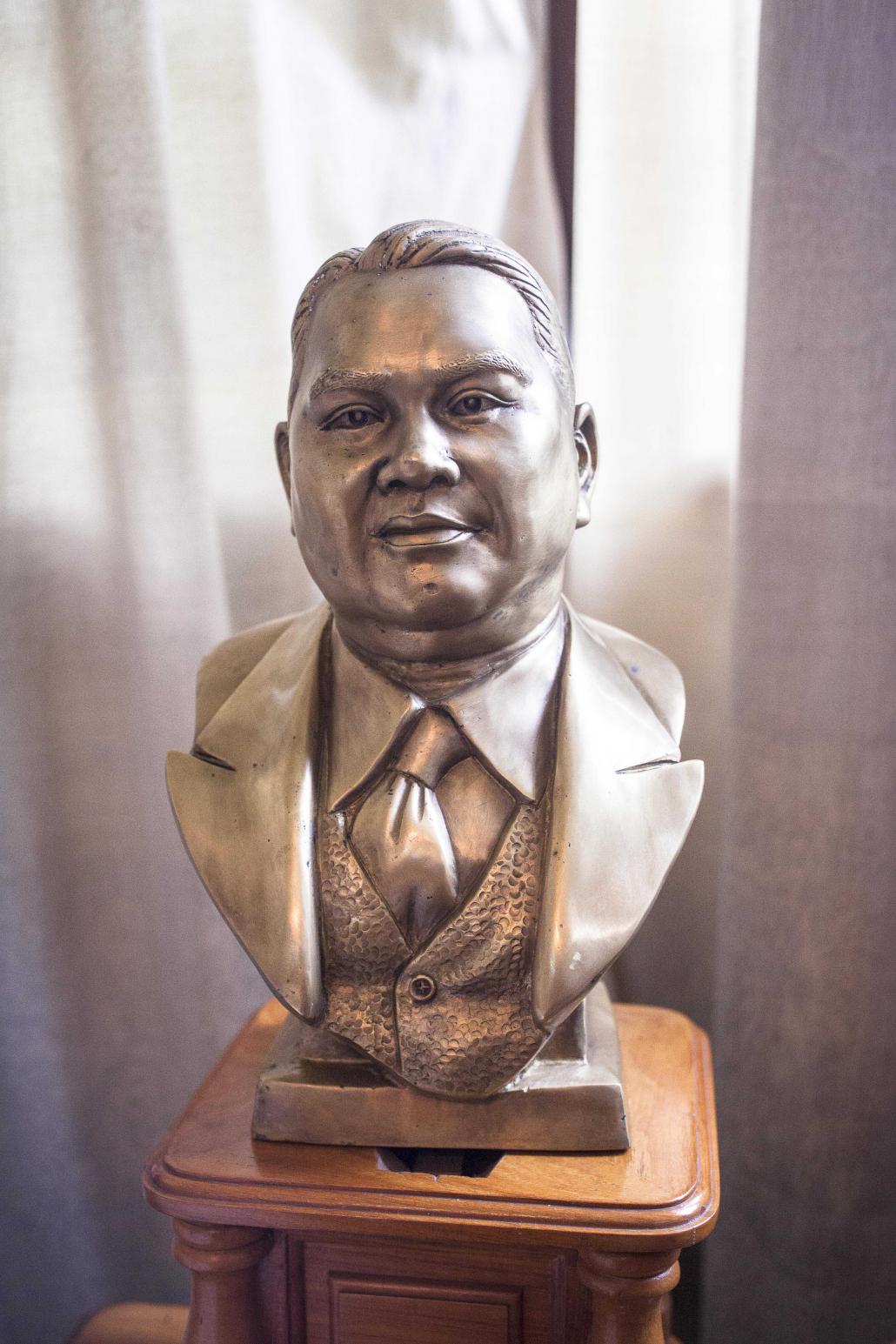 A bust of U Razak inside the Yangon home of his son, U Tin Myint. (Theint Mon Soe aka J | Frontier)

After World War II, when he was interned by the Japanese, Razak devoted more attention to the struggle for independence and became the leader in Mandalay of the Anti-Fascist People’s Freedom League, which Aung San had headed since early 1946. When the British colonial authorities asked Aung San to submit names for the executive council, Razak was proposed as the AFPFL representative for Upper Burma by Mandalay community organisations headed by monks.

In 1946, Razak and his family moved to Rangoon.

“Our house in Campbell Street was very near U Aung San’s house in Tower Lane [now Bogyoke Aung San Museum Road]. Sometimes U Aung San would call my father to his home for discussions; I accompanied him on one of those visits,” Tin Myint said.

“Bogyoke Aung San didn’t give priority to religion and race; he gave priority to the country and those around him had similar views,” Tin Myint said.

An example of Aung San’s belief in the need for inclusion was the Panglong Agreement, a formula for federalism he signed with Shan, Kachin and Chin leaders on February 12, 1947, an event celebrated since as Union Day.

Tin Myint said Aung San and those close to him were able to work cooperatively despite differences of religion, background and thinking because they were united in their vision for an independent Burma. “Their ambition was to gain independence as soon as possible and after that to rebuild the country,” he said.

Tin Myint’s assessment of the determination of Aung San and his cabinet to prioritise the cause of national unity is shared by the daughter of another martyr of July 19, 1947.

The leaders of 70 years ago were able to achieve harmony in diversity by overlooking such things as race and religion, said Nant Khin Htay Kyi Khaing, the daughter of Mahn Ba Khaing, a Kayin Christian who was Minister for Industry in the interim cabinet.

“A Kayin proverb says if there is unity, together we can scoop enough water to make the sea run dry,” said Khin Htay Kyi Khaing. 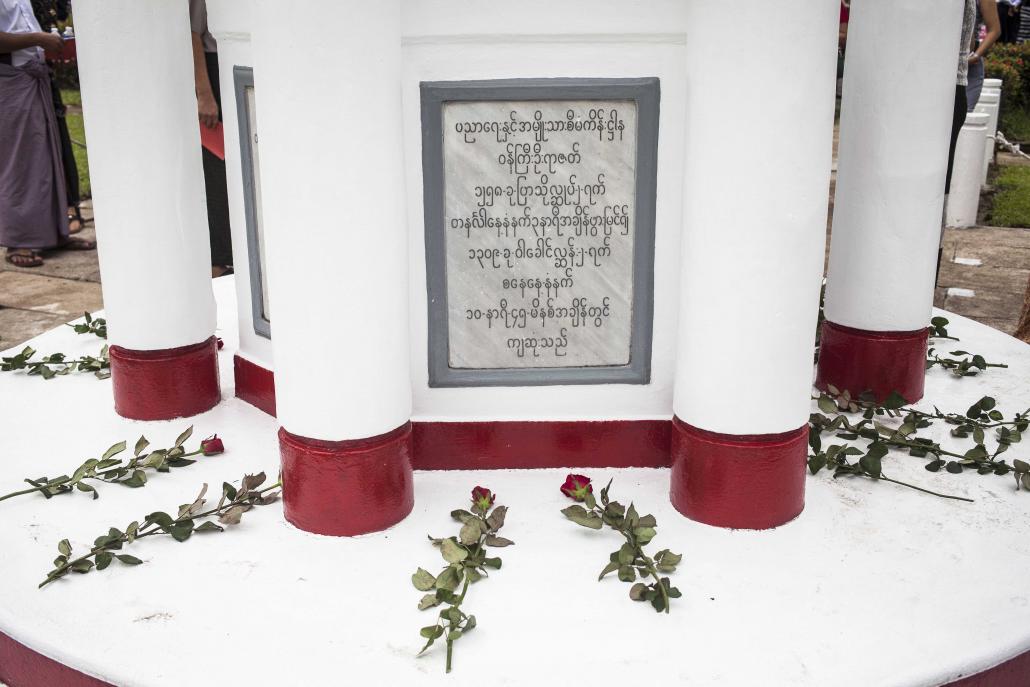 A memorial inside the Secretariat on the 70th anniversary of Martyrs’ Day. (Theint Mon Soe aka J | Frontier)

Aung San, who seemed to understand the threat that differences over religion and ethnicity could pose to national unity, had strongly rejected calls for any move towards declaring Buddhism the official state religion.

In August 1961, 14 years after Aung San’s untimely death, Prime Minister U Nu’s government passed legislation making Buddhism the official religion. Although the legislation was among the first to be repealed by General Ne Win after he seized power in 1962, it exacerbated tensions with minority groups, including the predominantly Christian Kachin.

The Tatmadaw and the Kachin Independence Army fought for decades until signing a ceasefire in February 1994 that collapsed in June 2011.

The emphasis on unity among diversity to which Aung San and his ministers aspired seems to have long vanished. In recent years, hardline Buddhist nationalists have even called for no respect to be shown on Martyrs’ Day to Razak and the bodyguard who died with him in the Secretariat, because they were both Muslims.