Most universities resisted calls by student unions to postpone examinations because of the threat posed by COVID-19, but that quickly changed after the first cases were confirmed in Myanmar.

ON March 17, six days after the World Health Organization declared the accelerating coronavirus crisis a pandemic, members of the Yangon University Student Union protested in support of an appeal to the institution’s authorities to postpone their annual examinations. The next day, YUSU and 23 other student unions made the same request in a letter to the Minister of Education, Dr Myo Thein Gyi.

The students, worried about the absence of guidelines for precautions against coronavirus in exam venues, received no response from the minister. However, there was a reaction on social media to images of the protest published in newspapers, with some accusing union members of being more focused on activism than their studies.

“We were the target of bad and rude comments and personal attacks,” said Ko Aung Kaung Satt, the YUSU communication officer. “We are very upset that people criticised our protest because its only objective was to raise awareness about a threat to the health of students,” he told Frontier.

Not all responses were critical of the justified concerns of student unions about the potential risk of COVID-19 spreading among students sitting exams in confined spaces.

YUSU was able to discuss the situation with the rector, Dr Phoe Khaung. Aung Kaung Satt said that the rector didn’t agree to postpone the exams, but said he would work towards a compromise.

“The rector said he could not completely postpone the exams without the agreement of Yangon University education committee, but he promised to be flexible with the procedure, and so we [students] were given the option of choosing to take the exam now or not,” he said.

Early on March 18, the Yangon University education committee announced on its Facebook page that there would be no change to the schedule for the exams, which began on March 18 and were due to finish on March 25, but said that students concerned about the coronavirus would be able to sit their tests at a later date if they wished.

Other universities did not respond to requests from students to postpone the exams, although at the time Myanmar was yet to confirm its first case of COVID-19.

Ko Kyaw Ko Ko, a second-year Chemistry student at Dagon University, said he did not see any precautions against the spread of COVID-19 in the examination room.

“I was afraid of being infected by COVID-19 during the exam, but I was more afraid of failing the exam,” he said. “The Ministry of Education did not postpone the exams, and I agree I have to sit the exams but I don’t understand why there were no precautions against COVID-19. I didn’t even see any [sanitising] hand gel in the examination room.”

The reluctance of most universities to postpone the exams changed after the Ministry of Health and Sports announced the country’s first two confirmed coronavirus cases late on March 23.

Early on March 24, nearly all of the nation’s universities closed their doors and announced that the exams would be suspended until further notice. But there has been no announcement from the Ministry of Education or the universities about any follow-up plan for the exams, including when the universities are expected to reopen.

Aung Kaung Satt said the eventual decision to postpone the exams showed that neither the ministry nor the universities were prepared to heed the concerns raised by students about COVID-19 a week earlier.

“The ministry should have directed all universities to postpone the exams before they started,” he told Frontier on March 27.

“The ministry’s handling of the situation has been poor. At first they didn’t want to postpone and then they suddenly stopped the exams; there was no plan, it was not systematic,” he added.

Students who were critical of the student unions for calling to postpone the exams are now upset at the ministry for not seeing them through to completion. The indefinite nature of the postponement has some worried they will face lengthy delays like those experienced in 1988, when universities were shut for several years after the national uprising.

“I was shocked on the morning of March 24 when I saw the announcement about postponing the exams; there were only two days of exams left,” said Nang Nwe Yin Aye, a third-year industrial chemistry student at East Yangon University in Thanlyn Township.

“I am not clear when the exams will take place and whether I will complete my third year in 2020 or not,” said Nwe Yin Aye, who is from Shan State. “I wish the Ministry of Education would be clearer about the plan for university students. We are completely in the dark.”

Education ministry director-general U Ko Lay Win said on March 26 that most universities had decided in conjunction with their education committees to postpone the exams, though some, such as the universities of medicine, were following the original schedule to accommodate oral exams.

“Most universities stopped their exams after the first COVID-19 cases were announced,” Ko Lay Win told Frontier. “The ministry will announce the date for the alternative examinations and the re-opening of universities as soon as we are notified by the President’s Office that the threat from COVID-19 has passed,” he said.

But Ma Moe Moe Oo, a second-year chemistry student at East Yangon University, said she was worried at the indefinite delay.

“If they knew they were going to stop the exams as soon as a case of COVID-19 was found, they shouldn’t have started them at all. They should have brought forward the exams, or postponed them all from the start,” she said. “I am worried about how they will arrange the alternative exams after COVID-19.” 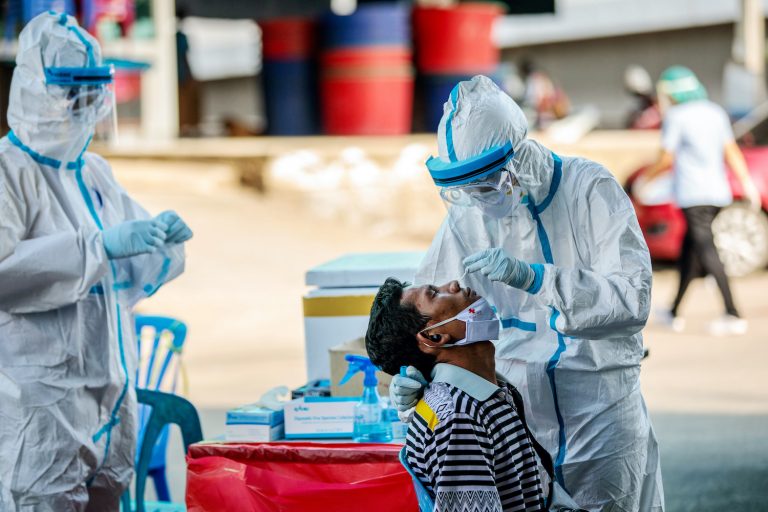 Informal migration from Myanmar is being blamed for the recent resurgence of COVID-19 that has left Thailand in lockdown and prompted Thai authorities to step up security along the 2,400-kilometre frontier.
BY Lawi Weng