Gem and jade traders say an increase in taxes is the main reason why sales have become sluggish at one of the government’s most important revenue-generating events.

THE Myanmar Gems Emporium, one of the government’s main revenue earners, opened in Nay Pyi Taw on August 2, amid predictions it would generate sales of K800 billion, about the same as the previous event.

Figures from the 2016-17 budget show that earnings from gems and jade sales at the emporiums have risen. However, business sources say sales have declined because of changes in taxation, production and demand.

Government budget figures show that overall revenue from the sale of raw and finished gems in 2014-2015 was K73.725 billion. In 2015-2016, following the change of government to the National League for Democracy, the figure increased to K166.064 billion.

Some business people in the industry say high taxation could result in a decline in the revenue from the gems emporiums. 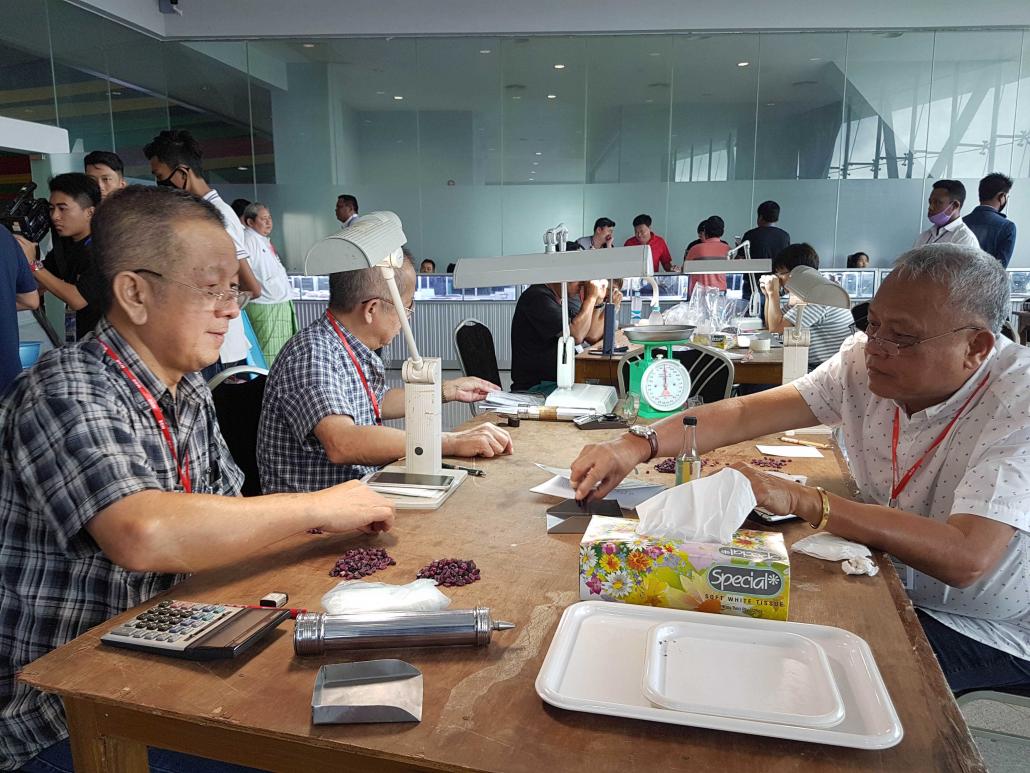 Traders say high taxes are the reason for an expected fall in sales at the emporium. (Nyan Hlaing Lynn | Frontier)

High taxes are a big issue in the industry. At the start of the current financial year, the government included gems on a list of special commodities, making them liable to a sales tax of 15 percent. Sellers also pay a three percent levy to the Central Committee of the Gems Emporium, which organises the events.

“The tax burden is so high that some businesspeople do not participate in the emporium and sell their products on the black market,” U Myint Han, deputy chairman 4 of the Myanmar Gems and Jewellery Entrepreneurs Association, told Frontier. “This is why selling and buying at the emporium has decreased, and state revenue has also decreased.”

‘When the sales tax was 10 percent, I could sell gems worth more than K2 billion [about US$1.47 million], but when the tax was increased, I was selling gems worth K500 million, K300 million, and even less,” said Myint Han.

The reduction in the amount of gems and jade at the emporiums is due to policy changes aimed at producing long-term benefits, said U Min Thu, deputy director of the Ministry of Natural Resources and Environmental Conservation, which hosts the gems emporiums.

The taxation system is being developed so that it can help protect the environment while contributing to government revenue in the long run, he added.

Emporium attendee U Kyaw Phyo Aung, of the Yadana Aung Jewellery Shop in Mandalay, said he hoped that when the new system is fully implemented it will produce long-term benefits for all stakeholders in the industry.

“Because discipline is stricter now, there is a little unease. It is not repression but just trying to make it systematic,” said Kyaw Phyo Aung.

Industry sources also said they were waiting to assess the effect of the change from auctions to a tender system.

The ministry said some buyers who won auctions at former emporiums did not honour their commitment to buy, which resulted in a loss of revenue to the state.

“You can buy on tender if you advance five percent; if you refuse to buy you will lose the advanced sum and will be banned from [the next] three emporiums,” said Min Thu.

He said that although prices at the emporium are listed in euros, domestic buyers can pay in kyat.

Min Thu said it was essential to offer more finished products at the emporiums to reduce the sale of raw stones.

However, both the ministry and the private sector say many challenges will need to be overcome before there is a significant increase in the volume of value-added products on sale at the emporiums.

“We have raw materials and good quality jewels, but we lack technology and production facilities,” said Daw Ei Thet Soe, owner of the North Island Jewellery Shop and a participant in the emporium. 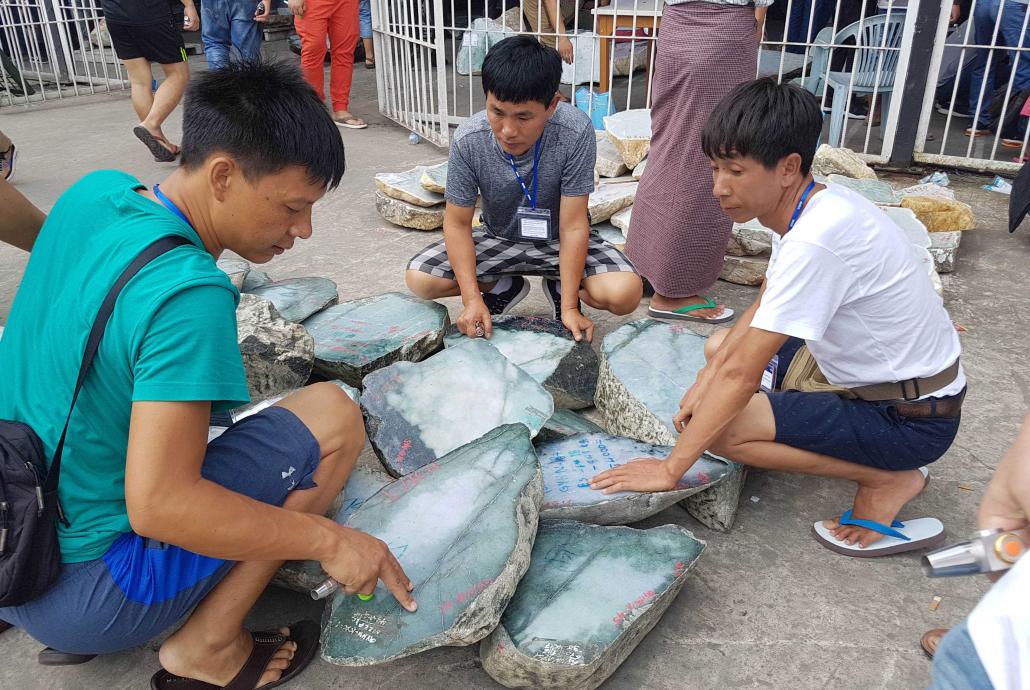 The ministry said it is drafting a 10-year plan to promote the development of value-added products, a move being complemented by the Association of Jewellery Business-owners, which is planning to upgrade training in gem cutting.

The gems emporiums rely heavily on the sale of raw stones and continue to attract mainly Chinese buyers, despite the lifting of sanctions against Myanmar by the European Union and the United States since the transition to democracy began in 2011. The EU lifted most sanctions in 2013, followed by the United States last year, but there is disappointment that emporiums since then have not attracted more buyers from Western countries.

“At the last emporium, some Americans came on study visits. This time we sent invitations through consular offices to the US and Europe, but nobody came. Most of the visitors came from China and the rest are from Taiwan and Thailand,” said U Thant Zaw Oo, vice chairman of the Gems Emporium.

Meanwhile, amendments are being considered to the gemstone law that focus on environmental concerns in the industry.

The draft amendment is before the Amyotha Hluttaw but it is not clear when it will be passed by parliament.

Min Thu said the new law will create a process in which jade and gem mining licences are issued with a view to conserving the environment but without reducing income from the sector.

“The situation will improve slowly as we increase the production of finished products,” he said, referring to the government’s expectations for adding value to jade and gemstones.

A total of 6,561 jade lots and 326 lots of gems are being offered at the 54th Gems Emporium, which has attracted nearly 5,000 buyers, of whom 3,400 are foreigners, including thousands of Chinese.