YANGON — Researchers funded by the Joint Peace Fund, a consortium of mostly western donors, have recommended that the Myanmar government and aid providers support existing services run by ethnic armed groups, ranging from schools to land titling, as a means of building “federalism from below”.

A report published by Yangon-based Covenant Consult on Wednesday, focused on areas of southeastern Myanmar covered by the Nationwide Ceasefire Agreement, said “interim arrangements” for governance in areas of mixed government and ethnic armed group control remained a neglected part of the peace process.

The report, Between Ceasefires and Federalism, noted that slow progress and recurrent setbacks in high-profile negotiations between the Myanmar government and ethnic armed groups made the prospect of a political settlement remote, requiring that attention be turned to securing recognition for non-state systems of service delivery that could form “the building blocks of federalism in Myanmar”.

The authors said such efforts, premised on the “longstanding political legitimacy” that several armed groups enjoy after a half-century of struggle in pursuit of ethnic autonomy, would serve the government’s own national development targets, including for universal school enrolment and health coverage, because many of Myanmar’s poorest communities live in areas beyond government control.

Additionally, the report argued, this approach would address concerns among armed groups and ethnic communities “of the peace process as a vehicle for state penetration into previously autonomous areas, displacing [ethnic armed group] authorities and services, without consulting local stakeholders”.

The NCA, signed by eight ethnic armed groups in 2015 and joined by two more groups early this year, legitimises a local role for signatory armed groups across a wide range of policy areas, from education to law enforcement, yet the peace process has yet to move substantially beyond elite-level political dialogue and the monitoring of local troop movements.

Speaking at the report launch in Yangon, Mr Tim Schroeder, one of the authors, said that governance issues in mixed-controlled areas – for instance those related to land, property and drugs – were routinely referred to state-level Joint Monitoring Committees. These military-dominated bodies are ill suited to handle issues not directly related to armed conflict, he argued.

The report envisages inclusive Joint Interim Arrangement Committees, which could be formed at the national as well as regional levels, as a more appropriate venue for demarcating governance responsibilities without undermining existing ethnic, non-state structures. 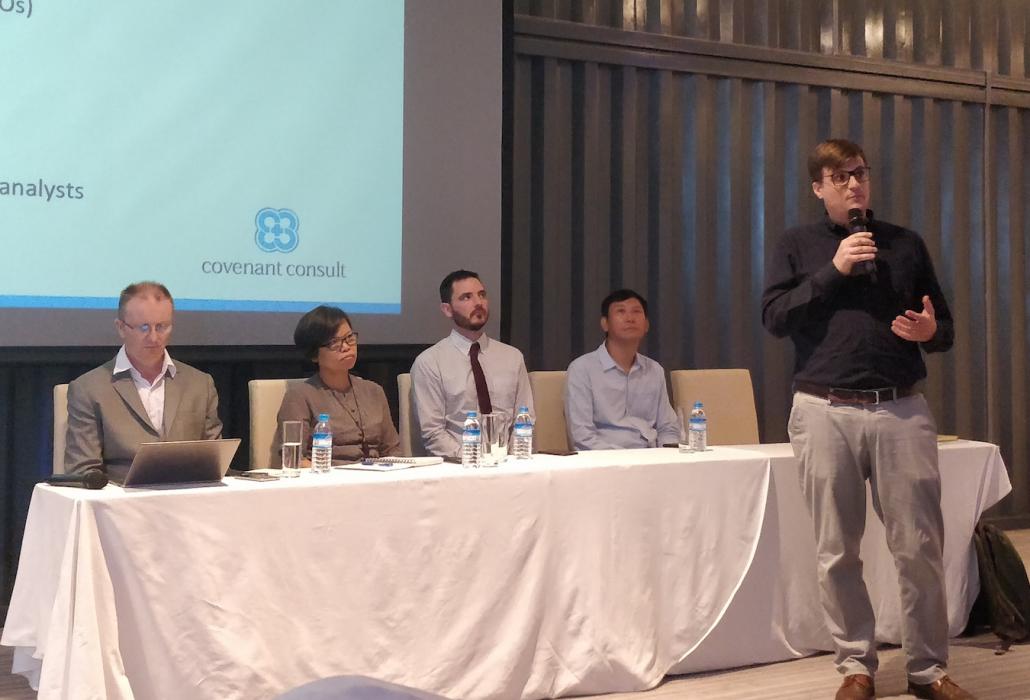 Mr Tim Schroeder speaks at the launch of a report on “interim arrangements in the Myanmar peace process” in Yangon on October 31. (Frontier)

However, the authors identified the main obstacle as “the lack of political will on the part of the Myanmar government and the Army”. They noted that relations between ethnic armed groups and aid agencies – permitted under the terms of the NCA – are now being subjected to new government restrictions.

During interviews, regional government officials cited a lack of direction from Nay Pyi Taw on engaging ethnic governance structures in line with the NCA.

More troubling, according to Schroeder, is an insistence by Tatmadaw negotiators that any recognition of parallel governance structures be linked to military lines of control – despite many ethnic armed group-run services being in areas of mixed control.

Schroeder said it was a “mistake to militarise discussions over governance and service delivery”.

Another problem flagged by the authors was the peace process’ continued detachment from national-level political and economic reform efforts. Debates over land rights, for instance, which are at the core of ethnic minorities grievances and demands for autonomy, make few references to the peace process and generally proceed without the participation of ethnic armed group or Tatmadaw leaders.

Mr Ashley South, another of the authors, said donors and aid agencies should be mindful that areas of Kayin, Shan and Mon states and Tanintharyi Region directly covered by the NCA, though often free of active conflict, were far from being post-conflict areas. “By engaging in these areas,” he said, “aid agencies are inevitably part of the power dynamics”; to partner with the government “is not a neutral act”.

South added that those wishing to aid Myanmar’s peace process must avoid a technocratic perspective that overlooks the substance of ethnic demands for regional autonomy within a federal union.

“Many of the issues at stake in the peace process, which have not been resolved despite the existence of ceasefires, are fundamentally political in nature,” he said. “The risk is that, if they become framed in terms of technical problems to be solved through the application of aid and funding, this can serve to fundamentally depoliticise what are ultimately political and social struggles.”

Meanwhile, high-level peace negotiations have been snagged on issues of disarmament and non-succession, despite State Counsellor Daw Aung San Suu Kyi making peace the core of her mission in government. The process took a further hit when the Karen National Union, a key NCA signatory, wrote to Aung San Suu Kyi on October 27 to say it was temporarily suspending its involvement in talks. A conclave held in Nay Pyi Taw earlier in the month had failed to overcome core disagreements.