The dismissal of 56 students for demonstrating in support of increased education spending has sparked a threat of protests at campuses throughout the country and contributed to rising tensions with the government.

STUDENT ACTIVISTS have condemned a crackdown on protesters at Mandalay’s Yadanabon University amid rising dismay over what they say is the failure of the National League for Democracy to honour election promises on education reform.

The criticism follows the dismissal of at least 56 students from the university on the evening of January 24 after three days of protests on the campus in support of an increase in the education budget.

The demonstrations, which followed a two-day seminar on the issue at the university’s Union Hall organised by the All Burma Federation of Student Unions, took place despite three failed attempts by officials to negotiate with the students. Journalists were banned from entering the campus on the night of January 24 when the students were dismissed, a decision the Ministry of Education said in a February 1 statement was due to violations of discipline. It said the students would be re-admitted if they pledged not to protest again, an offer they have rejected.

Student unions throughout the country were outraged by the dismissals.

“It is the very ugly action of a government that came to office shouting democratic slogans,” said Ma Shwe Yi Soe Lin, secretary of the ABFSU, known by its Myanmar acronym as Ba Ka Tha. “Education reform was one of their election promises but they have not achieved anything,” she said of the NLD government, urging it to allow the students to resume classes. 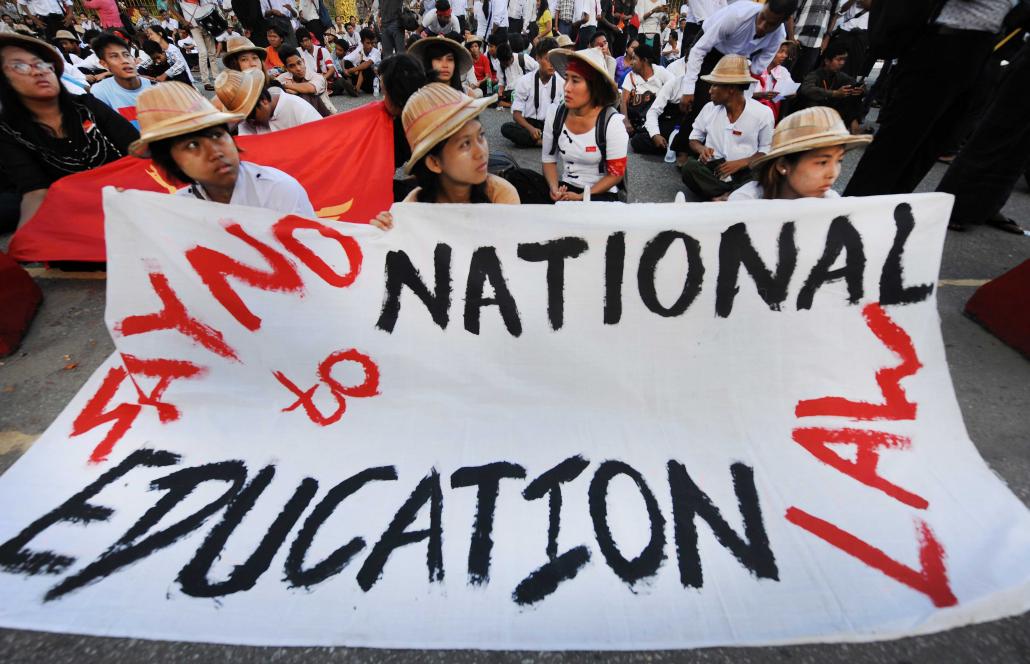 Earlier student protests were held in 2014 and 2015 against the National Education Law. (Steve Tickner | Frontier)

“This is an official statement that prevents students from involvement in politics and demanding their rights, and students who do not abide by it will have action taken against them,” said Ko Kyaw Thiha Ye Kyaw, a third year law student at Yadanabon University who participated in the protests.

“The action of Ministry of Education has instigated enmity between the students and the government,” Kyaw Thiha Ye Kyaw added.

It was unacceptable for a democratic government to dismiss students for exercising their right to demonstrate, the representative committee of the University Teachers’ Association said in a statement on January 26.

It quoted State Counsellor Daw Aung San Suu Kyi as having said that it was reasonable for students to demonstrate because it was the nature of young people.

ABFSU general secretary Ko Kaung Htet Kyaw said there was disappointment that “the NLD government has stood behind those who dismissed the students”, despite having said that students could be active in politics.

Students involved in the protests say it is not clear if the dismissal order originated from the NLD government, the Ministry of Education or university authorities. 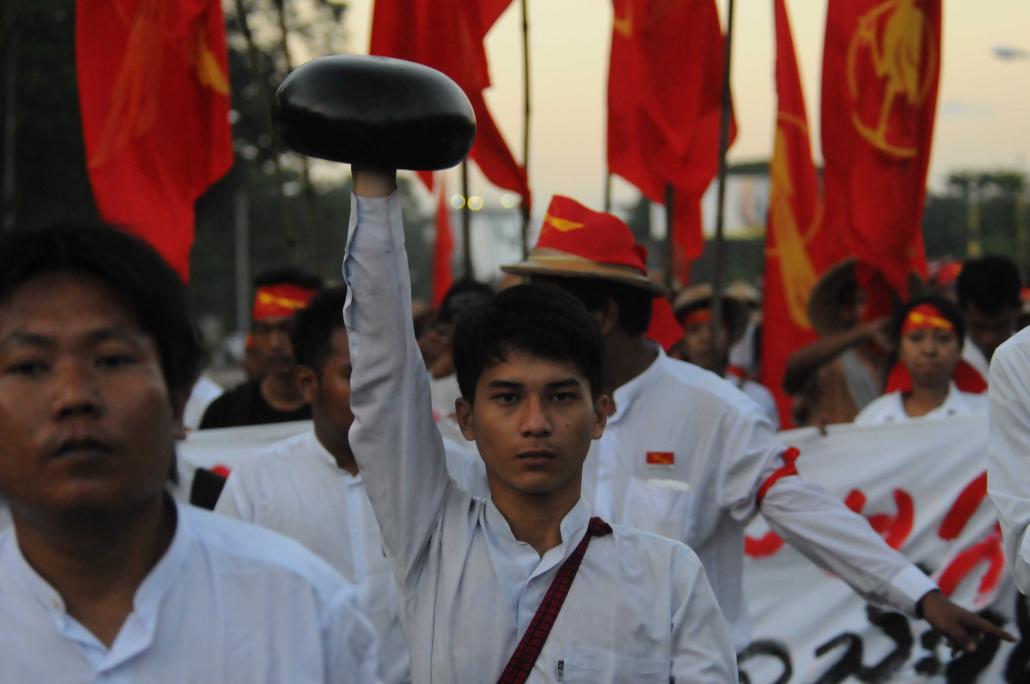 Earlier student protests were held in 2014 and 2015 against the National Education Law. (Steve Tickner | Frontier)

They include Ko Min Htet Myat who said the dismissed students would never return to classes if that meant signing a pledge not to participate in protests.

“If [they] continue to go to school after signing the pledge, in the eyes of the people [they] are admitting they are morally wrong,” said Min Htet Myat, a student at Meiktila University who joined the Yadanabon protest.

Members of the Yadanabon University Student Union have given the government until February 15 to re-admit the students and warn that a failure to meet the deadline could mean action at universities throughout the country.

“We are waiting for a response from the government,” said Kyaw Thiha Ye Kyaw.