The recently opened Goethe Villa will focus on promoting German language and culture as well as events that foster international understanding.

THE ELEGANT heritage building on Kabar Aye Pagoda Road welcomes Myanmar and visitors from around the world, though it’s not another hotel. It’s the recently re-opened German cultural centre, Goethe Villa.

The opening last month after the return of the Goethe-Institut to Myanmar in 2014 followed 18 months of extensive renovations to the two-storey building, which has a rich historical legacy and a connection to German art.

The villa was built in the 1920s and was the home of a wealthy Sino-Burmese family at a time when Burma was flourishing amid an economic boom that followed World War I.

The villa was abandoned when the family fled Rangoon during World War II. It later served as the headquarters of the Anti-Fascist People’s Freedom League, a left-wing alliance formed in March 1945 and headed by Bogyoke Aung San to resist British colonialism and advance the cause of independence.

As AFPFL headquarters, the villa was the venue of some of the most important resolutions in the struggle for independence. After the assassination of Aung San in 1947, the villa was left vacant for 20 years until it returned to use as the State Academy of Arts, a role it performed at that location until 2006.

The German connection at the academy was its longest serving director, the renowned sculptor, Soe Thint, who in the 1960s studied at the Art Academy in Dresden in what was then East Germany.

After Myanmar began its opening following the 2010 elections, the Goethe-Institut started exploring opportunities to re-establish a presence in the country. The first Goethe-Institut in Southeast Asia opened in Rangoon in 1959 but it was shut down in 1962 – along with the British Council, Alliance Francaise and American Center – within months of the putsch headed by General Ne Win.

During bilateral negotiations in 2012 for a cultural agreement, Germany was offered the use of the derelict villa for a Goethe-Institut and a long-term lease to the site was eventually secured in 2015. The Goethe-Institut had returned to Myanmar in 2014 and opened temporary premises on Pyay Road, at the French cultural centre Institut Français de Birmanie.

Renovations to the villa began in November 2016 with funding from the German Foreign Office in Berlin. The project has also included building a library, auditorium and café. 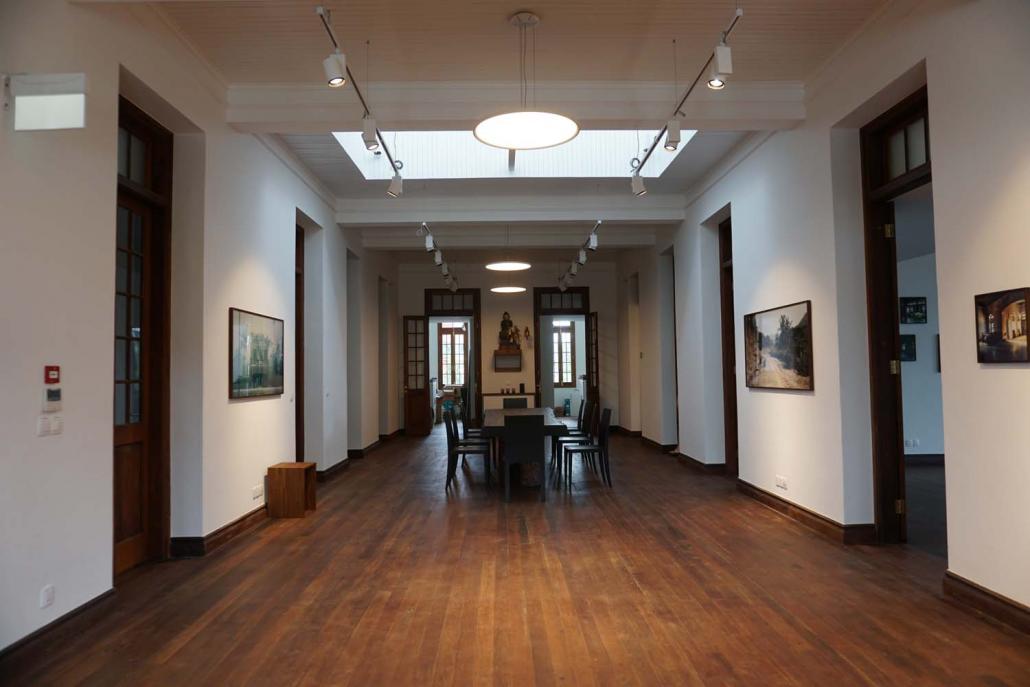 The opening was preceded on June 8 by a musical performance, “The Re-Vibrating Goethe Villa”, and followed by a series of events. They included concerts accompanying the screening of Myanmar’s only surviving movie from the silent era, “The Emerald Jungle”, made in 1934, and “Dark Whispers”, a photographic exhibition by Beatrice Minda highlighting conflicting aspects of the colonial period and its consequences.

There was also a Berlin club night on June 16 featuring German DJs, and a screening of the World Cup match between Germany and Mexico on June 17.

One of the DJs, Mr Christian Schwanz, better known as CEE, also conducted an electronic music training workshop at the villa with his partner, Phon.o.

“The need to create is a global thing,” said CEE, citing the eagerness of young Myanmar who attended the workshop to broaden their knowledge as an example of music’s universal appeal.

CEE, who is based in Malaysia, told Frontier that techno music is a form of expression that can help to promote intercultural exchange, something he believes is “the most important thing we can do nowadays” to make the world a better place.

As well as providing an opportunity for young Myanmar to study German, Goethe-Institut Myanmar says on its website that the villa will serve as a venue that fosters “cultural encounters and creative exchanges between artists from Myanmar, Germany and Europe”.

In an interview with Frontier, Augustin highlighted the importance of access to knowledge, which had been restricted in Myanmar when it was under military rule.

Freedom of expression is one of the reasons why the Goethe-Institut welcomes having a permanent home in Yangon.

Augustin says that despite the transition in Myanmar, restrictions remain on freedom of expression. However, exhibitions at Goethe Villa are immune from the government censorship decisions that can affect such events at public venues.

Although German language and culture will be a focus of Goethe Villa, there will also be an emphasis on intercultural exchange.

“This is a place for us to understand each other,” Augustin said.

Goethe Villa (info@goethe.yangon.de) is on Kabar Aye Pagoda Road near the intersection with Natmauk Road and is open to the public on weekdays between 9am and 5pm.