New laws aimed at attracting increased foreign investment are encouraging, but more steps are needed to ensure that the country’s growth benefits people in all parts of the country and supports the peace process.

ECONOMIC DIVERSIFICATION should be high on the agenda of Myanmar’s government. The country’s leaders must make managing Foreign Direct Investment a priority in order to attract high-quality investment in all sectors and parts of the country.

If not properly managed, the inflow of FDI will merely exploit domestic low-cost labour, natural resources and transfer the profits out of Myanmar. How to attract, and benefit from, FDI is a key challenge for Myanmar in the next few years, and is closely linked to the peace process, as many of the natural resources are located in ethnic minority areas.

On April 1, the government published its list of nearly 190 promoted sectors. They tend to be labour-intensive and include manufacturing, infrastructure development, agriculture, food processing and hotel and tourism, as well as sectors such as healthcare,  education, and renewable energy. The government has yet to officially release more information about restricted and prohibited investments. 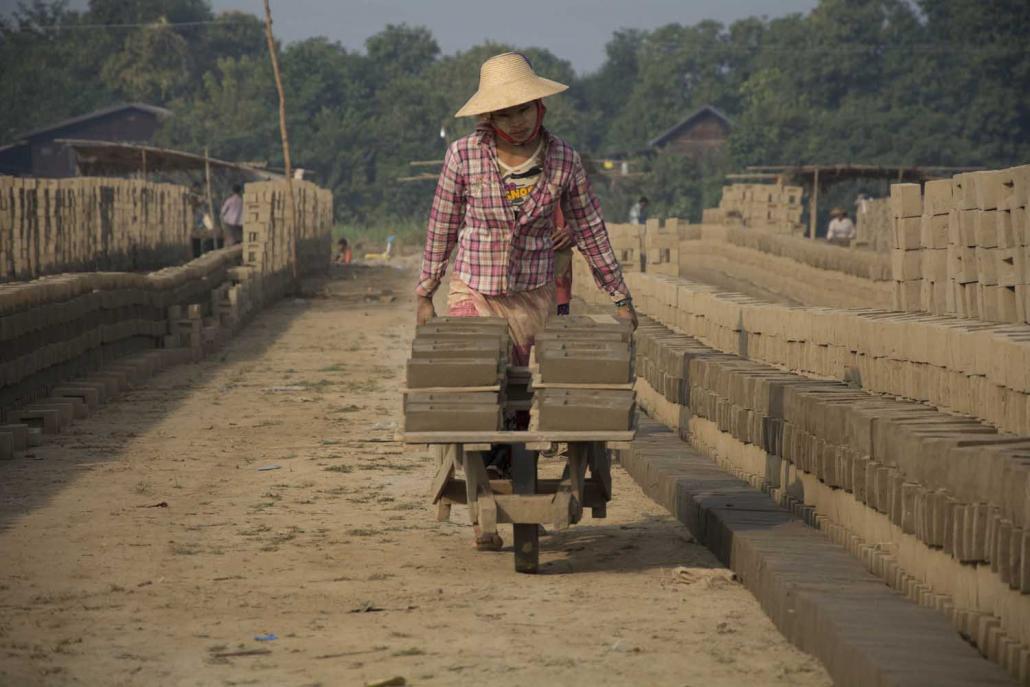 A worker carries bricks on the outskirts of Mandalay. (Teza Hlaing | Frontier)

This piecemeal approach puzzles investors and only adds to the current wait-and-see mode for investing in Myanmar. The new approach targeting specific sectors is a big step forward to increase value-oriented foreign investment, but misses the opportunity to set a clear agenda to reduce the heavy reliance on oil and gas. Although the share of non-oil FDI has steadily increased in recent years, exports and government revenues remain concentrated on this sector.

The two sectors combined account for almost two-thirds of the accumulated stock of foreign investment for the current financial year as of February 2017. The Myanmar Investment Commission failed to adopt more specific regulations to rebalance the economy away from oil and gas and set clear goals for increasing the share of non-oil FDI. Such plans are critically important, not only for economic growth, but also for the ambitions of millions of young people in the country.

All businesses in the promoted sectors are entitled to income tax exemption, but the extent of the exemption depends on the level of development in the area of the country where the investment takes place.

It is doubtful that the new rules on tax exemptions will spur labour-intensive investment in underdeveloped regions that need it most. Tax exemption alone will not make up for challenging business environments and lack of infrastructure. If not properly managed, the inflow of non-resource FDI will continue to centre on the Yangon-Mandalay corridor, further contributing to the economic imbalance in the country and negatively affecting the peace process. The MIC will have to come up with more concrete investment promotion policies that correspond to the priority locations.

For example, Vietnam used a “carrot and stick” approach to lure foreign investors to remote regions. It allowed investment in preferred sectors like labour-intensive industry only in designated regions, but sweetened the deal with special incentives, such as preferential treatment on land use fees and exemption of import duties to spur investment in undeveloped areas.

One of the most effective ways to improve economic and geographic diversification is to develop the effectiveness of local companies. By promoting private sector development, governments can help develop internationally-competitive companies across the country.

The spillover of high productivity from FDI to domestic firms is key to multiplying the economic impact of FDI, which should “crowd in” not “crowd out” domestic investment by increasing their participation into FDI production and regional production networks. This will foster more vibrant industries, promote local content creation, spawn advanced technologies and innovation, and provide new job opportunities.

While concerns are often expressed by domestic business communities over an anticipated influx of foreign investors, which could reduce their market share, the reality is that local companies were prevented from laying the foundations for global competitiveness throughout the years of isolation.

Collaboration may be the best way forward for the country as a whole, as well as for those companies wanting to survive in a global economy. In many ASEAN countries, the competitive pressure brought by foreign firms has stimulated the operational efficiency of domestic firms, and forced them to accelerate the introduction of advanced production technology.

Therefore, the MIC should consider actively linking incoming FDI with existing local industries and encourage local content and technology transfers in order to boost competitiveness. More open regulations on joint ventures could lead the way. MIC is currently revising the Companies Act, which is expected to allow foreign businesses to hold stakes in existing domestic companies. Currently, Myanmar bans foreign companies from holding stakes in existing domestic businesses but the revision is expected to allow foreign ownership in some companies.

The government is considering opening up the local stock market to foreign investment and introducing a 35 percent foreign ownership threshold, defining what constitutes a foreign invested company that is subject to foreign investment regulations. If the revision leads to active corporate mergers and acquisitions, it could serve as an opportunity to reinvigorate local companies and enable better local participation in global value chains.

Technology can be the single most important enabler of innovation, competitiveness and economic diversification. Myanmar has an opportunity to succeed in this area because it is relatively unbound by legacy systems. Myanmar can spring over traditional stages of economic development by adopting leading-edge technologies in energy, environment, agriculture and production. The country’s huge youth population, with its digitally oriented culture, offers many opportunities for leapfrogging digital technology and speeding up economic diversification.

Unfortunately, this approach would require huge investments in building the necessary technological infrastructure that is probably beyond the current means of the government. FDI may be a way forward, as technology transfer is widely considered one of the benefits of FDI, and played an important role in economic development in other countries like China, Vietnam, and Thailand. 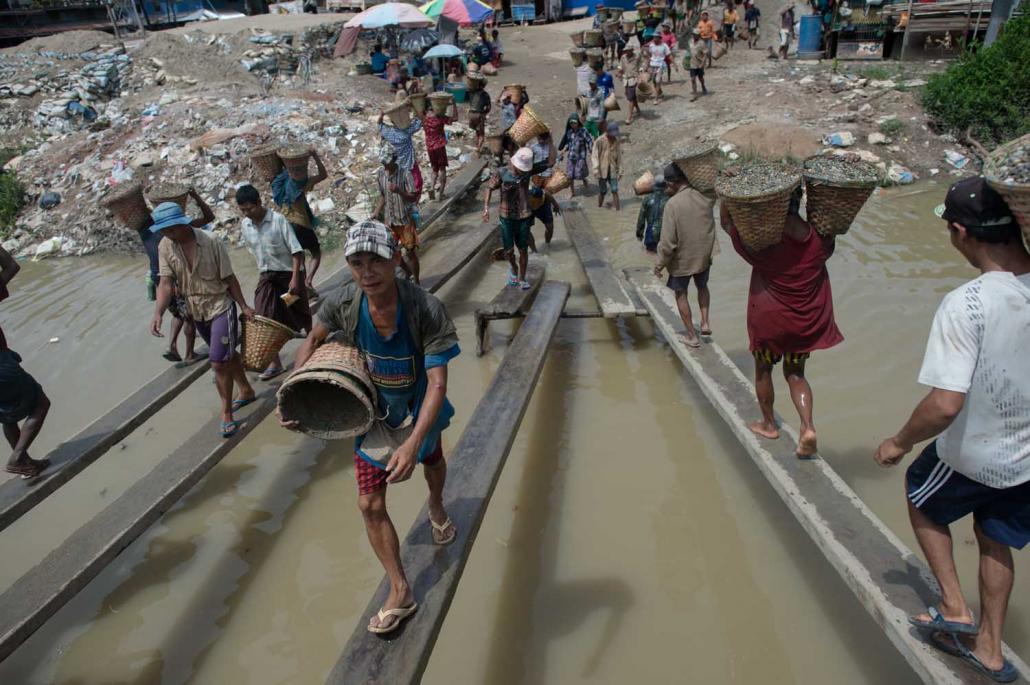 Workers carry baskets loaded with gravel as they unload them off a boat in Yangon. (AFP)

As a matter of fact, many countries in Southeast Asia are giving higher incentives to foreign companies who transfer high technology. Under the new legislative framework, some sectors like information technology, telecommunication, science and research services, and renewable energy qualify for tax incentives as promoted sectors, but the government would be well advised to take more specific actions to encourage technology transfer in all sectors.

Currently, Myanmar has a comparative advantage regarding lower labour cost and is attracting FDI in export-oriented, labour-intensive sectors. When receiving FDI, the Myanmar government should recognise the positive effects of creating employment and ensure that workers in the country are able to become more skillful in technologies.

The effects of job creation of foreign investors are well known by the countries in the region. Consequently, other Southeast Asian countries offer incentives to foreign companies who create employment. For example, the Malaysian government allowed the extension of tax holidays for companies who employ 500 people or more from five to ten years.

A large gap exists between the technological and managerial skills of Myanmar labour, and the skills increasingly needed in business today. Therefore, it is important to promote further human resource development to meet investors’ employment needs and facilitate technology transfer. If ignored, this skill gap will widen and scare off potential investors.

The best way to address this issue is through short- and medium-term training initiatives. Existing educational reforms are important, but can take decades to make an impact. New, urgent initiatives should focus on targeting vocational education and training, ideally in collaboration with companies and academic institutions.

The education sector is one of those targeted by MIC to receive special treatment but more needs to be done to encourage foreign investors to transfer skills and technical knowledge to their employees. Specific policies should be drafted, such as providing incentives for establishing in-house training centres for large scale investments. For example in Vietnam, the investment license for automobile manufacturing was linked with setting up vocational schools to support sector specific skills development.

If educational institutions and FDI are better connected, and the skill level of average workers continues to increase, Myanmar has the opportunity to receive FDI that requires higher technical skills. This is the best way to step up the technological ladder and diversify the economy.

Seizing the opportunities offered by foreign investment is important. The next few years will be a once-in-a-generation opportunity for Myanmar’s government and private sector to engage with foreign investors in the next phase of the nation’s reform and growth. Much of this will hinge on getting the investment strategy right and demonstrating the ability to host an export-oriented industry.

With a shift in FDI policy, Myanmar can lower its dependence on natural resources and regional imbalance moving into the future as a more balanced economy enjoying sustainable growth.