Seeking the truth in Maungdaw

The government permitted a select group of journalists to make a supervised visit to Maungdaw Township last month but conflicting accounts about what happened there pose a challenge to determining the facts.

ALARMING REPORTS from northern Rakhine State after the deadly militant attacks there on October 9 prompted the government to finally allow a select group of journalists to visit the region last month.

The trip was apparently arranged in an attempt to counter reports, mainly in the international media, about alleged abuses by the security forces during a “clearance operation” in Maungdaw Township to hunt down the militants and recover weapons lost in the initial attacks.

The region was closed to journalists and other independent observers after the operation began, making it difficult to ascertain objective facts about the situation on the ground.

Following requests from domestic and international media for access to the conflict area, the government granted permission for 13 Myanmar and foreign reporters and photojournalists to visit Maungdaw from December 20 to 23.

Prominent columnist U Sithu Aung Myint, who writes for Frontier and joined the media group as a representative of the Central News Bureau, said he welcomed the opportunity to travel to the conflict area, adding that it was unprecedented for the government to arrange such a trip.

“I understand there were debates between the cabinet and government officials about whether to allow reporters to visit the conflict area, and about who should be chosen to make the trip. I think they chose media they regard as reliable,” he said. 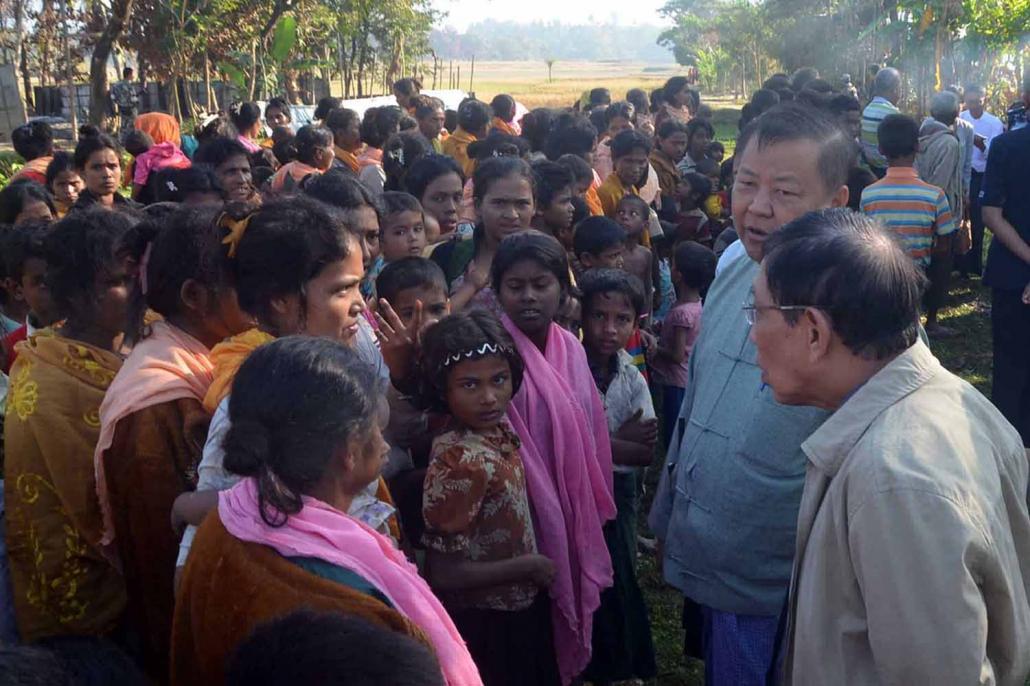 Rakhine State Investigation Commission officials meet residents of Gwazon, a Muslim majority village in Maungdaw Township, on Dec. 12. A military officer was killed by a group of attackers in the village on Nov. 12. (AFP / State Counsellor’s Office)

Despite repeated requests, Frontier was not invited to join the trip, though it sent a reporter and a photographer to the Rakhine State capital, Sittwe, in the hope of a last-minute change of mind by the government.

Senior journalists who had been invited also argued in vain for Frontier to be allowed to join the media group. Officials cited security reasons for excluding Frontier, but did not elaborate.

Frontier’s account of the trip is based on interviews with members of the media group after they returned from Maungdaw.

The journalists were told in advance that as well as government-arranged meetings with village headmen and elders, they would have opportunities to freely interview other residents.

At Ngakhuya village, a man who told the journalists on December 21 that there were no cases of rape or arson during the security crackdown was found beheaded in a nearby river two days later.

The man, described as a 41-year-old volunteer library assistant named U Shu Na Myar, also known as U Dus Mammad or U Runarmyar, said he was present when the security forces arrested some of the suspected militants involved in the October 9 attacks, who lived in the village. They were not physically mistreated when they were arrested, he said.

“I feel deeply sorry for this man,” said Sithu Aung Myint. “From my ethical point of view, there is no news worth dying for.”

Myanmar Times reporter Ko Nyan Lynn Aung said the journalists had wanted to interview the two women who alleged they were raped because they were best-placed to give an account of events.

He said further enquiries had revealed that the two women had told of allegedly being raped when they met members of two government-appointed commissions during visits to Maungdaw in December.

“So the question emerged, why didn’t the government take action against the culprits?” said Nyan Lin Aung. “I asked relevant sources from the government side, and then the [December 26] statement came out that said the women’s allegations had been investigated and what happened was not as they described. So, I think it is very complicated and needs further attribution … for the story to be more accurate,” he told Frontier. 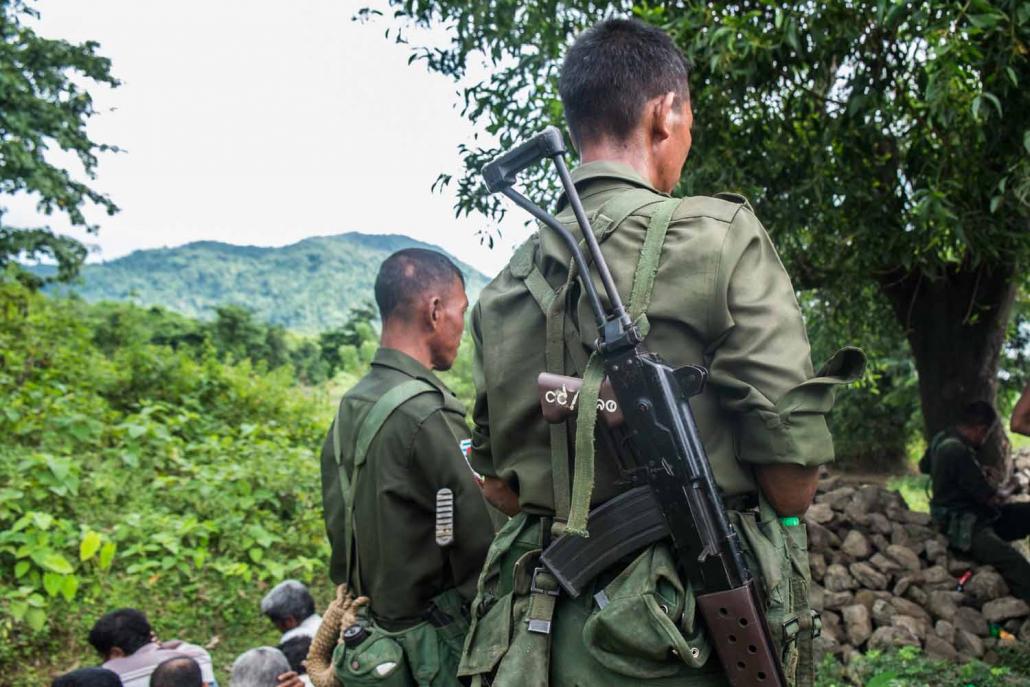 TV Asahi reporter Ko Han Htwe Aung said “language problems” had complicated the interviews with the two women. “When we interviewed the women, a villager translated for one of them but his Burmese was not fluent.

One of the ladies spoke in her own language through a translator, while another spoke in Burmese language. [The one speaking in Burmese] said, ‘I closed my eyes and was raped five times.’ But when we asked for more details, she didn’t have the language skills to explain clearly. The language difficulties made it difficult to know if they were telling the truth or not.”

The statement to which Nyan Lynn Aung referred that apparently debunked the women’s claims of having been raped was issued by the Information Committee of the State Counsellor’s Office on December 26 under the headline “Fake Rape”. It said Ma Jarmaliha was “exclusively questioned” by a woman member of the government investigation committee on December 11 and said she had never been raped nor witnessed any rapes.

The statement noted the rape allegations made by Jarmaliha and Than Than to the media team on December 21 and said “authorities” subsequently visited Pyaungpaik and had sought a meeting with the women “but they had escaped”.

The authorities had questioned Ma Jarmaliha’s neighbours and village elders and were told “that the accusation [sic] were not true, that they had never heard of any rape in the village and could not understand why the women told journalists that they had been raped”, the statement said.

The information committee issued a second statement on December 26 about the death Das Mammad. It included an image of his headless corpse on which was superimposed, “Truth teller beheaded”.

Responding to the villager’s allegation that the security forces had torched more than 100 houses in Pyaungpaik, the Rakhine State Minister for Security and Border Affairs, Colonel Htein Lin, told a news conference in Sittwe on December 22 that such behaviour was not possible because the security forces rigorously adhere to rules and regulations.

However, Human Rights Watch has said that based on satellite imagery at least 1,500 buildings in Maungdaw Township had been destroyed, including 85 buildings in Pyaungpaik (also referred to as Pyaung Pyit).

It has accused the military of responsibility, despite vigorous denials. “The satellite imagery and eyewitness interviews clearly point the finger at the military for setting these buildings ablaze,” said Brad Adams, Asia director at Human Rights Watch, in a December 13 statement.

Members of the media team said they saw the remains of torched houses, but were unable to determine the veracity of the villager’s or the minister’s comments in the absence of further information.

“Some described themselves as ‘Rohingya’, some called themselves ‘Bengali’, but most used ‘Muslim people’ to describe themselves,” said Nyan Lynn Aung, who was visiting Maungdaw for the second time since the October 9 attacks. Nyan Lynn Aung said his assessment of the region’s residents based on personal observation was that they did not want conflict because they did not want their lives and economic activities to be disrupted.

Sithu Aung Myint said he sensed fear among the Maungdaw residents interviewed by the journalists.

Sithu Aung Mynt said every allegation of abuse reported in the international media needed investigation to determine its veracity.

“We can’t say for sure that the security forces didn’t commit rights violations at all, and neither can we say that they committed the severe abuses that the international community has accused them of,” he said. “Each case needs to be investigated individually.”

Sithu Aung Myint said the coordinated attacks on October 9 had come as the government was trying to resolve tensions between the state’s ethnic Rakhine and Muslim populations.

Meanwhile, the government is reported to be planning another supervised media visit to Maungdaw, although Ministry of Information deputy permanent secretary U Myo Myint Maung said the date and itinerary was yet to be confirmed.

Some journalists on the visit said the media should be allowed to freely cover the news from Maungdaw and were hopeful that they would be permitted by the government to make independent visits to the township.

The death of Dus Mammad has highlighted the need for journalists and media organisations to prepare for any future visit by collaborating on ways to protect news sources.

Top photo: Residents of the Muslim village of Gozirbill near Maungdaw pose for a photograph at a refugee camp in Teknaf, Bangladesh, on November 24, shortly after fleeing Myanmar. (AFP)