Seeking the protection of Bobogyi

Drivers visit a famous shrine on Yangon’s outskirts to propitiate its nat in the belief it will protect them in business and on the roads.

ON YANGON’s northern outskirts, a famous shrine sheltered by a banyan tree with a gold-painted trunk bustles with activity day and night as drivers in vehicles of all kinds visit to pay their respects and pray for its protection.

The Shwe Nyaungbin (“Golden Banyan Tree”) Bobogyi shrine in Mingalardon Township, houses a particularly revered image of Bobogyi, or “Great Grandfather”, one of the most common of the nats, or guardian spirits, the worship of which predates the arrival of Buddhism in Myanmar.

Honouring the Shwe Nyaungbin Bobogyi shrine is believed to be auspicious for business, as well as safe travel, and the endless processions of vehicles at the shrine include trucks and taxis, as well as private cars. The drivers perform a pwe, or ceremony, that involves presenting an offering of flowers, a coconut, three bunches of bananas, thabyay (Eugenia) leaves, candles and incense. An assistant then splashes the car with lustral water while uttering a prayer so fast it can barely be understood.

The ritual ends with the vehicle owner showing respect in a manoeuvre that involves driving backwards and forwards three times in obeisance to the shrine after which a piece of red and white cloth and a bunch of flowers and thabyay leaves are tied to the grille for good luck.

A pwe usually costs about K8,000. The keeper at the shrine takes K4,500, placing it on an altar with Bobogyi and other nat images. The rest goes towards the ritual offerings.

Each nat – and there is an official pantheon of 37 great nats as well as many lesser ones – is believed to be propitious for a particular activity, which in the case of Shwe Nyaungbin Bobogyi is matters involving vehicles. Other nats include Bobo Aung, who is worshipped for expertise in economics, and Bomin Khaung, for success in social affairs. 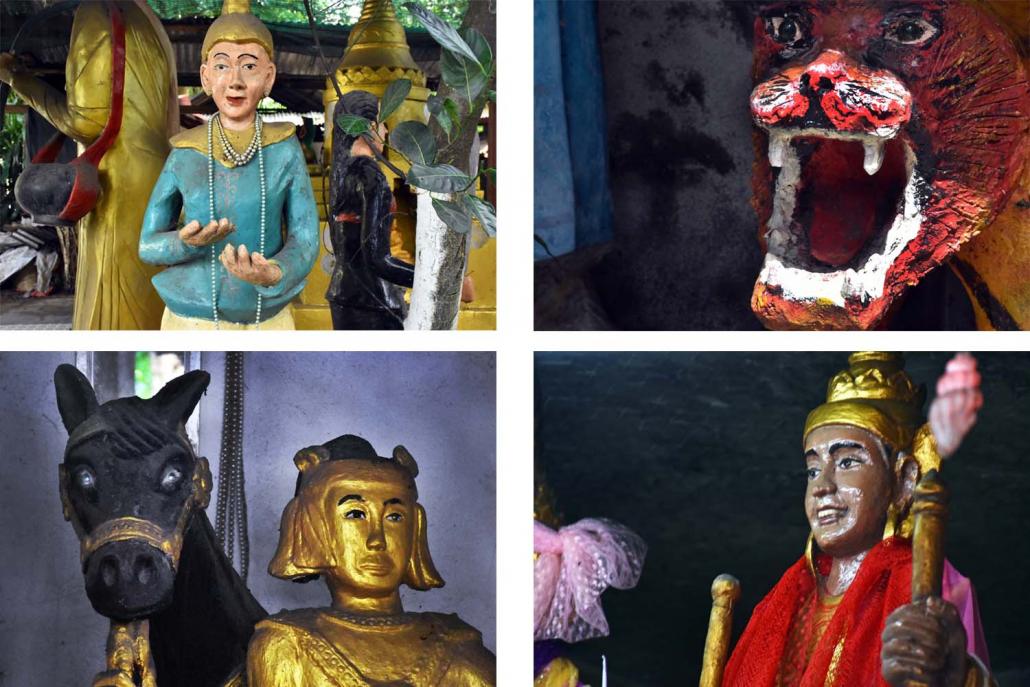 Among the devotees at Shwe Nyaungbin Bobogyi on one late August morning was downtown Yangon resident U Myo Aye, 45, who arrived in his light truck. Though a Hindu, Myo Aye also visits Buddhist and nat shrines.

“I am here because I believe Bobogyi helps me and takes good care of me, always,” Myo Aye told Frontier.

He has worshipped at the shrine every year since he bought the truck about nine years ago and went into business selling paper for recycling to a factory in Shwepyithar Township.

“I come here every year after I renew my vehicle registration and perform a pwe to pray for good business and safe driving,” said Myo Aye, who has no doubt that Bobogyi protects him from hardship. 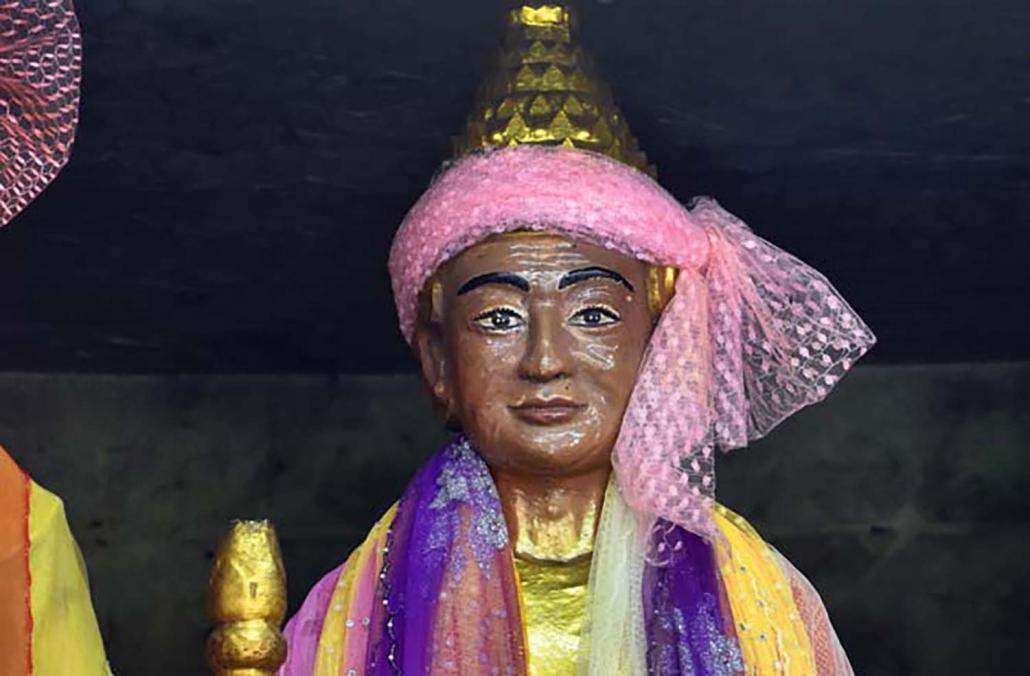 “Whenever I encounter difficulties, all I need to do is to think about Bobogyi and they will be overcome,” he said.

“Shwe Nyaungbin Bobogyi is very popular because of his power; he shows us how powerful he is.”

The shrine’s keeper, U Mya Aye, said that although Bobogyi is not among the 37 great nats, he exists at a higher celestial plane than all of them.

Mya Aye, 74, who observes the eight precepts of a devout Theravada Buddhist, inherited the management of the shrine from his adoptive mother in 2008. He lives and sleeps at the shrine with his eldest son, Ko Zarni, 47. Mya Aye’s family, which relies on income earned from the shrine, lives nearby.

Mya Aye says believing in Bobogyi has enabled him to have a good life.

“If you respect nats, they will bless you,” he said.

Zarni said the shrine, on which tax is due to the government twice a year, quietens down a little during the rainy season, from May to October.

“We believe in Bobogyi more than other nats because tending this shrine is all we do and it provides the food we eat,” he said. 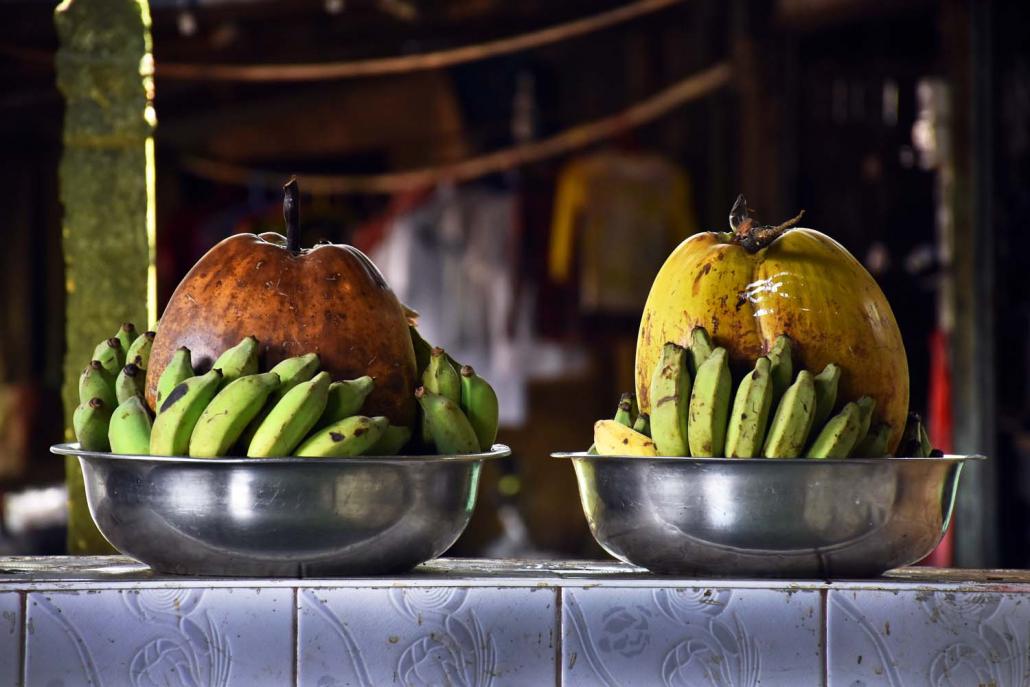 Yangon resident U Thet Naing, 54, has been paying respects at Shwe Nyaungbin Bobogyi since learning about the shrine after he began driving a taxi in 1995.

He has been taking his taxi, which has Buddha images on the dashboard and auspicious red and white cloth tied to the grille, to the shrine each year after renewing the registration.

Thet Naing said he worships at the shrine out of tradition, but also a genuine belief that Bobogyi can provide the blessing of protection.

He said many young people had turned away from paying respect to nats because of a decline in superstitious beliefs.

Vendors at the shrine include Daw Thandar Htun, 44, from nearby Htauk Kyant, who has earned a comfortable income selling flowers to worshippers for the past 25 years.

Her working day begins at 4am and she usually returns home about 1pm after her stocks of thabyay, jasmine, roses and other plants have sold out. 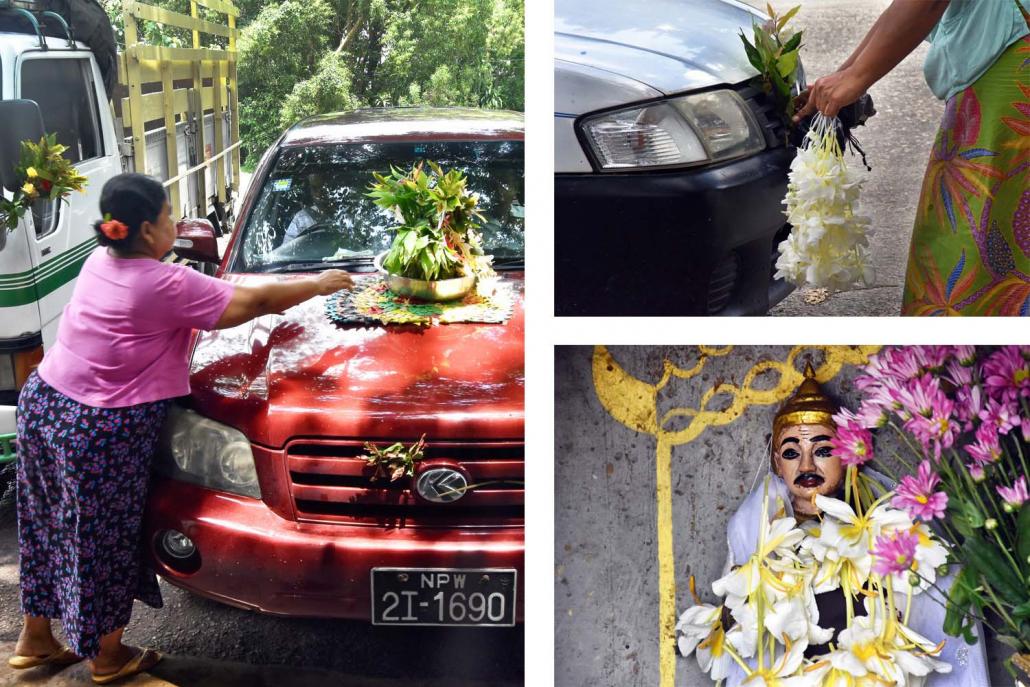 Thandar Htun says the business has provided her family with a stable income that easily covered living costs and ensured her children received a good education.

“Even my younger daughter has graduated with two degrees,” she said proudly.

Though business is quieter during the rainy months, the shrine is always busy on Sundays, Thandar Htun said.

“This shrine where we work for a living is our benefactor and we also worship and pray here,” she said.