The government has unveiled plans to allocate K20 billion for border fence and road projects aimed at improving security in northern Rakhine State.

NEARLY A month after the August 25 attacks by the Arakan Rohingya Salvation Army in northern Rakhine State triggered a humanitarian crisis, the government unveiled a multi-billion-kyat project to upgrade security and infrastructure in the region.

The Mayu Mountain Range Project was announced by the President’s Office on September 18, a day before State Counsellor Daw Aung San Suu Kyi’s long-awaited address on the Rakhine State crisis.

The project involves building or upgrading fences along the 273-kilometre (170-mile) border between Myanmar and Bangladesh, of which about 210km is already fenced. The government says the remaining 67km – along beaches on the Bay of Bengal in Rathedaung and Maungdaw townships and in thickly forested areas between Buthidaung township and Bangladesh – will be fenced without delay. It recently allocated an initial K20 billion (US$14.64 million) to the initiative. The project also includes upgrading roads around the Mayu Mountains. 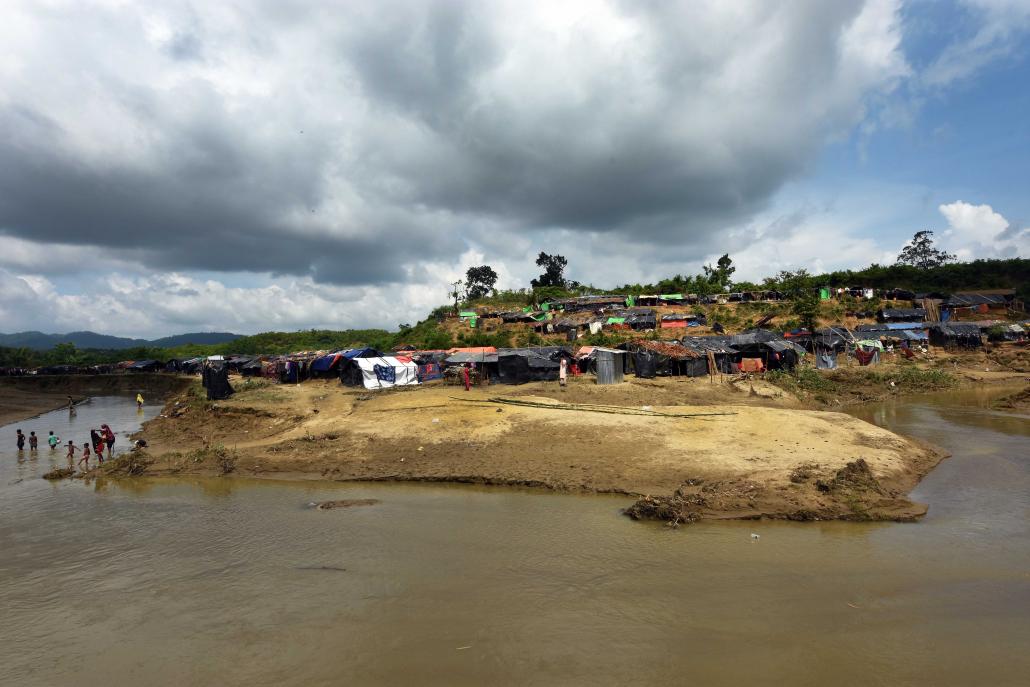 People displaced by violence in Rakhine State camp in an area known as ‘no man’s land’ on the banks of a small river that marks the border between Bangladesh and Myanmar. (Steve Tickner | Frontier)

The Tatmadaw says it has found ARSA camps in the ranges, which are home to members of ethnic Rakhine sub-groups such as the Mro, Daingnet and Maramagyi.

While the statement did not specify which roads would be upgraded to highway standard, the project is likely to focus on Rathedaung and Maundaw townships on the western side of the Mayu range. The most strategic route would appear to be from Angumaw village, at the southern tip of the peninsula in Rathedaung Township, with the border crossing at Taungpyo Let Yar. The roughly 120-kilometre route runs through the town of Maungdaw.

The Angumaw road upgrade would dramatically cut the travel time from Sittwe to Maungdaw and the border area. The main route at present is a 5.5-hour ferry ride to Buthidaung, followed by a 90-minute drive across the mountains to Maungdaw.

Angumaw is just 40 minutes by boat from Sittwe. From there, Maungdaw could potentially be reached in just two hours by car. If the road is upgraded to a high standard, it could potentially connect Sittwe to Cox’s Bazar in six or seven hours.

This could have a dramatic effect on the area, particularly in terms of international trade and other economic activity. For now though, the road is in a very poor state.

The road across the ranges between the towns of Maungdaw and Buthidaung is also likely to be upgraded under the plan. This heavily policed road is a major trafficking route for the amphetamine trade, which is rampant in the area. On October 1, AFP reported that two soldiers were arrested in a military vehicle in Maungdaw allegedly carrying nearly 2 million methamphetamine pills.

The September 18 statement from the President’s Office said a total of K190 billion had been allocated to the Ministry of Home Affairs between 2009-2010 and 2017-2018 for border fence projects, though the previous government did not provide details about how the money was spent during its term in office. 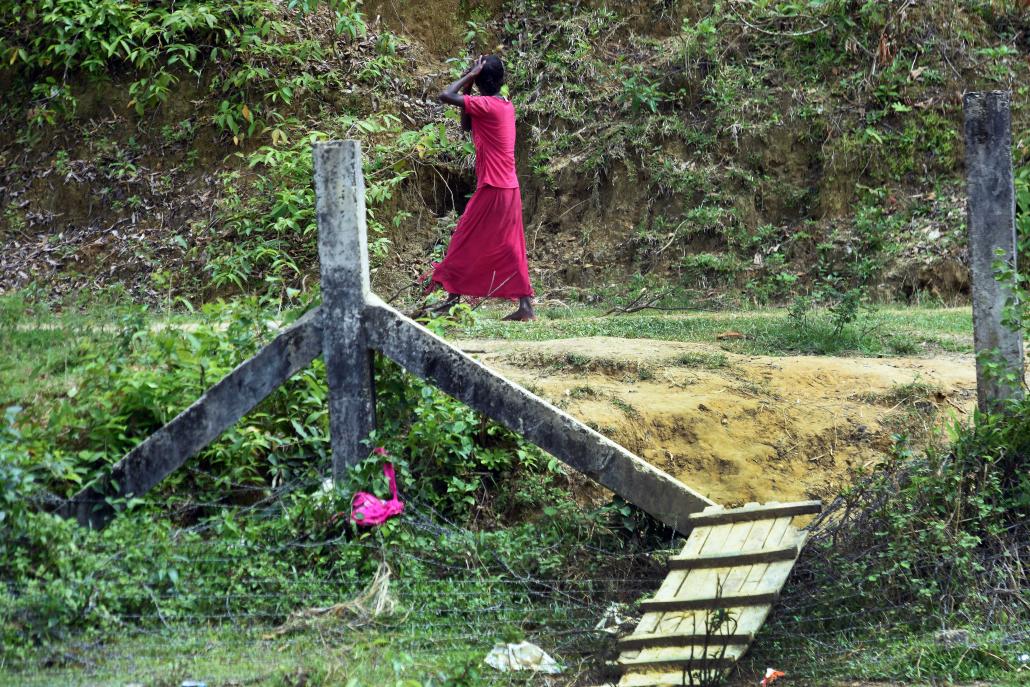 A section of the border fence between Myanmar and Bangladesh. (Steve Tickner | Frontier)

The allocation is also believed to cover the cost of building some of the roads, but this was not made clear in the statement.

The government has also received donations from civilian foundations towards the cost of building or upgrading border fences. On September 21, Max Myanmar’s Ayeyarwady Foundation donated K1.2676 billion to the military to support construction of 2 miles of fence along the Bangladesh border.

State Counsellor Daw Aung San Suu Kyi said in her September 19 speech that verified refugees would be permitted to return to Rakhine State from Bangladesh. However, any refugees allowed to return are likely to face housing difficulties, as satellite images show that more than 200 Muslim villages have been burned to the ground since August 25. Many of these are located close or beside the road linking Angumaw with Taungpyo via Maungdaw. Road upgrade or building projects along this road, particularly near destroyed villages, could exacerbate tensions further.

The government will also need to be vigilant to prevent corruption in the fence and road projects, which will involve many individual contracts. While improved infrastructure and increased economic activity should lead to improved security, it could also be used to facilitate drug and human trafficking, and other illicit activities.