The recent spike in fighting in the north of the country appears to have dashed hopes that State Counsellor Daw Aung San Suu Kyi’s leadership could bring all ethnic armed groups into the Nationwide Ceasefire Agreement. China has expressed growing concern about the violence near its border and increased its support for Myanmar’s peace process, hosting a number of high-profile meetings.

In the middle of February, Karen National Union chairman Saw Mutu Say Poe visited China to meet with the Envoy for Asian Affairs Sun Guoxiang, before travelling to Laiza, the headquarters of the Kachin Independence Organisation, to meet with leaders there.

Harn Yawnghwe, executive director of peace process support group EBO Myanmar, and son of Burma’s first president, Sao Shwe Thaike, joined Mutu Say Poe on his visit to China and Kachin State. He spoke with Paul Vrieze by email about the reasons for the trip and what needs to be done to get the peace process back on track.

Has there been a renewed effort by China to be involved in Myanmar’s peace process in recent months?

Yes, they are worried about the uptick in the fighting on the China border in northern Shan State and Kachin State, which has triggered a flow of civilian IDPs [internally displaced persons] towards the China border. They do not want the unrest in Myanmar to trigger social unrest in China. China believes that only with peace and stability in Myanmar can China’s investments and economic interests yield results.

The KIO and the KNU have worked together since the late 1950s. After the KIO signed a ceasefire with the Myanmar Government in [1994] the relationship became estranged and contacts were cut. In 2007, when the KIO came under Myanmar army pressure to become a Border Guard Force, General Mutu, then the commander of the KNU troops, visited Laiza to encourage the KIO and see what could be done to help.

When Myanmar troops broke the ceasefire in [2011] and fighting restarted, the KIO and KNU began working together again and formed the UNFC [United Nationalities Federal Council].

While they had differences, relations remained cordial until the KNU signed the NCA in October 2015 and the KIO broke off relations. On January 20, KNU chair Mutu and KIO vice chair N’Ban La met at a dinner in Chiang Mai and exchanged views. N’Ban La invited Mutu to Laiza to meet with the recently formed 38-person Kachin Political Consultative Team to brief them on how he saw things.

It was agreed that it was best to travel to Laiza via China. Mutu applied for a Chinese visa in Yangon and was interviewed. The embassy immediately organised for Mutu to meet with Chinese Special Envoy Sun Guoxiang in Kunming on his way to Laiza.

In Laiza, KNU Chair Mutu met with the Kachin Political Consultative Team and the Central Committee of the KIO. But at no time did the KNU pressure the KIO to sign the NCA as suggested [in news reports]. The KNU merely explained why it had signed the NCA when it did.

The KNU said that whether the KIO signed or not, is its own business [On February 16 the KIO and KNU released a joint statement calling for an end to the fighting and for political dialogue to be re-convened.].

Is this the first time that a KNU leader went to China to discuss Myanmar’s peace process?

This is the first time KNU Chair Mutu has met Sun Guoxiang on a one-to-one basis. Formerly, China used to see the KNU as a Western-influenced ethnic armed group. In the 1950s and the 1960s, the KNU used to cooperate with the KMT [Kuomintang] in Thailand. 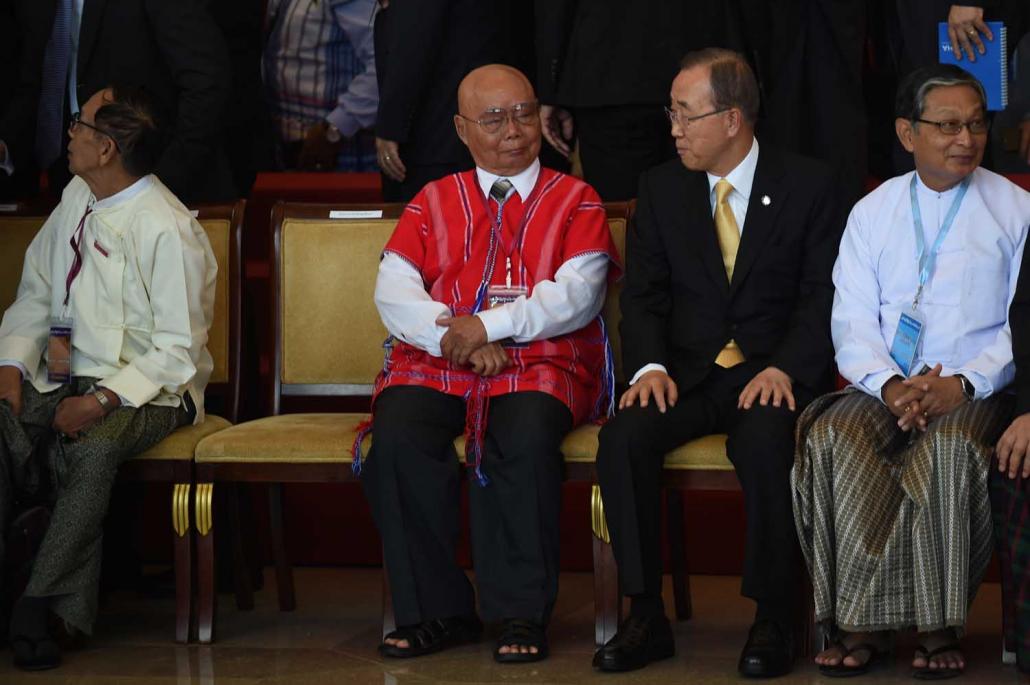 Sun Guoxiang made it clear that China would not intervene in Myanmar as it did in the past [1968-1989 when it supported the Communist Party of Burma]. It will not be a judge or an arbitrator, but it would like to see peace and stability in Myanmar.

To achieve this, China believes that the process should include every group and that every group should sign the NCA. It will encourage and actively facilitate meetings between the various ethnic armed groups if their aim is to achieve peace.

Are the KNU and other NCA signatories interested in letting China play a role as arbitrator in the peace process?

Not as an arbitrator, but if China sticks to the conditions outlined by Sun Guoxiang, I believe that neither the government of Myanmar nor the NCA signatories would object to China’s involvement.

The NCA signatories want everybody included in the peace process so that the political dialogue for a federal union can begin in earnest. Without everybody, the dialogue will be limited and the outcome not complete.

On February 24, the United Wa State Army and six other groups issued a statement demanding a new NCA with an alternative peace accord. It also called for China and the UN to arbitrate the process. What do you make of this development? Is the NCA process in danger of being abandoned by ethnic armed groups?

What the UWSA is proposing is something totally different. It is up to the government to decide whether or not it wants to start another process with the UWSA, in parallel to the NCA or to continue the NCA process without the Wa.

How would you describe the progress of the NCA’s National Dialogue in recent months under the National League for Democracy government? Have there been any major problems? There were reports of authorities interfering with dialogues in Shan and Chin states for example.

First, the JMC [Joint Monitoring Committee] to monitor ceasefires, but instead of being a neutral or joint body, the Tatmadaw dominates.

Second, the UPDJC [Union Peace Dialogue Joint Committee] is to manage the political dialogue jointly. Instead of joint decisions, the State Counsellor dominates. She decides what is acceptable and what is not. It also seems that she consults bilaterally with the Commander-in-Chief [Senior General Min Aung Hlaing] on what is acceptable. From time to time, the Commander-in-Chief also dictates what can be done, for example on the sub-national dialogues in Shan State and Chin State, etc, to which authorities objected.

Third, if there are problems within the JMC and the UPDJC, the JICM [Joint Implementation Coordination Meeting] is supposed to decide. The JICM has met only once, on August 24, 2016, at the request of the NCA signatories.

In addition to these technicalities, there is a problem of concept. The U Thein Sein government initially had the same problem. They thought the ethnic issue was primarily an economic issue – give them economic opportunities and the problem is solved. They found out that this was not so. The basic issue is equality.

The ethnic people feel they have lost their land and ownership of their land. They feel the Bamar do not recognise their rights and treat them as inferiors – uncivilised hill peoples, people who have to be told what to do.

Unless and until the current government understands this, prospects for the peace process will remain bleak. Peace cannot be forced. Military pressure will only strengthen their determination to resist. This, added to the ill-prepared peace conferences, does not paint a rosy picture for the future.