The establishment of an arbitration centre and commercial court system, and training of judges and arbitrators, would facilitate investment and ensure disputes are settled equitably.

AS MYANMAR looks to attract increased levels of foreign investment, various new laws have been or will soon be enacted. These include the Financial Institutions Law and the Condominium Law, which have both been enacted, and the Companies Law and the Investment Law, which are still in draft form.

All of these are potentially important developments. But for foreign companies, the legal framework is only one factor to consider when investing. As the International Bar Association stated in its December 2012 report, The Rule of Law in Myanmar: Challenges and Prospects, “rules are only ever as sturdy as the mechanisms that apply or enforce them”.

In the 1950s Myanmar had a strong, well-educated and independent judiciary. The Burma Law Reports of that era were on a par with those of Hong Kong, Singapore and many other common law jurisdictions. However, thereafter the courts were severely weakened and the number of high-quality reported judgments dwindled.

Substantial effort and resources will have to be invested in reforming Myanmar’s judiciary and rebuilding its courts. While some progress is being made, this is a mammoth task and inevitably will take time.

As a general rule, foreign investors prefer to resolve disputes with local partners through international commercial arbitration in a neutral venue and not in the domestic courts of the jurisdiction in which they are investing.

Arbitration involves a third party or parties acting in a quasi-judicial role to resolve disputes in private and with binding effect – it results in an arbitral “award”, which is akin to a judgment. Arbitration is a form of alternative dispute resolution in the sense of being an alternative to litigation in a court of law.

As at the time of writing, 157 countries have acceded to this Convention and thereby committed to enforce arbitral awards made in other convention countries. There is no treaty for the recognition and enforcement of foreign court judgments that can boast anything close to this number of signatories.

Myanmar acceded to the New York Convention in 2013 and earlier this year it enacted a new Arbitration Law, which serves as the domestic implementing legislation to give effect to Myanmar’s obligations under the convention.

While accession to the convention and enactment of the new law were significant steps in the right direction, it is important also to ensure that sufficient Myanmar lawyers and judges are familiar with international commercial arbitration. This month the International Chamber of Commerce (ICC), one of the leading arbitral institutions in the world, is holding a two-day workshop and a seminar on arbitration at the headquarters of the Union of Myanmar Federation of Chambers of Commerce and Industry (UMFCCI) in Yangon.

Events such as these should be welcomed and encouraged. There is also a need to make meaningful progress toward the establishment of a Myanmar Arbitration Centre, which could then serve as a focal point for various arbitration activities .

It is absolutely crucial that a group of Myanmar judges is able to deal competently and confidently with enforcement of foreign arbitral awards under the New York Convention. Several workshops have been held for select judges on this subject and there are arbitral institutions and organisations willing and able to provide more intensive capacity building in this field.

However, at the moment it appears to be a matter of chance as to whether or not an arbitral award (foreign or domestic) would be referred to a judge with knowledge of and exposure to the convention or to a judge with no such knowledge and exposure. It would make sense for the courts to establish an “arbitration list” and for relevant judges to be designated to that list.

Notwithstanding the interest in arbitration, many commercial disputes in Myanmar are resolved through informal mediation, involving an influential body or individual. When handled properly, mediation is a voluntary process in which the third-party mediator assists the parties to achieve a negotiated binding settlement. However, according to anecdotal evidence, informal mediation in Myanmar has sometimes led to a highly unjust result in which the “mediator” has simply imposed an arbitrary decision on the weaker party.

The risk of such conduct can be reduced by establishing an organisation (or branch of an international organisation) that deals with accreditation of mediators and ensures quality control. Potentially, this is something that could be affiliated with or attached to a Myanmar Arbitration Centre.

In view of this, it is clear that some commercial disputes will go to court. There is a strong case for Myanmar to establish a specialist commercial court, as several other jurisdictions have done. This would be staffed by a small number of judges with experience handling commercial disputes or the willingness and ability to specialise in the field.

The commercial court could be given jurisdiction to deal with any and all commercial disputes, ranging from sophisticated, international financial transactions to straightforward debt collection. Alternatively, at the outset it might be given jurisdiction only where all parties have agreed, either before or after the dispute has arisen. Either way, it would carry out its functions in an independent manner, in accordance with the laws and regulations establishing it.

Given that English is the language of commerce, it would make sense for the commercial court to have the capacity to hear cases in English (or bilingually in English and Myanmar) where one of the parties elects that. Potentially it could also perform a role in supervising arbitration and dealing with enforcement of arbitral awards – it might eventually replace the “arbitration list” referred to above.

It would make sense for the commercial court to be located in Yangon, the commercial capital of Myanmar. It would need to be housed in a well-equipped, modern or suitably renovated building. It might have a small number of branch courts elsewhere in the country or its judges might go on “circuit” to the other major cities.

It would apply proactive case management in order to move cases forward and this would include assigning each case to an individual judge at the outset. That judge would be tasked with ensuring that each case progresses promptly to trial. Such continuity of management would provide many benefits, including accountability. The commercial court would use technology to achieve efficiencies but would do so in an appropriate manner commensurate with the resources of the lawyers appearing before it.

Establishing such a commercial court may appear challenging but, as indicated above, other jurisdictions have done so successfully. They are willing to share their expertise and experience and, indeed, to assist Myanmar with this project, should it wish to receive such assistance.

If a commercial court is established and is properly resourced and managed, not only will it increase confidence among foreign and domestic investors but it may also serve as a model for broader reforms.

Robert San Pe is a British and Hong Kong-qualified lawyer of Myanmar descent who works at international firm Gibson, Dunn & Crutcher. He has advised Daw Aung San Suu Kyi on legal affairs but the views expressed above are his personal views and not those of the government or the National League for Democracy. 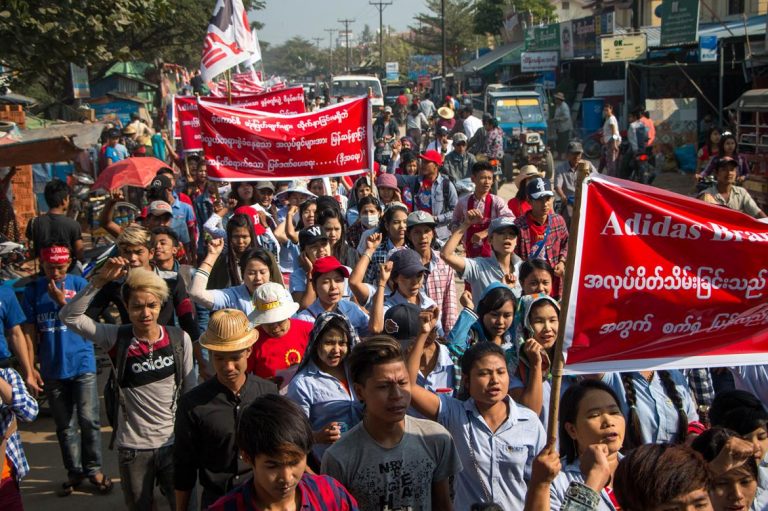 Hundreds jobless as Adidas supplier shuts down amid dispute

More than 700 workers have been left jobless after the closure of a Yangon shoe factory that had defied an order to reinstate a sacked workplace labour union member.
BY Kyaw Lin Htoon 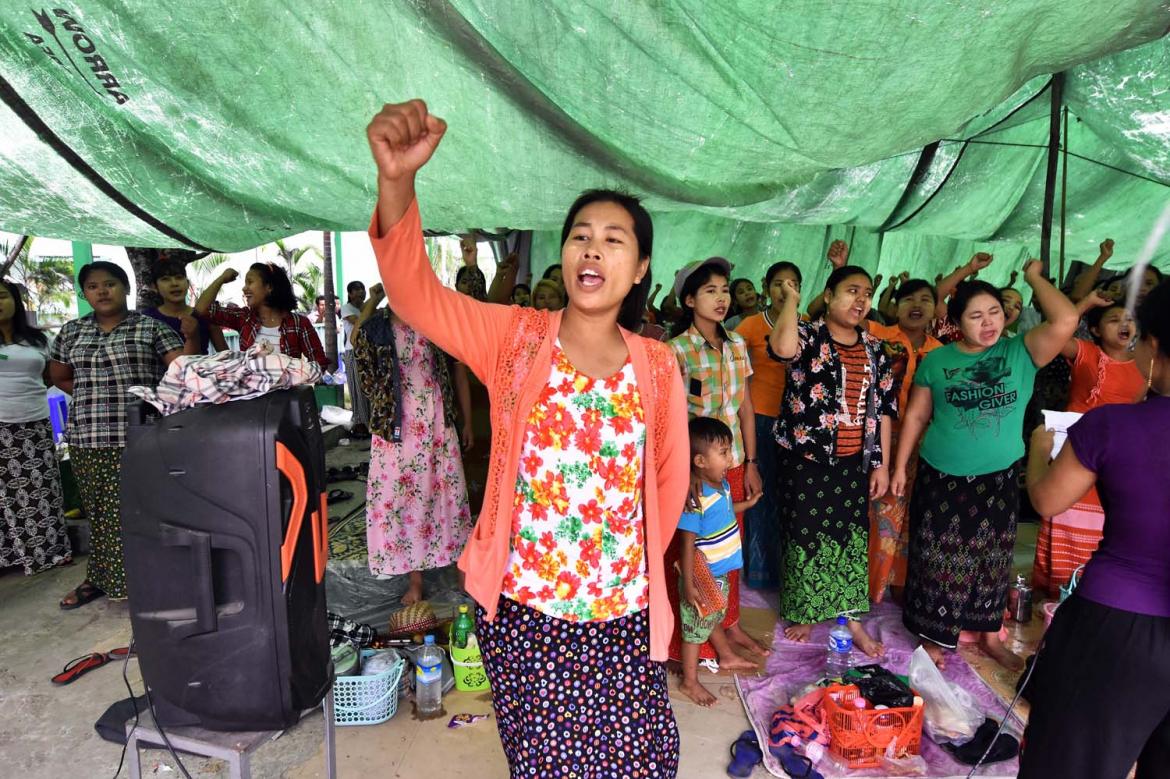 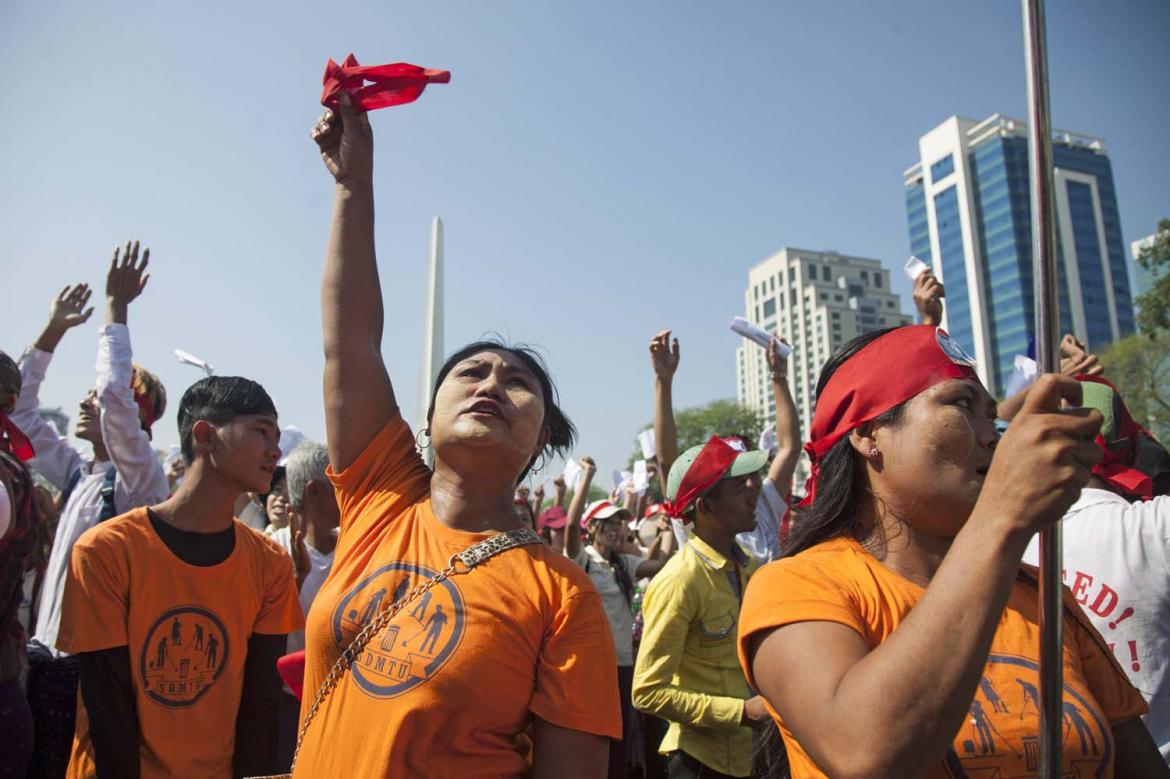 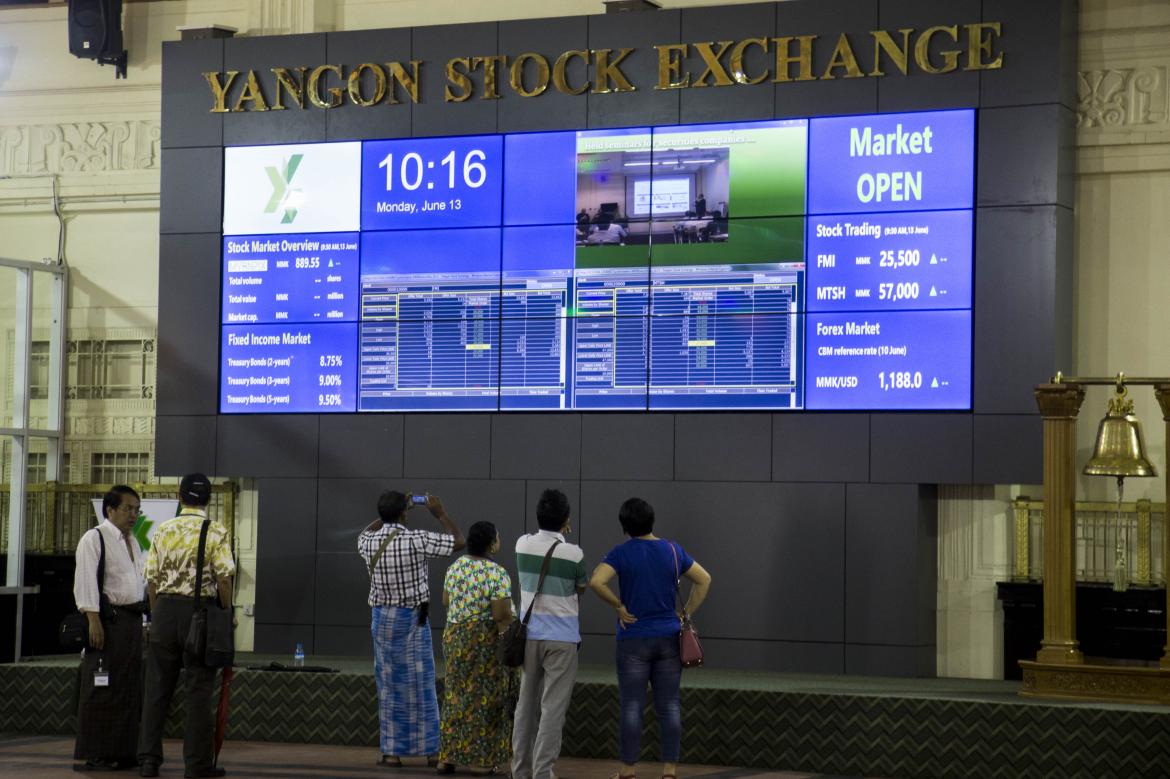