Business groups are furious about a move to introduce jail terms for violations of a labour dispute settlement law, but lawmakers and trade unions say it is the only way to ensure compliance.

BUSINESS LEADERS and the International Labour Organization have criticised proposed changes to a labour law that could see employers and workers jailed for even minor violations, such as failing to attend arbitration hearings.

Lawmakers and labour groups have said the changes to the Settlement of Labour Disputes Law are necessary because the weak penalties in the law encourage employers to ignore labour council rulings. Businesses, however, have warned that the changes could deter foreign investment.

The amendment bill proposes prison terms of up to six months for employers and a month for employees, as well as raising the minimum fine for some offences to K10 million.

The current minimum penalty for violations ranges from K500,000 to K1 million depending on the nature of the offence.

The changes to the 2012 law were approved by the Amyotha Hluttaw in June and sent to the Pyithu Hluttaw on July 23. However, lawmakers in the lower house are yet to discuss the bill.

The nation’s peak business body, the Union of Myanmar Federation of Chambers of Commerce and Industry, is among those that have hit out at the amendments.

“We are very concerned about it, not because we industrialists wish to violate the law, but because of the negative impact it could have on the whole business community,” said Daw Khine Khine Nwe, who is joint secretary general of both the UMFCCI and the Myanmar Garment Manufacturers Association.

She agreed that there were problems with employers ignoring rulings by the Arbitration Council – a 15-member body representing workers, employers and the Ministry of Labour, Immigration and Population – but said this problem could be addressed through increasing the fines significantly.

“Disputes between employers and workers should only be solved through arbitration,” she said. “A punishment like a prison sentence should only be applied for offences of a very serious nature.”

Foreign companies have also warned that if the amendment bill is approved it may discourage foreign investment.

Speaking at a UMFCCI-organised seminar on July 14, Mr Sandy Chapman, the public affairs, communications and sustainability director for Coca-Cola ASEAN Big Markets, said the company wanted to expand its presence in Myanmar but a decision would depend in part on the legal framework.

“Of course, we want to expand our business here in Myanmar, but to be able to do so, we need an environment which could encourage us with fair laws,” he said at the seminar, “Implications of Business-related Laws: Impact on Investment and Economic Development”.

Amyotha Hluttaw MP U Kyaw Htwe (National League for Democracy, Yangon-8), who helped draft the law as a member of the Upper House Local and Overseas Employment Committee, defended the amendments, saying there was nothing unusual about jail terms for labour law violations and they applied in some ILO member countries.

“As the people’s representatives, we cannot act only for one side,” Kyaw Htwe said.

“When we were drafting the amendments we considered many points of view and reviewed cases from recent years. There are a lot of cases where business owners ignored the ruling of the Arbitration Council and just gave a K1 million fine. Only by imposing prison sentences can we stop such behaviour,” he said.

He confirmed that the prison penalties could apply for minor violations, such as not appearing at arbitration hearings. He said this was the only way to force employers to attend Arbitration Council hearings.

The amendments have been welcomed by labour rights activists, who believe workers will benefit because employers will no longer ignore the law.

Among those who have welcomed the amendments is U Htay, a lawyer and one of the five labour representatives on the Arbitration Council.

“We need these amendments. The stronger punishments will ensure that both sides respect the council and the law, and give us a better chance of addressing the disputes,” he said.

A problem of penalties

Preparations for amending the Settlement of Labour Disputes Law began after the NLD took office in 2016. The Amyotha Hluttaw’s Local and Overseas Employment Committee sought the changes because it believed the law was weak at resolving labour disputes.

The 2012 law was amended in 2014 to increase penalties, including a fine of at least K1 million for employers who ignore rulings of the Arbitration Council.

Some lawmakers pushed then for prison terms to be introduced then, but the hluttaw decided against it because of warnings that it would harm Myanmar’s attractiveness as an investment destination.

Lawyer U Than Maung, who has represented the UMFCCI on the Arbitration Council for more than six years, is disappointed that employer representatives were not invited to discuss the amendment when it was being considered in the Amyotha Hluttaw.

“Because we judge so many cases on the council, we are worried about the effect of jailing people for violating the law. But the day I am afraid of is drawing near with the draft amendment knocking on the door of the Pyithu Hluttaw,” Than Maung said.

He said his concern was based on the number of times he had acted on behalf of employers in cases arising from the unjust behaviour of workers.

“And the law is dangerous for not only the employer but also the employee, as either could be sent to prison,” he said. 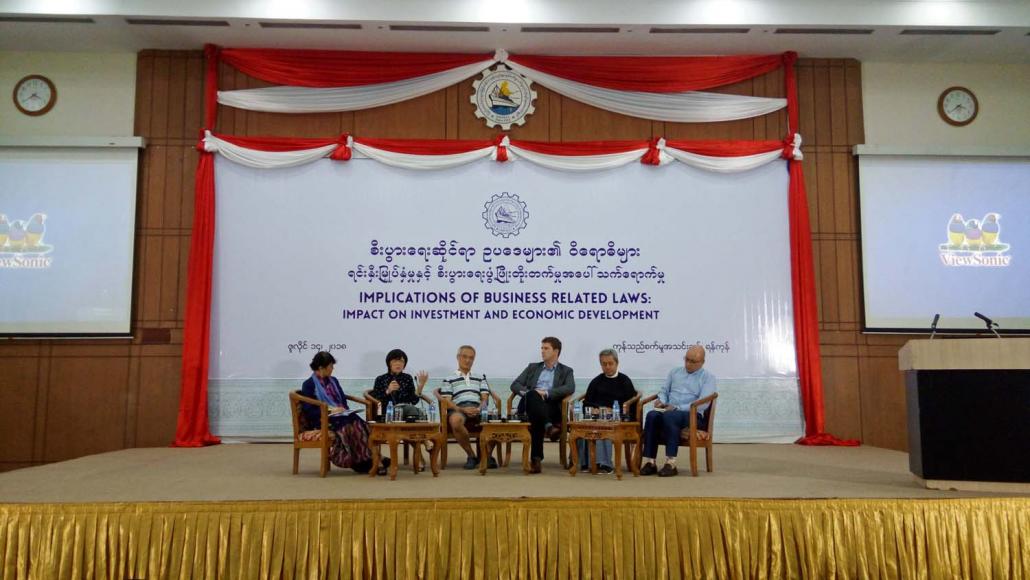 Panellists speak at a seminar focused on the draft labour law and other business-related laws held at the UMFCCI on July 14. (Kyaw Lin Htoon | Frontier)

Kyaw Htwe dismissed concerns from employers about the amendments, saying that if they ran their businesses responsibly they would never be at risk of imprisonment.

“Some have expressed the opinion that the law, if amended, could become an obstacle for foreign investment but that is ridiculous,” he said. “We don’t need to follow international practices; we need to make laws which are suitable for our country – other countries do exactly the same thing.”

Officials from the Ministry of Labour, Immigration and Population who worked with the Amyotha Hluttaw committee on the amendments said they were in accordance with the practices of the ILO and other labour-related conventions that Myanmar has signed.

“For the government, we just have to obey what the lawmakers make since they have the legislative right. So the only comment I can give is that putting prison sentences in this kind of labour dispute law is normal,” said U Myint Kyaw, director of the Department of Labour Relations.

But the ILO liaison officer in Yangon has warned against including penalties for minor infractions in the law.

Mr Rory Mungoven said the ILO – which met several times with Kyaw Htwe’s committee while it was drafting the amendments – believed that such strong penalties should only be applied in the most serious cases.

“The penalties should be tough enough to be a deterrent, but not to imprison employers over very minor infractions, especially when the law and judicial system is still weak. This can also discourage foreign investment in the country,” he said.

While labour organisations have welcomed the tougher penalties, they are unhappy about the absence of collective bargaining from the amendment bill. Like employer groups, they are also lobbying parliamentarians to change the draft that is presently with the Pyithu Hluttaw.

The introduction of collective bargaining would enable labour organisations to negotiate pay and conditions with employers on behalf of workers in their industry.

“We are satisfied with the prison penalties but the law doesn’t provide a mechanism for collective bargaining – instead, it forbids it completely,” said Daw Phyo Sandar Soe, the joint general secretary of the Confederation of Trade Unions of Myanmar. “The lack of collective bargaining has meant employers have been able to introduce unfair conditions, such as the right to apply any sort of internal punishments.”

Mungoven said the ILO had also recommended that parliament consider collective bargaining, but only with recognised labour organisations and trade unions.

“Having a fair and reliable dispute settlement system is really important for industrial peace and Myanmar’s economic development,” he said. “It is also important to prevent disputes, and one of the best ways to do that is to promote collective bargaining between the trade unions and employers.”

He added that it was important for lawmakers to consider the views and recommendations of all stakeholders, as it would make the amended law more effective and easier to apply.

But Kyaw Htwe said workers and trade unions were “not mature enough” for collective bargaining, and that allowing it could lead to “more protests and riots”.

MPs say the draft could be discussed in the Pyithu Hluttaw as soon as late August but more time might be needed because of the lobbying efforts of employers and labour groups.

Khine Khine Nwe urged lawmakers to consider the broader implications for the economy of approving the amendments.

“If these amendments go through they will create big problems for industries that have to employ a large number of workers,” she said. “The result will be fewer job opportunities.”

A boycott launched in the wake of the February 1 coup has caused sales of Myanmar Beer to plummet – and may even have wiped US$1 billion off the value of its military-linked parent company.
BY Frontier