Repositioning Myanmar through the Belt and Road Initiative

The ambitious project being pushed by Beijing could have a significant impact in Myanmar, not least for the country’s long drawn-out peace process.

IN MAY, just months after United States President Donald Trump pulled his country out of the Trans-Pacific Partnership, his Chinese counterpart Xi Jinping invited dozens of world leaders to Beijing to showcase his ambitious Belt and Road initiative, which was first announced in 2013.

The TPP was a cornerstone of former president Barack Obama’s Asia policy, but President Trump’s removal of the US from the agreement, and the country’s apparent shift away from the region, has created an opportunity for China to increase their influence.

Xi upped the stakes at the end of the conference by pledging at least US$124 billion to the initiative. In 2013, he had estimated an overall financial commitment of $5 trillion to be spread over 65 countries.

Belt and Road is not an entirely new initiative, but rather a revival of the ancient Silk Road (the “Belt”), which connected China with Europe, and the Maritime Route (the “Road”), which was used by renowned mariners from the Ming dynasty.

The non-binding, loosely formed “member states” of the Belt and Road initiative represent China’s principles in international relations, trade and commerce as described by Henry Kissinger in his book On China.

Competing for the Indian Ocean

Since the 1960s, Japan has invested heavily in infrastructure in the Indian Ocean, particularly close to the ports of East Africa. The Belt and Road has challenged Japan’s position in the ocean, prompting it to announce plans to fund more than 60 projects in Africa, worth a total of $30 billion over three years. Pakistan was previously a major trading partner with Japan, but drifted towards China after the China-Pakistan Economic Corridor was initiated. This was a major setback for Japan’s “blue water economy” in the Indian Ocean.

Like China, Japan has invested heavily in Myanmar as part of its “Indian Ocean Economy”. Large-scale infrastructure projects including Thilawa port and involvement in the Dawei Special Economic Zone show the strategic importance Japan sees in Myanmar. India is not partaking in Belt and Road due to sovereignty concerns over its border with China, but New Delhi has strengthened economic ties with Japan to invest in Myanmar as well as ports along the Indian Ocean aimed at countering China’s planned dominance. Myanmar can seize this opportunity as leverage for economic growth.

Myanmar on the Belt and Road

Although situated at the crossroads of China and India, Myanmar has played only a minor role in trade and commerce since the end of British colonisation in 1948. Insurgencies in the northeast of India, and civil war and insurgency throughout Myanmar since independence, have severely damaged the infrastructural capabilities of this nation in terms of trade and commerce.

After the fall of the Communist Party of Burma in 1989, the town of Muse, on the Myanmar-China border in northern Shan State, became a crucial route for bilateral trade. In the 2016-17 fiscal year, bilateral border trade was $5.9 billion, and exports through Muse accounted for 40 percent of Myanmar’s total that year. Although many of Myanmar’s goods are sold to China, much of it is not officially recorded in China as some of the major commodities, such as rice and sugar, are considered restricted on the other side of the border. This favours China in the pricing of commodities and creates risks for Myanmar traders.

Although China’s investment in Myanmar is low compared to Singapore and Thailand, Beijing has made significant investment in its southerly neighbour. The seaport in Kyaukphyu and the Kyaukphyu-Kunming oil and gas pipelines are considered strategic infrastructure projects. Recent reports that China is seeking 85 percent equity in the Kyaukphyu port have not been confirmed but that move has been regarded as an act of Chinese “colonisation” by much of Myanmar’s public, which still harbours distrust towards China’s intentions in the country.

During the Belt and Road summit, the Myanmar government signed five agreements with China, from economic and technical cooperation to healthcare and cultural heritage assistance. Myanmar’s access to the Indian Ocean will also play a crucial strategic role in the “Road” element of the initiative, China’s blue water economy in the Indian Ocean.

The planned Bangladesh-China-India-Myanmar (BCIM) corridor may no longer be realistic due to India’s withdrawal from Belt and Road, and border issues between Myanmar and Bangladesh. However, upgrading the route from Kyaukphyu to Kunming, which is essential for access to the Indian Ocean, could affect the political landscape in Myanmar.

The Mandalay-Muse highway, which has been the scene of sporadic fighting between the Tatmadaw and the Northern Alliance since November, would require upgrading. In order for trade to be efficient, stability along the road must be achieved by both the Myanmar and Chinese governments. 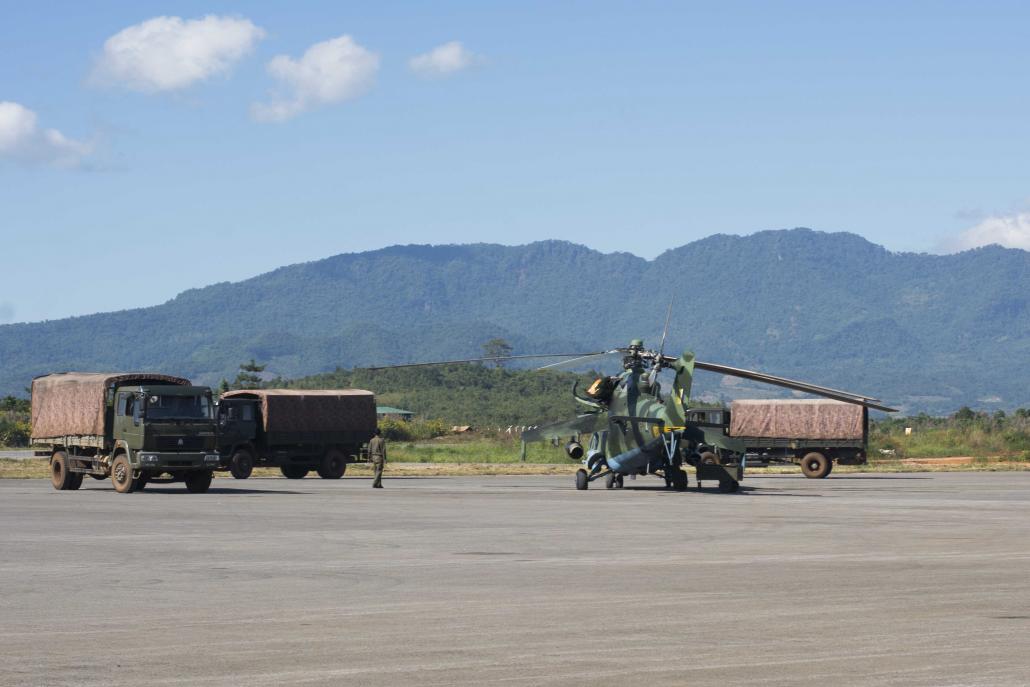 The Mandalay-Muse highway was temporarily closed in November last year after fighting broke out between the Tatmadaw and the Northern Alliance. (Teza Hlaing | Frontier)

The Northern Alliance – a coalition of troops from four ethnic armed groups – will be crucial for stability along this road. The alliance is part of the United Wa State Army-led Federal Political Negotiation and Consultative Committee, which has rejected the government’s Nationwide Ceasefire Agreement and is calling for a new path to peace. China can benefit through stabilising and helping to establish peaceful ties between the groups and the government, using this as leverage to establish dialogue with the Myanmar government.

The so-called “Panghsang Agreement” signed by the FPNCC clearly stated support for the Belt and Road initiative. As implementation advances, increased dialogue with the Northern Alliance is inevitable, creating a new phase in Myanmar’s peace process. In addition, China also needs to revise its policy on the restricted commodities and ensure transparent procedures along the border to mitigate illegal trade, something that is a prerequisite for flourishing commerce.

It is too early to conclude whether or not the Belt and Road initiative will be fruitful, but it has created the potential for a political shift in Myanmar. China and Myanmar need to be centered around a coalition similar to India and Japan’s. Over the next four years, much of Myanmar’s hope lies to the east.

The views and opinions expressed here do not necessarily reflect the policies or positions of The Asia Foundation and Stimson Center. TOP PHOTO: Oil tanks under construction in Kyaukphyu, Rakhine State, in 2012. (AFP)