Rebels in the NLD ranks as Yangon MP discontent grows

Lawmakers have accused the Yangon Region government of failing to disclose information to parliament amid suggestions of a power struggle within the National League for Democracy.

ON MAY 28, the Yangon headquarters of the National League for Democracy hosted an unusual meeting. Overseen by U Win Htein, it brought together party executive committee members, officials from the Yangon Region government, including Chief Minister U Phyo Min Thein, and NLD lawmakers in the regional assembly.

According to a short report in state media, the “tripartite meeting … was held to show unity to the country and the world”. What went unsaid was why the show of unity was necessary: In recent months the relationship between the regional government and local lawmakers has broken down to the point that they are barely talking to each other. Lawmakers have accused the chief minister and his government of failing to keep them properly informed them about its activities, or seek their approval for major projects.

Attendees were told not to discuss publicly the topic of the May 28 meeting or what was said between participants. However, several sources told Frontier that Phyo Min Thein accused lawmakers of releasing sensitive information to the media shortly after it had been disclosed to them by the government in closed-door meetings.

“Phyo Min Thein gave the example of when he needed medical treatment. He told Hluttaw members and then some told the media; he said this affected the regional government,” one source said.

“He said that because of this the regional government didn’t want to report anything to the lawmakers any more.”

Lawmaker Daw Sandar Min, who chairs the powerful Planning and Finance Committee, rejected Phyo Min Thein’s allegations. “No lawmakers are releasing secret information. Actually it’s the government staff who are doing this, because they know about government plans before we do,” she said.

“Members of the hluttaw just want to discuss projects that affect voters. They are meeting with people and conducting research on the ground to report to the Hluttaw. That’s our duty. I don’t believe that anyone is doing what the chief minister is accusing them of.”

Several lawmakers confirmed to Frontier that in calling the meeting the party hoped to negotiate a resolution to the dispute.

Party spokesman U Nyan Win said that all state and region governments needed to be transparent to both the Hluttaw and the public about their activities.

“If they are not, then voters will blame the government and this will have an effect on the party,” he told Frontier.

The state media report suggested that the tripartite meetings would be called every 45 days. Nyan Win said the NLD would also form a team to ensure the smooth release of data and news from the government and parliament. “For that though we’ll need to take some time,” he added.

At a press conference in April, shortly before Thingyan, Phyo Min Thein told reporters, “Don’t criticise the regional government on behalf of someone who wants to be popular.” This was widely interpreted as an attack on some lawmakers.

By this point, the dispute had been festering for some time. An early source of contention was the government’s decision to continue with the Southwest New City, a controversial development project over the Yangon River initiated by the previous government. Since it was first proposed it has been mired in allegations of corruption and mismanagement, yet Phyo Min Thein stuck with the winners of a tender conducted shortly before the handover of power in March 2016.

In January there was widespread criticism over the draft 2017-18 budget, both the continuation of controversial projects and the lack of time lawmakers had been given to review the document.

But it was during the fourth session, which comprised 16 sitting days in March, April and May, that tensions truly came to a head.

A flashpoint occurred on March 24, when nearly two dozen lawmakers discussed the government’s efforts to reform the city’s bus system, including the launch of the Yangon Bus Service two months earlier.

Some of these lawmakers noted that people were so fed up with YBS that they had taken the government’s slogan, “Pyithu Atwet YBS” (YBS for the people), and were instead joking, “Pyithu Seit Pyet YBS” (YBS for disappointment).

After the discussion, Yangon Region Minister for Electricity, Industry and Transportation Daw Nilar Kyaw dismissed the criticisms as politically motivated.

Shortly afterward, Phyo Min Thein privately asked senior lawmakers to ensure that no more questions about YBS be submitted to the hluttaw.

Lawmakers’ frustrations with YBS can be traced to before its launch in January. Although a significant undertaking affecting millions of Yangon residents, they were only told by Nilar Kyaw of the plan five days earlier.

But U Kyaw Zeya (NLD, Dagon-2) said YBS was one of just many examples where the regional government had failed to keep lawmakers properly informed – let alone seek their input.

“There were many other projects that were not reported to the assembly and the government didn’t discuss them with us at all,” he said.

“If they are going to follow the constitution they need to [seek approval from the hluttaw] but the regional government has not been doing this,” Kyaw Zeya added. “So I can say they need to improve the transparency of their institution.”

Lawmakers were also recently frustrated by the government’s refusal to explain how it plans to respond to the Yangon Region Auditor-General’s report for 2015-16, which uncovered numerous legacy projects in which companies were being rented public land at a fraction of the market rate. Most are in public parks, such as Mya Kyun Thar, Kandawgyi, Kantawmin and People’s Park. Both the auditor’s office and lawmakers have called for the rental rates to be increased.

“Most of the time the mayor is travelling. Those [official] trips might be good experience but if it means he can’t respond to the Hluttaw then another person needs to be assigned to do it,” Kyaw Zeya said. “For now, we still don’t know what action the government will take on this audit report.” 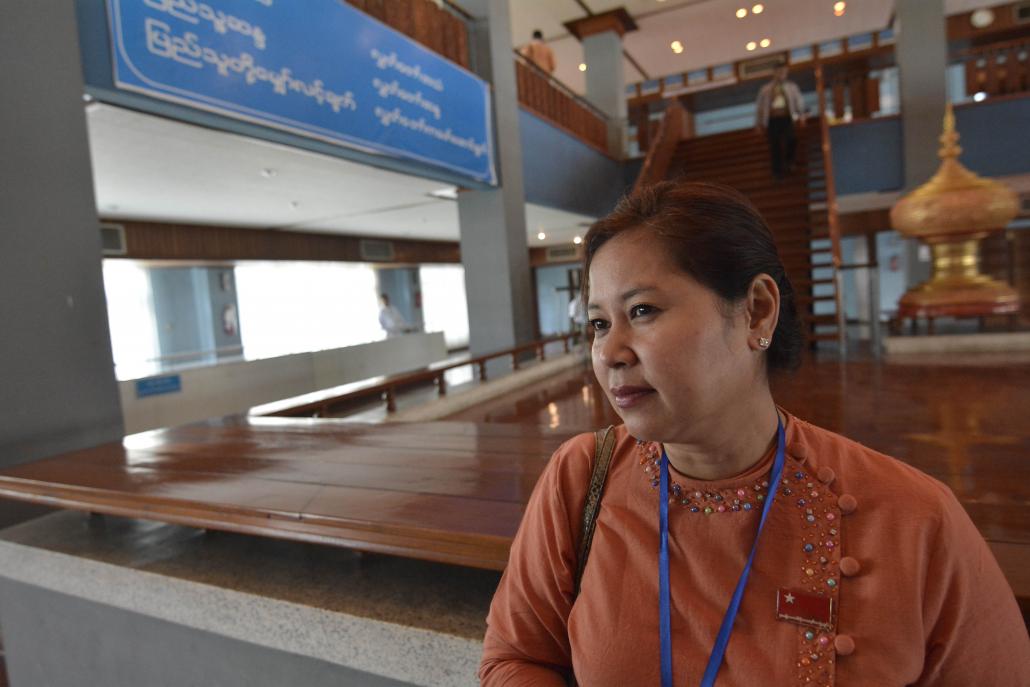 Sandar Min’s committee has been leading the fight with the regional administration. During the hluttaw’s fourth session, it took the government to task over the Southwest New City, YBS, water distribution and its water taxi tender.

She told Frontier that there was no culture of transparency or cooperation within the government, and expressed frustration at the administration’s refusal to respond to reports prepared by her committee. She said lawmakers had written these reports to “reflect the voice of the voters”.

“If the regional government is going to be transparent about its projects, it needs to report them to the assembly. The government needs to accept suggestions and discussions on any project – that is what the constitution says.”

Not all lawmakers are so confrontational, though. U Nay Lin Aung (NLD, Thanlyin-1) said that sometimes lawmakers asked questions that were simply not significant enough to discuss in parliament.

“The government has a duty to answer questions for very important projects that use a lot of public money,” he said. “But we can’t expect them to answer about small things. We can solve them by negotiating with township officials instead of raising them in parliament.”

The squabbling may also be driven by concerns over the government’s performance. As initiatives like YBS and the night market flounder, lawmakers have complained that part of the problem was that they were not consulted.

“I don’t know about the conflict between the government and assembly but I can say that YBS is not different with [its predecessor] Ma Hta Tha,” she said.

“We are facing more difficulties now … so I want to ask them, please help and solve our difficulties. Commodity prices are still going up. We don’t know what are they doing right now exactly but they have a duty to develop the country. I really hope that we can have a better future.”

Daw Nyo Nyo Thin, an independent lawmaker in the previous assembly, said she was concerned that lawmakers seemed to know little more than the public about what the regional government was doing.

“The lawmakers don’t even know what tenders the government is doing. They’re not seeking permission for projects – there’s no transparency at all,” she said.

She said even the former regional government, led by current vice president U Myint Swe, had shown more respect to lawmakers.

“They weren’t totally transparent, but at they explained their projects to the assembly and took suggestions from opposition lawmakers. They would negotiate with us for a better outcome,” she said. “So I can say that the previous government is more transparent. The current government clearly doesn’t care about its responsibilities to the parliament.”

Lawmaker U Tin Win (Union Solidarity and Development Party, Coco Island-1), who served as border affairs and security minister in the previous regional government, said the dispute reflected a lack of experience on the part of Phyo Min Thein’s government.

“They have a very big weak point, which is that they didn’t report some big projects to the Hluttaw and as a result lawmakers are angry about it,” he said.

But he suggested it was also being driven by personal rivalries, particularly MPs who were overlooked for a position in the regional government.

NLD lawmakers though insist they are motivated only by a desire to serve their constituents and hold the government accountable.

“We are not criticising the government for no reason,” Kyaw Zeya said, adding, “We are not trying to create conflict between the government and Hluttaw. We are just doing our duty and we’ll keep doing it in the future.”