Rakhine State villages are wracked by alcohol abuse because of the easy availability of cheap moonshine and products made from ethanol.

RAKHINE STATE is notorious for the harsh wall of prejudice dividing its Buddhist and Muslim communities and the poverty caused by a lack of development, but a less widely-known problem is the damage wrought by alcohol.

Alcohol abuse is ravaging communities throughout the state and is a bigger social problem than illegal drugs, said U Oo Than Hlaing, an education official in Rathedaung Township who founded an “Association of Teetotallers” there in 2011.

Drugs are hard to obtain but shops selling alcohol products can be found in nearly every township in Rakhine. An exception are the villages that have imposed total bans on alcohol. 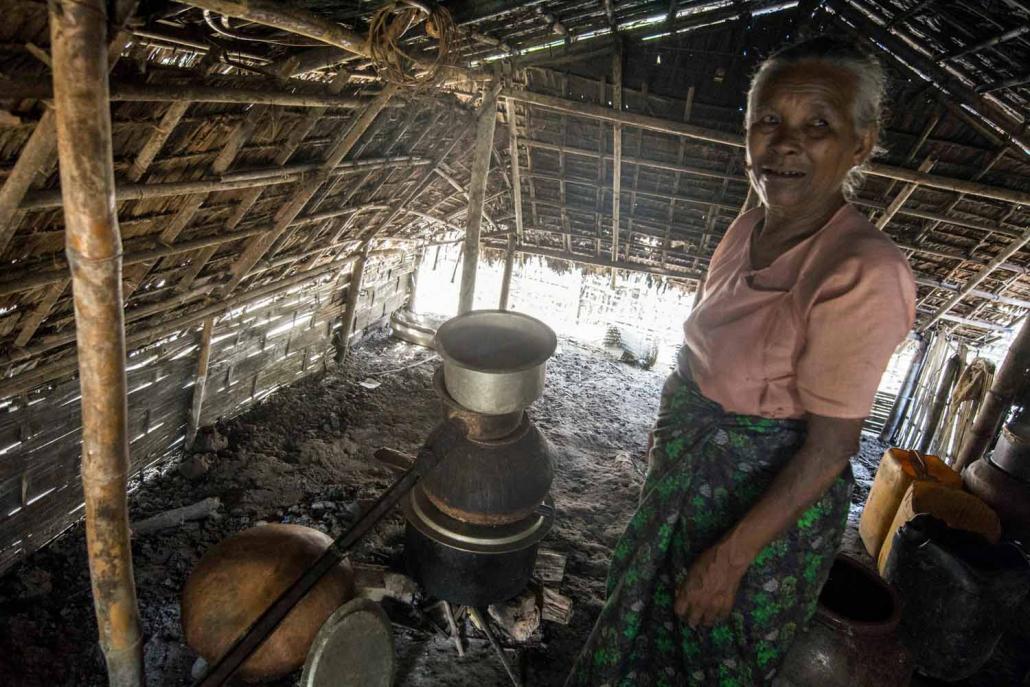 A woman makes alcohol at her home in Rakhine State. (Teza Hlaing / Frontier)

Drunken men, with an average age of about 30, are a common sight in the township’s villages. They can usually be found in groups, whiling away the day drinking and playing cards. Frontier approached one such group and asked about their work. “We do nothing but drinking,” one man replied, amid raucous laughter.

Another reason why alcohol abuse is rampant among non-Muslims in Rakhine is because traditional rice spirit “moonshine” and fake alcohol products made from ethanol are cheap.

The moonshine business is thriving in Rathedaung, one of the poorest townships in one of the country’s poorest states or regions. The decline of the fishing industry in the township has resulted in the moonshine production becoming the main source of revenue in some villages.

One of them is Pyin Khaung village, about six minutes by motorbike from downtown Rathedaung and another 10 minutes by boat on a tributary of the Mayu River. Many in the village earn a living by distilling traditional rice spirit. The main ingredient is cheap, unmilled rice. The villagers have been producing moonshine for more than 50 years and earn more from it than fishing. But that may be about to change.

In late September the township authorities announced a ban on the production of alcohol products. Some residents suspect the ban is the result of a conspiracy between township administrators and police to extort bribes from the producers.

The ban has shocked residents of Pyin Khaung, an ethnic Rakhine village about halfway between Sittwe and Maungdaw.

“The only way we can make money is by making rice spirit, there’s no other business we can do, and they are telling us that we have been doing for decades is now illegal,” said a 62-year-old woman at her home in Pyin Khaung. She asked that her name not be used because she said the police were compiling a list of all villagers suspected of distilling the spirit.

Frontier learned that villagers who are caught violating the ban are expected to pay a K5,000 bribe.

A family can make three litres of moonshine a day. They sell the spirit for K1,000 a litre to buyers from downtown Rathedaung restaurants, who dilute it with water. One litre of spirit is enough to make four one-litre bottles of booze that the restaurants sell for K1,000 each.

Rathedaung residents say that although the police are cracking down on moonshine production in villages, they don’t cause problems for the rich businesspeople whose downtown factories make fake alcohol from ethanol under the cover of producing drinking water.

“Everybody knows who is producing fake alcohol here, but no one can say it aloud because it is bigshots who are doing it, some of whom are members of the township administration,” Oo Than Hlaing, the deputy township education officer in Rathedaung for the past two years, told Frontier.

“It’s all about the authorities. They can control everything but if they are involved, a community will never be alcohol-free,” he said. 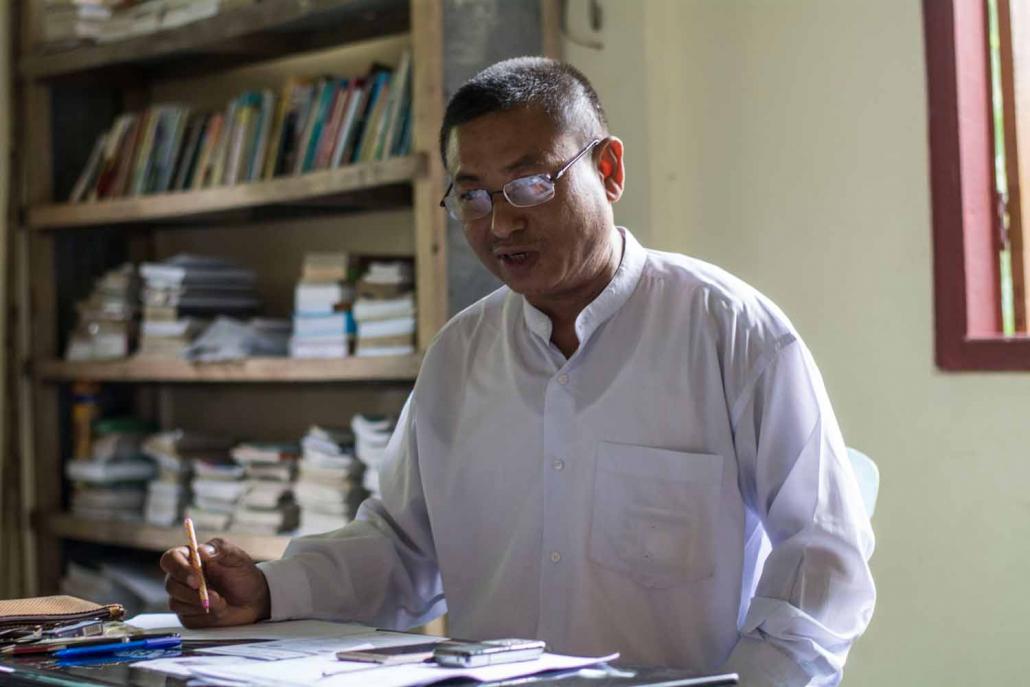 U Oo Than Hlaing speaks to Frontier at his home in Rathedaung. (Teza Hlaing / Frontier)

Oo Than Hlaing said the activities of his organisation had declined because of the work commitments of some other founding members, but the group continues to distribute pamphlets advocating abstinence from alcohol.

Although he wants Rakhine to be declared an alcohol-free zone he admits it is unlikely to happen soon. In the meantime, the association wants a tougher response from the authorities.

“We just want the rules and regulations to be tightened and enforced on restaurants and the production of fake alcohol,” he said. The association also wants the government to raise taxes on imported alcohol products and for state and regional authorities to use the tax revenue for development.

“The government should allow only high quality alcohol products to be imported,” said Oo Than Hlaing.

Pauktaw Township is another major producer of fake alcohol products, including local brands of whisky and rum. The main market for the low-priced products is adjoining Sittwe Township.

Women are among the strongest supporters of the teetotal movement in Rakhine. They have been instrumental in having the consumption and sale of alcohol products banned in two village tracts each in Minbya and Ramree townships since mid-May.

Village tract administrators supported a proposal by activist women teetotallers for any resident breaching the ban to be fined K1 million with the consensus of the community.

Arakan National Party MP Ma Htoot May, whose Amyotha Hluttaw-11 constituency encompasses Ramree and Ann townships, wants a total alcohol ban in the state and has tried to stop licences being issued for new alcohol shops in her electorate.

“When I was a teenager at my village (in Ramree Township), I could visit neighbours at night. But when I returned to my home village after 20 years I found that there were many alcohol shops and even adult women dare not go outside at night,” she told Frontier.

Ma Htoot May tried to obtain government figures on the volume of alcohol supplied to Rakhine from elsewhere and the percentage of the state’s youth and adults who consume alcohol.

Her quest was in vain. No such data was available, she was told.