Rakhine Commission of Enquiry to report back in a year

YANGON — A new commission appointed by the government to investigate allegations of human rights abuses in Rakhine State has said it will take a year to report to President U Win Myint with its recommendations.

At a press conference in Nay Pyi Taw on 16 August, commission chair Ms Rosario Manalo, a former deputy foreign minister in the Philippines, broadly outlined its mandate to probe alleged abuses by the Myanmar army in response to what she called “terrorist attacks” by the Arakan Rohingya Salvation Army.

Attacks in August last year on security posts in northern Rakhine State by the militant group, which the Myanmar government was quick to link to transnational Islamic terrorist cells, prompted a scorched-earth campaign by the Myanmar military that drove close to 700,000 Rohingya Muslims into neighbouring Bangladesh.

The campaign prompted allegations of ethnic cleansing by the United Nations and growing calls for the Myanmar government and military to be referred to the International Criminal Court (ICC), which Myanmar is not party to. Myanmar has denied most accusations or demanded evidence, while blocking independent access to northern Rakhine.

Delegates from the UN Security Council, which has the power to refer Myanmar to the ICC, visited Myanmar and Bangladesh in May and recommended that Myanmar establish an independent probe into allegations of atrocities.

The commission of enquiry’s four members were announced in July. The inclusion of the two international members alongside two Myanmar members prompted criticism from nationalist political parties and members of the military, whose joint motion to dismiss them from the commission was recently defeated in the national parliament.

During the press conference, Manalo and her international colleague Mr Kenzo Oshima, Japan’s former permanent representative to the United Nations, said they were confident of cooperation from the Myanmar government and security forces, and hoped to access “all sources of relevant and reliable information”.

They said they had received assurances from the government that members of the commission and those they interviewed would receive “protection from harassment”.

“I would not be here if I were not confident of what we could achieve,” said Manalo.

The commission, whose Myanmar members are U Mya Thein, former chair of the Constitutional Tribunal, and U Aung Tun Thet, coordinator of the government agency implementing reconstruction and relief works in Rakhine, had met State Counsellor Daw Aung San Suu Kyi and other senior officials the previous day.

While the commission’s terms of reference were reportedly discussed at the meeting, they have not been made public and members did not elaborate on their proposed plan of action at the press conference. Asked by a reporter whether the commission would visit refugee camps in Bangladesh, Oshima said it was “quite possible”.

They pledged to “observeindependence, impartiality, confidentially, integrity, and professionalism”, and that they would abide by national law, as well as international human rights law, “where applicable”.

Manalo and Oshima said they would soon establish a secretariat and website, and would consult with experts “as and when necessary”. A final report, with recommendations, would be delivered to the president within 12 months. They said they would next meet in two weeks’ time.

Manalo repeatedly framed the effort in terms of cooperation within the Association of Southeast Asian Nations (ASEAN). “We love peace, we love prosperity, we love security,” she said of the member states, which generally stand by a policy of non-interference in members’ internal affairs.

Mr Phil Robertson, deputy Asia director for Human Rights Watch, told Frontier that the one-year timeframe for the commission “will only ensure the irrelevance of its work”.

“This looks like a primitive Myanmar government ploy to buy time without realising that it’s the UN’s Fact-finding Mission that is now driving the tempo in the international community, not whatever schemes are being cooked up in Nay Pyi Taw,” he said.

The Fact-finding Mission, established by the UN Human Rights Council in March 2017 to investigate alleged abuses in Rakhine and other conflict-affected areas of Myanmar, has been denied access to Myanmar but has collected testimony in the refugee camps in Bangladesh.  It will present its conclusions on September 18.

U Aung Thaung Shwe, an Arakan National Party lawmaker for Buthidaung Township in northern Rakhine State, told Frontier, “We don’t acknowledge it [the commission].” He said his colleagues have been “objecting to it all along” and accused the government of ignoring the views of “Rakhine people, Rakhine parties, Rakhine MPs”.

Robertson said the Myanmar government “has a record of creating do-nothing commissions that absolve state forces of human rights violations, and lack independence and expertise. Moreover, little is clear about this specific commission other than its members and vague expressions of its mission.” 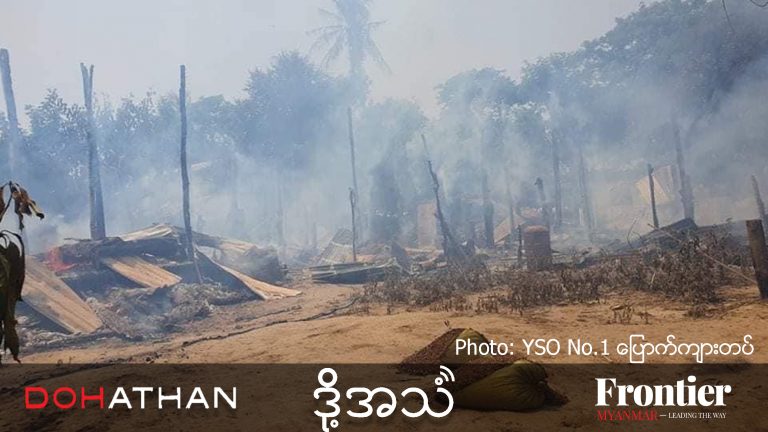