YANGON — A member of the local punk band Rebel Riot has made a public apology to the Buddhist nationalist group Ma Ba Tha after appearing in a photo while adorned in religious garb.

During a tour of Thailand, members of the band dressed in the fashion of a Christian priest, a Buddhist monk and a Hindu deity in promotional photos published to Facebook on March 20.

Myanmar National Network leader Ko Win Ko Ko Latt, a regular fixture at nationalist protests in recent years and known for his anti-Muslim activism, saw the photos in the following days and lodged a complaint with the Yangon Region office of the Ministry of Religious Affairs and Culture.

After a Facebook post condemning the band was shared widely, Win Ko Ko Latt said he was contacted by Ko Kyaw Kyaw, who wore the Buddhist robes in the photo, to say he had no intention of insulting Buddhism.

Presided over by Yangon Region Ma Ba Tha chair U Pyin Nyinda and attended by around 20 monks, Kyaw Kyaw signed a document confessing to have offended religious sentiment and made a verbal promise not to repeat the transgression. 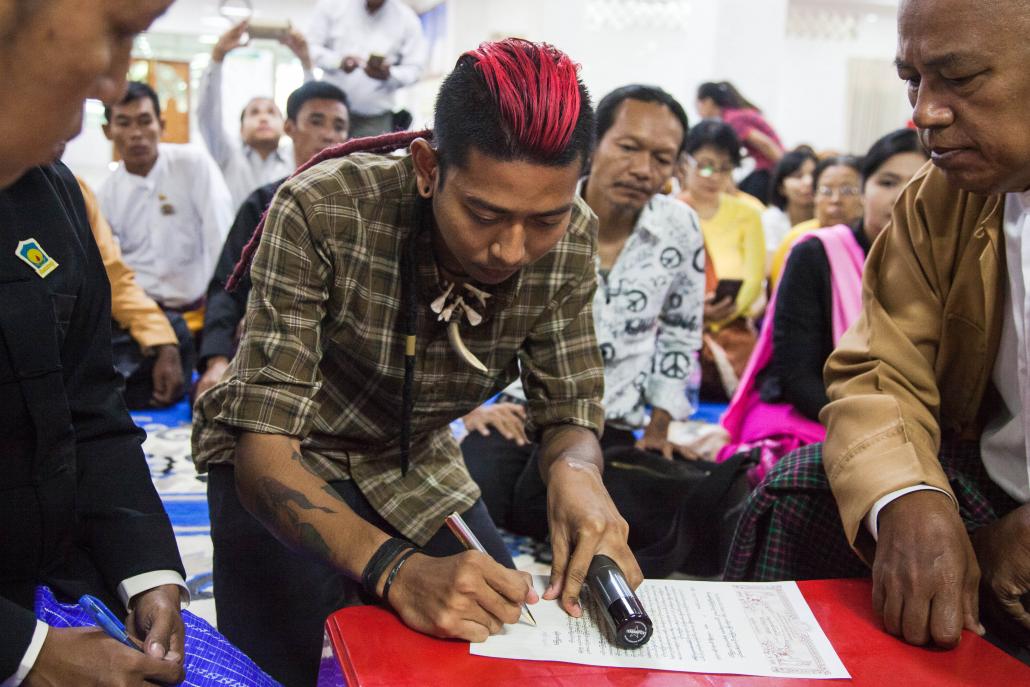 In reply, Kyaw Kyaw affirmed his own Buddhist faith while defending his conduct.

“From my understanding, the internal enemies are greed, anger and ignorance,” he said, adding that he had not worn monastic robes in the photo but cloth from a local fashion shop.

He said he did not accept he had sinned and had attended the ceremony in order to apologise upsetting religious sentiment.

The Venerable U Thaw Parka, who led the ceremony alongside Pyin Nyinda, said the proceedings did not have any relation to potential legal action brought against Kyaw Kyaw. He said, however, that the musician’s willingness to sign the confession agreement could help him avoid conviction in any potential court case arising from the photo.

Offending religion is a criminal act under Section 295 of Myanmar’s Penal Code, with a maximum custodial sentence of two years.