Many booed and shouted “No Kofi-led commission”, as his convoy left the state capital airport, holding signs reading “No to foreigners’ biased intervention in our Rakhine State’s affairs”.

“We do not like interference,” protester Ko Thein said, adding that crowds would return to mark Annan’s departure.

Mr Annan is expected to meet with Rakhine leaders and tour camps for the state’s internally-displaced Muslim population before leaving on Wednesday.

Since the government announced his chairmanship of the new commission late last month, Annan has been the focus of criticism from Rakhine nationalist groups, who say a resolution to the state’s ongoing citizenship impasse and chronic underdevelopment should be devised without international involvement. 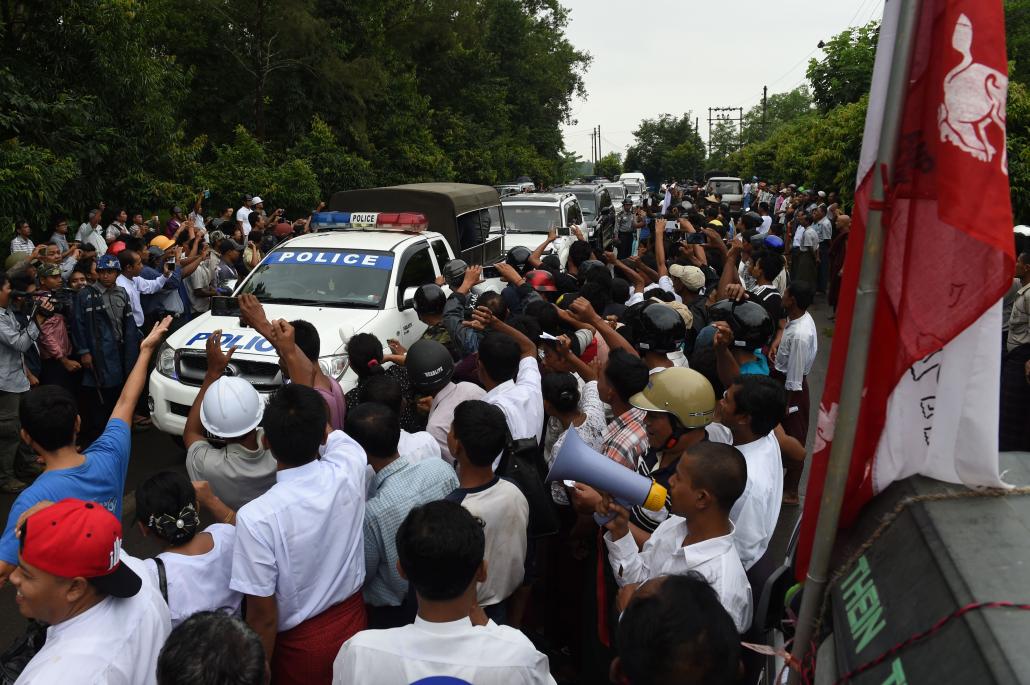 Demonstrators stand along a road while a police car escorts a vehicle carrying Kofi Annan along the airport road following his arrival in Sittwe on Tuesday. (Romeo Gacad / Frontier)

“We don’t want people who are foreign to get involved in this case, which is a matter for our own country, and is not the problem of foreign countries,” U Aung Than Wai, the Sittwe secretary of the Arakan National Party, told Frontier on Monday. “We want people who are experts from the states and regions of Myanmar.”

He added that the government should instead adopt recommendations from the Rakhine Investigation Commission, established after communal riots claimed the lives of more than 200 people in 2012, to address the state’s issues.

The ANP rebuffed a formal invitation to meet with Annan at the National Reconciliation and Peace Centre in Yangon on Monday. Dr Aye Maung, the party’s chairman, said vice-chair Daw Aye Nu Sein instead presented him with a letter outlining the party’s position on the commission.

“The ANP didn’t discuss anything but said we don’t agree with the commission and that it needs to be abolished,” he told Frontier on Tuesday.

More than 100,000 mostly Rohingya Muslim IDPs remain in squalid camps since the 2012 violence with limited access to healthcare and humanitarian relief.

Last week, sitting UN chief Ban Ki-Moon called on Myanmar to grant citizenship to the the group and respect their right to self-identify as Rohingya, a position at odds with the Rakhine community who claim the community are illegal immigrants from neighbouring Bangladesh.

Additional reporting by Kyaw Phone Kyaw in Yangon and AFP in Sittwe.