Myanmar’s 93 prisons and labour camps were holding about 92,000 people but have a capacity of about 66,000, “putting overcrowding nation-wide at over 139 percent”, says the AAPP report, released this month.

The 48-page report, Prison overcrowding and the need for urgent reform, says prisons are “a direct reflection of a country’s administrative, legislative and judicial systems”.

It says rampant overcrowding was revealed in a Myanmar National Human Rights Commission investigation of 30 prisons in 2017 that found they had a total capacity of 31,500 but were holding more than 50,000 detainees.  They included Myingyan prison in Mandalay Region, which was built for 1,000 prisoners but was holding 2,800.

The report said pre-trial detention contributed greatly to overcrowding, with conservative estimates putting the number of pre-trial detainees at more than 10 percent of the prison population.

“Pre-trial detention disproportionately affects people of disadvantaged backgrounds as they are unlikely to be able to afford bail or adequate (if any) legal representation. This makes them more likely to falsely confess or plead guilty, impeding peoples’ right to a fair trial and unnecessarily increasing the prison population,” the report says.

“Pre-trial detention is extremely costly and represents a great loss of opportunity for the use of funds on wider measures that increase public safety and security, such as increased spending on policing,” it says.

The report quotes Correctional Department deputy director U Min Htun Soe as saying that people convicted of drug offences comprise about 50 percent of the total prison population. In some prisons the rate is higher; officials say that at Myitkyina prison in Kachin State it is more than 70 percent.

Drug laws are mainly used to target users and small-time dealers “and it is rare that large-scale drug traffickers are arrested or imprisoned”, the report says.

“Reducing the amount of people imprisoned under these laws will significantly reduce the prison population and provide opportunities for prevention through better policing and opportunities for rehabilitation.”

The report also touched on the cost of feeding prisoners, to whom the government has allocated K975 each a day since January 1. Reducing the prison population to capacity had the potential to save the government more than K25 million a day or K9.25 billion a year – about 28 percent of current spending, it said.

Far-reaching reform was needed to address overcrowding in a prison system, said AAPP.

“Systemic reform, addressing issues related to broader issues of social justice, disproportionate punishments, and the lack of an adequate separation of powers in Burma will ensure sustainable and long-term solutions to prison overcrowding can be implemented, reducing the high social and financial costs of incarceration,” it said. 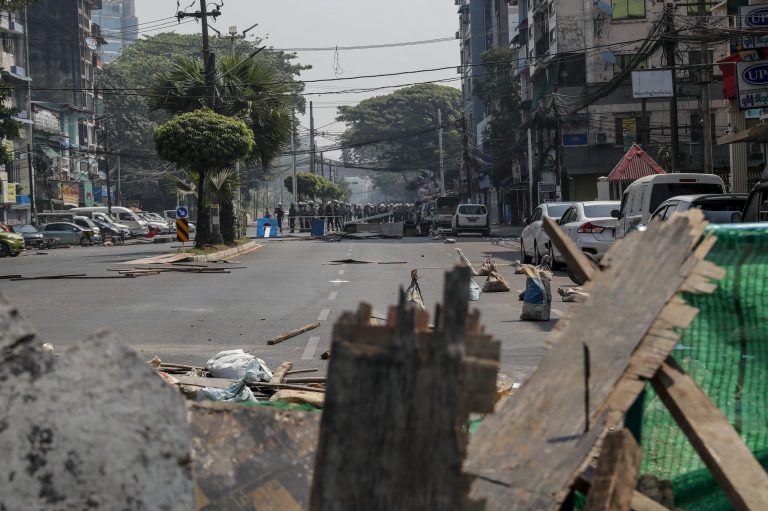 A Frontier journalist explains what it was like to cover the brutal police crackdowns on peaceful protesters over the weekend, which turned the streets of Yangon into a war zone and left at least four dead.
BY Frontier