MYITKYINA — Kachin Baptist Convention president Reverend Hkalam Samson has thanked the prayers of his supporters at home and abroad for the military’s decision to drop its complaint against him for remarks he made to United States President Donald Trump.

In a video posted to the KBC’s social media page on September 10, a day after the case was withdrawn, Hkalam Samson also urged the Kachin community’s different Christian denominations to remain united, and to keep praying in solidarity for the future of the nation.

Tensions have been high in the Kachin State capital Myitkyina in recent days, with a convoy of military vehicles containing armed soldiers rumbling past demonstrators near the Myitkyina Township Court shortly before the court was due to announce if the case against Hkalam Samson would proceed.

The complaint was filed by the Northern Command’s Lieutenant-Colonel Than Htike on August 26 over comments made by Hkalam Samson when survivors of religious persecution from throughout the world met Trump at the White House on July 17.

Samson told the US president that that there was no religious freedom in Myanmar and that oppression and torture were common.

He also described as “helpful” a decision the US announced the previous day to sanction Tatmadaw Commander-in-Chief Senior General Min Aung Hlaing and three other senior officers over what the US State Department called “gross human rights violations” during the “ethnic cleansing” against Rohingya Muslims in Rakhine State. The decision bans the four officers and members of their families from travelling to the US.

Announcing the Tatmadaw’s decision to withdraw charges against Hkalam Samson, court spokesperson U Than Htun told a news conference in the Kachin State capital on the morning of September 9 that the court had accepted and investigated the criminal complaint, but the plaintiff had applied to close the case and the reverend was “completely free of charges”. Hkalam Samson is still awaiting written confirmation of the decision.

A spokesperson for the Tatmadaw, Brigadier-General Zaw Min Tun, was quoted by Reuters as saying that it had voluntarily decided to withdraw the case “because it is what we should do”.

Hours after the Tatmadaw said it was withdrawing the case, the US embassy issued a statement saying it welcomed the decision and hoped that it “contributes positively to peace and dialogue in Myanmar”. In a statement on September 5, the US State Department had said it was “deeply concerned” by the move to bring a criminal complaint against the reverend and reaffirmed its commitment to promoting freedom of expression in Myanmar.

Maung Saungkha, founder and director of Yangon-based Athan, which campaigns for freedom of expression, said it was rare for the Tatmadaw to withdraw a criminal complaint. The KBC issued a statement later on September 9 saying that it welcomed the Tatmadaw’s decision to withdraw the charges, and hoped the Tatmadaw would respect civilians and follow rule of law in order to promote nationwide peace.

The protest near the courthouse on September 9 was the culmination of three days of demonstrations organised by Kachin displaced by fighting in the state between the Kachin Independence Army and the Tatmadaw. One of the two organisers of the demonstrations, Nhkum La Nu, worried the situation could become “intense” if the military proceeded with a case against Hkalam Samson.

When the convoy of four armoured personnel carriers and four truckloads of troops drove past lines of demonstrators outside the courthouse, the protesters continued to raise their fists and chant, “Freedom of expression, our right, our right!” 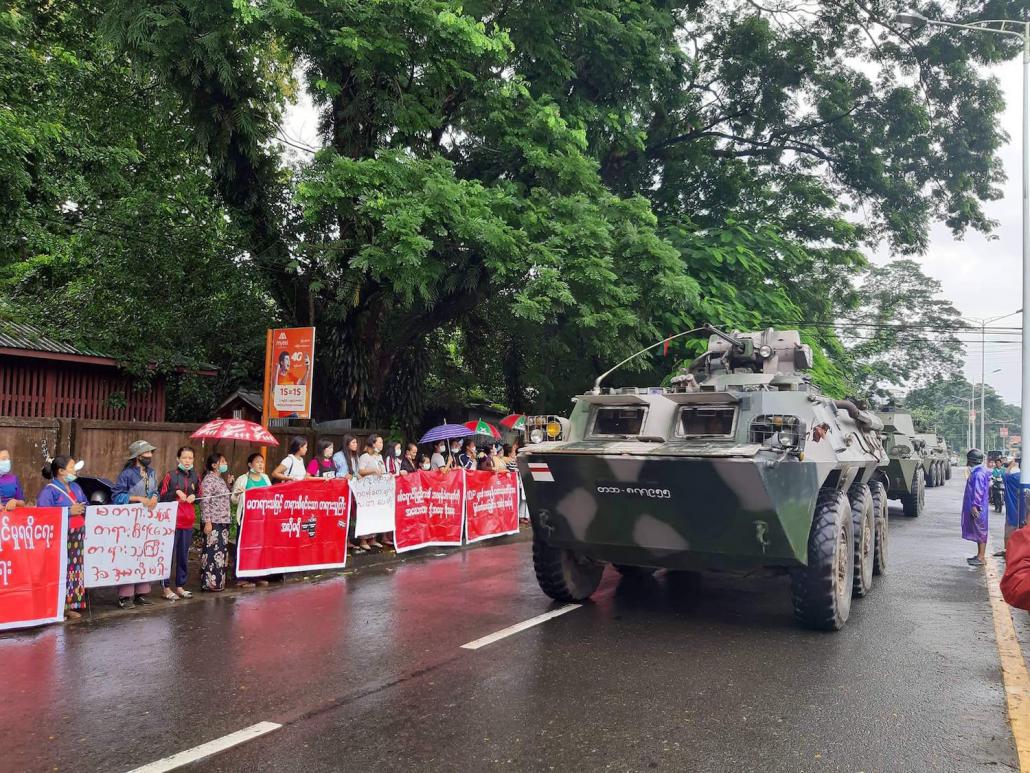 A military tank passes demonstrators behind the Myitkyina Township Court on September 9. (Supplied)

On the evening of September 8, churches in Myitkyina were overflowing with congregations praying for Hkalam Samson.

In a Facebook post the night before he was due in court, Hkalam Samson cited a Biblical verse and added, “We don’t know what will come tomorrow. God is always with us.”

Hkalam Samson was one of 27 leaders of faith and survivors of religious persecution from throughout the world who attended the White House event, at which he also asked the US government to help Myanmar’s ethnic minorities to achieve “genuine democracy and federalism”.

He told Frontier prior to the court’s announcement that he had made his comments at the White House spontaneously, abandoning his prepared talking points because “my spirit did not allow me to read … At that moment, according to the Christian belief, the Holy Spirit moved [me].”

Nonetheless, he stood by his words. He said he had been informed through a local peace mediation group that the case might be withdrawn if he apologised, but he had refused. “I do not want to trade off the truth for my own individual escape. I would like to give respect to all who are murdered, raped and tortured wrongfully during 60 years of blood-shedding oppressions,” he wrote in a September 1 post on Facebook.

Kachin activist and former political prisoner Zau Jat, who serves as general secretary of the Kachin Consultative Assembly, also known as Wa Ma Ra, said many Kachin believe that that the case brought against Hkalam Samson was part of “God’s plan”.

Speaking before the announcement, he said that the case could have significant implications for the peace process in the state.

“The reputation of Reverend Samson is quite huge … if he is charged, the public will not be silent. There will be some changes in Kachin State,” Zau Jat told Frontier. He added that the KIA and its political wing, the Kachin Independence Organization, “represent the Kachin people. They will not ignore the voice of the public.”

Hkalam Samson had also expressed concern to Frontier that if the case was pursued it could ignite renewed hostilities between the KIA and the Tatmadaw, harming recent progress towards a bilateral peace deal. Conflict between the KIA and Tatmadaw has led to the displacement of nearly 100,000 across the state since the ceasefire broke down in 2011.

He told Frontier that regardless of his case’s outcome, “I want to tell the KIO, if you trust the people, make a decision right away. The revolutionary journey, 60 years, became too long. People are very tired.”

Hkalam Samson also discussed his use of the word “torture” at the White House meeting. “Through these 60 years [of conflict in Kachin], I have had many experiences, heard many stories; the word ‘torture’ was not a mistake.”

Also speaking at the July 17 meeting with Trump was a representative of the Rohingya community from Rakhine State. More than 1 million Rohingya have fled violence and persecution in Myanmar – the majority since August 2017 – and now live in refugee camps in Bangladesh. Few public figures in Myanmar have taken a stand on behalf of the Rohingya.