YANGON — Police arrested several Buddhist nationalists Thursday for inciting violence after at least one man was left injured in a confrontation with local Muslims in Mingalar Taung Nyunt.

Police issued arrest warrants for seven people, including two monks — among dozens of hardliners who stormed into the township hunting for “illegal” Rohingya Muslims.

Officers fired warning shots to break up the scuffles in the early hours of Wednesday.

Earlier Thursday the nationalists held a press conference defending their actions and demanding the authorities investigate the case.

At least two people have been arrested out of seven who have been charged with incitement to commit violence, which carries a sentence of up to two years in prison.

”About three lay men were arrested by police this evening,” a local police officer told AFP on condition of anonymity.

“Warrants have been issued to arrest seven people altogether, including two monks, U Thu Seitta and U Pyin Nyar Wuntha,” he added.

Before news of the arrest warrants became public, Thu Seitta, Pyin Nyar Wuntha and Tin Htut Zaw were among a group of Buddhist nationalists who pledged to stop acting as vigilantes – but only if government staff agree to begin enforcing the law. 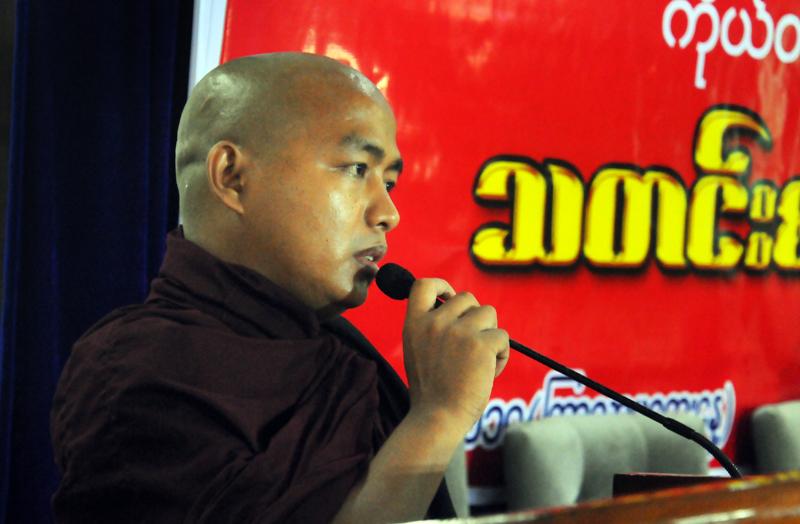 Prominent Buddhist nationalist leader U Parmaukha and several other supporters of the nationalist cause made the promise at a press conference on Thursday, called to discuss the events in Mingalar Taung Nyunt.

Parmaukkha claimed that monks and nationalist activists had been forced to undertake law enforcement because the police were “working together with the gangsters”.

From the stage at City Star Hotel in downtown Yangon, Parmaukha asked his supporters in the audience: “If the police, legal officials, judges and immigration officers promise that they will work according to the law and avoid corruption, we will promise not go to police stations and courts in the future. Won’t we?”

His supporters, mostly members of the Patriotic Myanmar Monks Union, responded twice: “We dare to promise.”

Many had been involved in the confrontation with Muslim residents in Mingalar Taung Nyunt, as well as Thaketa the previous week, when they pressured the authorities to close four Islamic schools.

PMMU secretary U Thu Seitta said the organisation received “at least” one complaint a day because the police and legal system “are not reliable”.

Regarding the raid in Mingalar Taung Nyunt, activists said at the press conference that they had received “exact” information that “Bengali” Muslims – most of whom identify as Rohingya – had been living illegally in the area. They said that the confrontation occurred because the police “did not take sufficient action”.

This has been disputed by local lawmakers, administrators and residents, who say the nationalists had been trying to provoke a riot.