In lieu of government, volunteer groups continue to meet the basic needs of communities. One such is the youth-heavy Marga Society in Hpa-an.

THE EMERGENCY call came through as Ko Thu Saw Oo, 22, was chatting with other volunteers at the Marga Society’s office in the Kayin State capital, Hpa-an. They rushed outside to the ambulance, turned on its blue flashing lights and headed to the house of a patient needing an urgent transfer to hospital.

The hospital has ambulances, but the Marga Society is well known in Hpa-an and its ambulance service is quicker. “So usually people call us directly instead of the hospital,” Thu Saw Oo told Frontier. “We are happy to assist the hospital and to help society.”

At the patient’s house, Thu Saw Oo quickly prepared a gurney while two other volunteers went inside to put the patient on a stretcher. “None of us is a doctor, but we received basic training from the government and some volunteers attended a two-week course in Thailand,” he said.

The training in Thailand is provided free by a hospital there and the Marga Society covers travel costs. When the volunteers return to Myanmar, they pass on their newly acquired knowledge to other volunteers.

Meanwhile, the ambulance has arrived at Hpa-an General Hospital. Thu Saw Oo and the other volunteers hand over the patient to the hospital’s medical staff and do some paperwork on the case before they drive back to the office. The Marga Society provides its emergency service around the clock and some volunteers will stay at the office overnight in case there’s another call. Among them is Thu Saw Oo. 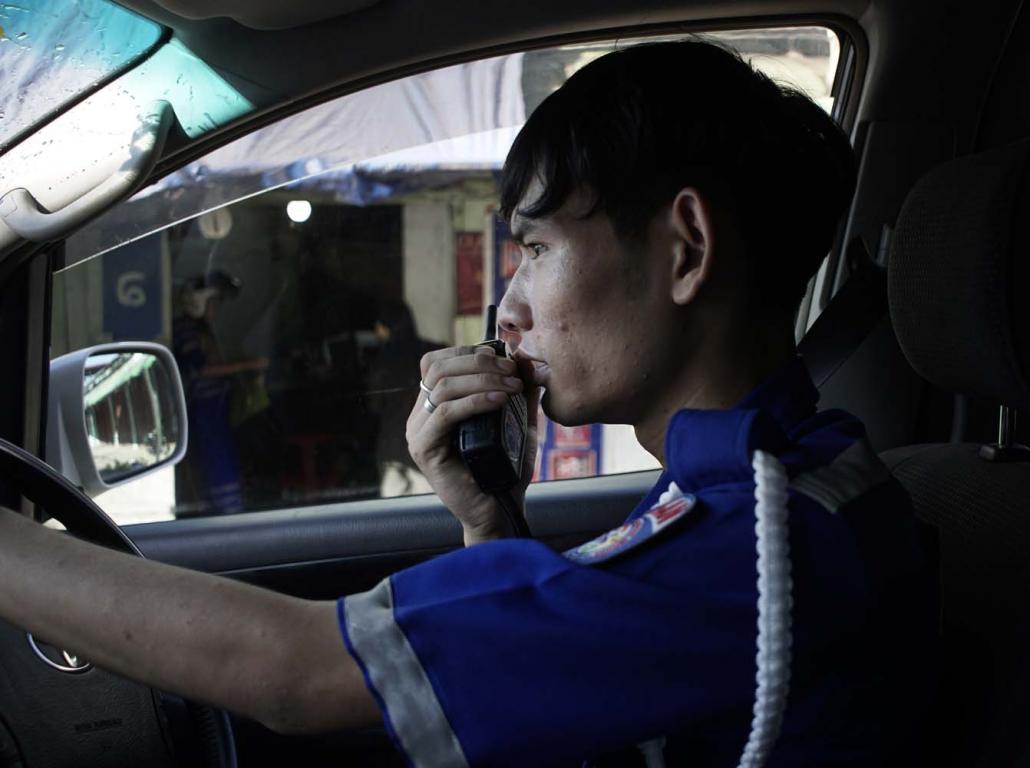 A third-year chemistry student, Thu Saw Oo has been a volunteer with the Marga Society for five years. He had not planned on joining.

“When I was a teenager, I never went out. One day, a friend said it wasn’t good for me to spend the whole day in my room and he asked me to come with him. That’s how I got to know the Marga Society,” he told Frontier.

“In the beginning, I didn’t like it and I didn’t want to be a volunteer. But the more I learned about what Marga does, the more interested I got,” he said.

“I started enjoying volunteering and then I decided I wanted to help people, and it became my new philosophy in life.”

The volunteers who run the Marga Society in Hpa-an provide four core services: ambulance and rescue, blood donations, education in the form of tuition, and funerals. In common with other volunteer groups, the Marga Society is providing a community service that would normally be the responsibility of the government.

Asked why a volunteer organisation is assuming such tasks, Marga Society chairman U Aung Than Lwin, 50, said: “Because our country is not developed. We need to help our state, our society.”

Charitable groups have a three-decade long tradition of complementing, or substituting, state services in Myanmar. After the collapse of the “Burmese Way to Socialism” under General Ne Win in 1988, they began to emerge at the local level as ostensibly religious groups and initially provided opportunities for community-minded citizens to come together informally and arrange social and religious activities with private funding. 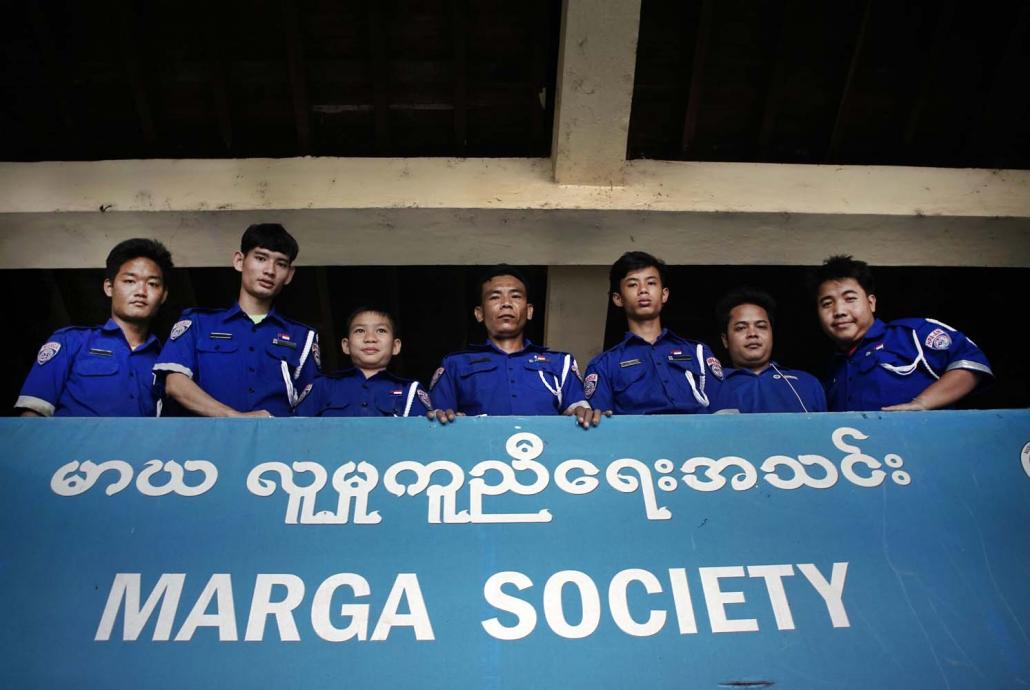 The Marga Society has 54 volunteers at its Hpa-an branch and its activities are supported by around 170 donors who each provide K10,000 to K20,000 a month. (Eva Hirschi | Frontier)

As the junta that succeeded Ne Win diverted state resources to the military and largely left poor communities to their own devices, civil society organisations increasingly filled the gap in basic service provision.

As the country has transitioned to greater democracy, civil society groups have evolved in terms of their resources, networks and practices. In recent years, Myanmar has seen increased partnerships with government and international agencies, and the legal framework for participation in some activities has been liberalised.

Aung Than Lwin says that an increase in volunteers in recent years has coincided with a welcome rise in donors. “It is recognition of our good work,” he said. The Marga Society in Hpa-an has nearly 170 donors who are regularly contributing between K10,000 and K20,000 a month.

Hpa-an General Hospital also relies on Marga to help with blood supplies. “If they only have old reserves of certain blood types but need a fresh supply, they call us because we have updated lists of all blood donors, including contact details. So we call them and go and draw the blood for the hospital,” he said.

Explaining why the group helps with funerals, Aung Than Lwin said most people don’t want to touch dead bodies. “Some people even believe it will bring bad luck; that is why we do it.” 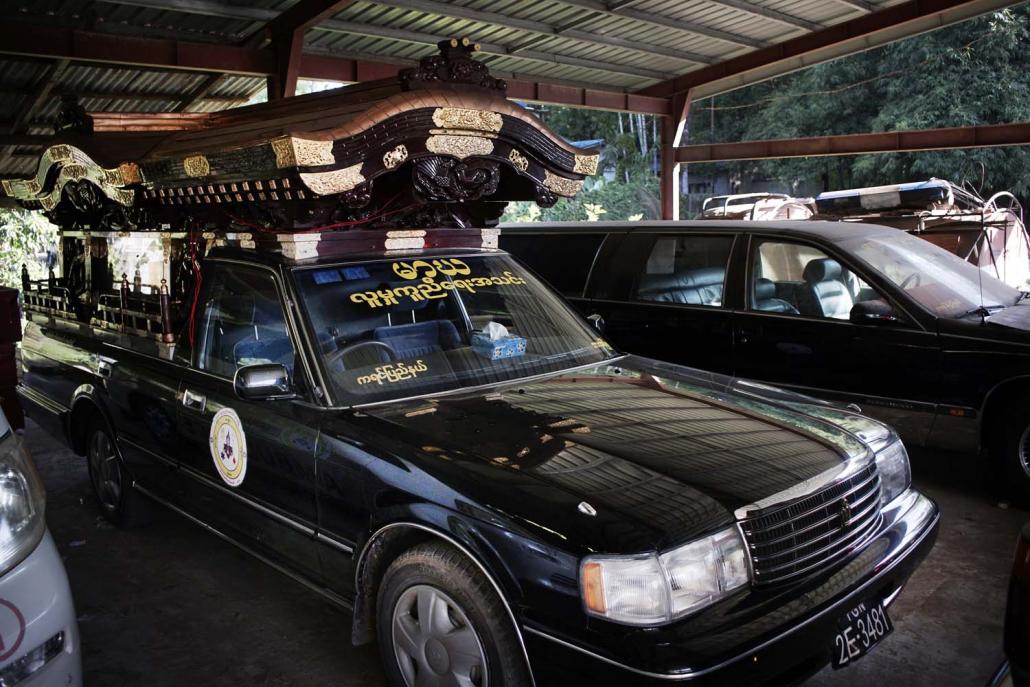 The Marga Society presents itself as neutral, in terms of politics and religion. “We help everybody, no matter which religion or origin,” Aung Than Lwin said. He said the Hpa-an branch has 54 volunteers, most aged between 18 and 40. Some help on weekends and holidays and some give a few hours of their time every day. Finding new volunteers is not hard, he said. “At Marga, the young people are like a family. They laugh together, they cook together, they have fun.”

Aung Than Lwin is himself a volunteer: he works as a hotel manager but attends the Marga office each day. Asked about his motivation, he told Frontier that he wants to ensure that young people use their leisure time constructively. “I don’t want them to go astray and start doing drugs,” he said.

As well as serving society, the volunteers say they have also benefitted personally from their involvement.

“I became more mature. I’m not that childish anymore,” said Thu Saw Oo. “I also learned how to work in a team. Before, I was not very communicative. But now I’m even a team leader!”

Such skills are attractive to employers and Aung Than Lwin is always ready to write a reference when a Marga volunteer applies for a job. “Usually it gives them better chances because Marga is well-respected,” he said.

Some volunteers spend more time at Marga Society than at home.

“The Marga Society is not my second home – it’s my first one!” said Saw ThuRa Kywel, 26, a volunteer for six years. He is employed by a bank but volunteers most days after he finishes work at 5pm.

“Many people ask me why I do it,” he told Frontier. “I tell them because most people we help are sad people and I want to make them happy again.”