The Tatmadaw has resumed its old ways, killing civilians and destroying villages, despite the early promise of peace initiatives backed by Norway and other Western countries.

Since at least 2018, the Tatmadaw has been aggressively patrolling northern Karen (Kayin) State and eastern Bago Region, in areas long under the control of the Karen National Union – and the Karen National Liberation Army’s brigades 3 and 5 in particular. The ostensible reason for these manoeuvres has been to support road-building initiatives. But both villagers and the KNU have repeatedly protested the Tatmadaw’s encroachment and expansion in the region.

In recent weeks, locals have spontaneously mobilised to demonstrate against increased militarisation, and to demand the withdrawal of Tatmadaw troops they regard as an alien, predatory and violent occupying force. The Tatmadaw calls the road-building necessary for the area’s development, but the KNU calls it is a clear violation of Article 5 of the National Ceasefire Agreement that both sides signed in 2015, and which calls on all signatories to halt aggressive troop movements and the reinforcement of military bases. Furthermore, there are no government civilian structures in these Karen hills, with health, education and other (under-funded) services provided by the KNU and partner civil society organisations. The Tatmadaw is not bringing development to these areas, but rather displacing existing community development activities.

The failure of the Joint Monitoring Committee to deal with these tensions was a key reason behind the KNU’s withdrawal from JMC meetings at the end of 2018, when it said the body needed restructuring. In 2019 the KNU pushed for the establishment of direct, bilateral, military-to-military meetings to try to effectively implement the ceasefire. When bilateral meetings began again early last year, the situation in the KNU ceasefire area was raised but never resolved and the Tatmadaw resisted KNU pressure to restructure the JMC. Then COVID-19 put the bilateral meetings on hold. The KNU and the Tatmadaw have since begun considering a proposal for an independent conflict resolution mechanism.

The most recent Tatmadaw offensive began in late December and displaced at least 3,900  villagers, including some 700 residents of Keh Der village tract in Bago Region’s Kyaukkyi Township, who were forced from their homes on January 13.

Sources with the Free Burma Rangers, a multi-ethnic humanitarian group, said this level of aggression from the Myanmar army had been “very unusual” since it signed a bilateral ceasefire with the KNU in January 2012,  “but would have been normal for cool and dry season attacks before 2012”.

The latest offensive and the forced displacement of civilians is particularly and bitterly ironic given that Keh Der – which falls within KNU-demarcated Ler Doh Township, in the armed group’s Brigade 3 area – was the centre of a Norwegian-supported pilot project to support the bilateral ceasefire. The project was launched with great fanfare by the Norwegian government the following April.

The Kyaukkyi pilot project, as it was called, was jointly designed by community representatives, KNU headquarters and district officials, and the Committee for Internally Displaced Karen People – the KNU’s humanitarian and community development body. While the project aimed to provide relief for internally displaced Karen, many of whom were keen to return to their home villages, its main objective was to test the peace process and to build confidence in the ceasefire among civilians who had suffered greatly through decades of armed conflict. Stakeholders believed that its successful implementation would prove that the emerging peace process constituted meaningful progress, rather than simply a lull in fighting.

With high-level diplomatic and financial backing from the Norwegian government, the Kyaukkyi pilot project was implemented by the Myanmar Peace Support Initiative, led by the authors of this article. The MPSI had been established in March 2012 following a request from the Myanmar government for Norway to lead international assistance to the peace process, which President U Thein Sein had launched late the previous year.

One of the most symbolically important episodes in the MPSI experience for us was when government and Tatmadaw officials from Nay Pyi Daw and Kyaukkyi accompanied us to the “front line” at Mu The, a four or five hour, bumpy motorbike ride up into the hills to the east. At Mu The we were handed over to KNU troops who led us on a trek through minefields into KNU-controlled areas, where we spent two days talking to villagers and local KNU officials about their experiences and their hopes for the ceasefire.

At a meeting arranged by MPSI at Kyaukkyi on September 5, 2012, Keh Der villagers told the Bago Region security and border affairs minister  that they felt intimidated by Tatmadaw troops questioning them when they had to travel through territory under its control. The minister was initially defensive but, after listening to the displaced villagers, ordered the Tatmadaw colonel at the meeting to ensure the questioning was reduced.

At a previous meeting in July, a brave Karen IDP village leader asked a minister in the Bago Region government, “Can you guarantee that you will not burn down our villages again in the future?”

The minister promised that the Tatmadaw would not burn Karen villages again, while also acknowledging that his promise was difficult for them to believe. He said his presence at the meeting was a symbol of the military-backed government’s willingness to make peace and that with time they would all build trust in each other.

Such positive encounters continued separately from the MPSI project, as demonstrated by the joint celebration of the Karen New Year at Kyaukkyi on January 12, 2013. This unprecedented event was attended by high-level representatives of the Union government, the KNU and the community, and would have been unthinkable the year prior. Many IDPs travelled from the pilot project site at Keh Der to Kyaukkyi for the first time since 1975. Emotional scenes unfolded as families re-united. Participants said that, though they were frightened of the Tatmadaw, the interactions they had with soldiers as a result of the pilot project gave them the confidence they needed to attend an event in a government-controlled area.

Eight years later, the Karen have celebrated their New Year again, and the longer-term results of this test of the peace process seem increasingly conclusive: the Tatmadaw has no interest in keeping the peace, let alone addressing the root causes of conflict. Rather, the Tatmadaw seems intent on continuing its brutalisation of local communities, pushing unwanted roads into ethnic areas that make it easier for it to consolidate its positions and re-supply its frontline troops.

The perception in the Karen hills – at least in areas under KNLA Brigades 3 and 5 – is that the Tatmadaw is not interested in respecting ceasefires and has no qualms about violating the NCA. Trust has all but disappeared, with most residents assuming the ceasefire has failed. After years of patience, the KNLA has begun to push back and launch attacks on the intruders.

The Norwegian government played a key role in supporting the early stages of the peace process, and in encouraging the KNU and other ethnic armed groups to take the Thein Sein government’s peace overtures seriously. Following a change in government in Oslo, in September 2013, and once it became clear that the National League for Democracy would win the 2015 general election, Norway did not seem to be as committed to supporting the peace process with the appetite for risk that the process demanded. Instead, Norwegian foreign ministry officials seemed to prioritise business and economic growth as the drivers of a sustainable peace.

It is yet to be seen whether international supporters of the peace process will respond to the Tatmadaw’s violations of the NCA. In the meantime, thousands of Karen civilians have marked a cold and fearful New Year.

Charles Petrie and Ashely South served as senior advisers to the Myanmar Peace Support Initiative from 2012 to 2014. Mr Petrie also served as Resident UN Coordinator in Myanmar from 2003 until the end of 2007, shortly after the Saffron Revolution. 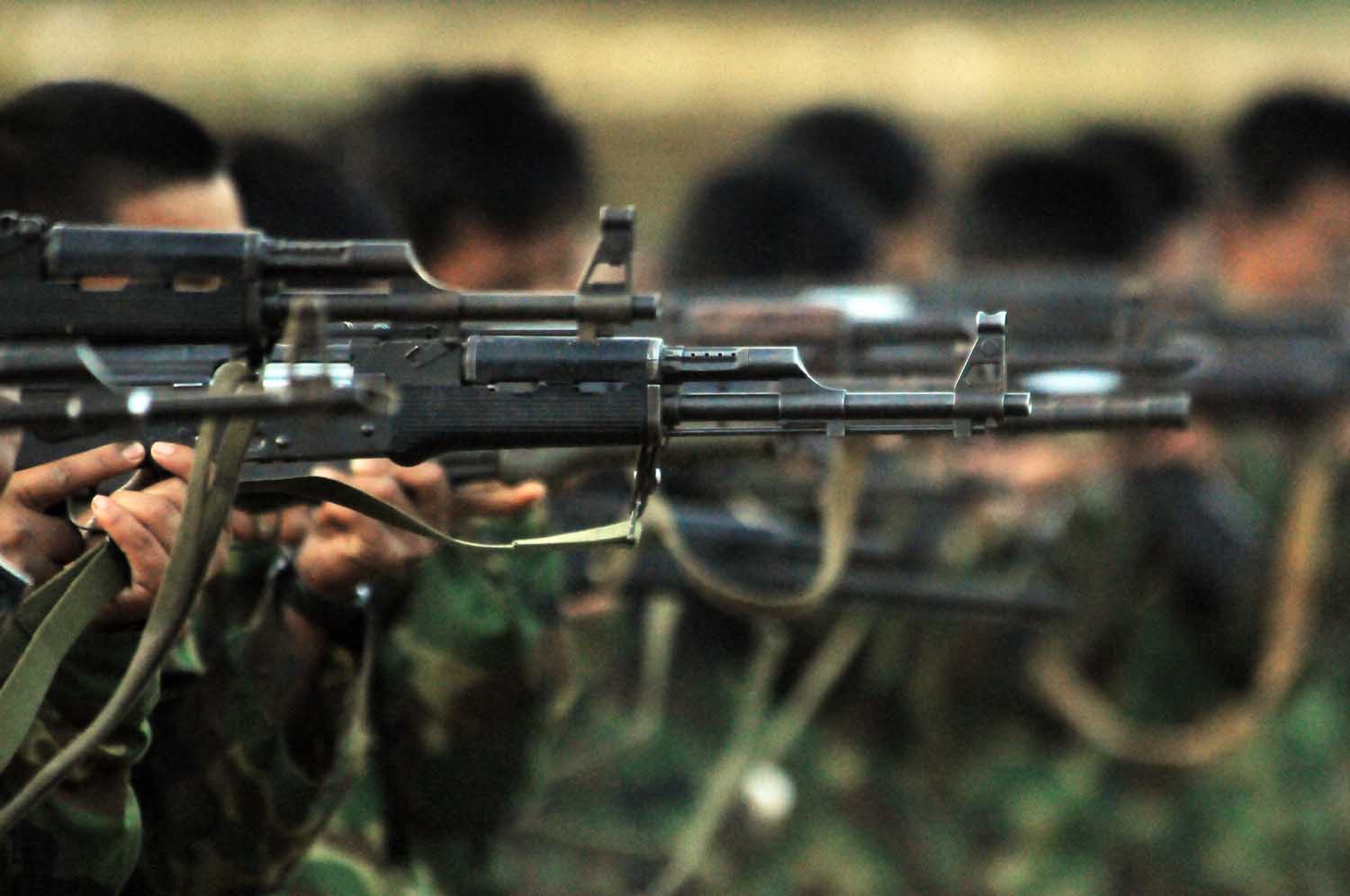