Panglong, then and now, and the promise of peace

State Counsellor Daw Aung San Suu Kyi made a poignant journey to Panglong last month to advance the cause of peace and national reconciliation, in the spirit of an agreement signed there by her father 70 years earlier.

THE SOUND of a helicopter sent a frisson of excitement through the crowd of several thousand people who had gathered at Panglong, a small town nestled in a valley in Shan State, about 500 kilometres north of Yangon.

Although the cold season has said goodbye in the plains, it was brisk in the Shan hills that bright February morning and many in the crowd wore thick overcoats as they waited patiently for the helicopter.

It was bringing the daughter of the man who had played a central role in the events they were about to commemorate.

On February 12, 1947 at Panglong, General Aung San, in his capacity as leader of the pre-independence interim government, and Shan, Kachin and Chin leaders signed an agreement on a formula for federalism. The agreement, which accepted the principle of “full autonomy in internal administration for Frontier Areas”, is celebrated each year as Union Day. But the agreement was never fulfilled.

State Counsellor Daw Aung San Suu Kyi was guest of honour at the Union Day ceremony in the town to celebrate the 70th anniversary of the signing of the Panglong Agreement.

Other honoured guests included family members of the late ethnic leaders who signed the agreement. For some, it was the first time they had been able to attend a Union Day ceremony at Panglong.

“We all gather here today in recognition of the Union. In fact, Panglong is not only part of Shan State but also so important to the whole Union. The foundation for the unity of the Union was laid here,” Aung San Suu Kyi told the crowd. 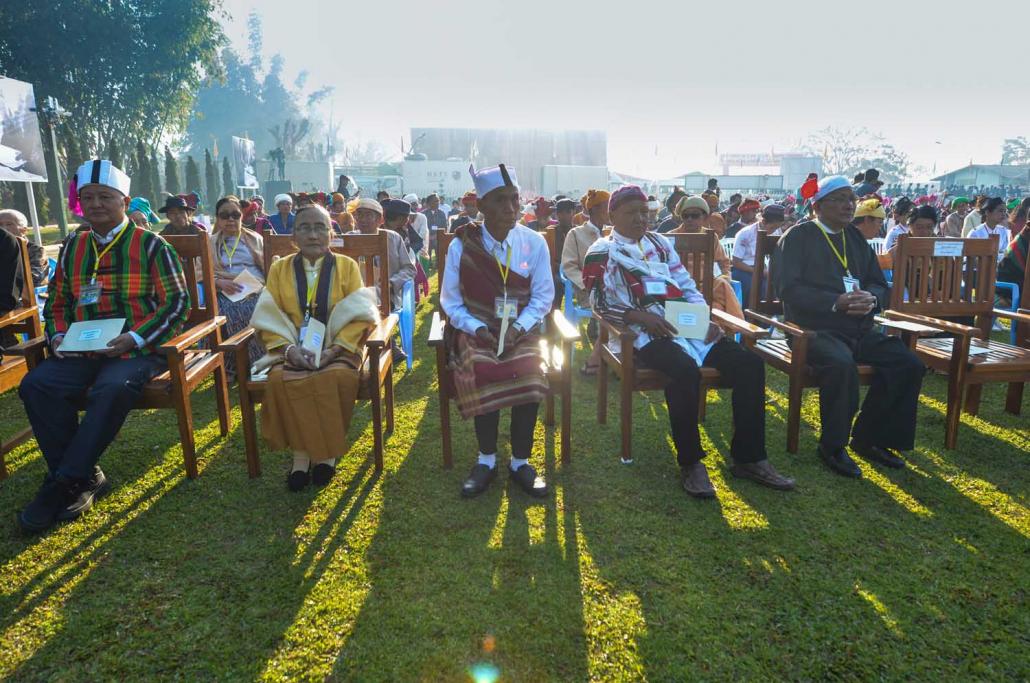 During a 32-minute speech, which focused on unity, reconciliation and trust, she also called on all national ethnic groups that were yet to sign the Nationwide Ceasefire Agreement to do so with “bravery and self-confidence.” “Join us in our 21st Century Panglong agreement,” she said.

“The first Panglong Agreement turned a page in history for our Union, so the people still remember it, until now. We deeply request you to open a new history book, and not be satisfied with just turning a page.”

After her speech, the state counsellor held a discussion about peace with 12 young people from different ethnic nationalities.

The relatives of late ethnic leaders, the peace discussion participants and leaders of armed ethnic groups all told Frontier of their fervent hope that the peace process under the leadership of Aung San Suu Kyi would be successful.

They spoke of the importance of striving to realise the vision of the leaders who signed the Panglong Agreement 70 years earlier and of Aung San Suu Kyi’s call to all groups to end conflict through dialogue and negotiation as participants in the 21st Century Panglong Union Peace Conference.

However, some raised doubts about the practicality of some of the opinions she expressed about the peace process in her speech and in the subsequent discussion.

The Panglong Agreement showed that goals can be reached by collaboration, and that solutions can be found through discussion and negotiation, the State Counsellor said at the meeting.

“To find answers by discussing and negotiating is the main promise of the Panglong Agreement,” she said.

One participant in the talk, Sai Aung Myint Oo, said that although the Union had originated from the Panglong Agreement, the failure to implement it had generated a lack of trust. The “Panglong promises” were included in the 1947 constitution, he added, referring to its Chapter X, which gave every state the right to secede from the Union under certain conditions. 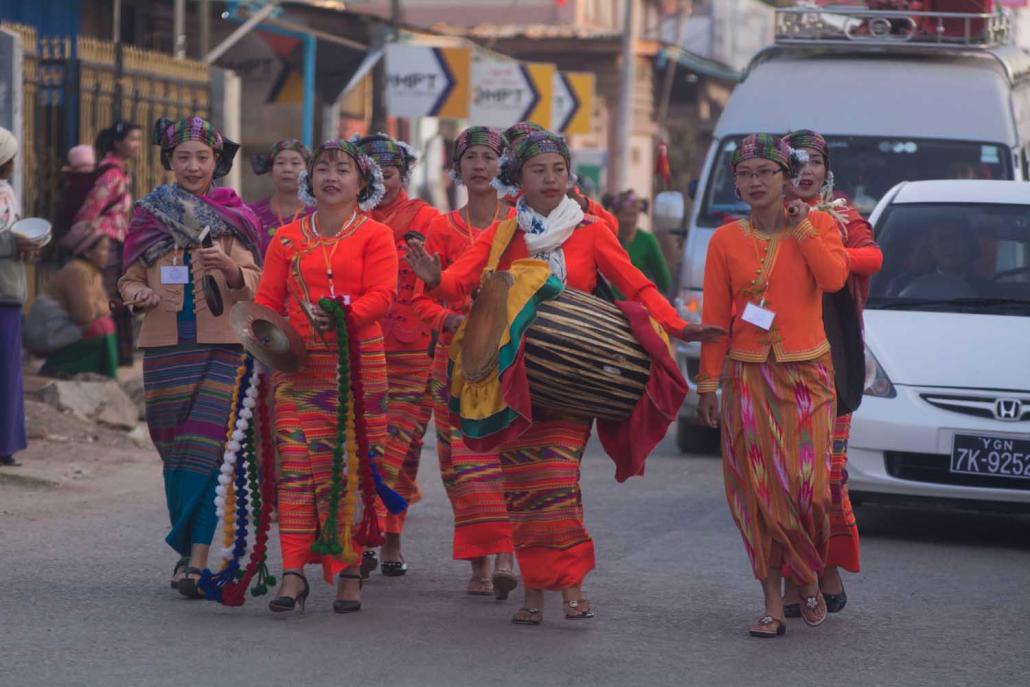 The second 21st Century Panglong Union Peace Conference has been beset by delays, but is expected to take place in Nay Pyi Taw this month. (Teza Hlaing | Frontier)

For ethnic nationalities, the roots of the problem were a lack of equal rights as well as self-determination and self-government, Aung Myint Oo said.

Speaking to Frontier by telephone after the Panglong event, U Gam Awng, a spokesperson for the Kachin National Consultative Assembly, said he rejected Aung San Suu Kyi’s comments about the “Panglong promises” because the right to secession was not a topic for discussion in the peace process.

Referring to the exclusion of the Kachin Independence Army and other groups from the peace process until they sign the Nationwide Ceasefire Agreement, Gum Awng said the process needed to be inclusive to end conflict.

“What we are saying is make this [peace process] all-inclusive to help end conflict,” he said, while also calling for equal rights and self-determination.

The 21st Century Panglong Union Peace Conference was discussed at a meeting hosted by the KNCA in the Kachin State capital, Myitkyina, from February 16 to 18.

The meeting accepted the peace process under the National League for Democracy government but called for a halt to offensives by the military, including in Kachin State where a ceasefire between the Tatmadaw and the Kachin Independence Army collapsed in 2011. Attendees at the meeting also urged the government to ensure that the peace process is all-inclusive. 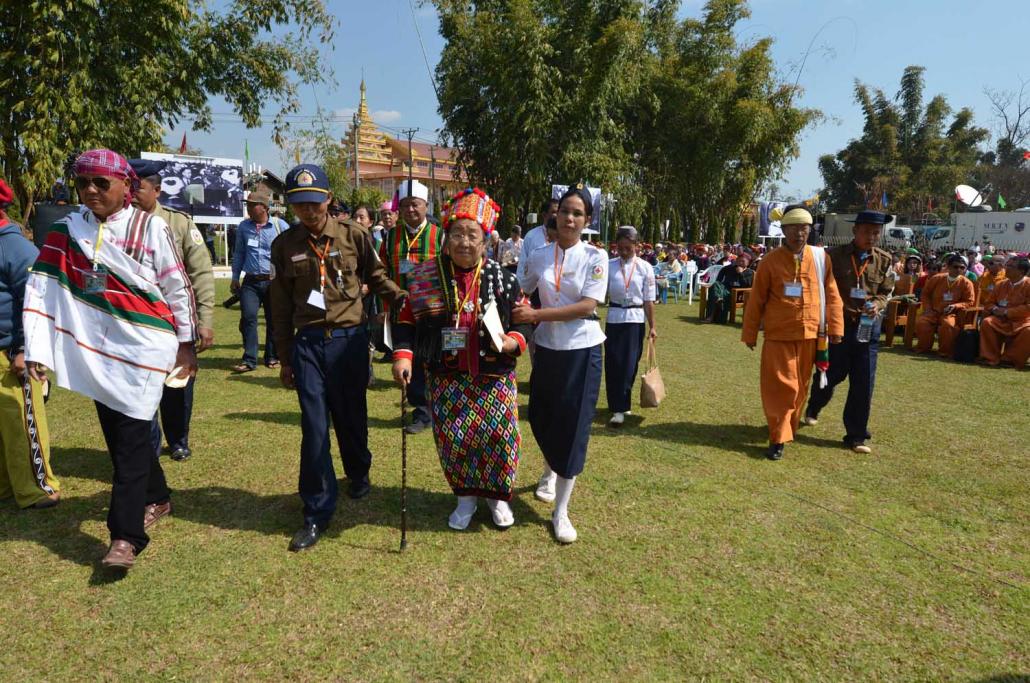 U Min Zin, executive director of the Institute for Strategy and Policy-Myanmar, a Yangon think-tank, said he regarded Aung San Suu Kyi’s interpretation of the “Panglong promises” as essentially correct and that they did not include the right to secession raised by ethnic nationalities.

There was concern among ethnic nationalities that the 21st Century Panglong peace process might disregard the promises of the 1947 Panglong Agreement, and whether their doubts had been strengthened by the State Counsellor’s comments was food for thought, Min Zin told Frontier.

“It is difficult to put trust in others without self-confidence,” she said. “First, encourage yourselves to be able to trust others. Nourish it to grow. Approach it with the belief that we are able to do it for the later generations.”

Her call came amid preparations for a second 21st Century Panglong Union Peace Conference – which was due to begin on February 28 but has since been postponed, most likely until March – and efforts to persuade non-signatory groups to sign the NCA.

It has been the policy since the peace process was launched under the U Thein Sein administration that all groups could participate after they signed the NCA.

In her peace talk at Panglong, Aung San Suu Kyi urged the remaining groups to sign the NCA. “We open the door for you to take part in the peace process,” she said. “Make a start and make yourself responsible. Don’t try to put the blame on others, otherwise the peace process will be prolonged,” she warned.

However, those plans took a significant setback on February 24 when the leaders of seven ethnic armed groups said they will not sign the NCA in its current form, but will instead form a committee to discuss a new approach to the peace process.

The statement called for a new ceasefire agreement to be signed, for a truly Federal Union to be formed based on bilateral agreements made with the previous government, an end to Tatmadaw offensives in ethnic minority areas and for an all-inclusive political dialogue to start as soon as possible.

The statement also demanded that the member groups of the Northern Alliance, which launched attacks on Tatmadaw outposts in the north of the country in November, not be classified as terrorist groups. Such a proposal was rejected in the Union parliament, but passed in the Shan State Hluttaw in early December. 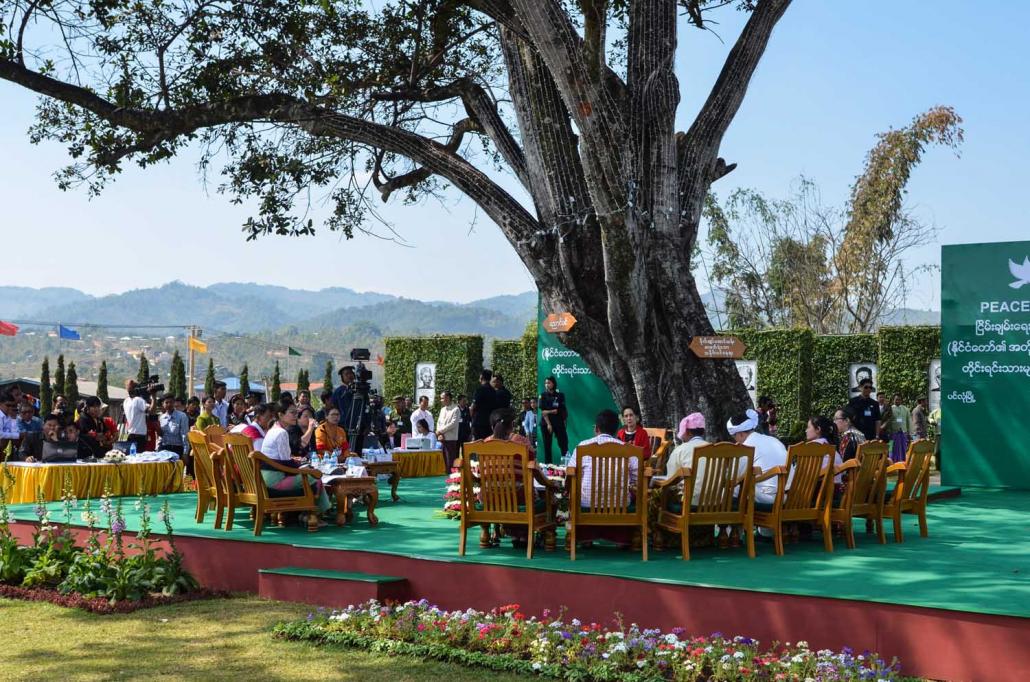 The government has not officially responded to the proposal from the Wa meetings. During the interval of a civil society meeting in Nay Pyi Taw on February 24, U Thein Zaw, deputy chairman of the Peace Commission, said negotiations with the Wa group were ongoing.

Khu Oo Reh, secretary of the United Nationalities Federal Council, which represents non-signatories of the NCA, said armed groups should not be pressured to sign the ceasefire.

“Although we accept that trust cannot be achieved by putting blame on each other, without fulfilling the needs of ethnic minorities they should not be pressured to sign the NCA,” said Khu Oo Reh, who is also deputy chairman of the Karenni National Progress Party.

“It is not that we don’t accept what the state counsellor said; but we need to start a dialogue to find a harmonious solution to the situation,” he said.

The overwhelming view among ethnic nationalities is that the Tatmadaw needs to halt attacks on ethnic armed groups for the peace process to be able to succeed.

At the peace talk with young people at Panglong, Aung San Suu Kyi was asked by an ethnic Kayin, Ma Phwe Yu Mon: “Isn’t it possible for the Tatmadaw to stop its offensives against ethnic groups with self confidence?”

The State Counsellor declined to answer the question directly, but said: “If you want all parties, including the Tatmadaw, to stop armed conflict, the people’s voice as the voice for peace must be clearer and louder.”

Frontier sought a response from the Tatmadaw to Phwe Yu Mon’s question but the mobile phones of its newly-appointed spokespersons, General Soe Naing and General Aung Ye Win, were switched off.

Nyunt Lwin, Khu Oo Reh and Min Zin all acknowledged that it would be difficult for Aung San Suu Kyi to convince the Tatmadaw to stop fighting.

Min Zin said the State Counsellor held an important role and must be able to persuade both the Tatmadaw and non-signatory ethnic armed groups to stop fighting.

Aung San Suu Kyi is on record as having said that taking risks is essential to break free from the vicious circle of fear-hatred-conflict-fear.

Despite the challenge of ensuring that the peace process becomes inclusive, Min Zin was confident it would eventually bear fruit.

“Although an outcome acceptable to all might not be achieved, I believe we are on the road that will lead to a solution of all problems,” he said of the peace process.

A successful peace process could be one of the greatest legacies of an NLD government headed by Aung San Suu Kyi, Min Zin said.

“If an acceptable equilibrium could be reached, it could be a great achievement for the Union during the term of her administration,” he said.