The steady rise in arrivals since 2011 has highlighted the travel sector’s huge potential for growth but managing that expansion poses some challenges for the Ministry of Hotels and Tourism.

THE TOURISM industry in Myanmar has grown rapidly since reforms began in 2011, with Ministry of Hotels and Tourism figures showing that the total number of foreign arrivals has soared from 1.6 million in 2012 to 4.68 million last year.

The forecast for this year is 5.5 million arrivals, but ministry figures show that Myanmar had received only 2.7 million visitors – including 800,000 by air or ship – to the end of August.

Behind the numbers, the picture is more mixed. Because the ministry includes those crossing the border on day passes, barely a quarter of visitors are tourists. Last year growth in tourist arrivals was negligible. Many entrepreneurs have entered the sector in recent years, significantly increasing competition.

Many in the industry were delighted when a successful hotelier, U Ohn Maung, was appointed minister for hotels and tourism in the National League for Democracy government; for decades, former military generals had held the post.

His background and experience has heightened expectations for growth in the coming years, but the industry faces a number of challenges, some of which are the result of its rapid growth.

U Thet Lwin Toe, chairman the Union of Myanmar Travel Association, said the jury was still out on the government’s performance.

“It’s more relaxed because the government was elected by the people. But the industry needs short-term strategies. For example, before there weren’t enough hotels and human resources but there’s now an oversupply. We need a short-term strategy to boost demand and help to keep the workforce employed.”

The ministry has a strong record of intervention in the industry. In 2012 it set a cap of US$150 (about K189,000) a night on standard rooms in foreign-owned hotels after complaints about profiteering amid an influx of business travellers after reforms began.

Now the equation has changed – tourist growth is stagnant, while many new hotels have opened over the past four years. But the interventionist tendencies of the ministry have continued. A few weeks ago it instructed state and regional governments to restrict permits for new hotels because of concerns about oversupply.

New hotels at Yangon, Mandalay and other top destinations such as Inle Lake, Kalaw and Taunggyi in Shan State were unnecessary because of low occupancy rates, Ohn Maung told a news conference in the commercial capital on September 20.

But he denied reports – including in state media – that the ministry had introduced a blanket ban on new hotels in these areas. He said that those wanting to operate a hotel would need a recommendation from the relevant regional government. The minister added that he was concerned about investors in hotel projects suffering financial losses.

Director U Ohn Myint said at the event that the ministry wanted to balance supply and demand.

“When the amount of tourists is higher, we will allow the building of new hotels,” he said.

Figures presented at the news conference put occupancy rates at about or below 50 percent in a range of destinations, including Yangon, Mandalay, Inle Lake, Kalaw and Taunggyi.

While supply is outstripping demand – at least during this low season – room rates still remain much higher than in neighbouring countries with more developed tourism industries. Room rates in Thailand are up to $100 a night cheaper than hotels in Myanmar with the same star ranking. Average daily rates in Myanmar increased by 350 percent between 2007 and 2012, real estate services firm Jones Lang LaSalle said in February 2013.

Asked if there was a plan to bring room rates down, ministry director U Myint Htwe said they were a consequence of supply and demand and not ministerial policy.

Thet Lwin Toe said there were a number of factors keeping prices up. “I think the land price was very high when investors built the hotels and they need to make profit based on their investment,” he said.

He added that improving service standards was more important than decreasing prices.

The Tourism Master Plan, which was unveiled by the ministry in 2012 and covers the period 2013-20, includes a three-pronged strategy that focuses on expanding community-based tourism, building human capacity in the industry, and developing popular destinations while also promoting less visited areas.

A community-based tourism development plan unveiled by the ministry in May referred to six main pilot projects throughout the country: Indawgyi Lake in Kachin State, Loikaw Township in Kayah State, Thandaunggyi Township in northern Kayin State, the Pa-O Self-administered Zone in southern Shan State, Myaing Township in Magway Region, and Mingun and Kyauk Myaung near Mandalay.

These projects have moved forward with assistance from international organisations, albeit at various speeds and with differing levels of success. The challenge will be to continue them once the foreign funding stops.

Management and maintenance can also be a problem at established destinations. The Tourism Master Plan calls for the creation of destination management organisations, but so far only one has been formed, at Inle Lake.

The temple-studded plain at Bagan, one of the nation’s top destinations, is grappling with a range of management problems, ranging from littering to transport.

Another problem is licensing. More than 40 hotels at Bagan were given permission to build construction permits but now can’t get a licence from the tourism ministry because they are considered too close to historic sites. Such issues will only worsen without a coordinated approach to site management.

Some eco-tourism destinations, such as caves and waterfalls, have also been affected by religious buildings and images. An example is the Htam Sam cave in the Pa-O Self-administered Zone, where the installation of countless religious images has concealed the grotto’s natural beauty.

Ma Kay Khine Wint, founder of the Royal Caravan Tour company, said views of the stunning Kyone Htaw waterfall, about a two-hour drive from the Kayin State capital, Hpa-an, are being obstructed by pagodas and other structures.

The government has so far taken no action to protect the natural beauty of popular destinations in what is an extremely sensitive issue.

“We will do more awareness but it mainly depends on the local community’s mindset,” said Myint Htwe, the ministry director. “But I think the current regional government will take more care about it because they have tourism industry knowledge.”

Over the past five years Myanmar’s tourism has benefited from the country’s political changes. Prior to Daw Aung San Suu Kyi’s release in November 2010 the NLD and activists had advocated a boycott of the country, which kept the number of Western visitors to a minimum.

Tourism industry sources say that to continue the growth, Myanmar needs to launch an international campaign to promote itself as a destination, as many neighbouring countries have done.

Ministry officials have previously told Frontier that they don’t have any immediate plans to promote Myanmar abroad, but would request parliament to allocate funding in the next budget. 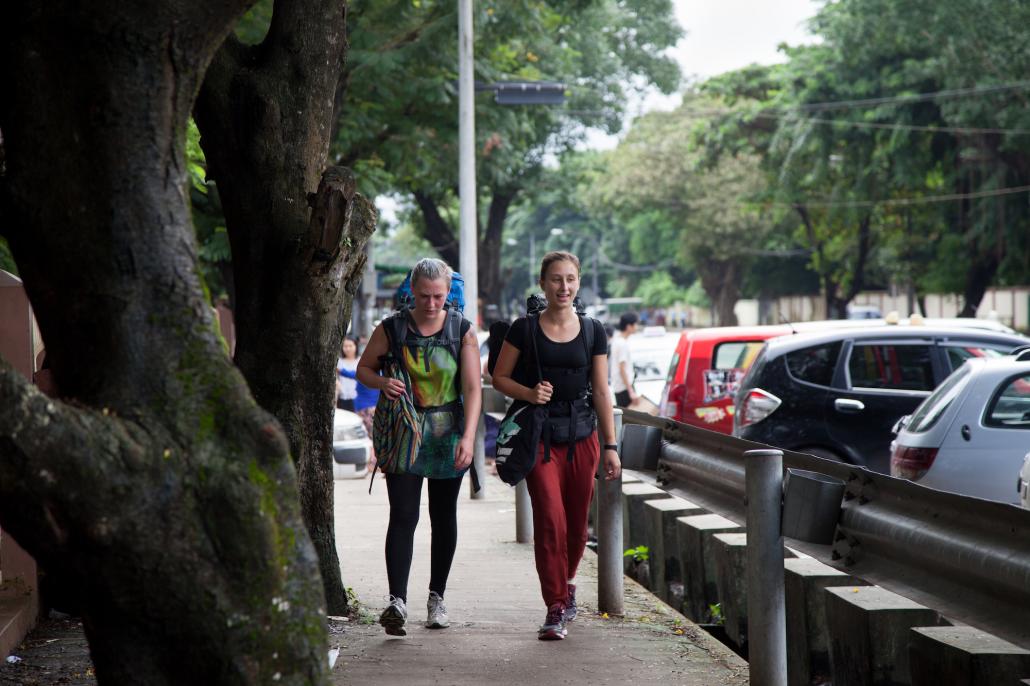 For now, nearly all visitors come for the rich history and culture. To attract new types of tourists and entice more to return, new tourism products and destinations need to be developed. One obvious option is tourism based around Myanmar’s natural beauty.

Many in the industry say a greater effort should be made to promote the Myeik Archipelago, an area of about 800 islands off southern Tanintharyi Region, which has huge potential for beach and adventure tourism. Poor transportation and strict rules on access have restricted tourism development in the archipelago to a few resorts and some dive-boat tours.

There are other sites of great natural beauty throughout the country that have tourist potential but attract few visitors, said Kay Khine Wint. Another issue was a lack of nightlife venues in big cities that cater for tourists, she said.

A ministry official who asked not to be named said Myanmar people needed to develop a greater awareness about tourists and what they want from their travel experience to help ensure that eco-tourism and community-based tourism, for example, were successful.

“Compared with Nepal, most Myanmar people have a language barrier and can also have difficulties relating to foreigners,” the official said. “Community-based eco-tourism in Nepal is successful because those who run it are well-educated about the needs of foreigners.”

After decades of isolation from the international community, the surge in tourism is bringing an increasing number of Myanmar into contact with foreigners and vice versa. It’s inevitable that there will be cultural misunderstandings.

Some efforts have been made to address this challenge – in 2012, a dos and don’ts booklet aimed at tourists was published – but many in the industry say the ministry should do more to minimise the risk. Incidents of foreigners being arrested or imprisoned can generate significant negative international publicity.

The penalties for not respecting Buddhist sites, in particular, can be severe.

On October 6, a court in Mandalay sentenced a Dutch tourist to three months in prison for insulting religion after he unplugged a speaker broadcasting a Dhamma sermon at a prayer hall near the hotel where he was staying.

Mr Klaas Haytema, 30, was arrested on the night of September 23 after disconnecting the speaker because he was tired and wanted to sleep.

An angry crowd followed him back to the hotel and he was eventually taken into custody for his own protection in a case that made international headlines.

In March 2015, a Yangon court sentenced New Zealand bar manager Mr Phil Blackwood to two years in prison for insulting religion after he posted an image of the Buddha wearing headphones on the venue’s Facebook page to promote a cheap drinks event.

Blackwood was released under presidential amnesty in January after serving 13 months in Insein prison.

A Spanish tourist was deported in July after being detained at Bagan following a complaint by monks over a Buddha image tattooed on his right calf.

One area in which the ministry has made some progress on is making it easier to do business.

A one-stop service desk for tourism businesses was also opened a few months ago at the Directorate of Investment and Company Administration.

Thet Lwin Toe said the reduction in fees and red tape was positive but more collaboration was needed. “Some undesirable procedures still remain in place. For example, there are places where tourists could visit in the past but now they need permission,” he said.