On the second anniversary of the NCA, is Myanmar keeping peace on track?

Two years after it was signed to much fanfare, the lack of progress on implementing the Nationwide Ceasefire Agreement risks alienating the very people it was supposed to help.

AFTER ALMOST 1,500 days of bilateral negotiations and agreement drafting, the Nationwide Ceasefire Agreement has become the government and Tatmadaw’s reference document for the peace process. Of course, the same cannot be said for ethnic armed groups, which remain split on the accord.

Two years after the NCA was signed, the institutions it established, including the Joint Ceasefire Monitoring Committees, are well established in areas covered by the agreement. Three sessions of the Union Peace Conference – including one under Thein Sein, and two under State Counsellor Daw Aung San Suu Kyi’s government – have been convened successfully. Some political agreements were reached during the last session. But the shifting political dynamics have made it far from smooth sailing.

The NCA has been damaged by the limitations placed on signatories’ political activities and the government’s inability to reach an agreement with non-signatories. New actors and roadmaps from the Northern Alliance’s Federal Political Negotiation and Consultative Committee have complicated the NCA process. Prospects for a parallel dialogue are real.

To maintain and restore confidence in the NCA, signatories need to focus on commitments made during the negotiations and in the document itself. I see five areas that could be addressed in order to build trust.

While the NCA is well known, fewer people are aware of its appendices. One, referred to as “the meeting decisions” and signed three days before the NCA on October 12, serves as an important to-do list for the ceasefire. While this appendix has been agreed upon in-principle, many of the areas that it covers need to be addressed in more detail. Of these, two stand out because of their possible impact on ordinary people. 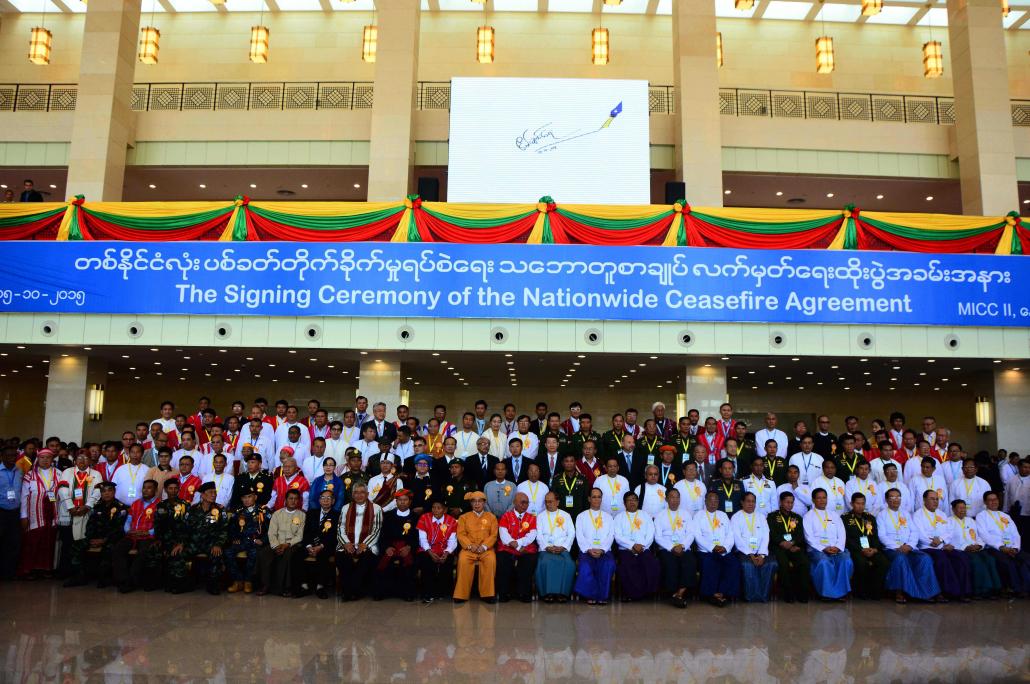 The first is defining the term “ceasefire areas”. The “meeting decision” appendix agrees to define “ceasefire areas” at a later date and review the NCA once completed. The failure to do so has complicated implementation of the NCA, particularly on demarcation of territory and enforcement of military codes of conduct. It’s unclear, for example, whether the code of conduct applies to signatories as binding parties or only within ceasefire areas. Although not so much an issue in southern Myanmar, there have been reports of code of conduct violations in northern Shan and Kachin states.

Another term that needs to be defined is “interim period”. The NCA defines a wide range of activities – from the integration of health and education to environmental conservation and fighting illicit drugs – that are to be implemented during the interim period. Two years after signing the agreement, the interim period remains undefined and little progress has been made on these tasks.

Although de-mining has been a buzz word in the peace process since 2011, it is mentioned only once in the NCA. Nine out of Myanmar’s 14 states and regions are contaminated with landmines and explosive remnants of war. A number of major international de-mining groups have opened offices in Myanmar and attempted to engage with the government, military and ethnic armed groups, with little success. The Mine Advisory Group and the Danish Refugee Council have conducted non-technical surveys in bilateral ceasefire areas, but nothing more.

The National Mine Risks Working Group was established in 2012 to coordinate between ministries and international and local NGOs. Earlier this year it released a revised strategy. The same year, the Myanmar Mine Action Center was formed at the Myanmar Peace Center in 2012 to support the work of international organisations. The following year, it oversaw the drafting National Mine Action Standards and Strategy. However, implementation needs political commitment. If you asked, “Is Myanmar ready for de-mining?” the answer could be both yes and no.

Yes: The NCA mandated the JMC to undertake de-mining. However, the JMC is still negotiating the first phase of the de-mining process. It seems clear that de-mining will be undertaken by the Tatmadaw and ethnic armed groups rather than international organisations. What is not clear is whether JMC will use the mine action standards and strategy prepared by the Myanmar Mine Action Center, which was disbanded when the MPC mandate concluded on March 31, 2016.

No: Although mine action has been talked about for more than five years and the international community has committed the funds for the de-mining process, there’s a lack of political commitment from the Tatmadaw and ethnic armed groups to stop using mines. It seems they are not yet ready to give them up.

The Framework for Political Dialogue was drafted and adopted shortly after the NCA so that the first session of the Union Peace Conference could be held in January 2016. After the National League for Democracy government took over the peace process the framework was reviewed and revised. The first Union Peace Conference under the NLD – dubbed the 21st Century Panglong – was convened without a framework, while the second session used the previous framework as well as a separate framework put forward by signatories. Ethnic armed group signatories are also coordinating with non-signatories on the framework, on the assumption that they will join the political dialogue in the near future.

The framework is still being reviewed and unlikely to be adopted before the next 21st Century Panglong Union Peace Conference. The lack of a framework gives the government the power to control the process. Its efforts to interfere in the national-level political dialogue, for example, have caused tension with the Restoration Council of Shan State.

It will be possible to continue the process without a framework by relying on the political capital of the state counsellor. However, the danger in doing so is that it undermines and diminishes the value of the NCA as a guarantee between the parties to institutionalise the peace process.

The return of refugees and IDPs is one of the key points in the NCA that directly impacts conflict-affected populations. However, the situation has not improved significantly over the past two years. As of June, there were 166 IDP camps in northern Shan and Kachin states with nearly 100,000 people, as well as 9,000 IDPs in southern Shan State. Because fighting is continuing, there is little prospect of them returning home soon.

It’s a different story at nine camps in Thailand home to nearly 100,000 refugees and probably more who are unregistered. Because the conflict in southern Myanmar has improved in recent years, Thailand and international donors have begun planning the closure of camps along the border. The UN Refugee Agency, UNHCR, facilitated the return of some refugees in 2016 but there has been no further progress this year. Although UNHCR submitted a list of prospective returnees in January, it took more than six months for government officials to visit the camps and verify them. Approval for repatriation is still pending from Nay Pyi Taw. Tired of waiting for the government, the majority of those on the list have already returned through their own arrangement.

Part of the problem is that it is still not clear who is in charge of the process: whether it be the military, through the home and border affairs ministries, or the Department of Social Welfare. In addition, the UNHCR policy of “do no harm” to the host community limits its support to the refugees. It does not, for example, provide funds for housing and advocates the government lead the process of re-integration. However, the government’s response has been limited and it is far from providing the social services that returnees need. It may take many years, even decades, for social services in Myanmar to reach the standard provided in refugee camps in Thailand.

During the NCA negotiations, two particular terms – DDR, or disarmament, demobilization and rehabilitation, and SSR, or security sector reform – caused a deadlock right until the final day of drafting. To overcome the stalemate, an agreement was made to instead discuss security-related matters during political dialogue. 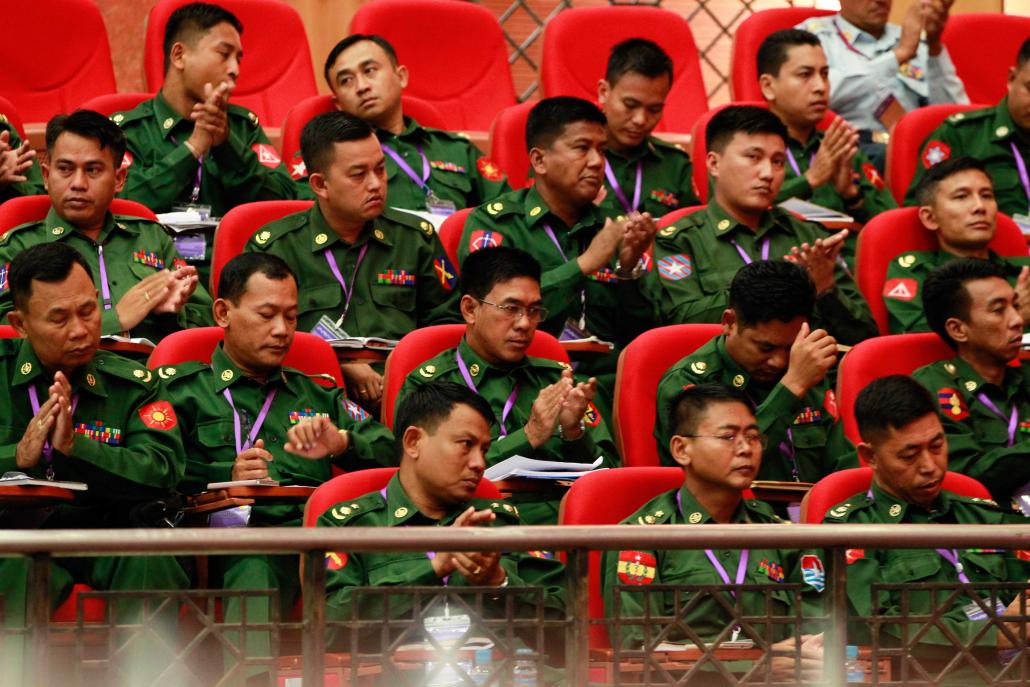 Tatmadaw representatives at the first 21st Century Panglong Conference in Nay Pyi Taw on August 31, 2016. While a framework for political dialogue was drafted in late 2015, it has been under review for more than a year. (Theint Mon Soe aka J | Frontier)

While the conceptual issues of the Standard Army and Federal Army were discussed at the first Union Peace Conference, there was no further progress on security issues at the second and third meetings. The conceptual differences between the Tatmadaw and ethnic armed groups are the major barrier to moving the discussion forward. Preparations for the upcoming Panglong conference indicate that there is unlikely to be progress on security-related matters at the meeting. The situation was further complicated by proposals from the FPNCC during the last Union Peace Conference. Without a roadmap and framework for security sector development, it’s hard to see the situation improving any time soon.

Two years on, is the NCA a success story? For the signatories, government and Tatmadaw, the answer is probably “yes”. Political space has been created for signatories and the NLD administration has benefited from the political capital of hosting the 21st Century Panglong. However, the picture is less positive if one considers that the nationwide ceasefire has resulted in little institutionalisation of the peace process.

The agreement has also brought few improvements to the lives of conflict-affected populations. If progress is not soon made in this area, the NCA is in danger of being remembered as merely an intellectual exercise on drafting political statements rather than firm agreements for peace that have a positive impact on the population.

The views and opinions expressed here do not necessarily reflect the policies or positions of the Asia Foundation or Stimson Center.