Nowhere to bury the dead

Families displaced by armed conflict in Kachin State have languished for years in camps. At death, they face a further indignity.

IN EARLY August, Chan Myae Oo’s young daughter and one of his nephews drowned in a pool of water that had built up near their camp in Kachin State.

Chan Myae Oo and his family fled to the Ngwe Pyaw Sanpya camp for internally displaced people in 2016, after fighting broke out between the Tatmadaw and the Kachin Independence Army in the state’s northern Sumprabum Township.

Today Ngwe Pyay Sanpya, located about 15 miles from the state capital Myitkyina, houses about 2,000 people displaced by one of the longest running civil conflicts in the world, which reignited with the collapse of a 17-year ceasefire in 2011.

Aside from the grief of losing his young daughter and nephew, Chan Myae Oo immediately faced another difficulty: where to bury them.

Ngwe Pyaw Sanpya does not have a cemetery, so villagers have to pay for land to bury their loved ones. Those who cannot afford it are forced to find a secluded area in the forest. 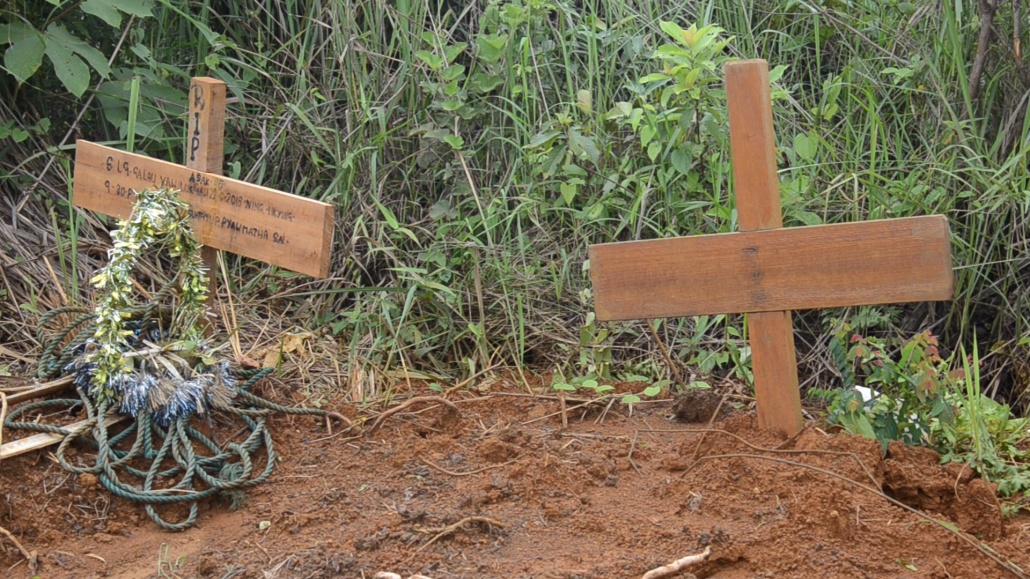 Yaw San Nu, the mother of the other child who drowned, said the families spent several hours looking for a place to bury the bodies.

“I didn’t know where to bury the dead body of my child. If I buried it in the yard, other people wouldn’t accept it,” she said.

Chan Mae Oo said the families eventually found a plot of land, for which they paid K120,000.

“The two dead bodies had to be buried side by side because the landowner only sold 1.5 metres width. There is no land to bury them in my village,” he said.

The camp was established in 2013 and the government began moving conflict-displaced people there a year later.

The pool of water where the two children drowned had formed at the side of the road near a monastery. During heavy rain, the nearby Ayeyarwady River overflows its banks, making flooding common, villagers say.

Sixteen people have died so far at the camp, but only seven have been buried in the village.

Village head Taung Sar said he had asked the government to establish a cemetery for them, but without result. One of the challenges, he said, was finding land that wasn’t being used by farmers.

“Because we kept asking, the Myitkyina Township administrator said they would designate a place for graves, but this hasn’t happened yet,” he said.

Gyaw Guan, a local government official, said they were waiting for guidance from the Kachin State government on how to solve the problem, but no action had been taken.

“I’m worried about dying because there is nowhere near the village to bury a body,” he said.