KYAR GAUNG TAUNG, Rakhine State – Residents in villages in northern Rakhine State have told reporters of accounts of human rights abuses by security forces during clearance operations conducted in the aftermath of the October 9 attack on police outposts in the beleaguered region.

The accounts, told to reporters from local and foreign media outlets who were in the region as part of a government-sponsored trip, included accusations of extrajudicial killing, arson and arbitrary arrest. The government and military have repeatedly denied that such incidents took place.

In Kyar Gaung Taung village, Maungdaw Township, Lalmuti, 23, pointed to a small pile of ashes where she said she found her father’s charred remains after security forces torched the family home in mid-November.

Her mother was later arrested and sentenced to six months in prison after authorities said her complaints about the killings were fabricated, she added.

Kyar Gaung Taung, and neighbouring Yae Khat Chaung Gwa Son, were both named in a December report published by Human Rights Watch, which used satellite imagery to show thousands of homes had been torched in mid-November during security operations. The government says residents torched their own homes.

The five-day media trip, organised by the Ministry of Information, saw reporters escorted to villages in Buthidaung and Maungdaw townships. Most of the trip was spent in Buthidaung, in areas where the government says recent attacks have been conducted by a Rohingya insurgent group known as the Arakan Rohingya Salvation Army.

On July 13, reporters were taken to Maungnama village in Buthidaung, where on July 4 a villager was kidnapped, and is believed to have been killed, by about a dozen masked men. The man’s family told Frontier they didn’t know the reason for the kidnapping but suspected he was regarded as being a government informant, which the family said was untrue.

A day later as reporters were travelling by boat to Buthidaung from Tin May village – the scene of fighting between suspected militants and BGP forces on July 9 that saw two suspects arrested and two others killed – reporters were beckoned to the shore by a group of women as they passed Maungnama. After negotiation with authorities, the reporters were allowed to visit the village to hear the residents’ testimonies. 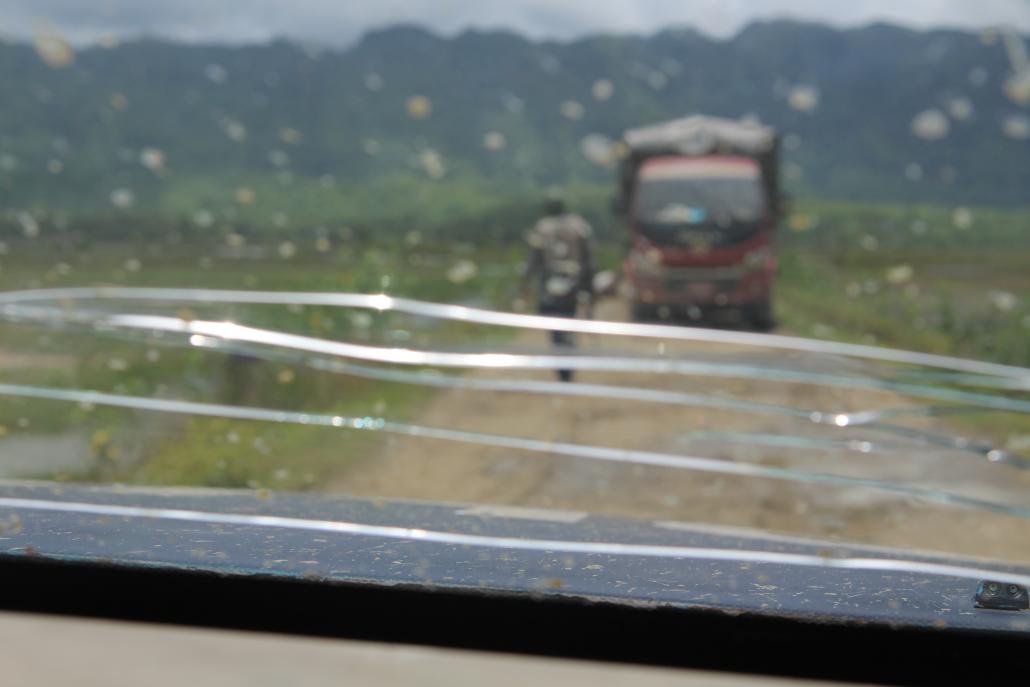 There, villagers spoke of a climate of fear due to the heavy security presence in the area. Women told accounts of their husbands running away in fear of being arrested each time security forces came to the area.

Mahmula Hatu said her son Sade Ullah had been arrested for belonging to the insurgency, despite a lack of evidence. Through severe translation challenges, she told reporters he was arrested because someone had informed authorities he had travelled to Bangladesh.

He was sentenced to six months in prison but had not been released eight months later, she said, adding that the family could not afford to provide him with a lawyer.

‘He did nothing wrong’

On June 15, the reporters were promised access to three Rohingya villages – Kyar Gaung Taung, Yae Khat Chaung Gwa Son and Dar Gyi Zar in Maungdaw Township – they had requested permission to visit, and where some of the gravest accusations of abuses by security forces are alleged to have taken place.

Due to time constraints, Kyar Gaung Taung was the only village the group was able to visit.

The media tour had has been escorted during its trip by a large security detail of officers from the Border Guard Police. During the visit to Kyar Gaung Taung, reporters insisted officers did not accompany them to speak with the villagers.

Out of sight of the security forces, accusations of arbitrary arrests and other abuses quickly emerged.

There, one villager who spoke on the condition of anonymity out of fear of reprisals, said he had witnessed security forces torching several homes during a crackdown in mid-November. He told Frontier that 32 of the village’s residents had been killed and ten arrested, including two children.

Several women also stepped forward to tell reporters that their sons and husbands had been arrested in the crackdown and still not released, despite no evidence of them having committed crimes.

“My son was working in the field when he was arrested. He did nothing wrong,” said one woman.

A day earlier, on June 14, during a press briefing, commander of the BGP Thura U San Lwin said reports of violations by security forces were false, and that villagers had set fire to their own homes in order to elicit sympathy from the international community.

He blamed the media for reporting incorrect information.

He also disputed the UN’s estimates for the number of people who had fled the region, claiming records show that only 22,000 people were missing since October.

On June 16, reporters also met with senior figures from the Rakhine State government, including chief minister U Nyi Pu, who denied that the clearance operations amounted to genocide or ethnic cleansing, as some groups have claimed.

“Some minor accidents could have happened during the operation,” he said.

A detailed commentary on the latest government-sponsored media trip to northern Rakhine State will be published by Frontier on July 24.