The National League for Democracy is alienating powerful ethnic parties over its refusal to consult on key appointments and issues.

One of the loudest promises the National League for Democracy made during the election campaign last year was for a “federal Union”. It was a promise heard often on the campaign trail far from big cities. In two speeches during a campaign tour to the Pa-O autonomous zone in Shan State last September, NLD leader Daw Aung San Suu Kyi referred to a “federal Union” no fewer than 31 times. She always emphasised the promise of a federal Union when wooing the ethnic vote, as well as the need for government to listen more to ethnic voices.

But since her party won almost 80 percent of elected seats in the Union parliament, the situation has changed.

“Even the Ne Win government didn’t appoint a man from outside our state as the Shan State governor,” Sai Nyunt Lwin, general secretary of the Shan Nationalities League for Democracy, told Frontier.

The SNLD has been a long-term ally of the NLD, since the 1990 election. In the ballot last November, the SNLD won 25 seats in the Shan regional hluttaw to the NLD’s 23.

Nyunt Lwin was offered a ministerial position in the state cabinet, but declined. He did not disclose why he knocked back the position. “We are worried that if we disclose the reason for the refusal, we might be far apart from the NLD,” he said.

Nyunt Lwin said it was inappropriate for the NLD to have appointed the chief minister without negotiation or discussion.

It is not only in Shan that the ethnic party that won the most seats in a state assembly is feeling affronted by the NLD. 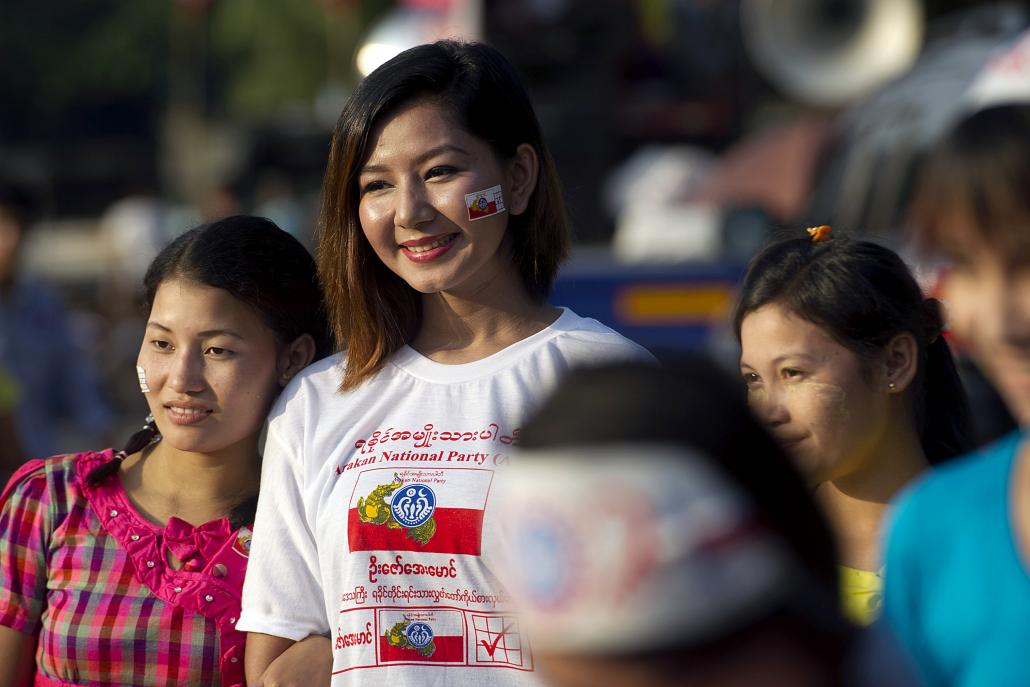 Relations between the Arakan National Party and the NLD have deteriorated sharply in the aftermath of the November election, in which the ANP won 23 seats in the state assembly to the NLD’s nine.

There was anger in the ANP in February when a party member, U Aye Thar Aung, was appointed by the NLD as Deputy Speaker of the Amyotha Hluttaw. Aye Thar Aung is a former chairman of the Arakan League for Democracy, which merged with the Rakhine Nationalities Development Party in January 2014 to form the Arakan National Party. The appointment also widened a rift within the ANP between former members of the ALD and the RNDP.

“They [the NLD] should have discussed it with our party, but they didn’t. I don’t understand why. It led to more chaos in our party,” said ANP MP, U Oo Hla Saw.

Apart from the Aye Thar Aung appointment, the ANP has also been bitterly disappointed over its inability to have a party member appointed chief minister of Rakhine, despite having more than twice as many seats in the state assembly than the NLD.

The ANP had warned in a statement that if it was not able to choose the chief minister it would assume the role of an opposition party in the assembly.

The NLD appointed as chief minister the chair of its Rakhine branch, U Nyi Pu, an ethnic Rakhine, in a decision that sparked a protest by about 500 ANP supporters in the state capital, Sittwe, on March 23.

A meeting in Nay Pyi Taw attended by Suu Kyi and ANP MPs to discuss the chief minister issue was inconclusive, said Oo Hla Saw, who attended the talks.

“They gave undertakings but nothing happened,” he said.

In an indication of the tensions over the chief minister issue, the Arakan National Party warned earlier this month that any member who accepts a ministerial position in the Nyi Pu government without informing the ANP would be fined K50 million.

It’s likely that more confrontations can be expected between the Nyi Pu government and ANP-dominated Rakhine assembly.

“If the NLD had held discussions with us, the way ahead would have been so beautiful,” said Oo Hla Saw.

There have also been grumblings of discontent in the Mon National Party over the circumstances in which Nai Thet Lwin, its vice-chairman (1), became the inaugural Union Minister for Ethnic Affairs.

Following the appointment, some analysts wondered why it was necessary for the MNP to issue a statement saying the move would have no impact on the party.

Some in the party were clearly disappointed about a lack of prior consultation from the NLD over the appointment.

“There was no discussion with the NLD over its decision to appoint Nai Thet Lwin as the minister and that made us feel very uncomfortably,” Nai Layie Tama, the MNP’s general secretary, told Frontier. “We issued the statement to show that we continue to support the NLD and because we do not want the Mon people to worry that there is a rift between the ruling party and the MNP,” he said.

The statement was an indirect way of expressing disappointment about a lack of consultation, Layie Tama said.

Mon parties had not been told when the NLD decided to appoint U Min Min Oo, its MP for Belin-2 constituency, as the state’s chief minister, he said.

The NLD’s election campaign theme was “time for change” and among the changes it has long sought are amendments to the military-drafted 2008 Constitution.

As well as amending the provisions that make Suu Kyi ineligible for the presidency and give the military an effective veto over constitutional reform, the NLD also sought changes in parliament last year to Section 261, concerning the appointment by the president of state and regional chief ministers.

The NLD said it wanted to amend the section because it was not in accord with aspirations for a federal Union. It also said the appointment of chief ministers should be made by state and regional assemblies.

“We [the NLD and SNLD] boycotted the 2010 general election because we did not accept the 2008 Constitution,” said Nyunt Lwin. “They [the NLD] tried to amend it, but failed. But now they are the government, they are still using this section to have the upper hand and it is not good.”

His concerns were echoed by Oo Hla Saw, who was critical of the NLD’s failure to consult ethnic parties on key issues. “The NLD hardly ever negotiates with ethnic parties and if this continues for the long term, the small parties will become resentful if they feel that they are being ignored,” he said. “This does not augur well for the move toward a federal Union.”

Layie Tama questioned whether the NLD was genuine when it spoke of wanting to achieve national reconciliation.

Layie Tama said ethnic parties had a feeling of being “looked down on”.

“As well as democracy we must also have equality between the Bamar and the other ethnic groups; they can’t leave us behind,” he said.

Frontier tried unsuccessfully to seek comment from NLD representatives for this report.