Painter Kay Moe Ko predicts a twisted mass of high rises and flyovers. Kyi Hlaing Aung sees ocean levels as high as Yangon’s power lines. For artist Htan Kyaw Htay, the future looks like a grid of boxes, each containing a silhouette of migrants walking with their burdens.

Yet Htan Kyaw Htay’s painting, “Life is moving”, does not represent the migrants of the future, but rather how today’s displaced peoples might be remembered in three decades.

“What we are today will be in the future some tagged photos in the memory of the world,” the artist explained.

“Life is moving” is one of around 60 works featured at the “Myanmar 2050” exhibition at Yangon’s River Gallery on Saturday, November 25. The only direction given to artists is that their work relate somehow to Myanmar’s yet-to-be.

Some are straightforward. Myint San Myint’s “Banknote of 2050” shows a simple K5,000 note, but bearing the face of Daw Aung San Suu Kyi.

Others are more subtle. “2050 Myanmar Vision” by Kyaw Nyo includes a painted public announcement loudspeaker, mounted on a pedestal instead of looming over a village.

“His message is, ‘Very soon this is going to be antique,’” says Ms Gill Pattison, who founded River Gallery in 2006. “‘It will have no function other than to embellish its surroundings.’”

Pattison says the show will not lack variety; the subject matter ranges from sentient robots to deadly viruses to the abstract representation of one’s own mind. 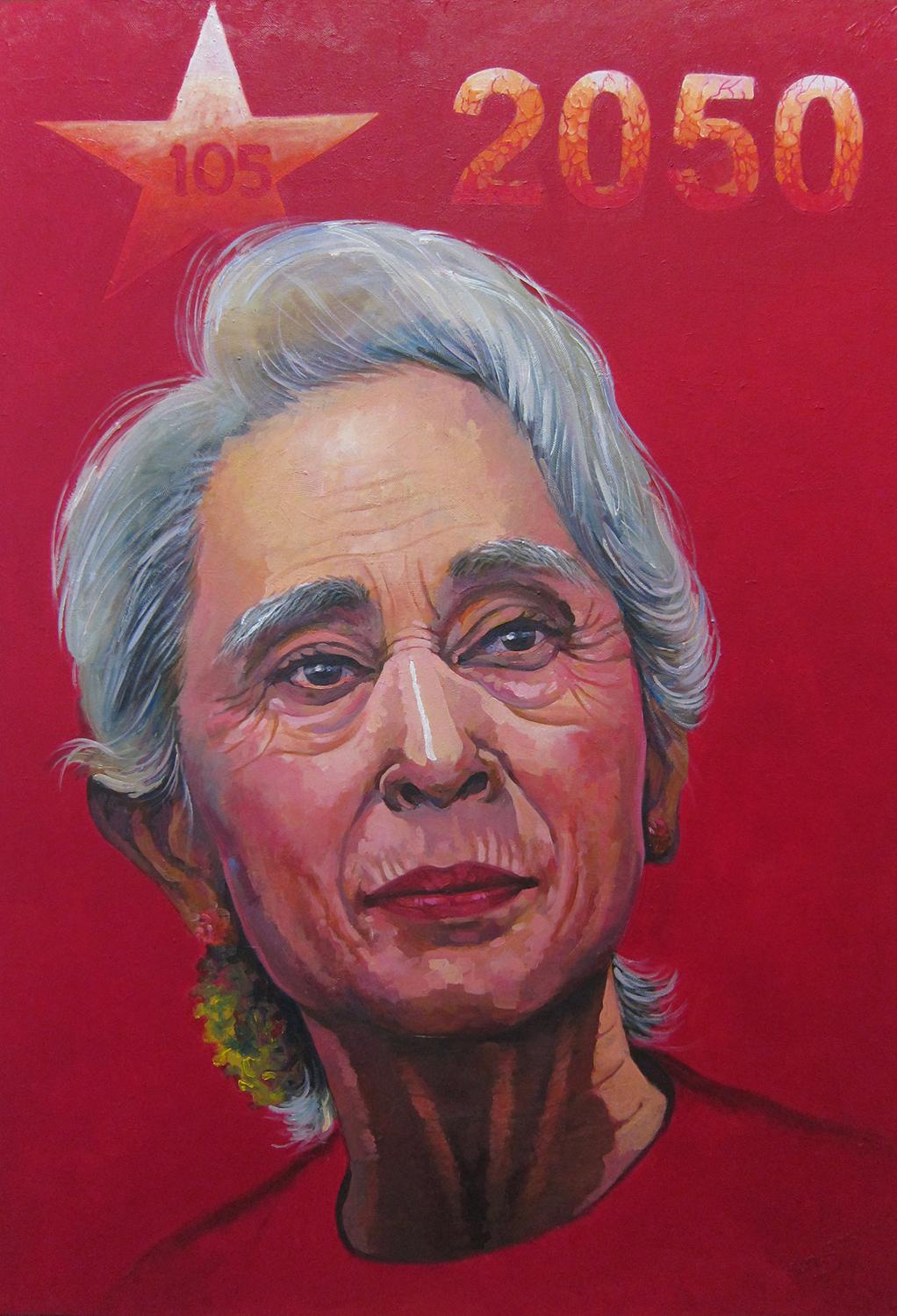 She says she was surprised at how few works were overtly political.

“Especially given the current strife in the Rakhine crisis, I expected more paintings that referred to that,” she told Frontier. “I don’t know if that is because the artists don’t find [political issues] an interesting subject, or that they don’t want to go political because they fear there will be implications to them.”

Yee Nan Thike’s “2050 Towards the New Modern and Developed Nation” – a title that riffs on a favourite slogan of the former military regime – shows scores of men, women and children, each with an identical cartoonish grin, piled on the back of a rusty truck driving on the clouds towards towards glittering skyscrapers in the distance.

It is difficult to tell if that painting is optimistic or cynical – a common characteristic of the works in “Myanmar 2050”.

Although one impressionist work by Aung Kyaw Htet is titled “Eternal”, the painting seems to show traditional Bagan ox carts fading out of focus.

“Daw Suu 2050” by Hla Tun is a typical portrait of The Lady, but with grey hair and more wrinkles. Does the painting wish her a long and prosperous career? Or express anxiety that nothing will change in 30-plus years?

Htan Kyaw Htay, for one, is optimistic. His migrant silhouettes look forward to the day when leaving home to escape squalor and oppression is just a faded memory.