Police say they will take action against organisers of Thursday’s protest, which denounced a reference to Myanmar’s Rohingya population in a statement expressing condolences to victims of a marine tragedy.

YANGON — Several hundred nationalist protestors assembled outside the gates of the United States Embassy in Yangon on Thursday afternoon, denouncing the inclusion of the word “Rohingya” in a statement which expressed condolences for the victims of a marine accident in Rakhine State earlier this month.

The protest, attended by a number of monks and nationalist activists, demanded the embassy statement “legalising Rohingyas” be deleted and declared that anyone who used the term or supported “the Rohingya story” was an enemy of the country.

“We totally reject any addition to the native 135 ethnic groups in Myanmar,” protestors shouted outside the embassy, a reference to the 1982 Citizenship Law which formalised the country’s permitted ethnic identities. “Bengalis are not Myanmar native ethnic people. Not at all.”

In keeping with past practice, copies of the slogans drafted by protest leaders were circulated through the crowd in English and Burmese in an apparent attempt to maximise media exposure to the rally’s demands. 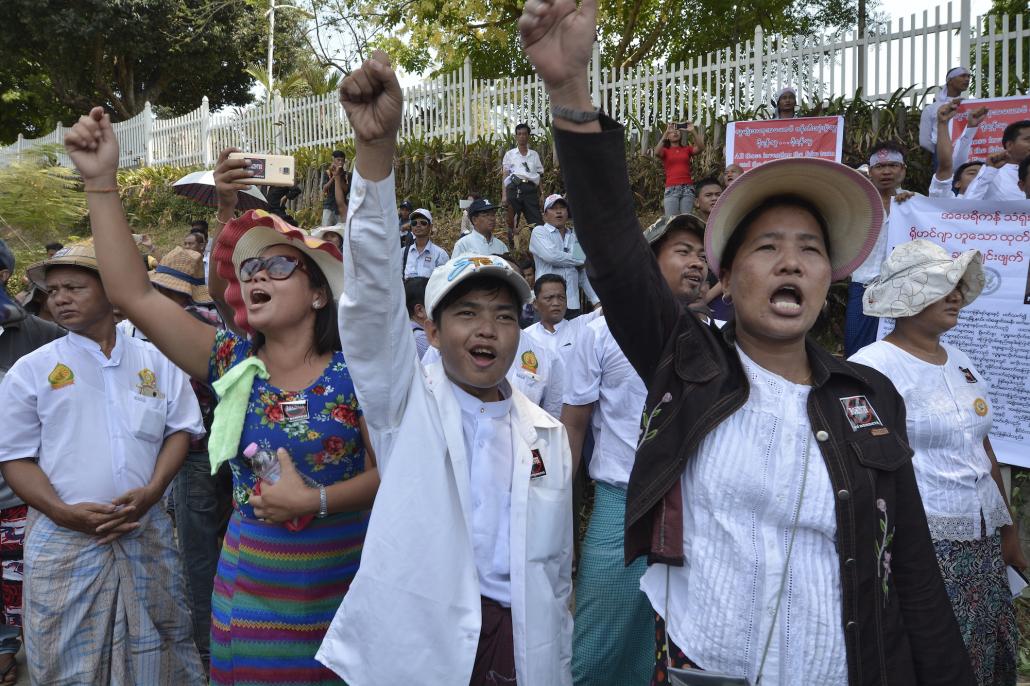 Nationalists protest outside the US Embassy in Yangon on Thursday. (Teza Hlaing / Frontier)

A handout containing the slogans, which also called on the United States to take Myanmar’s Rohingya population to America if it “sympathises with Bengali liars”, concluded by wishing new US Ambassador Scot Marciel and “all our beloved American friends” happiness, health and peace.

Among the rally’s attendees was U Parmaukha, a prominent leader of the Association for the Protection of Race and Religion, also known by its Burmese acronym Ma Ba Tha.

“The new government should solve this Bengali problem by 1982 Citizenship Law and the US government must best respect Myanmar sovereignty.” 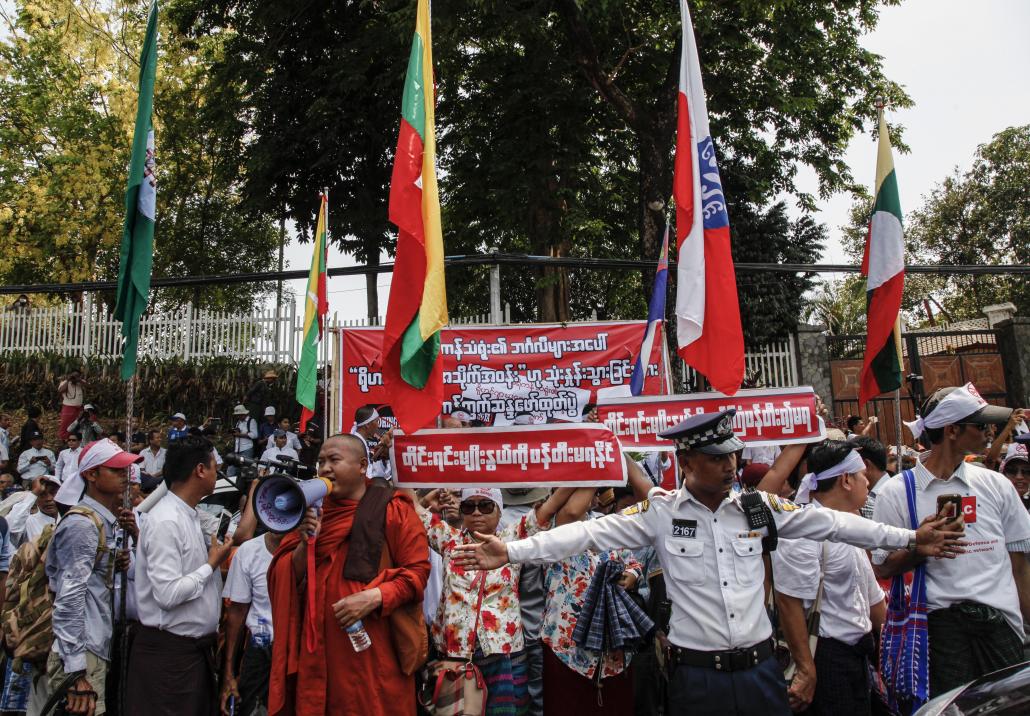 Nationalists protest outside the US Embassy in Yangon on Thursday. (J / Frontier)

A separate statement in English distributed at the rally, issued by the Myanmar National Network and signed by the organisation’s president Ko Win Ko Ko Latt, said that use of the term Rohingya was an “effort to intentionally provoke social and religious conflicts and riots in our nation”.

“Using the term Rohingya is [an] offence not only to local native ethnic Rakhines but also to all ethnic groups in Myanmar,” it read. “The United States of America is seriously urged to respect diplomacy ethics (sic) and avoid using the fake term Rohingya from now on.”

The Kamaryut Township police station had initially granted organisers permission to stage a rally with a maximum 300 participants at the Bo Sein Hman field in Tarmwe Township, well away from the US Embassy.

Organisers ignored the directive and instead assembled at the Yangon University before marching to the nearby embassy compound.

However, Lieutenant-Colonel Kyaw Htut, a spokesman for the Western District Police Station, told Frontier on Thursday the police would take action against organisers under the Peaceful Assembly Law, a charge that carries a potential maximum of three months’ imprisonment. 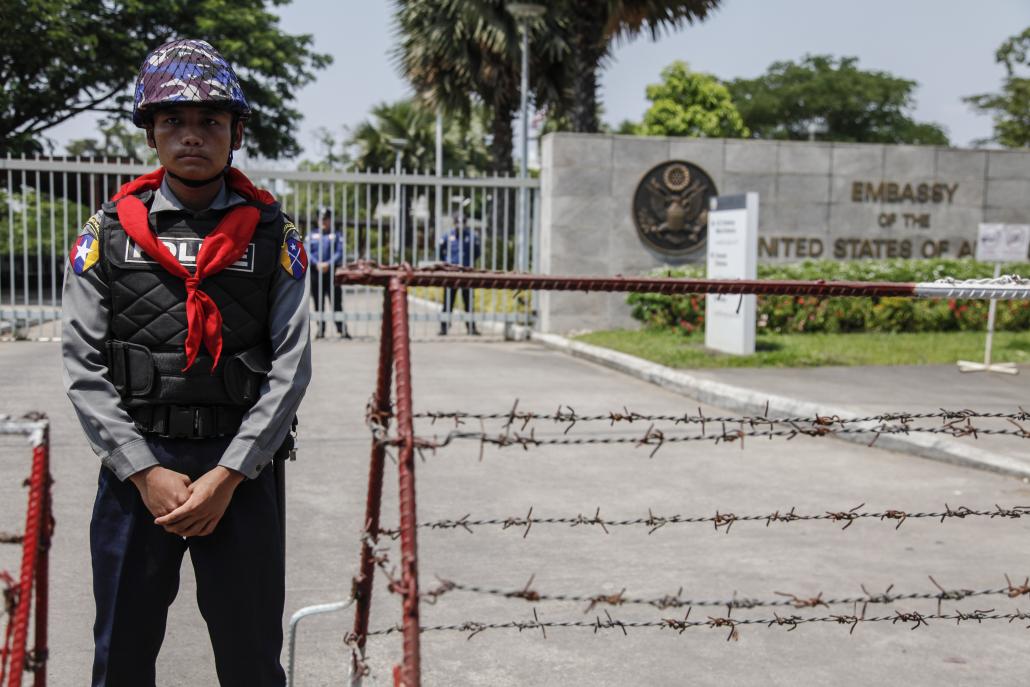 A police officer outside the US Embassy on Thursday afternoon. (J / Frontier)

The statement that sparked the protest, issued by the US Embassy last week, expressed condolences for the families of the victims who died when a boat capsized in rough waters near the Rakhine capital of Sittwe. At least 21 people died in the tragedy, with at least seven of the victims aged eight or under.

Most of the passengers were Rohingya Muslim residents of Sin Tet Maw camp in nearby Pauktaw Township. They had moved there in the aftermath of the communal violence which rocked the state in 2012, claiming hundreds of lives.

Myanmar’s former government and much of its population refuses to recognise the nation’s Rohingya population, estimated to be as many as 1.1 million people, and instead consider them to be illegal immigrants from neighbouring Bangladesh.

Many of those self-identifying as Rohingya have documentary records proving their ancestry in Myanmar goes back generations. The Rohingya community was permitted to vote in the 2010 election before being disenfranchised by the last government in 2015, in an apparent response to pressure from nationalist groups.

The embassy’s statement added that it welcomed the new government’s commitment to “improve conditions for all people in Rakhine State and promote reconciliation, peace and stability”.

Staff at the embassy were reportedly asked to leave their offices at midday before protestors arrived. The embassy’s media liaison could not be reached for comment on Thursday morning.