Prize-winning Mandalay painter Myo Khin can turn out more than 300 abstracts a year but his career was going nowhere until he made the change from watercolours to acrylic.

THE hundreds of watercolour paintings that the artist had been working on for a year had been reduced to a pile of ashes. He destroyed them because they did not satisfy him. A mentor advised him to try painting with acrylic instead.

The artist was reluctant but he tried the new medium out of respect for his mentor. After more than 30 works in acrylic he was still not satisfied.

He had one blank canvas left in his studio but had lost all motivation to paint. Depressed, he thought about his father who died when he was young. The memory of his father inspired him to try again. After hours of painting, the artist stepped back to appraise what he had created. 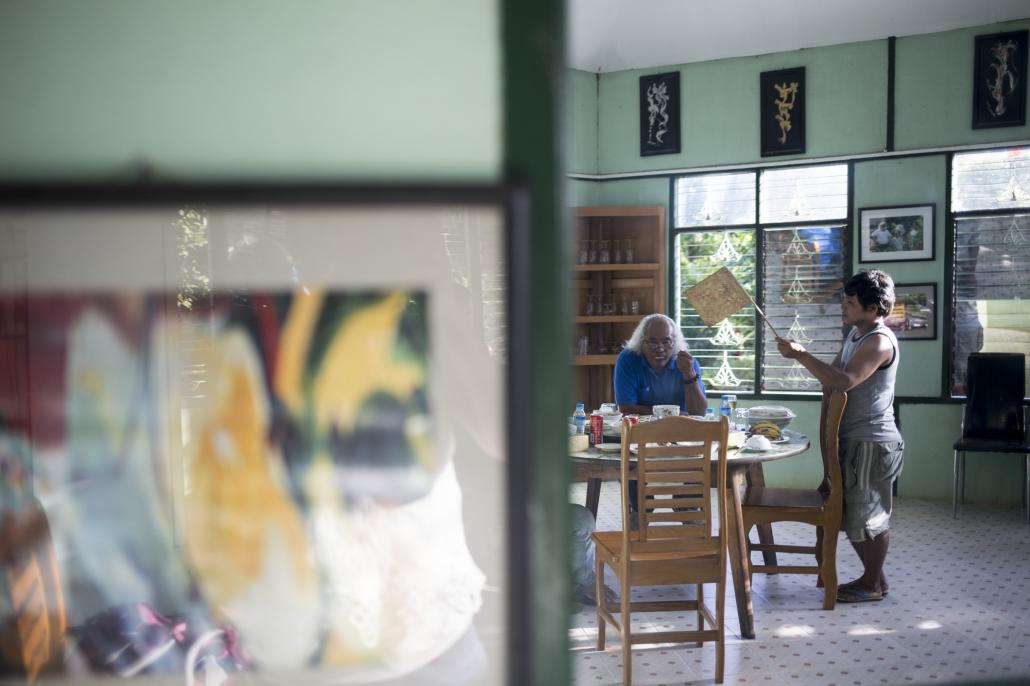 Moments later, a young boy strolled into the studio. The artist asked the boy what he was doing.

“It’s the morning; I have to clean my room,” the boy replied. It was then the artist realised it was 6am and he had been painting all night. 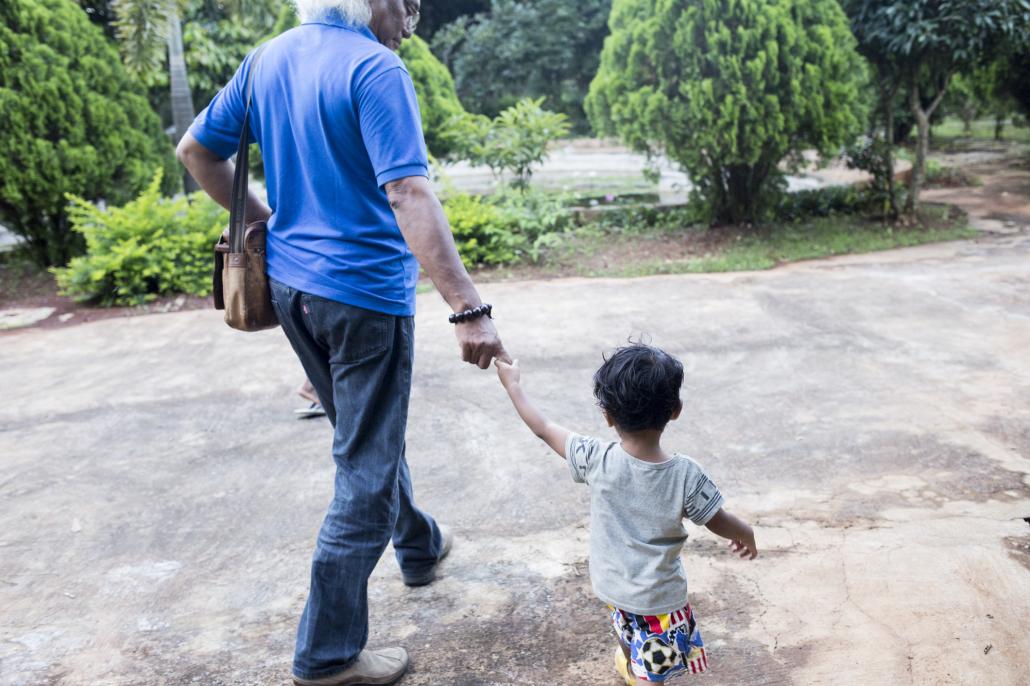 When that conversation took place, the artist was 50 and almost unknown in Myanmar.

That was before U Myo Khin, 67, became one of the country’s most famous and controversial modern abstract artists, renowned for his bold use of colour.

Myo Khin grew up in Mandalay and after completing his education worked as a trainer for the Ministry of Cooperatives in the city sometimes known as Myanmar’s cultural capital.

During the anti-government uprising in 1988 he led a strike by ministry staff and after the revolt was crushed by the military he went into hiding. His refuge was the area around the pagoda-crowned Tantkyi Hill in Magway Region that overlooks the Ayeyarwady River and beyond it, the plain of Bagan. Myo Khin spent nearly a year there, relaxing and meditating.

“I could concentrate on what I was feeling at the time. I was always thinking that was the time for my next big change,” Myo Khin told Frontier. 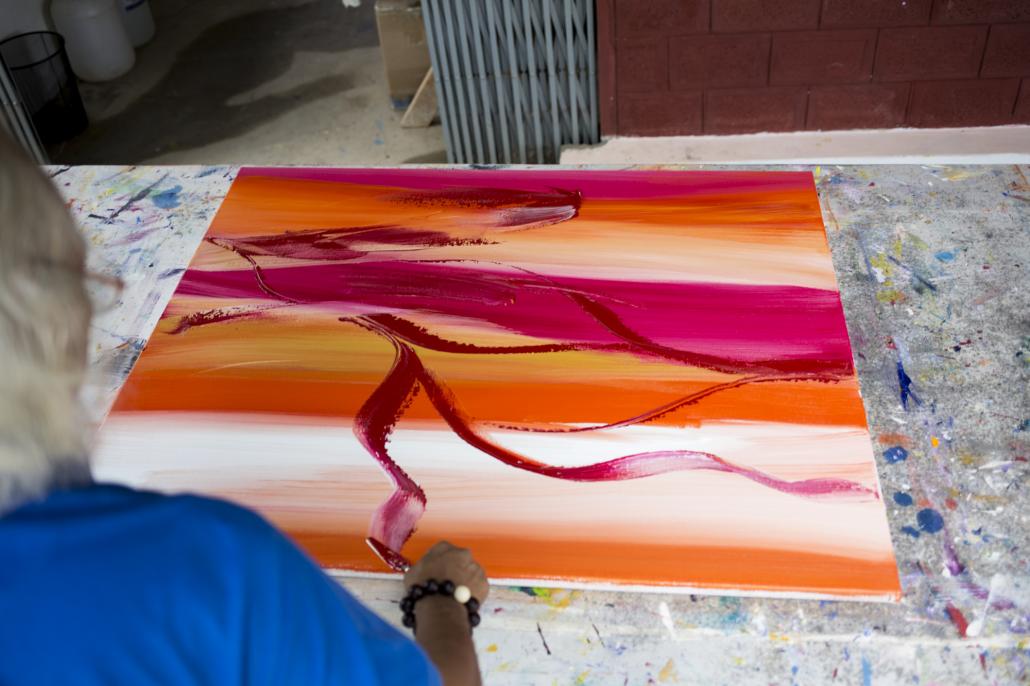 When he returned to Mandalay in 1989 he was unable to return to his job at the ministry. He lived at his aunt’s house and had little to do.

One night in 1990 at a food donation ceremony hosted by a friend, Myo Khin saw a homeless old man who had no protection from the cold. He gave the old man a blanket to keep warm.

In the morning, they began talking and Myo Khin discovered that the old man had once been a famous chef in Mandalay.

Myo Khin used the savings he had available, about K20,000, to open a small fried noodle shop and employed the old man to do the cooking.

The shop was a success and after it had been running for three years, Myo Khin had saved K4 million. He used the money to open the Thin Padauk restaurant, at the time one of the most famous in Mandalay. His next business venture was Padauk Min, a small branch of moneylenders. 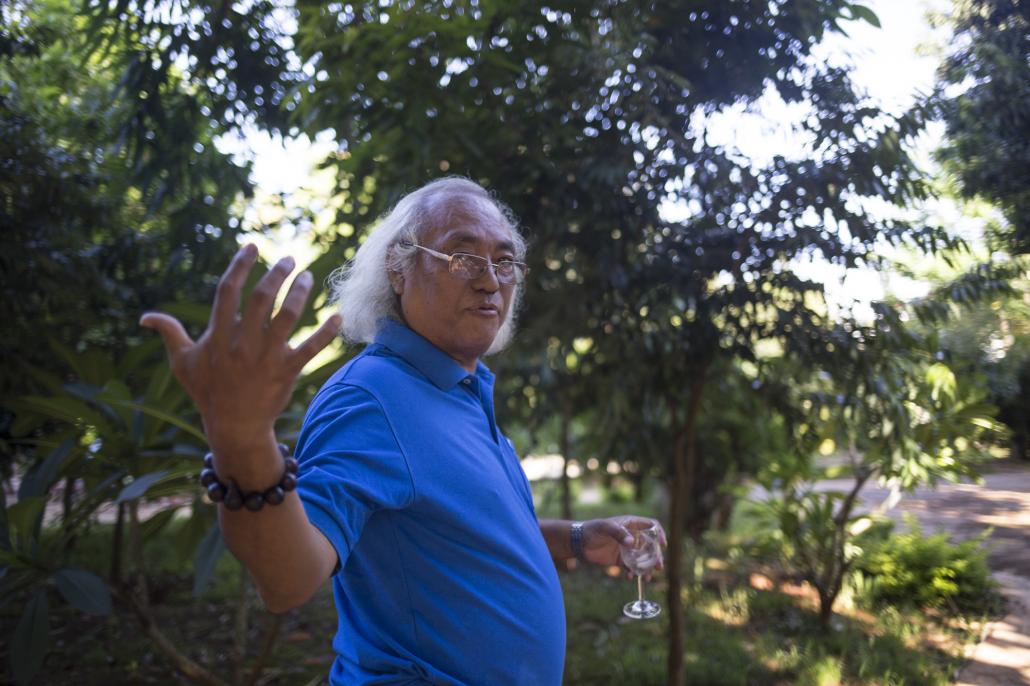 Business flourished, enabling Myo Khin to found the Htan Yeik Nyo Arts Community in Mandalay. He collected realist works by renowned painters in Upper Myanmar and began inviting artists and writers to work at the community.

His situation took a turn for the worse after 1996, the year of the military government’s “Visit Myanmar” tourism campaign.

Myo Khin had lent large sums to many people but an economic downturn meant they were unable to repay their loans. He had debts totaling billions of kyat. He used all his savings and sold most of his property to help clear his debts.

“I almost wanted to commit suicide; but now I realise I was lucky,” Myo Khin said. He wanted to sell the site at Ahnee Sakhan to clear his debts but the land could not attract a buyer.

Myo Khin spent about three years deep in debt. He was so depressed he hid away at home and could not face going out during the day.

“I had all of these paintings at home and realised I wanted to … leave something behind after I died. It was then I decided that I wanted to paint,” he said. 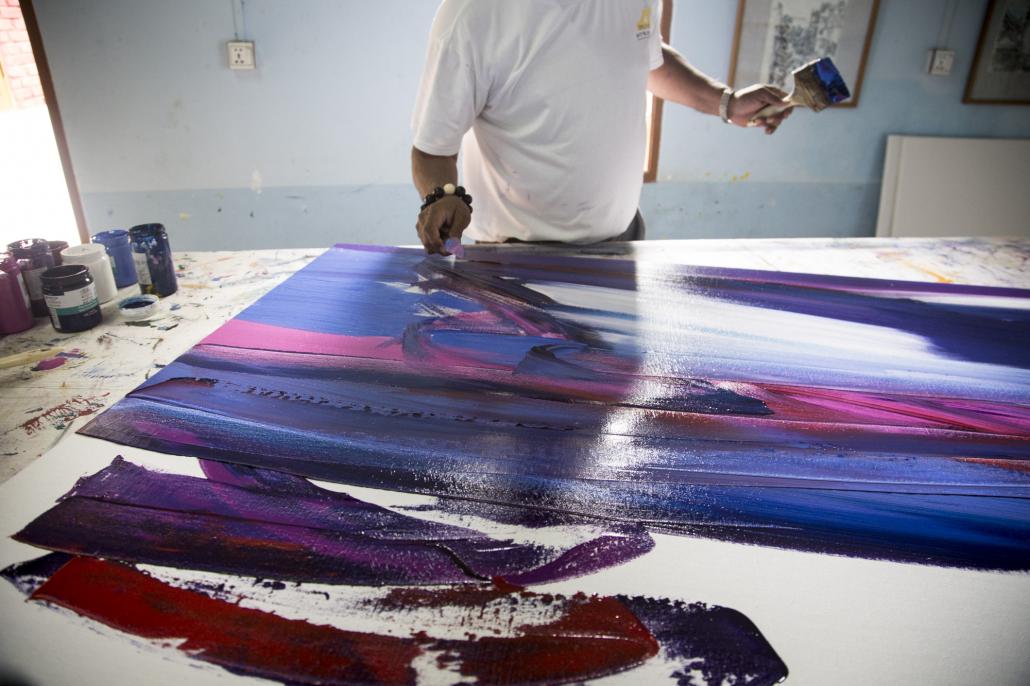 There was a problem. He knew nothing about painting techniques and the theories about using colour. His interest in art – he had a collection of about 50 paintings that had been stored away in a room for about three years – inspired him to try to paint.

“As I had been a dealer of paintings for four years and spent many years in that room, I knew what was good and what was terrible. I knew the paintings. I was inspired and crazy about U Ba Thet [a famous realist painter]. But I was not interested in copying the same pictures onto canvas,” he said. 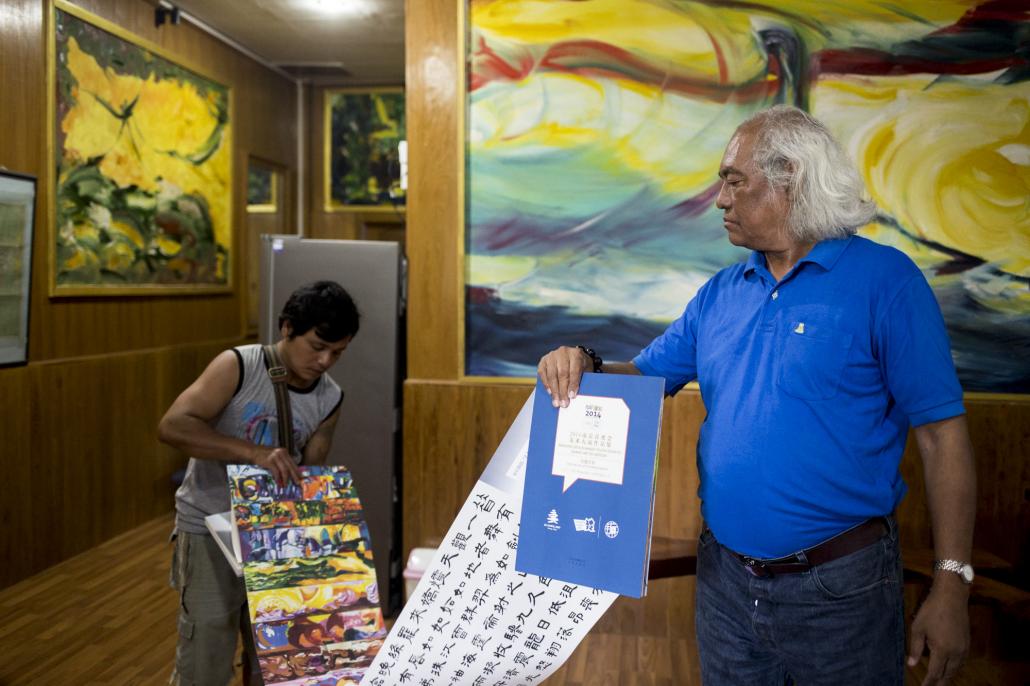 Although he didn’t know much about painting, Myo Khin painted what he felt. As well as the watercolours he reduced to ashes, he had also destroyed dozens of works in acrylic after his change to that medium. It was many years before his work began to be recognised.

The first exhibition of Myo Khin’s abstracts was held in Mandalay in 2001. Abstract art had few buyers in Myanmar then and a collector from Switzerland became his first big client. Myo Khin said the collector spent about K50 million (about US$42,300 at today’s rates) a year on his paintings until 2005.

“I still was unable to pay back all of my debts, as I had to use a lot of it on daily expenses and supporting my family,” said Myo Khin, who has a daughter and two sons.

After Myo Khin sold a collection of his paintings to a museum in Singapore, he was able to spend the next few years relaxing. As he emerged from his years of depression, he spent his days drinking Mandalay Rum with his artist friends and discussing art. Today, Myo Khin only drinks Johnny Walker Gold Label whisky. 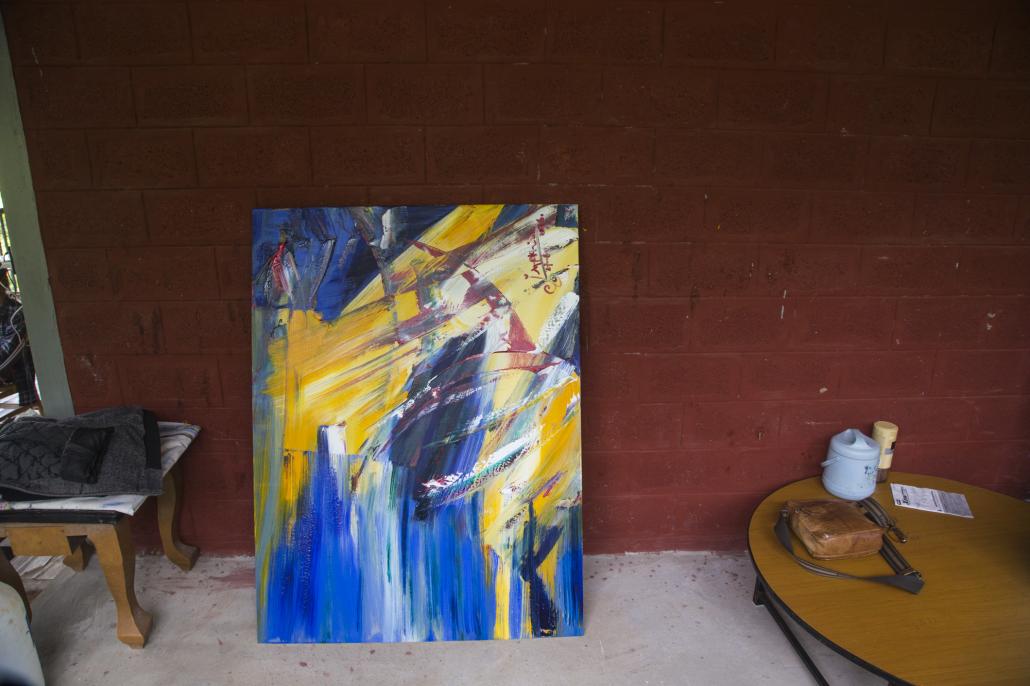 Then in 2005 a counsellor at the Chinese consulate in Mandalay began buying his paintings. The counsellor often came to the gallery at Myo Khin’s house to buy his abstracts.

“I couldn’t believe this moment when a Chinese counsellor came to my house with another rich Chinese guy. It was the moment my life changed,” he said.

The wealthy Chinese man, the counsellor’s friend, bought 300 of Myo Khin’s abstracts, at $100 each. The buyer said he would be back and encouraged Myo Khin to paint as much as he could. Myo Khin did not believe him because there were few people showing interest in his work at the time.

In early 2006, the man returned and wanted to buy more paintings. Myo Khin had nothing to offer. He had not believed what the man told him the previous year, and had sold all his paintings. The proceeds from the sales were often used to pay debts.

The Chinese man was such an avid fan of Myo Khin’s works that he negotiated a contract with the artist to buy all the paintings he could produce for 10 years. Myo Khin created at least 300 works a year and his wealthy Chinese client paid in cash.

“Finally, I could pay back my debts. I no longer did any other business except selling paintings. Then I became famous as Htan Yeik Nyo Myo Khin,” he said.

His success was not without controversy. Many painters in Upper Myanmar accused him of not being a real artist who worked only for financial gain.

“My old colleagues came to my place but I couldn’t see them because I was painting 300 paintings a year,” Myo Khin said. “If something interrupted me, I couldn’t concentrate on painting for a week. I was doing it with my heart so I couldn’t let anything interrupt me. But my colleagues didn’t understand me,” he said, adding that some years he produced 600 paintings.

In 2006, he travelled to Beijing to paint there at the invitation of his rich client. He was proud to see his works displayed in modern art museums in the Chinese capital, where he was known in the artistic community as Mao Kha.

The wealthy client began producing books featuring Myo Khin’s works. He was disappointed when he discovered that a biography in the books described him as being a Myanmar artist of Chinese origin.

“I don’t want to seem ungrateful to that Chinese client, because I have to thank him for buying my artwork for years, but I felt sad about that,” Myo Khin said, referring to being described as being of Chinese origin. 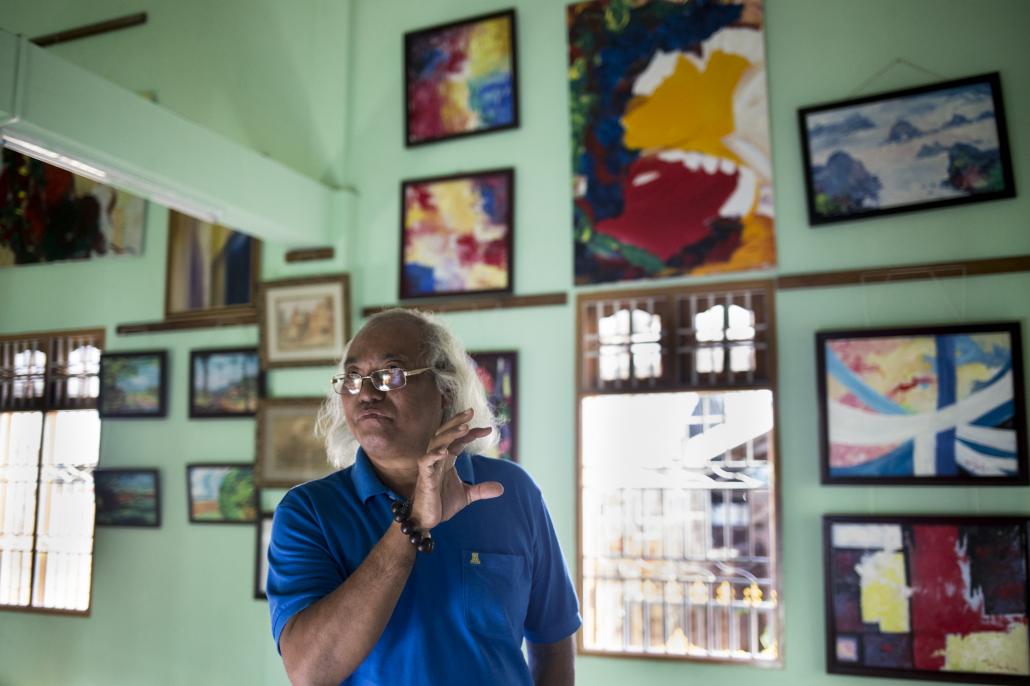 A highlight of his artistic career was winning a gold award in a fine art competition held to mark the 2008 Beijing Olympic Games that attracted thousands of entries from around the world. The award is one of many that Myo Khin has won in China, where his works have been featured in exhibitions throughout the country.

Myo Khin travelled often to China until 2013, when his mother fell ill and he decided to remain in Myanmar. He has not returned to China.

In 2012, he began building the Htan Yeik Nyo Arts Creation Centre on his 2.8 hectare (seven acre) plot at Ahnee Sakhan. The centre, which opened in 2014, is aimed at helping artists who are passionate about their work but struggle to make a living. Artistic events are hosted at the centre, a creative hub in a compound that includes statues and sculptures.

The initial contract with his rich Chinese client has expired, but the pair has renegotiated the terms. Myo Khin will produce 150 paintings a year.

Among the artists who have been inspired and influenced by Myo Khin is U Tun Sein, who paints in a similar style. One of the buildings at Ahnee Sakhan is filled with Tun Sein’s works.

“Myo Khin is the most detailed artist I’ve ever known; I respect him,” Tun Sein said.

Myo Khin, who is rarely mentioned in vernacular newspapers and journals, doesn’t seem to care about the artists in Upper Myanmar who regard him as being motivated only by money.

“I have paid back my debts and my dreams have come true. I think I can die now,” he said.