YANGON — Protesters in Myanmar called for the military to loosen its grip on politics Wednesday, as tensions mount over the country’s army-drafted constitution ahead of national elections next year.

The 2008 charter, enacted by the ruling junta after decades of repressive army rule, bars embattled civilian leader State Counsellor Daw Aung San Suu Kyi from the presidency and forces her to share power with the generals.

It also guarantees a quarter of parliamentary seats to the armed forces, along with powerful defence and security portfolios.

Parliament is set to discuss proposed amendments to the document but military MPs hold a veto on any changes, prompting more than 1,000 protesters to gather in downtown Yangon and shout slogans demanding constitutional reform.

“I think the military should stand with and think for the public,” said Yangon resident Thi Thi Han.

But opinion over the issue is split, and a rival protest later on Wednesday demanded Myanmar leaders keep the charter as it is.

“Democracy here is so young, it requires the military to be in parliament until democracy is fully fledged,” said 39-year-old Zar Chi Lin. 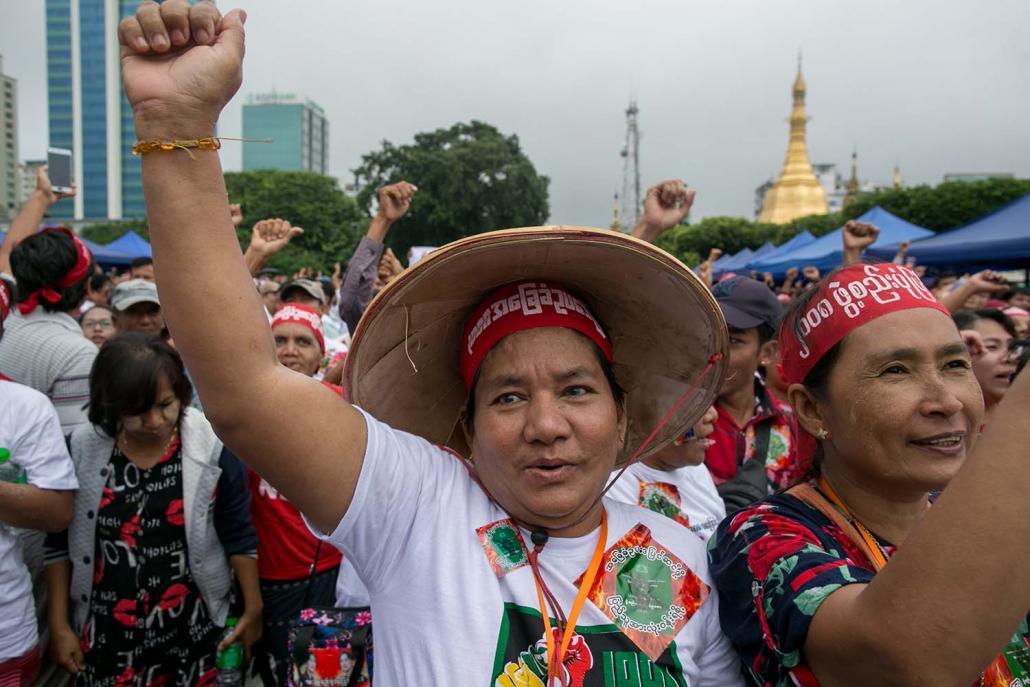 People participate in a protest in support of amendments to the 2008 constitution in Yangon on July 17. (AFP)

The constitution has long been a flashpoint in Myanmar politics.

Aung San Suu Kyi’s party, which won a landslide victory in 2015 elections, wants to downsize the role of the armed forces. But the military insists it plays a stabilising role in a country riven by conflict in border areas.

Both the locally revered Aung San Suu Kyi, a Nobel Peace Prize laureate, and Myanmar’s army chiefs have been criticised for a brutal crackdown on the Rohingya Muslim minority in the country’s west that provoked international outrage and a refugee crisis.

The charter bars the de facto leader from the presidency because of an article that prevents anyone with a foreign family members from occupying the post. Aung San Suu Kyi was married to a British academic, with whom she had two sons.

Instead she took up the role of state counsellor after winning landslide elections in 2015.

Hardline nationalists oppose any constitutional amendments that would push the military to the fringes of political power.

Aung San Suu Kyi’s former legal adviser U Ko Ni, who had worked on drafting changes to the charter, was shot and killed two years ago in a plot by former military officers.