Myanmar goes back to school

The Ministry of Education has embarked on an ambitious project to completely rebuild Myanmar’s outmoded education system.

Educator Tim Aye-Hardy doesn’t support child labour. He believes children should be in school. But he finds that’s a hard case to make with an education system as bad as Myanmar’s.

“The ones who go through school end up working the same tea shop as other workers who only complete first or second grade. So it’s a no brainer for the parents,” Mr Aye-Hardy said.

His organisation, My Mobile Education, tutors youngsters working in tea shops in their spare time. When he discusses government schools with their parents, they talk about expensive supplies, overcrowded classrooms, unmotivated teachers, under-the-table private tutoring and only marginally better career prospects at the end of it. It comes as no surprise that one in four Myanmar children aged under 14 is not in school.

And it comes as no surprise that the government has decided to rebuild the system from scratch.

The Ministry of Education is in the final research phase of a sweeping National Education Sector Plan (NESP) that will try to build a new, modern education cycle in five years, and fully implement it by 2030. If successful, every subject at every level would be taught by teachers trained in modern methods. Students would learn critical reasoning instead of rote memorisation, discuss and ask questions instead of sitting through lectures, and eventually emerge from their schooling with knowledge that has more use than passing a final exam.

“This plan is quite an incredible transformation, if it is implemented,” said Lynne Heslop, education director at the British Council, one of the Ministry of Education’s development partners. “Usually in countries that make changes to their reforms, they do it bit by bit…But here, Myanmar is transforming the whole system over the next five years.”

The planning stages have been as ambitious as they are methodical. They began in 2012 with a line-by-line survey of the entire system, the Comprehensive Education Sector Review (CESR), which identified three broad shortcomings in the rusty basic education cycle: Access to education, quality of education, and real-world value of the learning.

The review team is drafting the final NESP and its reforms range from kindergarten to university level and include monastic schools. A new 13-year curriculum is slated to roll out one year at a time starting in 2017 at first grade level.

Few doubt the current education system needs to go. How, exactly, to do away with it is a different question.

“They’re going to revise the whole shebang. They haven’t done that for 25 years. Since the ‘80s, they haven’t really updated their textbooks,” Cliff Meyers, chief of education for UNICEF Myanmar, told Frontier earlier this year. “They want their workforce to have employment skills. They want their kids to be able to graduate and be able to work, compete.”

Yet the ministry’s year-by-year schedule will take more than a decade to implement and neglect an entire generation of students who enrolled before 2017. It isn’t a great option, said Mr Meyers, but it may be the least bad one.

“If you start changing [curriculum] all in one fell swoop, then the kids in grade ten are going to start getting textbooks which may have left out things which are now being shifted to grade eight. So, you’re going to miss geometry because now that’s in the grade you’ve already completed.”

Even with gradual change, getting Myanmar society to accept the reforms will be another problem.

“When you start with interactive learning and student centred approaches, it’s a shock,” Mr Meyers said. “When a parent passes a school and doesn’t hear students chanting in unison what the teacher has written on the board, they think, ‘What’s going on in there? They aren’t learning’.”

The British Council’s EfECT project (which stands for English for Education College Trainers) trains teacher trainers in English language skills and modern, child-centred methods that will hopefully replace the old listen-memorise-repeat. Two participants – who asked to remain anonymous but have been teachers or teacher trainers for decades – described the techniques that encourage students to discuss, ask questions and solve problems for themselves, their limited English peppered with terms such as “learning outcome-based success criteria” and “concept skills”.

As teacher trainers, their favourite part of the training was learning how the teaching methods blended Myanmar traditions with a Western approach, though they said parents and communities may be slow to get used to them. The current basic education cycle hinges on a single exam based on recitation of memorised material. It isn’t easy – in fact, in many cases students must pay for illegal private tutoring to learn everything on the final exam – but it is at least straightforward.

“Most parents want their children to memorise what they need to get good marks,” one of them said. “So we, the educators, will try to change their mind. Getting thinking skills is more important than good marks.”

Japan International Cooperation Agency education representative Ami Ikeda is optimistic. JICA is partnering with CESR not only to develop a new primary school curriculum, but also to try to sell it to Myanmar society.

A new Level 1 arithmetic textbook uses images and examples to help students understand the basic concepts of addition, subtraction and multiplication without simply memorising patterns and charts. The full-colour book is filled with images of chickens, water buffalo and people in longyis.

“We thought one of the reasons the dropout rate is so high is because the teaching is not attractive for the children,” Ms Ikeda said. Hopefully, the new textbooks will speak for themselves. “Obviously, the change is very clear, not only for memorising but also for thinking. It’s a clear message for education reform for the children and the community.” 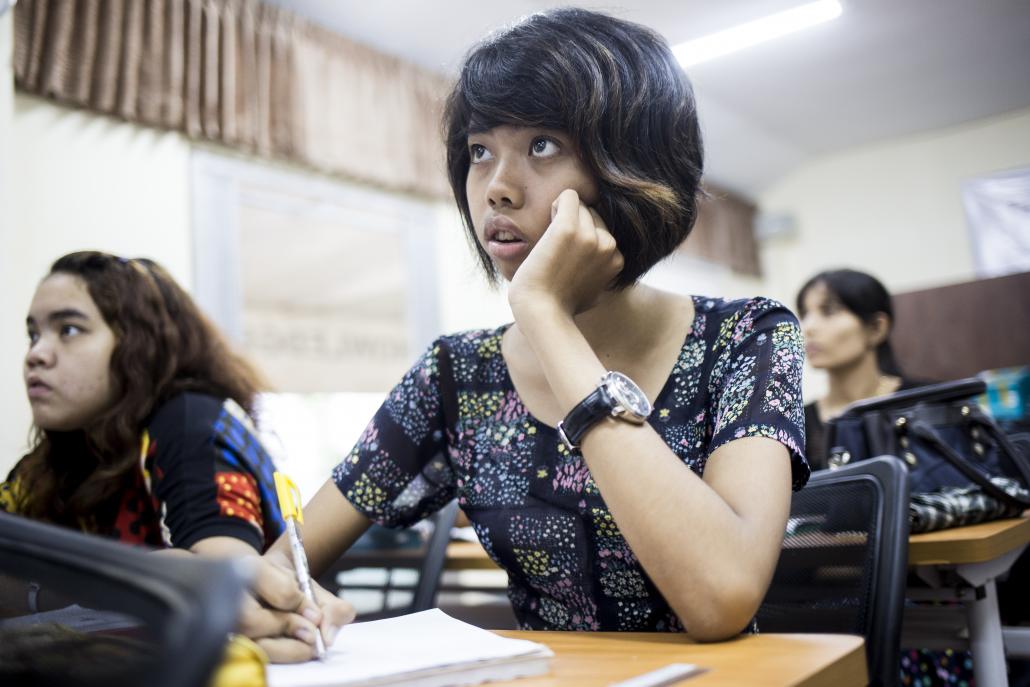 The new textbooks will be provided free to students but the printing and distribution will be the responsibility of the ministry.

Nobody is quite sure what NESP will cost, as the financial plan is under discussion. But it is certain that the bill will be enormous.

The government expanded its education budget by K300 million this year (to K1.4 trillion), and allocated funds to hire another 50,000 teachers at primary level – the standard entry position. Yet NESP still relies on financial support from organisations such as UNICEF, the British Council and JICA.

Exactly who will give what is still up in the air.

The project’s reliance on so many agencies for money, consultants, trainers, curriculum design and other resources is one of the project’s biggest weaknesses, said Daw Khin Mar, director of World Education, a Myanmar NGO working with CESR on non-formal and monastic education.

“We have been invested with this for three years, human resources and financial resources, but we are not quite sure who will take it forward,” she said. “They have a systematic approach, and they try to involve many partners. This is good. But the CESR team doesn’t have decision-making power on certain things. They have to submit their reports to the Ministry of Education, and when they receive them back from Nay Pyi Taw, some of their findings are not what they discussed. They are not correct.”

Daw Khin Mar, who oversees sub-offices in Kayah and Kayin states, said the disorganisation is especially hard on the project’s ethnic partners. She claimed meetings and conferences would often be rescheduled or cancelled at short notice, effectively snubbing participants based outside Yangon.

This is especially ironic because one of NESP’s big selling points has been its region-specific curriculum reaching beyond the cities.

“The process is good,” she said. “But I’m not optimistic about implementing this. They don’t have the capacity.”

“The scope of the plan is very large,” said Ms Heslop. “It’s not changing small things. It’s changing core education provision. That’s probably the biggest challenge. The enormity of the project,” she said.

The reforms are designed not only for basic education, but universities, vocational training and monastic schools, not only Mandalay and Yangon, but the mining settlements in Kachin and fishing villages in Rakhine.

Ms Heslop doesn’t think the undertaking is impossible – because she believes total reform is inevitable sooner or later – but the endeavour may simply be too big for so many promises so early in the game. Will Myanmar people keep their faith when things inevitably don’t go exactly as planned?

“There’s going to be a challenge in expectation because people in Myanmar want things to happen quickly. And whether this happens as quickly as the public demands it to happen, I don’t know.”

Nevertheless, the stakes have never been higher for reform, said Mr Meyers. ASEAN is working toward a standardised education framework. The Philippines and Laos have already adopted their own 13-year cycles, and as ASEAN’s newest member, Myanmar finds itself woefully behind.

Yet behind Myanmar’s decades of isolation and suppression lies a deep love of learning. Mr Meyers, who was once the regional education chief in Southeast Asia, has seen similar plans wither and collapse. Yet here, he is optimistic.

“In Myanmar there’s a long history and a great tradition of self-reading and self learning and self-study,” he said. “Monasteries were used to teach reading and writing going back a thousand years, and progressive kingdoms incorporated that literary tradition. It has always been there.”

“We have the responsibility now,” one EfECT trainee said. “All of the people need to change. And they will. They will welcome it, because everyone needs change.”

The explosion of COVID-19 cases throughout since mid-August is dealing a heavy blow in key sectors and the worst may not be over.
BY Sithu Aung Myint