A rough guide to Myanmar’s geography, from the temperate Kachin hills to the rainforests and coral reefs of Tanintharyi. 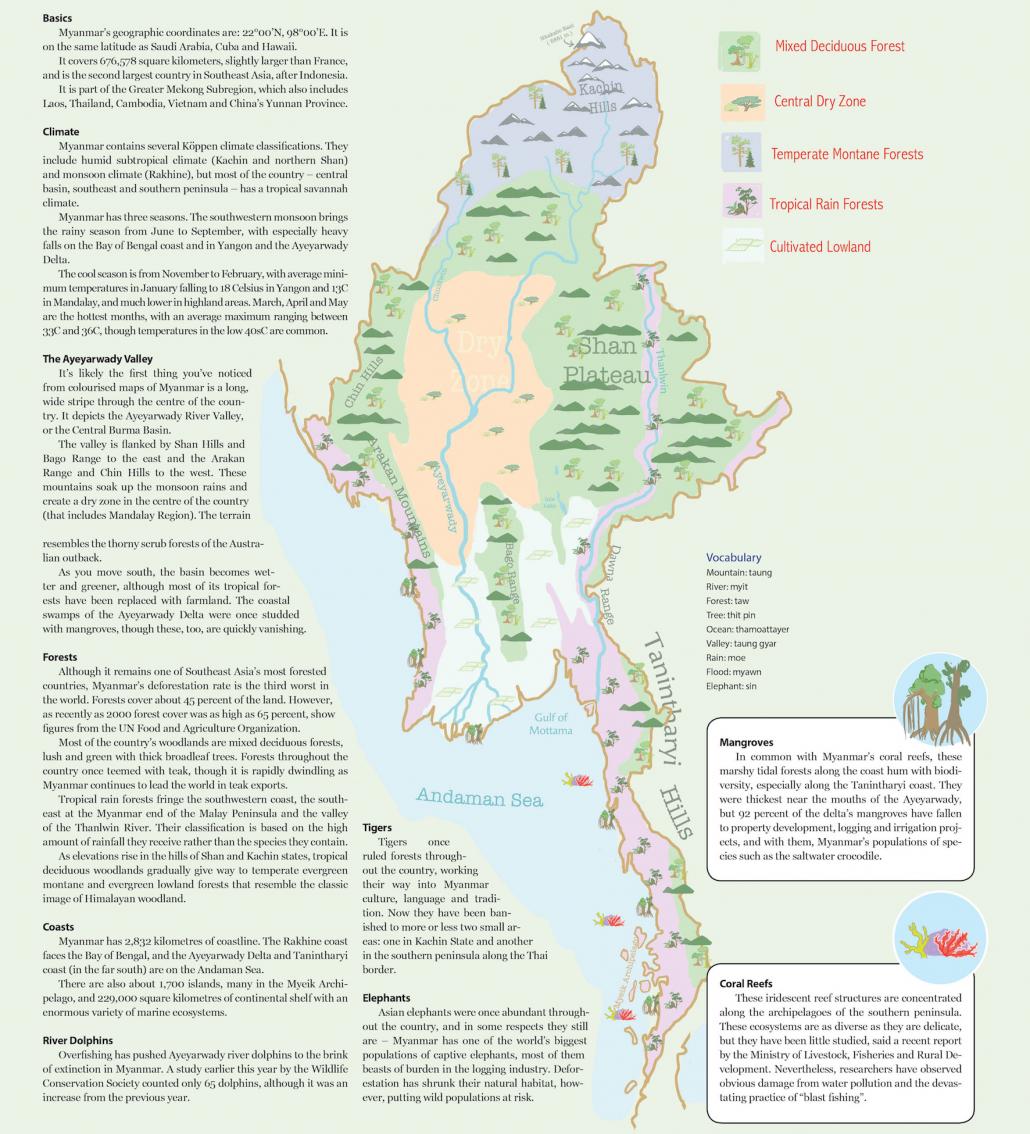 Myanmar contains several Köppen climate classifications. They include humid subtropical climate (Kachin and northern Shan) and monsoon climate (Rakhine), but most of the country – central basin, southeast and southern peninsula – has a tropical savannah climate.

Myanmar has three seasons. The southwestern monsoon brings the rainy season from June to September, with especially heavy falls on the Bay of Bengal coast and in Yangon and the Ayeyarwady Delta.

The cool season is from November to February, with average minimum temperatures in January falling to 18 Celsius in Yangon and 13C in Mandalay, and much lower in highland areas. March, April and May are the hottest months, with an average maximum ranging between 33C and 36C, though temperatures in the low 40sC are common.

It’s likely the first thing you’ve noticed from colourised maps of Myanmar is a long, wide stripe through the centre of the country. It depicts the Ayeyarwady River Valley, or the Central Burma Basin.

The valley is flanked by Shan Hills and Bago Range to the east and the Arakan Range and Chin Hills to the west. These mountains soak up the monsoon rains and create a dry zone in the centre of the country (that includes Mandalay Region). The terrain resembles the thorny scrub forests of the Australian outback.

As you move south, the basin becomes wetter and greener, although most of its tropical forests have been replaced with farmland. The coastal swamps of the Ayeyarwady Delta were once studded with mangroves, though these, too, are quickly vanishing.

Although it remains one of Southeast Asia’s most forested countries, Myanmar’s deforestation rate is the third worst in the world. Forests cover about 45 percent of the land. However, as recently as 2000 forest cover was as high as 65 percent, show figures from the UN Food and Agriculture Organization.

Most of the country’s woodlands are mixed deciduous forests, lush and green with thick broadleaf trees. Forests throughout the country once teemed with teak, though it is rapidly dwindling as Myanmar continues to lead the world in teak exports.

Tropical rain forests fringe the southwestern coast, the southeast at the Myanmar end of the Malay Peninsula and the valley of the Thanlwin River. Their classification is based on the high amount of rainfall they receive rather than the species they contain.

As elevations rise in the hills of Shan and Kachin states, tropical deciduous woodlands gradually give way to temperate evergreen montane and evergreen lowland forests that resemble the classic image of Himalayan woodland.

Myanmar has 2,832 kilometres of coastline. The Rakhine coast faces the Bay of Bengal, and the Ayeyarwady Delta and Tanintharyi coast (in the far south) are on the Andaman Sea.

There are also about 1,700 islands, many in the Myeik Archipelago, and 229,000 square kilometres of continental shelf with an enormous variety of marine ecosystems.

These iridescent reef structures are concentrated along the archipelagoes of the southern peninsula. These ecosystems are as diverse as they are delicate, but they have been little studied, said a recent report by the Ministry of Livestock, Fisheries and Rural Development. Nevertheless, researchers have observed obvious damage from water pollution and the devastating practice of “blast fishing”.

In common with Myanmar’s coral reefs, these marshy tidal forests along the coast hum with biodiversity, especially along the Thanintharyi coast. They were thickest near the mouths of the Ayeyarwady, but 92 percent of the delta’s mangroves have fallen to property development, logging and irrigation projects, and with them, Myanmar’s populations of species such as the saltwater crocodile.

Overfishing has pushed Ayeyarwady river dolphins to the brink of extinction in Myanmar. A study earlier this year by the Wildlife Conservation Society counted only 65 dolphins, although it was an increase from the previous year.

Tigers once ruled forests throughout the country, working their way into Myanmar culture, language and tradition. Now they have been banished to more or less two small areas: one in Kachin State and another in the southern peninsula along the Thai border.

Asian elephants were once abundant throughout the country, and in some respects they still are – Myanmar has one of the world’s biggest populations of captive elephants, most of them beasts of burden in the logging industry. Deforestation has shrunk their natural habitat, however, putting wild populations at risk.