YANGON — An embezzlement probe has been launched after nearly $100 million vanished from a fund set up by Myanmar’s gem companies, a trade body said Thursday, raising corruption fears in an industry notorious for its shady dealings.

Mining — especially for jade — was firmly in the hands of the military and their ‘crony’ elites during the final years of junta rule, but remains cloaked in secrecy despite reforms under a quasi-civilian government that came to power in 2011.

The fund, drawn from a one percent levy on profits from the multi-billion-dollar extractive trade, has $7.8 million left from a high of $104 million, according to the Myanmar Gems and Jewellery Entrepeneurs Association.

“But we don’t know anything (about the money). How was it managed and where did the money go?” association member Kyaw Kyaw Oo told reporters.

He did not say how many years the fund was collected for, name the contributors or speculate what has happened to the cash.

But he said a parliamentary commission is probing the whereabouts of the cash and will soon publish its findings.

The group, which includes major mining companies that dominate the country’s trade in jade, sapphires and rubies, say the fund was set up to help develop local gem markets and associations.

“The members are worried about mismanagement of the funds,” Kyaw Kyaw Oo said, adding the group hopes the country’s newly installed democratic government, presided over by Aung San Suu Kyi, will deliver transparency.

“We did not have any chance (for transparency) in the terms of the old government,” he added.

Last year corruption watchdog Global Witness said Myanmar’s jade industry alone was worth an estimated $31 billion in 2014, with most profits going to powerful military and ex-junta figures instead of the state coffers.

That estimated value would amount to almost half of the impoverished country’s GDP.

Large amounts of jade are sold to China through illegal mines and in rebel-held areas.

While the price of jade has slipped in recent months, poor migrant workers still risk their lives to comb unstable pits in northern Myanmar for valuable fragments.

Scores of people have died in recent months in landslides at open pits in Kachin State, which are also awash with drugs. 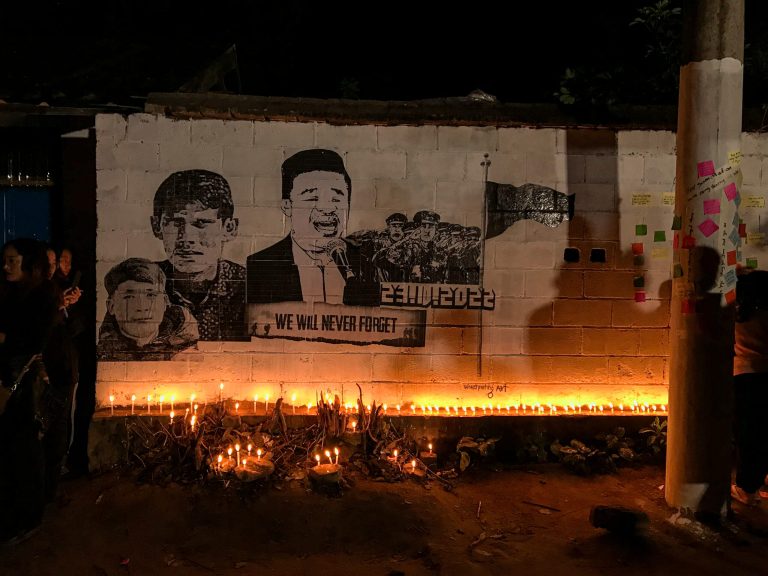 The military’s bombing of a concert near the jade mining hub of Hpakant has sowed widespread fear but also made the Kachin people more determined to liberate their homeland and achieve self-determination.
BY Emily Fishbein, Zau Myet Awng & Jaw Tu Hkawng