YANGON – A recent meeting between Muslim refugees and a delegation of Myanmar officials in Bangladesh was cut short when a discussion over repatriation conditions became heated, the minister leading the delegation said yesterday.

Dr Win Myat Aye, union minister for social welfare, relief and resettlement, told reporters in Yangon that leaders of the Muslim Rohingya community had put forward 13 demands at the meeting, held at a camp near Cox’s Bazar on April 11.

They became “aggressive” he said, at which point members of the delegation reassured them and stopped the discussion. This contradicts an earlier report by the Associated Press, which quoted a Rohingya leader saying discussions had continued, after “initial hiccups”.

The meeting was held during Myanmar’s first high-level visit to the refugee camps in Bangladesh, since violence resumed in northern Rakhine State last August, prompting more than 650,000 Muslims to flee.

Economist Dr Aung Tun Thet, who accompanied the delegation, said at yesterday’s press conference that Rohingya leaders had barely listened to the Myanmar side and had instead put forward their own agenda, which went beyond expectations. He did not elaborate.

Win Myat Aye said the refugees he spoke to wanted to return to Myanmar, adding that their main concern was citizenship. Refugees have previously told media and international organisations they do not want to return to Rakhine without guarantees of both citizenship and security.

While the UN and rights groups have said conditions in Myanmar are not yet conducive to a voluntary, dignified and sustainable return, Win Myat Aye reiterated the government’s earlier statement that it was ready to accept verified refugees.

Win Myat Aye said he told Muslim community leaders the government would speed up the process of issuing National Verification Cards (NVC) to returnees. The temporary documents are issued to those applying for citizenship pending a decision on their application. However, few Rohingya have applied for citizenship under the NVC programme because they do not trust the process.

When Win Myat Aye asked Rohingya leaders to accept the cards, they told him they didn’t need them, because they had documents that proved they came from Myanmar.

“He [Win Myat Aye] said, keep all those [documents] and listen to us,” a Rohingya living in Kutupalong camp told Frontier yesterday. He was not sure if the meeting had ended early, and Frontier was unable to independently verify this.

A Rohingya leader, Abdur Rahim, told the AP last week that the group became angry when Win Myat Aye said they must accept National Verification Cards, which state they are migrants from Bangladesh.

He confirmed to the AP that the group had presented 13 demands for the government to meet for their return to Myanmar. He also said at least eight rape victims were among the group and that they described their experiences to Win Myat Aye, who “listened to them patiently”.

In November, Myanmar agreed to take back around 750,000 refugees – overwhelmingly Muslims who identify as Rohingya ­– who have fled the country since October 2016. Dhaka has since provided biographical information on 8,000 refugees, of which Myanmar has approved 675 for repatriation. None of those on the list has yet returned, however.

Bangladesh has blamed Myanmar for the delays and has called for international assistance to expedite the process, in the hope of easing pressure on its increasingly strained resources. But Win Myat Aye laid the blame squarely on its neighbour. 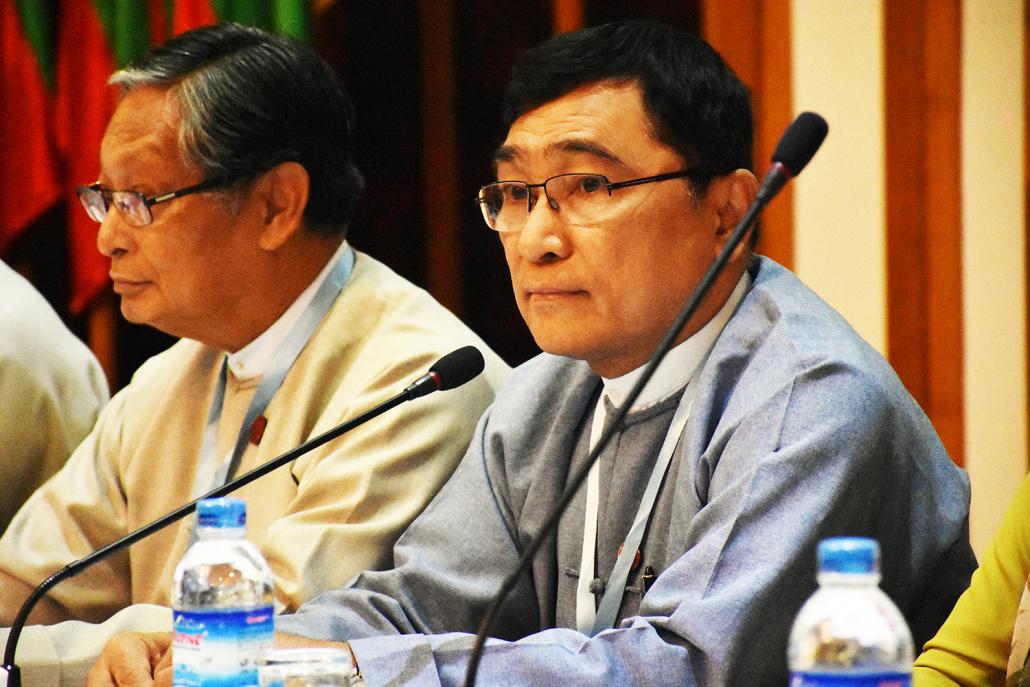 He said Myanmar supplied Bangladeshi authorities with forms for refugees to complete prior to repatriation but the completed forms returned to Myanmar lacked critical information, including fingerprints and photographs. Bangladesh authorities have agreed to collect the missing information, he said, and a Bangladesh-Myanmar coordination meeting will be held on April 30.

“When they sent the forms to us, they were very different [to what we had asked for], so we had a lot of difficulties,” he said. “We have asked them to resend as soon as possible.”

Win Myat Aye said he was surprised at how little information had been shared with refugees about the process, adding that many he spoke with did not know about the forms.

Others members of the delegation said yesterday that Bangladesh authorities had also refused them access to a camp for Hindu refugees.

Despite the difficulties of the trip, Win Myat Aye insisted that Myanmar wants to start repatriating refugees as soon as possible. “Because the monsoon is near, we are very worried for those in the camps,” he said. “They are in a very poor condition.”

Many are living in precarious shelters made of bamboo and tarpaulin, which aid agencies have warned may not survive the monsoon.

Myanmar has built two reception centres and a temporary camp, which state media said can accommodate 30,000 people. But rights groups have compared the camp to an open-air prison.

Aung Tun Thet said the government was ready to ensure returnees have accommodation and livelihoods. Neither he nor Win Myat Aye confirmed whether they would be allowed to resettle in their original villages.