A brief introduction to the Burmese royal legacy, from the ‘King of the World’ before the existence of Buddha, to the fall of Mandalay.

According to the royal chronicles, the first king of what became the Burmese Empire was Abhiyaza, an exiled Indian prince who founded a kingdom at Tagaung in 850 B.C.E—four centuries before the time of the Buddha Gautama.

Abhiyaza is said to be of the Sakya clan, the same as the Buddha himself, which according to Buddhist tradition makes him a descendent of Maha Sammata, the “King of the World”.

Abhiyaza’s dynasty is the golden thread through the history of Myanmar, but in some ways he is also Myanmar’s King Arthur of Camelot. Although many historians doubt the details of the Abhiyaza tale, arternalData=”pn=1&smchaeological evidence suggests that Bronze Age civilizations were building and cultivating near Tagaung (today north of Mandalay) and throughout the Ayeyarwady Basin.

In the first millennium AD the Ayeyarwady Valley was a trade thoroughfare between China and the Indian subcontinent, through which Theravada Buddhism began to spread in the  cities founded by the Pyu people, who had come from southern China, and the Mon in the south of what is today Myanmar.

The Pyu are largely regarded to have been simple people who dressed in sheepskin and enjoyed singing and drinking alcohol, according to chronicles from the Nanzhao Empire, which spent the eighth and ninth centuries controlling the Pyu.

The Nanzhao were a warlike people from present-day Yunnan who fought on horseback. Their language was an ancestor to modern Burmese. When their empire waned in the tenth century, their decedents pushed south and would eventually spawn their own kingdoms, including one at Pagan (now Bagan).

The next time you find yourself on Yangon’s Anawrahta Road (pronounced Anoiyatha), think of the medieval ruler of Pagan, marching a cavalry of horses and elephants across the Ayeyarwady Basin and the Shan Plateau. By the time of his death in 1077, Anawrahta had conquered much of modern-day Myanmar and forged an empire that stretched from the Malay Peninsula to the Himalayas.

The Pagan Dynasty lasted from 849 to 1297 and brought the famous pagodas of Bagan, which are today one of Myanmar’s most popular tourist destinations.

“It was a society of great creativity and energy, absorbing and transforming art and ideas from across the Indian subcontinent,” wrote historian U Thant Myint-U in his book The River of Lost Footsteps.

After two and a half centuries, the Mongol hoards of the descendants of Genghis Khan swept into the kingdom in 1277, then again in 1287. The dual invasions shattered the empire. Two centuries would pass before Myanmar would be unified again.

The royal barge on Yangon’s Kandawgyi Lake owes its existence to King Bayinnaung of the Taungoo Dynasty and the most prolific conqueror in Myanmar’s history.

In the first half of the 16th century, King Tabinshwehti of the small Burmese-speaking province of Taungoo began slowly conquering the remnants of the old Pagan empire. However, much of his work was almost undone when he succumbed to alcoholism and was subsequently assassinated by his own courtiers.

His general Bayinnaung seized control in 1551, and, with the help of Portuguese mercenaries, brutally re-forged the kingdom. Bayinnaung conquered not only Myanmar, but Thailand and Laos with his elephants, foreign soldiers and splendid teak warships—including a personal barge resembling the one in Kandawgyi Lake. 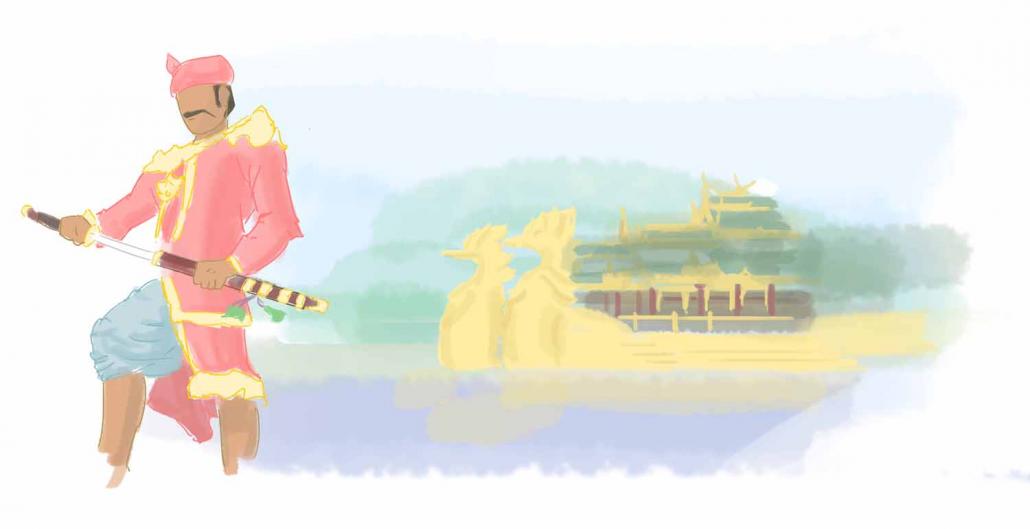 Bayinnaung’s empire unravelled when he died, but his grandsons would eventually restore the kingdom along boundaries similar to modern Myanmar’s. They also brought about cultural and administrative reforms, including a census by King Thalun in 1635, which put the population at around 2 million.

The Taungoo Empire entered a gradual decline and finally fell apart when the ancient Mon kingdom of Hanthawaddy re-emerged in Pegu (now Bago), pressed into the Taungoo heartland and sacked the capital city Ava in 1752.

Less than two decades later, a village headman from Shwebo, Sagaing Region, launched st the Mon. Their leader, who would christen himself King Alaungpaya, united the whole of Myanmar under the last Burmese dynasty.

The Konbaung Dynasty is most closely associated with Mandalay Palace. The city was established in 1859 by King Mindon, a mere generation before Myanmar fell to the British. Mandalay was the pinnacle of a 130-year cultural renaissance that resulted in lavish and complex royal ceremonies, an enormous royal family tree and the Hmannan Yazawin (or The Glass Palace Chronicle), a standardized history of Myanmar connecting Konbaung to the legendary King Abhiyaza and the Buddha himself. 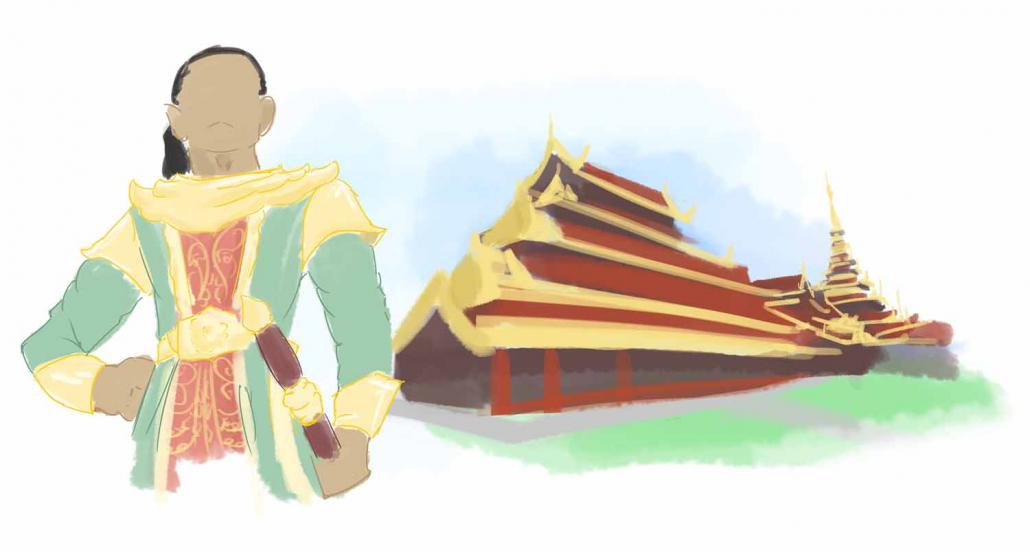 But the refined and dignified kingdom nudged against Western colonialism, resulting in three catastrophic wars with Britain, who looking to spread eastwards.

Although King Mindon tried to on Thibaw would cede his kingdom to the British Empire when British troops rolled into Mandalay in 1885 and ousted Thibaw and his famin Ratanagiri, India in 1916, where his body remains. After his death, his queen, Supayalat, was allowed to return. She died in 1925 and her mausoleum is located just south of the Shwedagon Pagoda.

In 1829, after the first disastrous defeat at the hands of the British, King Bagyidaw sought to legitimise the Myanmar monarchy. From his Palace of Mirrors in Inwa, he founded the Royal Historical Commission of Burma to produce a comprehensive history of the kingdom.

The scribes spent three years rifling through ancient inscriptions, monastic records, poetry and other sources to produce the Hmannan Maha Yazawin, dubbed The Glass Palace Chronicle when it was translated to English. It offers a royal narrative stretching back to the legendary King Abhiyaza of the Sakya clan—the clan of the Buddha himself.

Although King Thibaw never returned to his homeland, his descendants did. His surviving grandchildren are Princess Hteik Su Phaya Gyi and Prince Taw Phaya. According to the chronicles, they are the descendants of Abhizaya of the clan of the Buddha, descended from Maha Sammata, the “first king of the world.”

They live quietly in Yangon.

The Seats of Kings

Bagan and Mandalay are the most famous royal capitals of old, but they aren’t the only modern cities Myanmar’s ancient monarchs once called home. 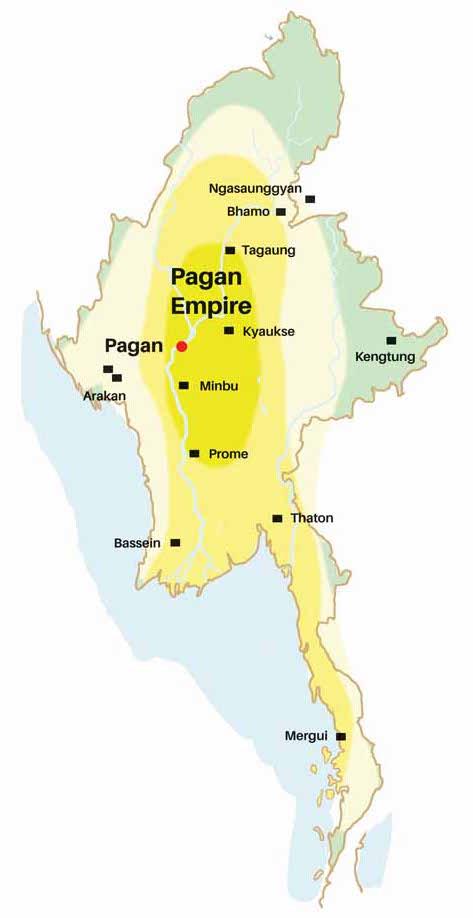 Tagaung The first kingdom of Myanmar, according to legend, founded by Abhiyaza in 850 B.C.E. Although some doubt the Abhiyaza story, Tagaung has always been a symbolic capital.

Bagan (Pagan) The seat of the first empire foraged by King Anawratha in the eleventh century and home to thousands of pagodas built under the Pagan Empire.

Taungoo Taungoo a modest principality of the Ava Kingdom that broke away and conquered the whole of Myanmar. It was the seat of the Taungoo Empire before they moved to Ava.

Inwa (Ava) Inwa, just south of modern Mandalay, was the seat of the proud kingdom of Ava after the fall of Pagan in the 13th century. The Taungoo Empire made Inwa their capital, and it twice hosted the Konbaung Dynasty before they moved to Mandalay.

Bago (Pegu) Taungoo Empire made Bago its capital first in 1539 and again in 1613 as a staging ground for southern conquests. When Taungoo fell, it became the seat of the restored Mon kingdom of Haribhunjaya.

Mandalay Although it is emblematic of Myanmar’s royal legacy, King Mindon established Mandalay in 1857, a mere generation before the British conquest of Myanmar.