Movable asset lending is the future

SMALL AND MEDIUM enterprises play a central role in Myanmar’s economy, contributing to job creation and gross domestic product. About 90 percent of businesses are considered SMEs.

Yet, this sector is in urgent need of financing to grow and create more employment opportunities. This lack of financing affects Myanmar’s key sub-sectors including manufacturing, retail, and services.

When the World Bank Group conducted its Myanmar Enterprise Survey 2014, almost 23 percent of small, medium, and large firms listed access to finance as the top constraint. This can be attributed to the fact that most SMEs in Myanmar do not have immovable collaterals – land and buildings – that are acceptable to lenders.

Unavailability of collateral is frequently not the problem; rather, it is the inability to use valuable assets as collateral. In the developing world, 78 percent of the capital stock of a business enterprise is typically in movable assets such as machinery, equipment, or receivables – only 22 percent is in immovable property.

However, financial institutions are reluctant to accept movable property as collateral. In Myanmar, for example, around 90 percent of total outstanding loans are against immovable assets such as real estate.

In contrast, the share of commercial credit involving movable assets relative to total outstanding loans is believed to be just 1 percent. Most of these are secured with gold and jewelry, with some limited use of other assets such as motor vehicles, warehouse goods, and accounts receivable. As a result, the economic potential of movable assets for the growth of the country’s economy is not being fully realized.

The preference for immoveable assets as collateral not only restricts access to financing; it increases concentration risk in the banking sector. The 1997 Asian Financial Crisis is an example that underlines the vulnerability of financial systems that are not diversified.

Limitation in types of collateral also constrains the credit market expansion. Thus, the ratio of credit to private sector to GDP is very low in Myanmar, at 22 percent – the second lowest within ASEAN, ahead of only Laos. 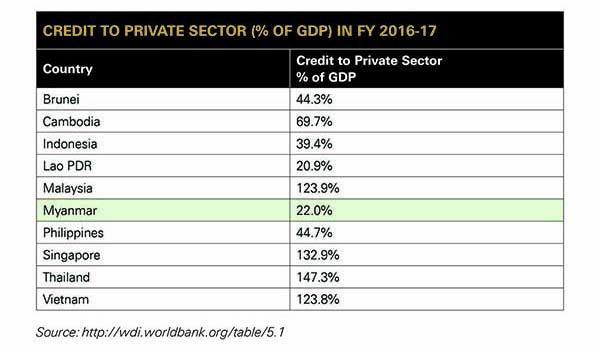 A secured transactions framework that allows businesses, especially micro, small, and medium enterprises, to access finance by offering movable assets as collateral is the road ahead for Myanmar. In fact, it is critical financial infrastructure for any economy, and has the potential to unlock significant financing for SMEs.

The frameworks required to allow and encourage the use of movable assets as collateral for loans include a Secured Transactions Law, a Collateral Registry, and developing movables lending capacities.

This is where IFC, a member of the World Bank Group, has been playing a significant role in Myanmar since 2016, by advising the government and helping the nation work towards a well-designed secured transactions system.

Secured transactions laws and collateral registries have the potential to significantly boost the country’s economic development. One of the reasons why movable assets are not accepted as collaterals in many countries is because there are no relevant laws or registries to track them. Registries reduce the risk of potential loss for lenders, and make it easier for borrowers to use assets they already have as collateral – for example, it allows a farmer to pledge his cows as collateral for a tractor loan.

Economic analysis suggests that small and medium businesses in countries that have stronger secured transactions laws and registries have greater access to credit, better ratings of financial system stability, lower rates of non-performing loans and a lower cost of credit. The end result is higher productivity and more growth.

In China, secured transactions reform cumulatively facilitated US$3.58 trillion accounts receivable financing, of which $1.09 trillion went to SMEs. As a result of the reform the total number of commercial loans involving movable assets grew by 21 percent per year between 2008 and 2010, after being flat from 2006 to 2008. Since October 2007, when the registry commenced operations, over 1.7 million registrations have been recorded for accounts receivable finance and financial leases alone.

Similar reform in Vietnam has resulted in 1.5 million registrations since 2012, facilitating $69.3 billion in financing for about 800,000 SMEs and 50,000 micro businesses.

Drawing from IFC’s experiences in around 50 countries, it is clear that effective secured transactions laws are a crucial component of a healthy financial sector and business climate. For Myanmar, this will be the foundation to enable more financing for SMEs, farmers, traders and infrastructure operators.

Going ahead, the secured transactions reform will help develop Myanmar’s credit market, and subsequently create a modern secured financing system that will promote a robust, efficient and inclusive financial sector.