Among the small but growing ranks of women taxi drivers in Yangon there’s at least two who are tough, fiercely independent, and doting mothers.

If ever she is assaulted by a client while driving her taxi at night, Ma Su Mon Kyaw has a plan: Ram her cab straight into the nearest car. “Like that!” she said, smacking her own palm. “To draw attention for help.”

Fortunately, Su Mon Kyaw has not had to enact her contingency plan in her four years as one of Yangon’s only female taxi drivers, but if she has to, she isn’t afraid. Her trade might be a man’s job, but the city, she said, belongs to her. “I know every street, every township,” she boasts. “I am not afraid.”

When Su Mon Kyaw started, there were almost no other females in the traditionally, or stereotypically, male trade. Their ranks have swelled with the general increase in the number of cars on the road, but not by much.

Su Mon Kyaw said the Yangon City Development Committee has officially registered only 35 female drivers (though the actual number is probably a bit higher), hidden away among the thousands of taxis with men behind the wheel. She said the women mostly kept their heads down, although she has plans to eventually form an association to offer support and resources to female cabbies and help undo the trade’s male-only image.

“We might all have a uniform cab colour, green or blue, so that women passengers can know it is another woman driving,” she said, answering my questions while patrolling for customers in Ahlone Township.

She picked up a customer during the interview, a woman. The passenger said she had never seen a female taxi driver before, but it was a refreshing experience. She said she loved the idea of colour-coded female taxis, if only to have an alternative to shutting herself in with a strange man every time she needed to go somewhere quickly.

The reactions she mainly receives these days – surprised, impressed, and generally accepting – are a far cry from the responses from passengers during Su Mon Kyaw’s first months as a driver. They were often shocked or worried for her safety, demanding to know what a delicate creature was doing behind the wheel. 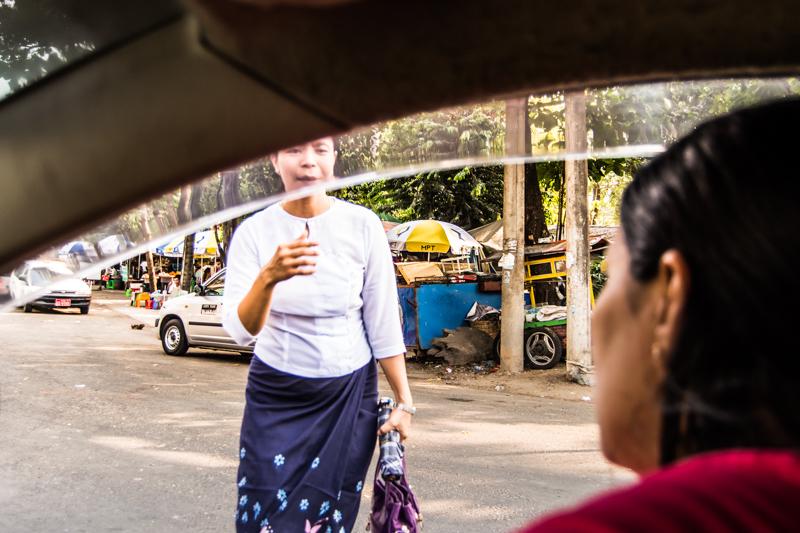 Ma Nayzar Khaing, who has been driving a taxi for six months, believes women are becoming more accepted among their colleagues as well. She was nervous when she bought her taxi and hit the street, but when other drivers saw her they would pull up alongside and, “give a thumbs-up, like it was really cool that I was doing this,” Nayzar Khaing said. “That gave me a lot of confidence to continue.”

Confidence, she argued, is often in short supply for women discouraged from making their own way in the world. Nayzar Khaing, who works to support her three children, owned a small teashop before saving enough to buy a car, which she used for private deliveries before acquiring a taxi licence.

“Women should be able to drive, and if they have to walk, they should have strong feet. They shouldn’t have to rely on other people,” she said.

Some effects are obvious: Although she loves the freedom to cruise anywhere and everywhere in the city, unlike Su Mon Kyaw, she never drives after dark.

Some are more subtle, like the small TV screen she installed to distract male passengers who are either nervous about her driving skills or feel awkward being alone in a car with a woman.

Her female passengers talk to her more easily, she said, but sometimes even that familiarity becomes uncomfortable. She said one wealthy passenger spent the whole ride talking about the trials of hiring a decent nanny.

Su Mon Kyaw can’t afford a nanny for her own children; instead she has to sit in traffic all day, her arms deep brown from hours in the sun.

But she said driving a taxi isn’t just about money, it’s about making her own way in the world. Though she has a husband, she doesn’t rely on him for money, nor her parents, nor some factory boss.

“I think all women want to work… There might not be some who are able to at the moment, but every woman wants to work. And I think it’s important that they do work. There are a lot of jobs out there, they just have to know where to look.”

She said her children’s birthdays are her favourite days. Before, she could only celebrate with what little money she was given.

“Now whatever they want to do, I am the one who provides it, nobody else,” she said. “That gives me the strength to go on.” 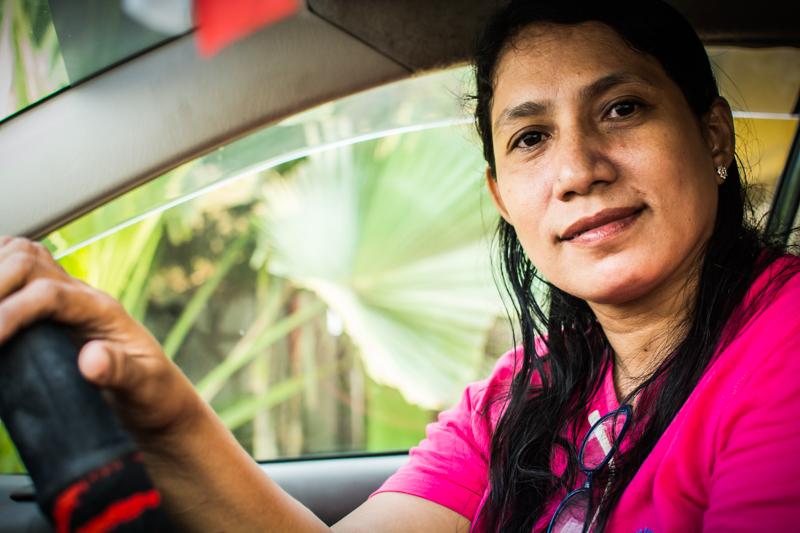 Mothers of the road

Su Mon Kyaw agrees. She also earns money as a driving instructor and real estate agent, all of which give her the flexibility to take care of her daughter. “My car is my office,” she said.

But beyond personal empowerment: “The whole world needs more women drivers,” she said.

Women are more cautious, she argued, and don’t drink on the job. She has ten fellow drivers on board for her planned female cabby association, which she hopes will someday pepper Yangon traffic with blue or green taxis with women behind the wheel.

Whether or not women really make better drivers, their reputation has an effect. Su Mon Kyaw’s passenger wrote down her phone number before paying. She said female clients often do this, and even the men take her number to give to their wives. They keep it tucked away in their contacts lists, confident that when they find themselves caught out at night, alone on the men’s streets, a blue van is out there somewhere with Su Mon Kyaw at the wheel.