Money on the move

A growing number of mobile money operators are racing to sign up agents, but the lack of interoperability between the different brands has raised concerns about the industry’s future growth.

THE FRONT DOOR of Ko Aung San Thwin’s small mobile phone shop in Yangon’s Hlaing Township features a dozen posters. Most are for mobile money services that didn’t exist just a couple of years ago.

Aung San Thwin is an agent for multiple mobile money providers – Wave Money, TrueMoney and M-Pitesan are some of the most popular – that enable users to deposit, withdraw and transfer cash through an agent rather than a bricks-and-mortar bank.

Although cash is still king in Myanmar, Aung San Thwin is one of many who sees huge growth potential in mobile money, particularly given that only 10 percent of the population has a bank account. In this densely populated, middle class area of Yangon, he says many are already taking advantage of the convenience of mobile money, and he now makes around 200 transfers a month.

“People don’t want to go to the bank to transfer a small amount of money. It’s so much hassle,” he said. “People use banks just for transferring large amounts of money … [in the future] I think I can make money working as [a mobile money] agent.”

Another agent in Hlaing Township said mobile money providers that enable customers to buy phone credit or pay bills were also popular because they saved time.

Ma Saw Mya Kyi and her husband have been operating their store for almost a decade, selling everything from nails to diesel generators.

She was first introduced to mobile money through Red Dot, a mobile payment service that launched in January 2015 offering top-up credit and is available in 16,000 stores nationally.

“Wave Money is mainly used for transactions inside the country while [migrant] workers often use TrueMoney to send back money from Thailand,” she said.

A key battle in the mobile money sector is playing out between the mobile operators, particularly Telenor and Ooredoo. After three years of scrapping for phone users, they are increasingly turning their attention to leveraging their networks to capture a piece of the financial sector pie.

Myanmar has two licensing procedures for mobile money. One enables companies to partner with licensed banks, like the TrueMoney tie-up with AGD. Those that want to go it alone can apply for a mobile financial services licence. To date, three of these have been issued, to Wave Money, M-Pitesan and OK Dollar. 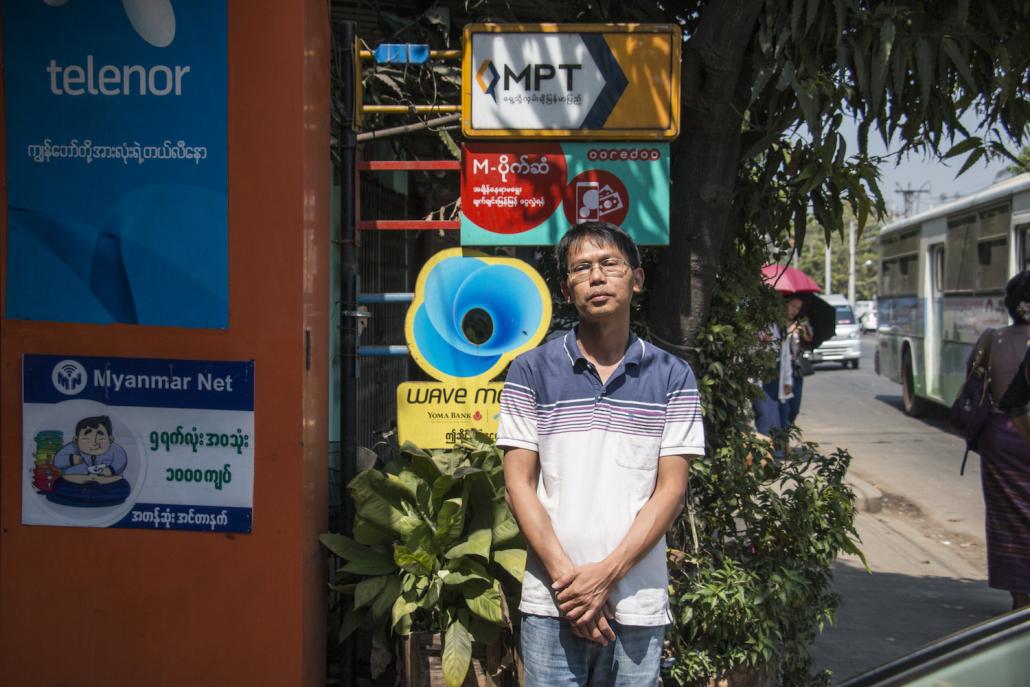 Wave Money is 51-percent owned by Telenor and licensed in September 2016, while M-Pitesan is owned by Ooredoo and received its licence in July 2017. With agent networks considered crucial to winning the mobile money war, the two foreign-owned mobile operators are working hard to sign up new agents.

Wave Money’s head of product and digital Mr Stephen Swan said the company had about 15,000 agents and the service was available in most parts of the country.

When Singapore-listed Yoma Strategic Holdings announced it had bought a 34 percent stake in Wave Money from First Myanmar Investment for US$19.4 million in early March, it was revealed that Wave Money had experienced monthly revenue growth of 22 percent from January 2017 to January 2018, while transfer volumes had grown 30 percent a month over the same period. Although not profitable yet, it expects to turn a profit in the next few months and the acquisition was welcomed by analysts.

But it’s far from a one-horse race. Mr Jacques Voogt, chief m-commerce officer at Ooredoo, told Frontier in early February that M-Pitesan had signed up 5,000 agents in its first four months and expects to have 10,000 by the middle of the year. It’s also partnered with Red Dot so that the company’s terminals can be used to access M-Pitesan.

‘The most important thing with mobile money service is kosaleh,” Voogt said, using the Myanmar-langauge word for “agent”.

She said that once it launches the service would be available at 86,000 MPT “point of sales” across the country. “Within [a] few weeks, we are starting a soft-launch. Soon after [we will] follow with commercial plan,” she said on February 7.

Industry players who gathered in Yangon for the Mobile Money & Agent Banking Summit were upbeat about the prospects for mobile money in Myanmar. The recent sale of a stake in Wave Money, valuing the company at almost $60 million, also highlights the growth potential.

“Myanmar is one such market with great potential to benefit from the growth and evolution of mobile financial services,” he told Frontier. “That means the opportunity for empowering the unbanked is great.”

But there are a number of key challenges, particularly the lack of interoperability between mobile money providers. That means it’s presently not possible to send money from an M-Pitesan account to an OK Dollar account, or from Wave Money to TrueMoney. The mobile operators are an example of interoperability: it’s possible to call a Teleno SIM using MPT, for example. Banks are also interoperable, in that you can transfer money from a KBZ account to a CB Bank account. 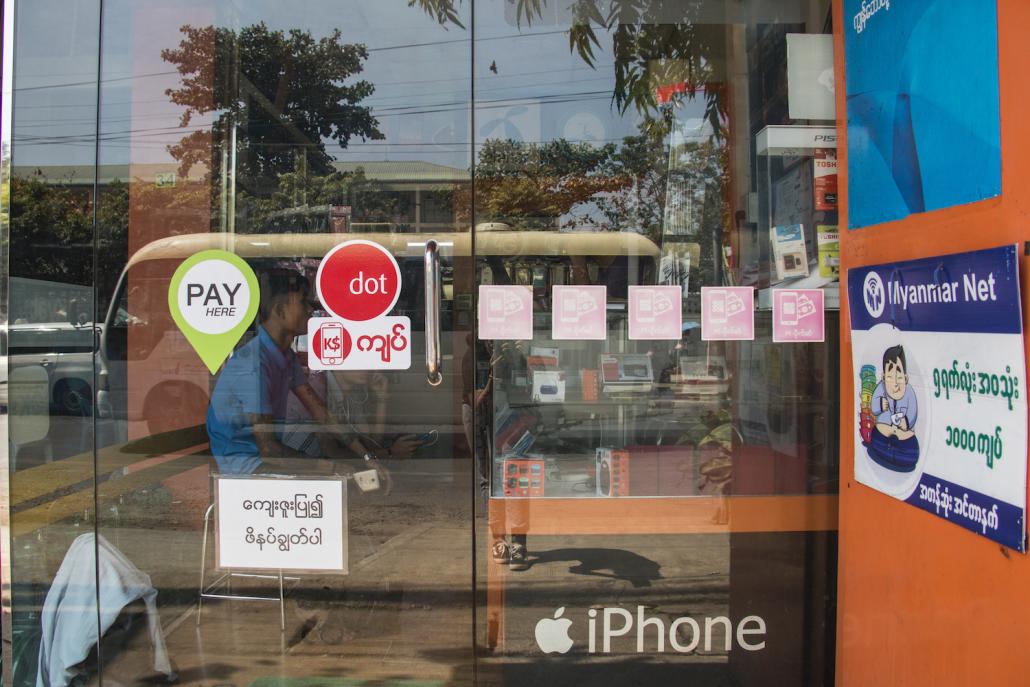 Many speakers at the mobile money summit warned that this lack of interoperability could limit the growth potential of mobile money in Myanmar.

“Mobile money interoperability is the most basic need for operators’ effort in expanding the network of service,” said Ho from Amdocs.

In an interview with Frontier last December, U Aung Kyaw Moe, the founder and CEO of Singapore-based payment service provider 2C2P, made a similar point.

“What the mobile money operators are doing now is building their empire, not [working] for financial inclusion,” said Aung Kyaw Moe, whose company launched 1-STOP, an e-commerce network of buyers and sellers in Myanmar, in January 2016.

While Voogt from M-Pitesan acknowledged it was an issue, he said it was one that could be addressed later.

“It’s one of several key factors. But what we have to do [first] is expand our agent network and overcome the trust issue,” he said.

He said an important factor in network expansion was ensuring that agents didn’t give up on the service because they weren’t making money.

“If [the agent] doesn’t see people coming in and ask M-Pitesan, and he stops making money, he will quickly get out of the business,” he said. “So for all operators, the most important is building agent network and keep them in the business.”

Voogt said the most difficult issue that mobile money service providers had to overcome was trust. This was particularly an issue when signing up agents, because they are required to put money into an e-wallet and keep it there. Without money in their account, they won’t be able to service customers who do not have their own account.

“Especially in Myanmar, there is a big trust issue that we mobile money operators have to overcome. People have been familiar with cash for their whole life. They know how to use cash. But the agents and customers will still doubt it is safe to put money over the phone,” said Voogt.

“So any places we fight each other, as mobile money providers, it is for the cash and agents.”

For Saw Mya Kyi and her husband, trust is indeed an issue. The couple has been approached by many mobile money operators to act as agents and carefully considered which services to partner with. For example, they refused to offer the OK Dollar service because it was not associated with a bank or a mobile operator.

“TrueMoney and Wave Money are backed by AGD Bank and Yoma Bank respectively,” she said. “So it seems no problem for us [to partner with them].”