But the outcome of the second 21st Century Panglong Union Peace Conference was similarly mixed – there was disagreement over the right to “secede” from the Union, but also consensus among official participants over many other points.

The coming weeks are likely to see significant debate as to whether the six-day conference, which opened on May 24, was a step forward. For now, it depends on who you ask.

Despite the state counsellor’s initial optimism, things didn’t get off to the best of starts. On May 24, the opening day of the conference, the United Nationalities Federal Council, a bloc of ethnic armed groups, released a statement saying its members would not be attending because they would not have the right to participate fully in the conference.

The stock of the UNFC appears to have fallen suddenly, after some former members – most notably the Kachin Independence Army – chose to align themselves with the United Wa State Army in a bloc that is rejecting the NCA and demanding new talks. 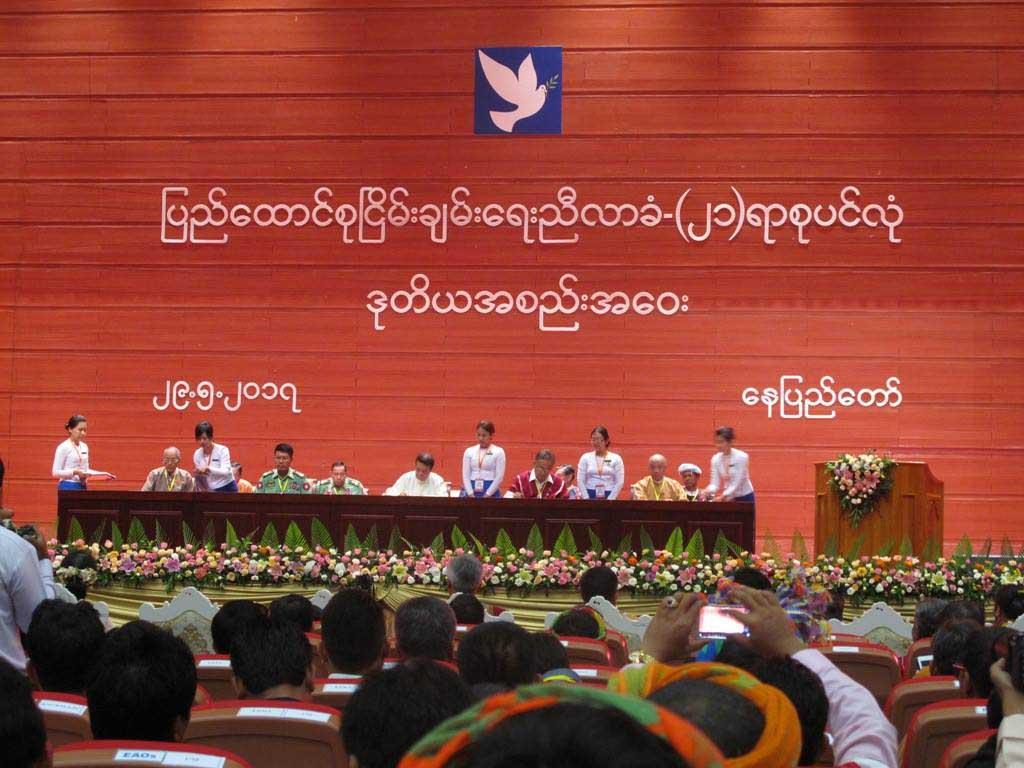 Members of the Union Peace Dialogue Joint Committee sign an agreement on May 29, the final day of the conference. (Nyan Hlaing Lynn | Frontier)

In her speech Aung San Suu Kyi said the country was now ready to begin a discussion about what a federal Myanmar would look like. But she also made it clear, as she has done many times before, that the responsibility of ending more than seven decades of fighting lies not only with her government, or the military, but with the entire population.

Admitting the peace process under her watch had “experienced many highs and lows, progression and regression” she expressed a wish that 2017 would be the “Year of Peace”.

It will be no easy task. Stepping onto stage after her was Commander-in-Chief Senior General Min Aung Hlaing. After opening in a relatively conciliatory tone, he then made clear that the Tatmadaw stands fully behind the NCA and will not accept any other paths to peace and political negotiations.

“Ignoring and pursuing other or the second way will be [seen as] an attempt to loathe the establishment of a Union based on peace, democracy and federalism. As such, we have to assume that the attempt is tantamount to grabbing power and splitting from the Union through armed struggle,” he said.

After the opening speeches and photo opportunities, the media was excluded from most of the action, with negotiations taking place behind closed doors. Reporters did their best to piece together what was going on through short interviews with attendees.

On a few rare occasions there was a genuine rush of excitement in the media centre, such as when, late on the first day, representatives from the new ethnic bloc, the FPNCC, were said to be hosting a press conference at their hotel. 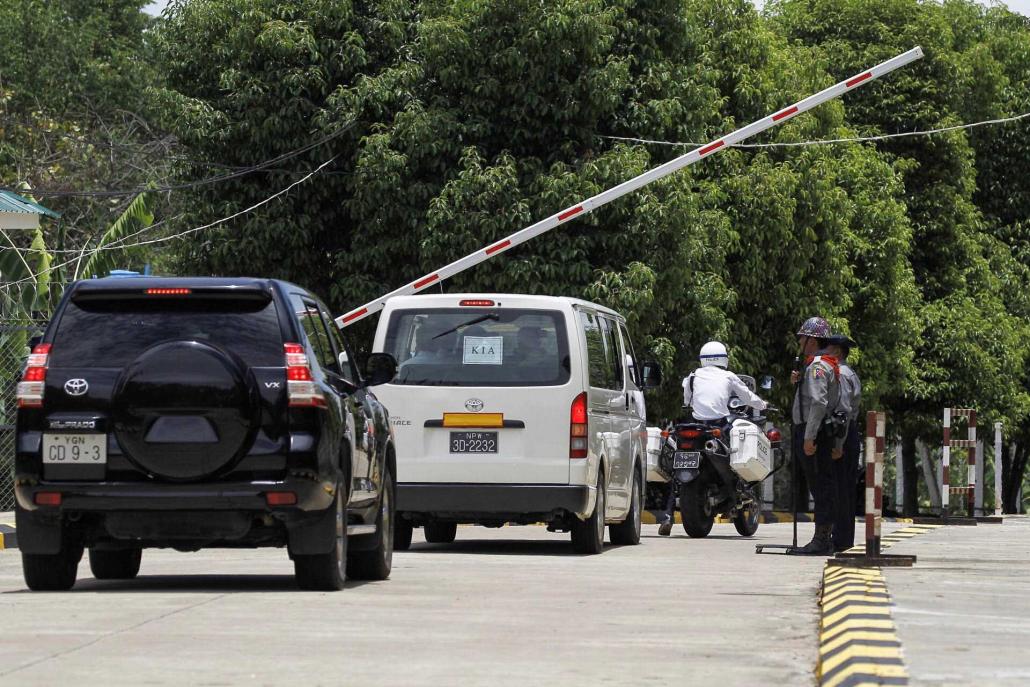 The media cohort got into their respective vehicles and sped over to the hotel, only to be disappointed; the “press conference” was in fact a member of one of the ethnic armed groups complaining that he had been given the incorrect accreditation to attend the event. The press pack, dejected that there was to be no story there, returned to the convention centre.

The same rumblings of an FPNCC press conference filtered around the press centre the following day, and slightly more apprehensively the journalists made their way back to the hotel. After waiting for some time in the hotel lobby, U Kyauk Kaw Ann, chief of external affairs of the UWSA, emerged from a room to inform them that after a successful meeting with members of the government’s negotiating team, and with input from the Chinese embassy in Myanmar, FPNCC representatives would meet Aung San Suu Kyi the following day, on May 26.

There were in fact two meetings, both at Aung San Suu Kyi’s Nay Pyi Taw residence. The first was with the UWSA, KIA, SSPP and NDAA; the second with the MNDAA, AA and TNLA.

Speaking after these meetings, Kyauk Kaw Ann said they had been a friendly “first step” and that no serious matters related to the peace process had been discussed. He added that the FPNCC was still sticking by its policy of rejecting the NCA in favour of a new process.

Major Tar Pan La, from the TNLA, praised the meeting as “breaking the deadlock” and expressed gratitude that a “channel from the government side has opened”.

“We expect [the dialogue] to continue,” he said. “Today we met each other to build confidence.”

But back in the confines of the convention centre, there was frustration from some attendees about the lack of inclusion in discussions, especially from civil society groups.

On May 25, the second day of the conference, political analyst U Min Zin told Frontier that a measure of its success would be whether at least one new ethnic armed group signs the NCA or a deed of commitment. But with the withdrawal of the UNFC, whose members include the Karenni National Progressive Party and the New Mon State Party – both tipped as the most likely to sign the accord – that prospect already appeared off the table.

“In terms of nation building, many people are not happy with the way discussions are being held at the conference. So we are not sure if those who have joined would be willing to sign any type of document,” he said. 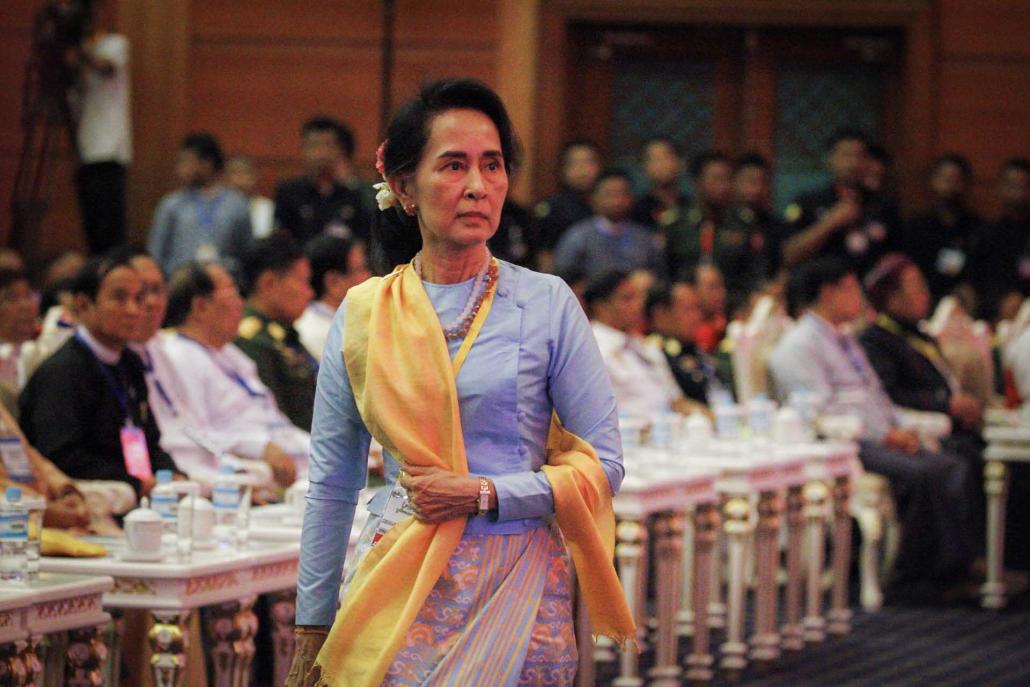 Mi Kun Chan Non, chairperson of the Alliance for Gender Inclusion in the Peace Process, who attended the conference as an official observer – not a participant – called for greater involvement from civil society groups in future conferences.

“Civil society has a key role to play; not as a decision maker, we know that, but regarding the discussion process,” she told Frontier on the morning of May 26, as the conference attendants poured through the towering doors of MICC-2.

“Civil society is working with people at the grassroots level, and hearing the voices about the views towards the peace process. So, we really feel it is important to get any connection from the voice of the grassroots and bring them to the top.”

The issue of secession

There was some progress and some stumbling blocks when participants discussed the 45 points that had been pre-approved by the Union Peace Dialogue Joint Committee, a body comprising representatives of the government, parliament, political parties, military and ethnic armed groups that have signed the ceasefire.

Of the 45 points, 37 were agreed upon. This was done through consensus, rather than voting. These accepted points included a Union based on democracy and federalism, with the right to self-determination; no ethnic races to be given special privileges; and states and regions to write their own constitutions and laws in accordance with the 2008 constitution.

Some of the points that were not agreed upon will instead be discussed at the next conference, a date for which has not yet been set.

One of the major areas of contention related to secession from the union.

U Sai Kyaw Nyunt, a secretary member of the UPDJC and associate secretary of the Shan Nationalities League for Democracy, said he agreed that the issue should not be submitted to the final day’s session, held on May 29.

“Our three main national causes are included in the NCA. Non-disintegration of the union is included in that. But this term – no right to secede from the Union – is very disputable,” he told Frontier. He said that a similar dispute over the term had prompted General Ne Win’s 1962 coup. “So, we proposed that it’s better if we don’t discuss it.

“When building up the Union, it can’t be built with words, but with the feelings inside your heart,” he said.

Dr Aye Maung, chair of the Arakan National Party and a member of the UPDJC, agreed that the term should not be used in discussions.

“The term ‘must not secede’ sounds like an order. It is a paragraph in the 2008 constitution. It actually should be forgotten and not included,” he said, adding that his party was calling for self-administration and autonomy, which is “more unifying and appropriate” than secession.

Dr Salai Lian Hmung Sakhong, vice president of the Chin National Front and a member of the UPDJC, said it would be important to get more input from the public before the next conference. He suggested that the national-level political dialogue meetings should take place in all states and regions ahead of the next meeting.

“When making important historical decisions, it is difficult for us to do it without the will of the people,” he said. “Nobody wants disintegration. Nobody is asking for secession. However, during the crucial matters I see that it would be stronger to [make decisions] with people’s opinions rather than the opinion of a group of people or a leader.”