Min Zin: ‘It is essential that the democratic transition not be derailed’

The landmark 21st Century Panglong Union Peace Conference that concluded in Nay Pyi Taw on September 3 was hailed as a major step forward towards ending decades of civil conflict.

Although the conference was rich with symbolism and did not achieve any breakthroughs, it provided a welcome opportunity for the delegates, including representatives of almost of the nation’s ethnic armed groups, to present policy statements articulating their views on the peace process.

Issues raised at the event will be the focus of a series of meetings by various committees and groups before the next Panglong 21st Century conference convenes early next year.

Frontier discussed the conference with U Min Zin, executive director of the Institute for Strategy and Policy Myanmar, who presented a paper on political and security issues at the event.

How effective was the conference in contributing towards the peace process?

The conference was able to attract ethnic armed groups such as the United Nationalities Federal Council. The Kachin Independence Organisation also said that it attended the conference in honour of the new government and Daw Aung San Suu Kyi. This has significance for both sides.

But the Ta’ang National Liberation Army, Myanmar National Democratic Alliance Army and Arakan Army had no opportunity to attend the conference. The conference would have been more important symbolically if they had attended. The departure of the Wa delegation after one day was an unfortunate incident that could have been avoided.

Had the conference been held in line with the terms of the Nationwide Ceasefire Agreement [signed by eight armed ethnic groups in October last year], it could not have been all-inclusive and only signatories could have participated. The decision to relax the terms of the NCA to allow greater participation was significant. 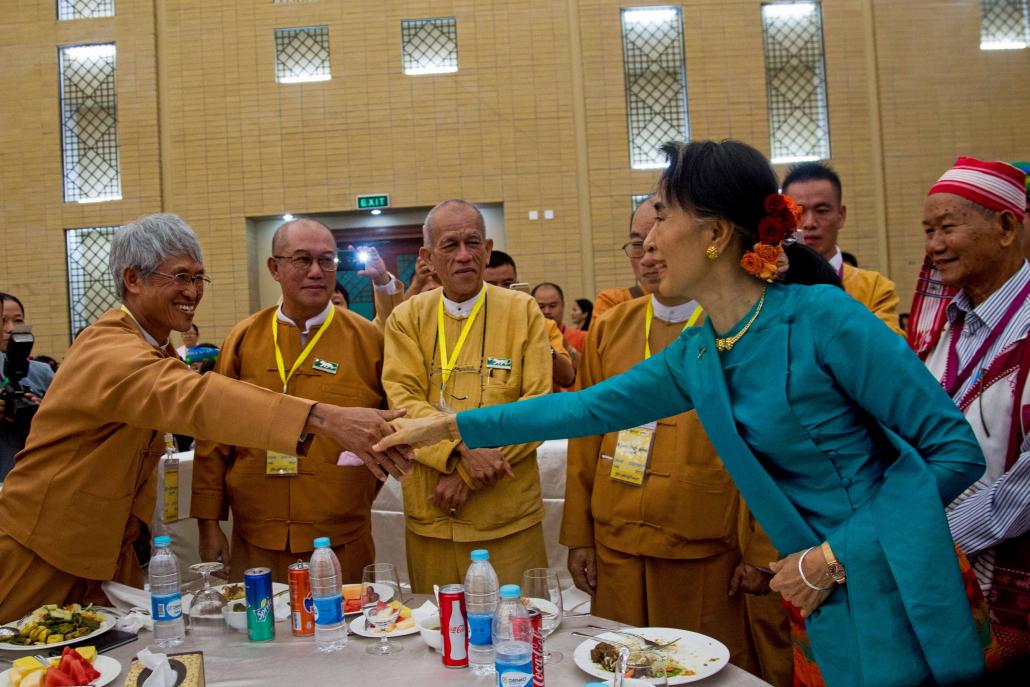 The conference has two objectives: one is to solve conflict and the other is to create a new federal state. Armed groups, non-armed groups, political parties, the Tatmadaw, the government, and civil society organisations all need to be involved in building a federal state.

It will be difficult to bring an end to conflict if all the main actors are not included in the peace process. If the move to end conflict is not successful, the building of a new federal state will not be successful. The main necessity for ending conflict is a ceasefire.

The AA, TNLA and MNDAA did not attend because they could not reach an agreement with the Tatmadaw. They were negotiating to participate, but disagreed over wording – the usage of the term “armed struggle”. These are just words, but what does the disagreement tell us about the lack of trust between these groups?

The main cause of the decades-old civil wars is the problem of a lack of mutual trust, which stems from the failure to build a federal state. In terms of trust, recognition is very important.

For example, ethnic armed groups have stated that their armed policy is a revolution for the rights of their ethnic people. It is their position. If you don’t recognise it, if you instruct them to renounce their armed struggle, they will not like what you say. They may see renouncing armed struggle as a kind of surrender. It might be a problem of prestige for them.

The Tatmadaw has maintained that these three groups [the AA, TNLA and MNDAA] must renounce their armed struggle … The Wa delegation’s walkout from the conference also stems from the issue of recognition. 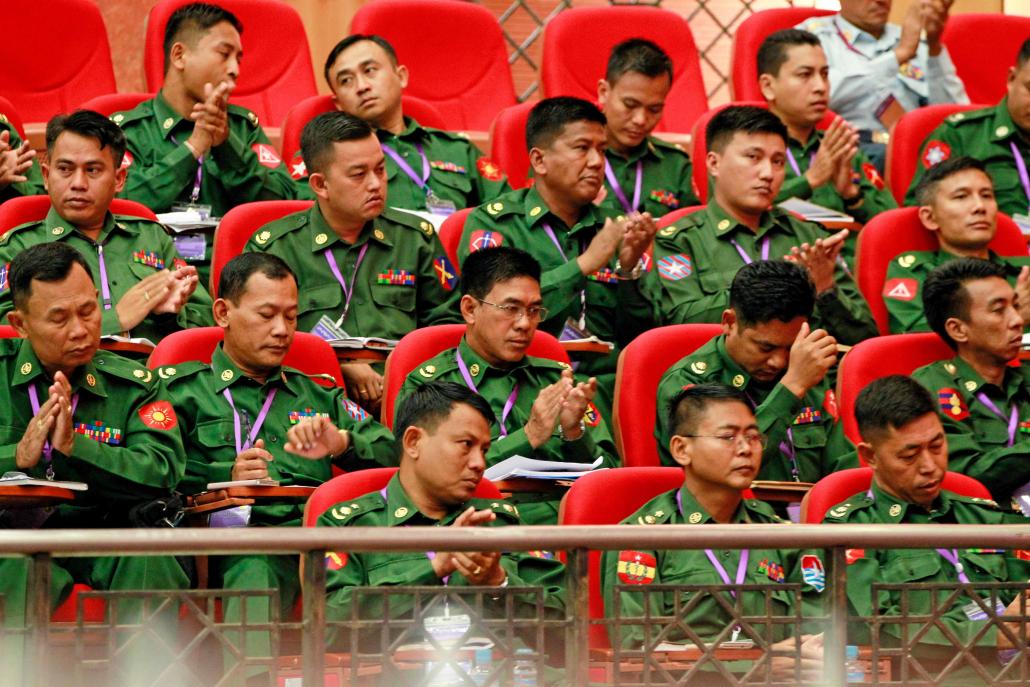 Recognition is very important. You can see it in their statements. Those who read out policies at the conference emphasised the importance of being recognised. So, if the titles of ethnic armed group leaders are not stated, it means they are not being recognised. Ethnic people also said Bamar people tend to call [ethnic minority] names wrongly on the stage. These issues can have bad consequences.

Sometimes recognition is connected with history. You might be right generally if you say it’s important to let go of the past. But if you look carefully at the conflicts, you can’t remove the past completely. Unless they [ethnic leaders] feel recognised and equal, they will hold onto the past.

If you want to escape from the past, firstly you must recognise others. It is sensitive but important.

Why do you think the Tatmadaw has opposed the participation of some ethnic armed groups, such as the Myanmar National Democratic Alliance Army, Ta’ang National Liberation Army and Arakan Army?

This is the Tatmadaw’s historical position. So it is difficult. Both sides need to meet as many times as possible to build trust. It is like the term “federal” in the paper I presented at the conference. It was a taboo word in the past.  Now we can use it. Opinions may differ but at least we can openly talk about it.

As you say, we can now use the term ‘federal’ openly. We can present different opinions on the topic. But it’s also noticeable that the commander-in-chief in his opening speech did not say ‘federal’. The Tatmadaw has the ultimate say on the constitution, so does this suggest we are still at the starting point in terms of a negotiated solution to the conflicts?

Maybe it is the starting point. But to be fair, the fact that such a hugely significant conference was able to be held was because of the burning desire of the Tatmadaw and ethnic armed groups.

It is not easy for those who have been fighting each other to sit face to face and express their feelings. So the conference is a good starting point. Whether that progress can be sustained will depend on the next discussions. Sometimes essence is important and sometimes form.

The policy statements presented at the conference have informed the public about the opinions of ethnic armed groups and other organisations involved in the peace process. What needs to be done to ensure the peace process is effective in the future?

Daw Aung San Suu Kyi said that the people have as much right to listen to [broadcasts of] the stakeholders at the conference as the participants themselves. On the other hand, to resolve the problems of race, recognition and religion you need to have an understanding of history and a high level of education … The public will also not feel tolerant if they are struggling to get food, shelter and clothing.

Including people in the process without considering their calibre may be counterproductive sometimes, I think.

What needs to be done to ensure that the national political discussions that are to follow the conference are conducted successfully?

In the past we regarded the military government as the common enemy. But now the Tatmadaw is working in collaboration with the National League for Democracy government on the peace process.

Some of what the NLD government has said is not too different from the Tatmadaw. It was remarkable that Senior General Min Aung Hlaing went to Daw Suu’s house on Martyrs’ Day. This was the first visit to the house by a Tatmadaw commander-in-chief since the funeral of General Aung San’s wife, Daw Khin Kyi, in 1989. This is a good development.

There was a common enemy in the past. Now it’s disappeared. People are blaming each other. Anyone who criticises the NLD government is blamed. Disunity becomes deeper.

In the past there was no such disunity among the people, even if they were dissatisfied with each other, because there was a common enemy. But the influence of the military authoritarian system persists. It can be seen in the constitution and in the ownership of the nation’s wealth. 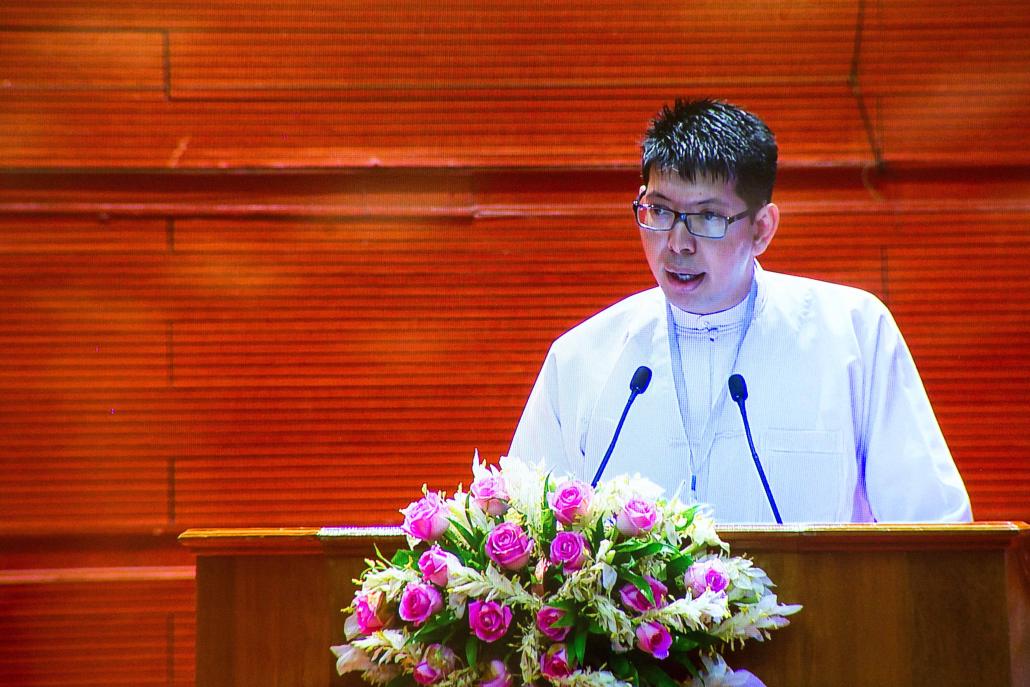 U Min Zin delivers an address on September 2, the third day of the Panglong Conference. (Theint Mon Soe — J / Frontier)

In the current situation, it is essential that the democratic transition not be derailed. It is on the right track now. We can choose our rulers. We have democratic rights. It is important. Ethnic affairs, federal affairs and union building are all important as well.

Another is military-civilian relations. Food, shelter and clothing for everyone are important, too. Frankly, the country has a problem with a lack of justice and fairness. The gap between the rich and the poor is frightening.

The poor are becoming poorer. We need to consider [all of these] important things, including poverty. If we focus on one, the others risk becoming uncontrollable.

If we focus on federal affairs in the peace process, tension between the military and civilians will probably increase and pose a threat to the democratic transition.

If we talk about peace all the time without paying attention to poverty, problems will arise because of skyrocketing commodity prices. Crime will be rampant.

Peace is the most important thing because it is involved in building a federal union. But if all the resources are directed towards the peace process, it will be a problem. Every nation becomes unstable if poverty is rampant. If there’s instability it will result in a strengthening of the security forces.

How should these various challenges and obstacles be overcome?

Building a new union is very important but the main problem is ending conflict. A ceasefire and ensuring no new armed groups emerge must be priorities.

It may not be possible to build a new union while Daw Aung San Suu Kyi is in power, but she will lay the foundations.

What kind of foundations should Daw Suu lay?

It is obvious that she is not able to lay any foundations now. After resolving the conflicts, there needs to be regular discussion about how to create a new union. For example, the NCA emerged under the U Thein Sein government. It was not perfect but it was a starting point.

While Daw Suu is in power, she can create the starting point for a charter to build a new union. It will be important if she establishes a precedent for holding a repeated series of meetings.