Although malaria infections continue to fall, Myanmar and its neighbours remain a breeding ground for new and dangerous strains of the disease.

IN MYANMAR, malaria is a quiet menace. The country has one of the highest malaria infection rates in Southeast Asia, but the disease rarely manifests in overcrowded clinics – and certainly not the millions of deaths seen in Sub-Saharan Africa.

Rather, it slowly festers within overlooked populations: in illegal teak logging camps, squatter cassava farms and remote army outposts. And then it morphs into powerful new strains that can cross the globe and resist the latest and most effective medications.

Although new malaria cases have dropped in the last decades – Myanmar’s National Malaria Control Programme reported a 49 percent drop in annual malaria parasite incidence since 2012, and a drop of 62 percent in malaria morbidity rates  – the Greater Mekong Subregion remains a notorious breeding zone for drug-resistant parasites.

Myanmar, which had an estimated 250,000 cases in 2015, now rivals Cambodia in the rise of drug-resistant malaria strains. According to the World Health Organization, “credible evidence” of malaria strains resistant to the most powerful antimalarial drugs has been found in Tanintharyi and Bago regions, and Mon, Kayin, Kayah and southern Shan states.

“Somehow [the Greater Mekong] region breeds resistance, and we don’t really understand the epidemiology,” said Ma Sandii Lwin, managing director of the Myanmar Health and Development Consortium, who formerly worked for the Global Fund to Fight AIDS, Tuberculosis and Malaria.

In the 1950s and 1960s, the first resistant strains to antimalarial chloroquine arose in Southeast Asia, Sandii Lwin explained, and spread to Africa and South America. As a result, the once-ubiquitous drug became all but powerless to stop Plasmodium falciparum, the most common and severe malaria strain.

The global first line treatment for P. falciparum is now artemisinin combination therapy (ACT). The discovery of artemisinin was so significant that the Chinese scientist who uncovered it, Youyou Tu, was jointly awarded the Nobel Prize in Medicine in 2015. It is now used in combination with drugs such as piperaquine and has dealt a dramatic blow to malaria worldwide.

However, ACT has a serious drawback, Sandii Lwin explained: “There is no second line defence.”

In other words, there is no effective alternative should artemisinin-based therapies go the way of chloroquine.

Thus, when the first ACT-resistant malaria strains began to appear on the Thai-Cambodian border, Southeast Asia became ground zero for a desperate international medical struggle against the disease, even as the region’s actual malaria cases fall.

In 2014, the Global Fund launched an Emergency Response to Artemisinin Resistance, allocating US$124 million for emergency containment efforts against drug-resistant malaria in Myanmar, Thailand, Vietnam, Laos and Cambodia – an “unprecedented level of funding for a single regional grant”, the organisation said.

Part of what makes the Mekong region such fertile ground for new malaria strains is that its populations tend to move around.

More than 100,000 workers from Myanmar and Thailand moved into Cambodia’s western Pailin province during the “Ruby Rush” of 1988-1992. A WHO report, Malaria in the Greater Mekong Subregion, explains that when the workers returned, the disease travelled with them. Local hospitals and clinics in the Tak region on the Thai-Myanmar border estimated that 80 percent of their infections originated in Cambodia. 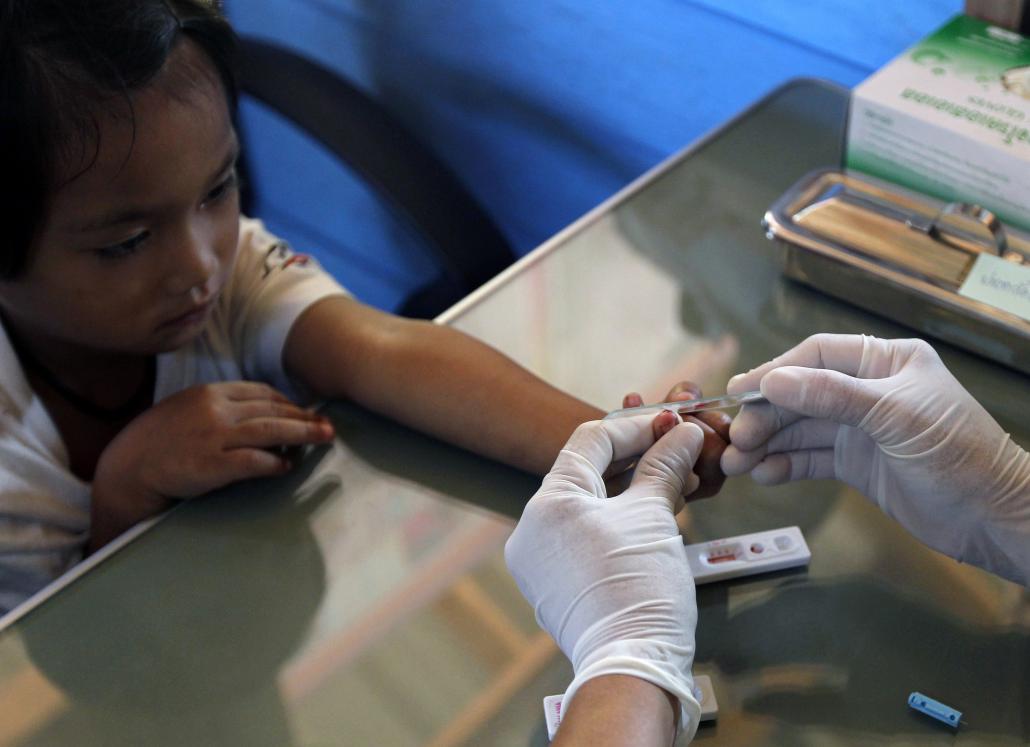 An ethnic Kayin child is tested for malaria at a clinic in Tai Muang, about 10 kilometres from the border with Myanmar, in Kanchanaburi province, in October 2012. (EPA)

Today, Tak still hosts tens of thousand of refugees and hundreds of thousands of Myanmar migrant workers, many of whom cross the border regularly and informally.

But it’s not just migrant workers – military personnel are also often affected by malaria, Sandii Lwin said. “They [soldiers] spend a lot of time in the forest. You’ve got heads of state saying they are going to eliminate malaria, but they don’t even give their own military nets and drugs.”

Not only are these populations mobile, but they also tend to live and work deep within forests and jungles. This makes them extremely difficult for healthcare professionals to access.

“The last person with malaria in this region will be illiterate, poor, from an ethnic minority, living near a forest and doing something illegal,” said Mr Louis Da Gama, a member of the Regional Artemisinin-resistance Initiative Steering Committee. “So how do you reach that person? And how do you reach hundreds of thousand of them?”

The malaria key populations – those in which the disease is most prevalent – include poachers, illegal loggers and remote farmers, many of whom spend several months at a time deep in the wilderness.

People in these communities tend to be wary of the public healthcare system, choosing instead to self-medicate. “They aren’t likely to rush up to a government hospital,” Da Gama said.

They often begin taking medication far too late and stop taking it prematurely, either because they begin to feel better or simply do not have enough pills. It is this behaviour that helps drug-resistant parasites thrive.

Furthermore, Da Gama said, the most vulnerable populations can also be the most overlooked by the government. “There are huge political issues at stake here when you’re talking about illegal migrants,” he said.

That doesn’t mean the Myanmar government is not motivated to combat malaria in rural areas. Dr Khin Maung Wynn, project manager for the Myanmar Council of Churches Malaria Prevention (MCCMP), said that the government has devoted considerable resources towards malaria services in every township.

In lieu of institutional resources, it partners with organisations like MCCMP to facilitate peer-to-peer healthcare in remote communities. MCCMP, which operates in Chin State, Kachin State and parts of Sagaing Region, trains volunteers from remote villages to educate their community and test people for infections.

Khin Maung Wynn said that malaria rapid diagnostic tests (RDT) are so simple that even someone illiterate could conduct the test.

“[The volunteers] teach the community about the causes of malaria, how to seek treatment systematically, how to not seek treatment with quacks,” he explained.

MCCMP’s positive test rate for malaria has dropped from 50 percent when the organisation began operations in 2007 to less than 10 percent, he said.

Khin Maung Wynn’s organisation does not operate in areas at high risk for new malaria strains. But its work illustrates how difficult it can be to combat the disease in Myanmar’s rural communities. He said that even after 10 years of operations, some villages have proved all but unreachable. These places might be no more than 30 kilometres from the nearest town, but are inaccessible even by motorbike.

In those areas, “People still think they get malaria by eating bananas, by drinking stream water and sometimes by going into the forest, [where animist] nat [spirits] give them malaria,” he said. “So if you have fever you offer something to the nat. That is the tradition.”

Even if they do seek treatment, it might be with “quacks”, as Khin Maung Wynn calls them, who either give them the wrong medication or incorrectly administer the right ones.

He isn’t worried that new strains growing in other corners of Myanmar will undo a decade of work. The disease might be immune to certain medication, but not an educated populace that knows how to identify, treat and ultimately contain the disease.

The communities Khin Maung Wynn works with “are not afraid”, he said. There are enough doctors and volunteers with access to enough diagnostic kits and artemisinin combination therapy to fight the disease.

And the drugs are working – at least for now.