Diminishing returns are making the hard lives of artisan miners even harder in some areas of central Myanmar, where traditional methods of mining for oil have existed for centuries. 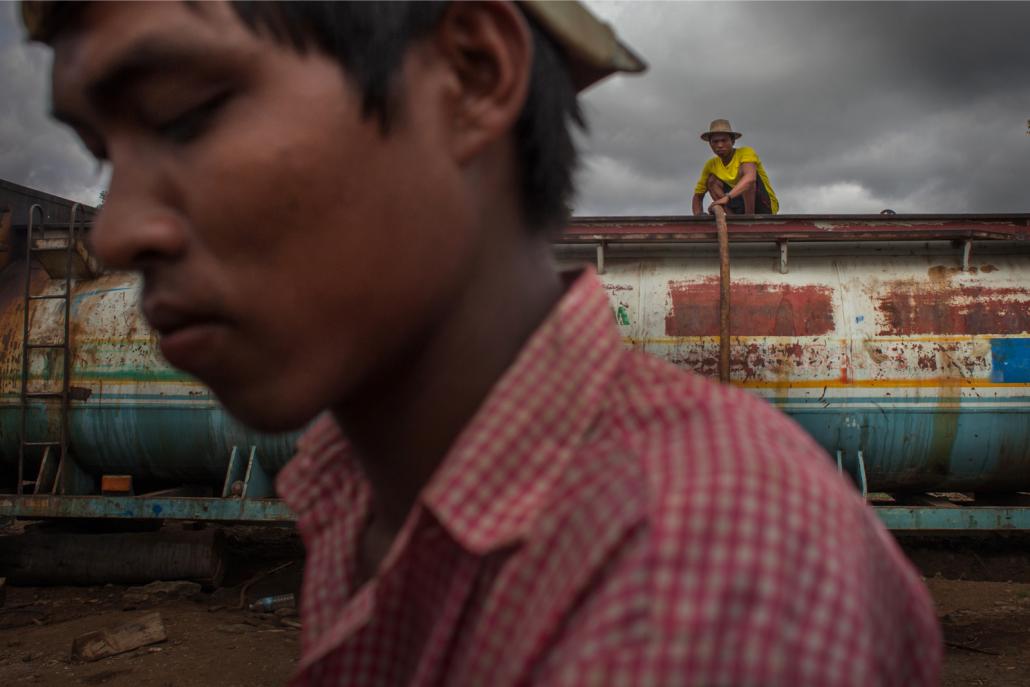 Mining for oil with wells sunk by hand has been a feature of the area around Yenangyaung in central Magway Region for centuries.

There is evidence that the indigenous oil industry in Yenangyuang region may have been the world’s largest in the early 19th century. Initially, oil was harvested from seeps and soaks throughout the region’s scrub-covered rolling hills but as the industry developed, wells were drilled manually in the oil-bearing earth near Yenangyaung, “the creek of stinking water”.

The Burmah Oil Company, which dominated the industry in Myanmar during the colonial era, began producing oil at Yenangyaung in 1887. Other companies, big and small, have since drilled for oil or taken over existing wells in the areas around Yenangyaung and at Chauk, a field discovered in 1901. They are among seven oil fields in Magway Region.

The indigenous industry received a boost after the government granted permission to explore for oil in the region in mid-1990s and many poor but hard-working farmers seized the opportunity to begin digging for the black gold.

In the preceding decades, some residents had been evicted from their land to make way for big companies. Diminishing reserves created extraction challenges and the exhaustion of oil from some areas saw sites abandoned and the land was returned to its previous occupants. Some regained their land in the 1990s, others only a few years ago. 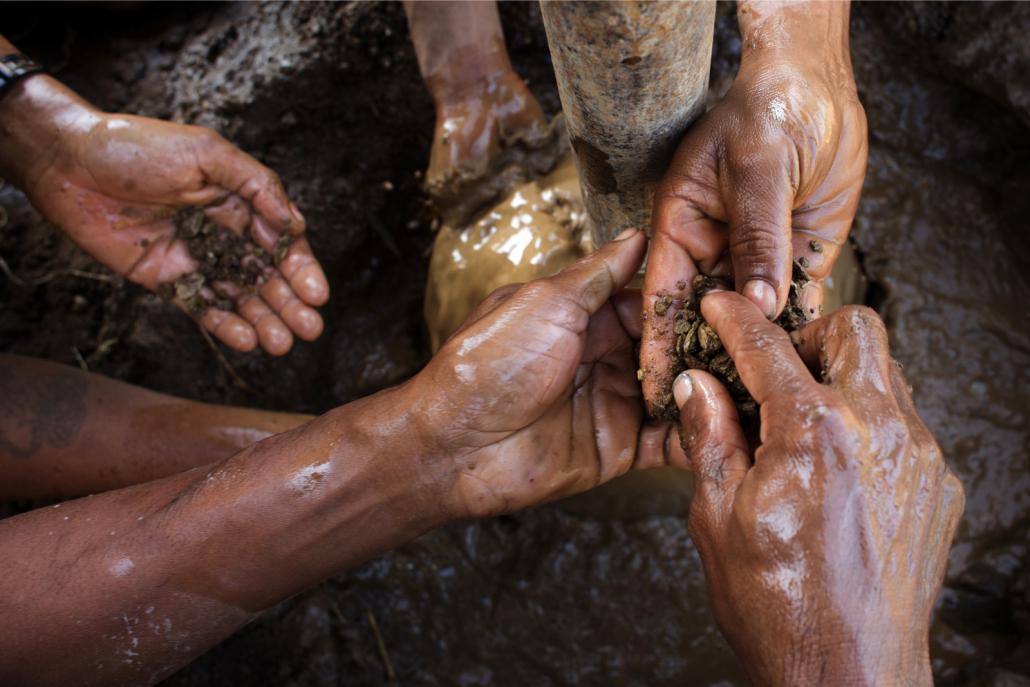 “Life is 100 per cent better than before,” said U San, who lives near the oil fields and whose land had been confiscated by a government-private sector joint venture about 20 years ago. “We worry that they will come back; if they don’t come, we are happy,” said U San, referring to oil companies.

The big companies that exploited the fields for decades drilled to great depths, but the simple rigs used by traditional miners only drill to about 300 feet.

The traditional miners have transformed this region of the “central dry zone” into a landscape conspicuous by their presence, a strangely-structured chaos of drilling rigs, pipes, barrels and simple bamboo and palm-frond huts. As the drills penetrate the earth, the miners monitor the soil samples for a blue colour, which is an indication of the presence of oil.

Land owners ask traditional miners for a share of their profits, usually 20 to 25 percent.

“For every five barrels, I have to give one barrel to the owner,” said Ko Maung Hla, who produces about one barrel of oil a month from his 20 wells. The bright-eyed young man sat with his wife and two-year-old son on a bamboo mat outside their simple home, while a rare breeze carried the pungent smell of oil. 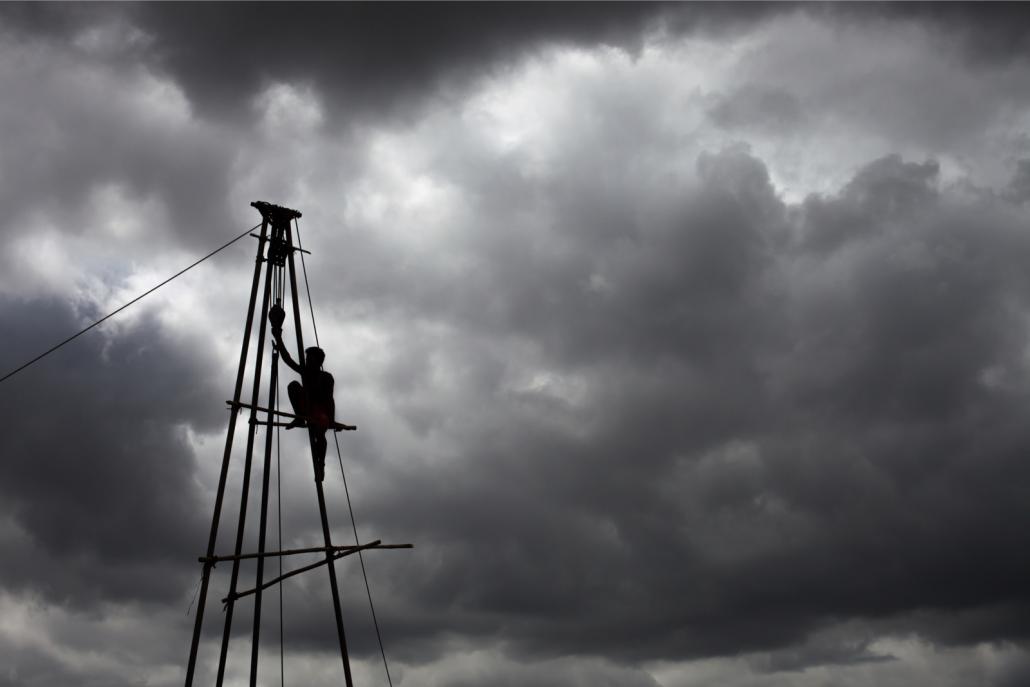 A new era has been taking shape in the oil and gas sector since the change of government in 2011 because the easing of sanctions by the United States and European Union has paved the way for the return of some of the world’s biggest Western hydrocarbons companies. Since 2013, the government has awarded a total of 36 offshore and onshore blocks to 46 foreign and Myanmar companies.

They include such oil majors as the Anglo-Dutch firm, Royal Dutch Shell, Chevron from the United States and France’s Total, which was already involved in Myanmar as the operator of the Yadana offshore gas field and pipeline. The Ministry of Gas and Energy signs production-sharing contracts with the winning foreign companies and their Myanmar partners.

Before sanctions were lifted, the main investors were Asian companies, especially from China, India and Thailand. One of the biggest hydrocarbons infrastructure projects in Myanmar is the 480-mile (770km) dual pipeline that transports gas and oil from a terminal at Kyaukphyu on the Rakhine State coast to Kunming in China’s Yunnan Province. The China National Petroleum Company invested US$2.5 billion in the project, which was completed early this year when the oil pipeline went into the operation. 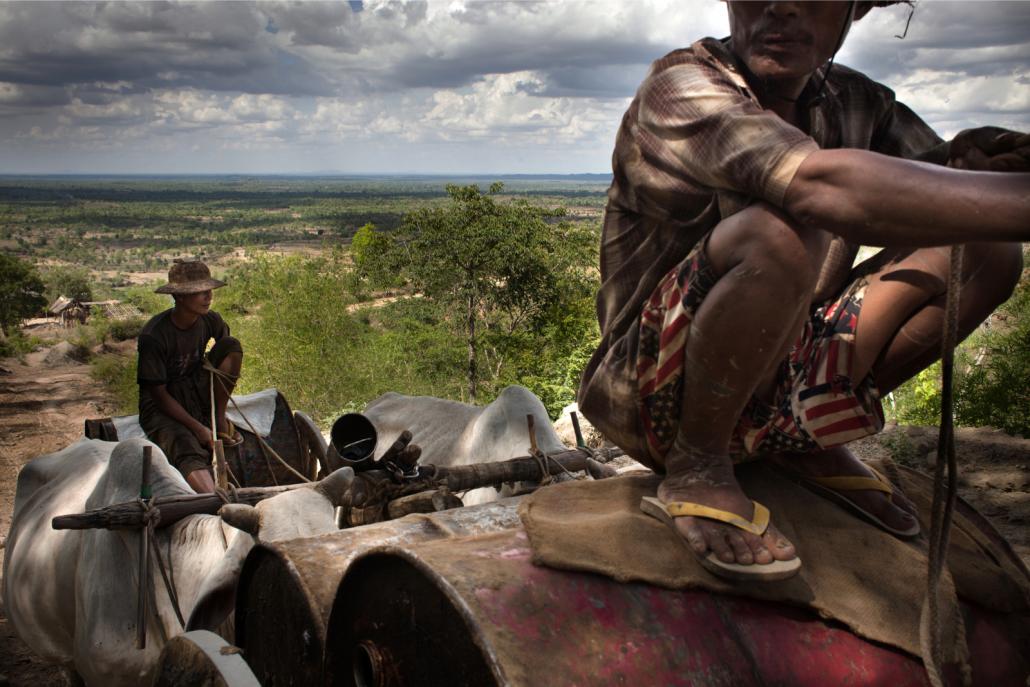 The gas pipeline has been supplying China from the Shwe field off the Rakhine coast since July 2013. Ironically, many villagers living near the oil terminal, through which more than 20 million tons a year is being transported to China, have no electricity. The project has also fuelled conflict between the Tatmadaw and ethnic armed groups active in areas along the pipeline and forced evictions have been rampant.

Meanwhile, reserves at some of the oil fields in Magway Region are beginning to dry up. Ko Hlaing Moe Tuu, who makes a living transporting crude oil, said he is earning only 25 percent of what he was making a year ago.

“Before I made trips twice a day, now only about 15 trips per month,” Ko Hlaing Moe Tuu said. Landowners are also expressing concern about a decline in oil revenue, that they said was sometimes as much as 85 percent.

As the fields become exhausted, the fortune seekers will try their luck elsewhere, leaving a legacy of empty wells that once fed their families. Some have moved to oil fields elsewhere in the country, where they have heard about new discoveries.

“We need to listen and then we will follow the oil,” one of the oil drillers said.