Military raids, an internet blackout and other challenges have not prevented the opening of schools under the National Unity Government in villages throughout Myaing Township.

This week, as schools reopened across Myanmar, the military regime declared that students are “happily and peacefully” studying at junta-run schools in the cities that are largely under its control, like Yangon, Mandalay and Nay Pyi Taw.

However, a different story is unfolding in the country’s central Dry Zone, where armed resistance to the 2021 coup has been particularly fierce. In Myaing Township in northern Magway Region, dozens of schools have opened under the authority of the National Unity Government, a cabinet appointed by lawmakers elected in the 2020 polls which the military refused to recognise.

As civil servants hamstrung the regime via the mass strike known as the Civil Disobedience Movement, the NUG has moved in to try to replace some essential state services. While the process has been slow, there are glimmers of a breakthrough in Myaing Township, where the NUG’s education board said more than 70 of the 265 government schools have reopened under its control.

“We know that more than 70 schools have opened in Myaing Township, but only 69 have sent information and the exact number of teachers and students is known for 64 of them,” Ko Aye Min Win told Frontier last month. Aye Min Win is a teacher and member of the NUG’s township education board.

He said there are 11,333 students enrolled, 65 percent of which are attending schools, while the rest are being taught with NUG materials in monasteries and private homes. The students are taught by 352 CDM teachers assisted by 872 volunteer teachers.

The Myaing Township Education Board was founded with 39 members in September 2021 after the NUG’s ministry of education called for boards to be founded in every township in May of that year. The first schools were opened in October.

The board says it operates under the collective leadership of CDM teachers, parents, students and civil society group members. It does not accept CDM teachers who tried to return to work for the regime, or volunteers who applied to work at schools under military control.

“I have heard that a school has opened under military control in Myaing town, but I don’t know for sure,” Aye Min Win added.

The military claims that over 355,000 students are enrolled in its schools across Magway Region but did not provide township-specific figures. Frontier could not independently verify this number. Junta spokesperson Major General Zaw Min Tun told a news conference last month that around 5.2 million students were enrolled across the country, roughly half of the pre-coup total, but not every student who enrols actually attends classes.

Schools were closed for over a year due to the COVID-19 pandemic. They remained closed following the chaos of the coup, and have continued to suffer from the mass strike of teachers and students.

During a public address on March 23, NUG education minister Dr Zaw Wai Soe sought to reassure parents whose children are missing out on education due to the boycott.

“Parents should not be worried that other children would pass many grades because they are attending schools operated by the military council. In fact, grades mean nothing if the children do not have the skills they need according to their age,” he said.

The NUG curriculum is based on the pre-coup national curriculum.

“The NUG did not change the curriculum,” said a middle school teacher from Taw Ywar village. “The main intention is to distribute teaching materials to students in areas where schools are not open yet due to the revolution. But at the NUG schools, which are now open, we teach by textbooks and also watching and learning from videos released by the [NUG education] ministry.”

He said when students are unable to physically attend classes, they can still watch the videos.

“It is easy to understand just by watching the video without a teacher… the students can understand the main purpose of the lesson,” he said.

Teaching classes in a warzone is not without its security challenges. Following the military’s brutal crackdown on peaceful protesters, many opponents of the coup embraced armed revolution, forming People’s Defence Forces.

Magway has emerged as a PDF stronghold, with anti-coup armed groups frequently clashing with the military and assassinating local regime officials. The level of resistance has prevented the junta from rolling out its administrative functions, allowing parallel structures to emerge.

A member of a PDF group in the township said armed guards are stationed at the schools and outer checkpoints to warn civilians if the military approaches and provide protection if necessary.

“We help the people and children to flee if the military comes. The cooperation of township residents is good,” he said.

Aye Min Win said if the military approaches, they temporarily close the schools and then “reopen them when the situation is secure”. He added that schools are only operating in villages where PDFs can provide protection and where pro-military Pyusawhti militias are not present.

“Schools are usually guarded by PDF fighters, but we encourage local residents to help guard the schools because the PDF forces also have to fight for the revolution. We don’t want to reduce the strength of the PDF,” he said.

Residents have had to frequently abandon their villages when soldiers approach, only to return after they leave. But teachers in the township said the careful security precautions means they’ve never had to flee during classes.

Daw Nwe Ni Kyaw, a volunteer teacher, said the presence of security guards near the schools was reassuring, although she still worries about what would happen if soldiers arrived in the middle of classes.

“If we had to run away, it would be difficult to flee together with kids. We worry about that,” she said.

“We have to run every time we hear that military forces are coming. This has caused disruption and teaching could not gain momentum,” she said.

The father of an eighth-grade student said it was trust in the NUG and the attention paid to security that had persuaded him to allow his daughter to attend school.

“I had to give a lot of thought to whether I should send my daughter to the school. As the NUG is providing education by forming a ministry and education boards, I had to trust them. As security is assured by the PDF and the local people working together, I am not so worried anymore,” he told Frontier.

In areas without a strong PDF presence, rolling out parallel education systems is nearly impossible. A head teacher from Bago Region’s Pyay District told Frontier she tried to teach her students in secret after joining CDM but was forced to flee the country in April when she was exposed. Bago Region has seen limited armed resistance to the junta, except in areas where the Karen National Union operates.

“My friend was arrested and from this case they found out about my secret school,” she said.

After teaching for eight years, she quit in protest of the coup, but found it was nearly impossible to get another job.

“I applied for many jobs but when they found out I was CDM they were too afraid to hire me,” she said.

Education board member Aye Min Win said the teachers are not yet being paid formal salaries.

“The NUG has not supported us with salaries for teachers,” he said, claiming the parallel administration is still contending with budget shortages. “We have been honest with the teachers and have told them that we could not give them salaries yet,” he said.

Before she left her previous job as a civil servant to join the CDM, Nwe Ni Kyaw was earning K180,000 per month, around $100 at today’s conversion rate. In the absence of a formal salary system, teachers are dependent on grassroots support, with township residents donating to schools and financially supporting teachers.

Thuzar Myint was earning a salary of K270,000 per month prior to the coup, but said she is willing to persevere “to the end” without pay. She said teachers in the township who had joined the CDM had decided to participate in the NUG’s education programme regardless of whether they received salaries because they wanted children to receive an education.

“We are worried about the children. It is now over two years that they have not attended schools. They no longer have the spirit of a student. We are doing our best,” she said.

The teacher from Pyay said her students’ families tried to support her, but they were also afraid. “Some of my pupils left a little money, some just gave food. They were afraid to be seen as funding CDM,” she said.

An internet blackout imposed by the regime on Myaing Township since September 2021 has also hampered the distribution of NUG education materials, including more than 3,300 videos released to support the curricula of all grades at basic education schools.

In the western part of the township, even cellular phone connections have been cut since May 19 this year as rampaging junta forces roam in the area.

“It would be more convenient if we could have the videos released by the NUG education ministry. Myaing Township Education Board is sending some of the videos, but we do not have all of them,” said Nwe Ni Kyaw.

Aye Min Win explained that another board member travelled to other areas with internet access in order to download some of the videos. He said that despite the challenges, the tentative success of the education programme had convinced the board to open more schools.

“We are consulting with villages in the township to see if they support the opening of a school. We are planning to open more schools this year, but I am not sure how many will open,” he said.

However, military operations since mid-May have disrupted these plans in some villages.

“We were planning to open a school in our village with the guidance of the NUG in June, but we do not know whether that will be possible now because we are on the run,” said a resident of Taw Ywar village.

In his address, Zaw Wai Soe said the NUG is in it for the long haul. “We are not aiming for the next few days but for long-term education in the country,” he said, adding that the NUG is seeking a total revolution of education in Myanmar.

“Slave education… is simply intended to produce graduates who are just able to do what they are asked, without thinking,” he said. “We will abolish this sort of education and replace it with one that makes the students able to think for themselves.”

The father of a grade 10 student in Hnunsarkyin village said he had faith in the NUG’s plans.

“They will bear fruit in the future.” 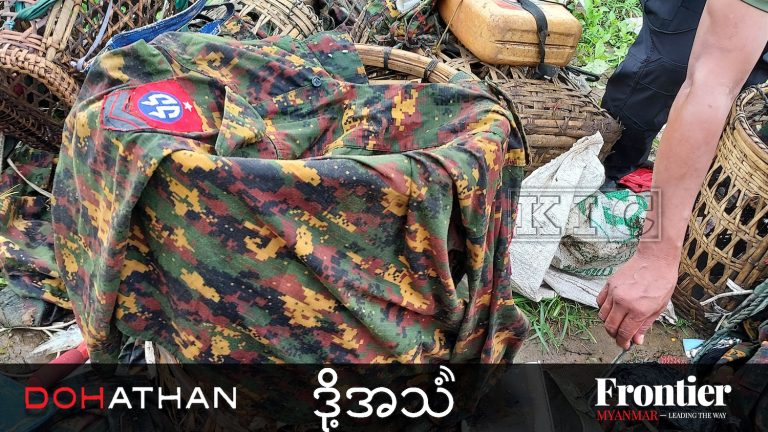 Army defectors say internal abuses within the armed forces could backfire on the regime.
BY Frontier